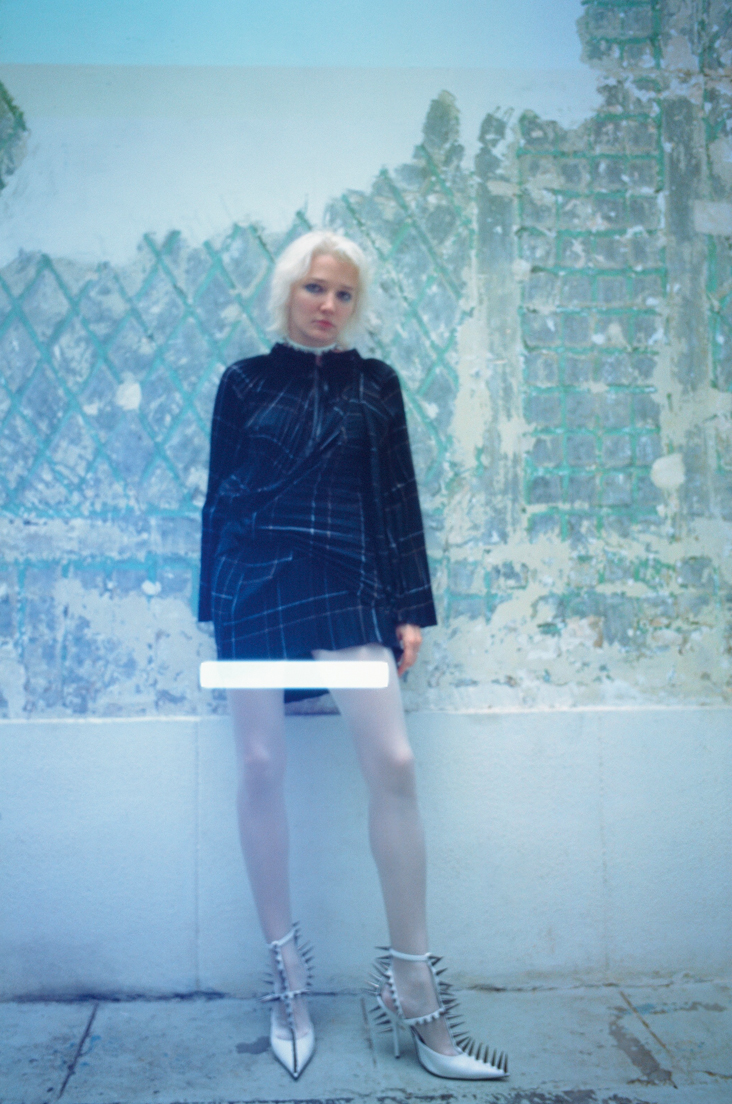 ALBAN ADAM — I don’t think we’re going to do that kind of interview where we talk about your origins. We know you were born in Vladivostok and then moved to London, did Central Saint Martins, and so on. I think everyone knows, and if they don’t, they can Google it, right?

LOTTA VOLKOVA — Yeah, I’m pretty sure you can find it all on Google.

ALBAN ADAM — For sure! Let me jump right in with the interview and ask you: what is your opinion on the fashion world — as a system, as a world of creativity, and as a business?

LOTTA VOLKOVA — I’m not really interested in fashion itself. I feel that I’m just lucky to be able to do what I want to do, and be accepted and rewarded for it, but the best point about me, I believe, is that I look
outside of fashion. So, it’s about culture for me, integrating it in my work.

ALBAN ADAM — And art? We see a lot of fashion designers collaborating with artists and blurring the lines that separate the two worlds. What is your relationship with art?

LOTTA VOLKOVA — Well, I actually studied fine arts, and that, somehow, set the way I think in general — experimenting, mixing references, and just kind of subverting everything, even if I hate that word so much.

ALBAN ADAM — Who are the artists who inspire you?

LOTTA VOLKOVA — The art I like is very immediate. It has a clear message and a strong impact. It talks to you without you having to research deeper into it. I like Paul McCarthy, Anne Imhof, Alexandra Bircken, Franko B, Vito Acconci, a lot of ’70s performance art, the cinema of Jack Smith, the Cinema of Transgression…

ALBAN ADAM — I know how much you love Paul McCarthy’s work. Why is that?

LOTTA VOLKOVA — It’s animalistic, brutal, direct, raw, and powerful. I find that the ideas he explores in his work create an energy you can feel at first sight. No need to read anything about it — it just comes at you at once, spits in your face, and declares its existence, whether you like it or not. It’s very punk rock! Recently I went to see the William Forsythe installation at the Gagosian gallery in Le Bourget near Paris. It was one of the most breathtaking experiences! Two giant robotic arms operating black flags. What fascinated me was that at first they operated in a synchronized movement, but then gradually the rhythm breaks down, and they almost fight against each other, then gradually get back to being synchronized. For me, it was about the power of duality, rebelling against each other to finally find a new unity.

ALBAN ADAM — This concept of working together, synchronized, as a group, is something that is very relevant in the fashion industry these days — the idea of the tribe managing to reach success as a group. What’s your take on it? Is that your recipe for your success in this industry?

LOTTA VOLKOVA — This is how people like to categorize things. One person’s work, however good it is, can easily be dismissed, but with a group, a tribe behind you, the message becomes stronger. Ideas also tend to feed off each other, and the strength of the group as a collective is easy to translate into trends.

ALBAN ADAM — What are the downsides, then?

LOTTA VOLKOVA — The problem can be that you are put inside a box, and the differences and nuances are overlooked to fit that box, which can be frustrating. It’s easier to generalize, but I still believe individuality is what pushes things forward.

ALBAN ADAM — With success, people tend to want to see only that one thing they liked and nothing else, so evolution is difficult. How do you see that?

LOTTA VOLKOVA — Oh yeah, totally. For me, it’s just about doing what you really want, no matter what. Sometimes you’ll get negative reactions, sometimes positive responses, but it doesn’t really matter as long as you feel that you are doing the right thing, and you are comfortable with yourself and your work.

ALBAN ADAM — So, you don’t care about what people say? You must care a little bit, no?

LOTTA VOLKOVA — I mean, of course, if it’s successful, it’s better for everybody involved in the project. Personally, I’m pretty content doing things the way I want, in a pretty uncompromising way. I guess I have quite strong aesthetics. People either hate it or love it, but I’m very comfortable with that!

ALBAN ADAM — Your work brings on quite intense reactions, then?

LOTTA VOLKOVA — There are a lot of magazines these days, a lot of people working in the industry. I feel my role is to talk about something different, to show another side. When you flip through a magazine, you want to go, like, “Oh, what’s that?” and look back. You want to be surprised. I want to create something that people will try to know more about, and then they can love it or hate it. My work is very personal, and I’m very comfortable with all of it. I’m not trying to do something disturbing or revolutionary. I love underground cultures and talking about different fetishes, the dark side of the human mind, different types of lifestyles. I’m interested in something that’s not conventional and not casual!

ALBAN ADAM — Not casual for sure!

LOTTA VOLKOVA — Yeah, I don’t do casual. We all know that by now. [Laughter] I want to show another side of life, how some people are into wearing clothes because of how it makes them feel, because it gives them pleasure, showing the alternative side of things, introducing the alternative into the mainstream.

ALBAN ADAM — How about the role of Instagram in all this? How do you use it?

LOTTA VOLKOVA — I saw the Stephen Shore retrospective at MoMA [Museum of Modern Art, New York] the other day, and I love his awareness of social media and how he uses Instagram as a tool.  “Paying attention all the time is an interesting way to go through the day,” he says. I guess I pay a lot of attention. It’s about being alert, a way to stay connected and pay attention to the moment of “now.” My Instagram is very personal. It’s about what I love and what I’m obsessing about. It’s not like a master plan putting together a secret agenda, not at all. It’s super-spontaneous. The only thing I think obsessively about is the flow and color coordination! If I think too much about a post, then I don’t like it and — delete!

ALBAN ADAM — Is this how you work with your styling? How do you put together stories? What’s the starting point?

LOTTA VOLKOVA — It’s pretty different all the time. If we start with a photographer, it can be about interpreting their work in the way that I am personally interested in. If it starts from a theme, I like colors and textures and creating parallels between clothes and ideas. It definitely starts from ideas, and the clothes come in afterward. I never really prepare looks in advance. I love to do it on set — it’s something very immediate for me. It’s about a moment, an energy in the space with the photographer and the model. Of course, I have an idea of what I want to do, but there is a big part of chance and possibilities to change things. I like it to be immediate and real. I never have a plan because plans never work out, at least for me! So, I have to make things work in the moment.

ALBAN ADAM — Living in the moment, always. How is your day-to-day?

LOTTA VOLKOVA — I do work all the time really. Whenever I’m in Paris, I work. As soon as I have some time off, I just take a plane, and I go somewhere, to meet my friends, to shoot, to go on an adventure. I’m pretty restless.

ALBAN ADAM — From your Instagram, I can see you have been in the United States a lot. Why is that?

LOTTA VOLKOVA — I love adventures! I guess I watched too many American movies when I was little. I love going to uncommon remote cities or villages stuck in a different time, putting yourself in strange situations, meeting people you wouldn’t normally meet. It also comes from my passion for music, and especially heavy metal. I want to live like in one of those songs — lost in nature, on the road, motorbikes, denim, lace, and leather. [Laughter]

ALBAN ADAM — Nature? I know you as a city person, though…

LOTTA VOLKOVA — It’s very strange, but I found a love for nature recently. When I was younger, I hated it, though I was surrounded by it — the sea, the ocean, the mountains, and wildlife. I always wanted to leave it for the big concrete cities. But recently I’m enjoying going back to nature. It’s about complete freedom, being away from everything, being such a small element within the universe.

ALBAN ADAM — Maybe it’s your reaction against the fashion system?

LOTTA VOLKOVA — Maybe it is, yeah, being anonymous and free — it’s the ultimate luxury, no? I guess it’s a little romantic, as well. I guess I’m a romantic, after all!