all images copyright of jr-art.net and Adagp, Paris, 2017 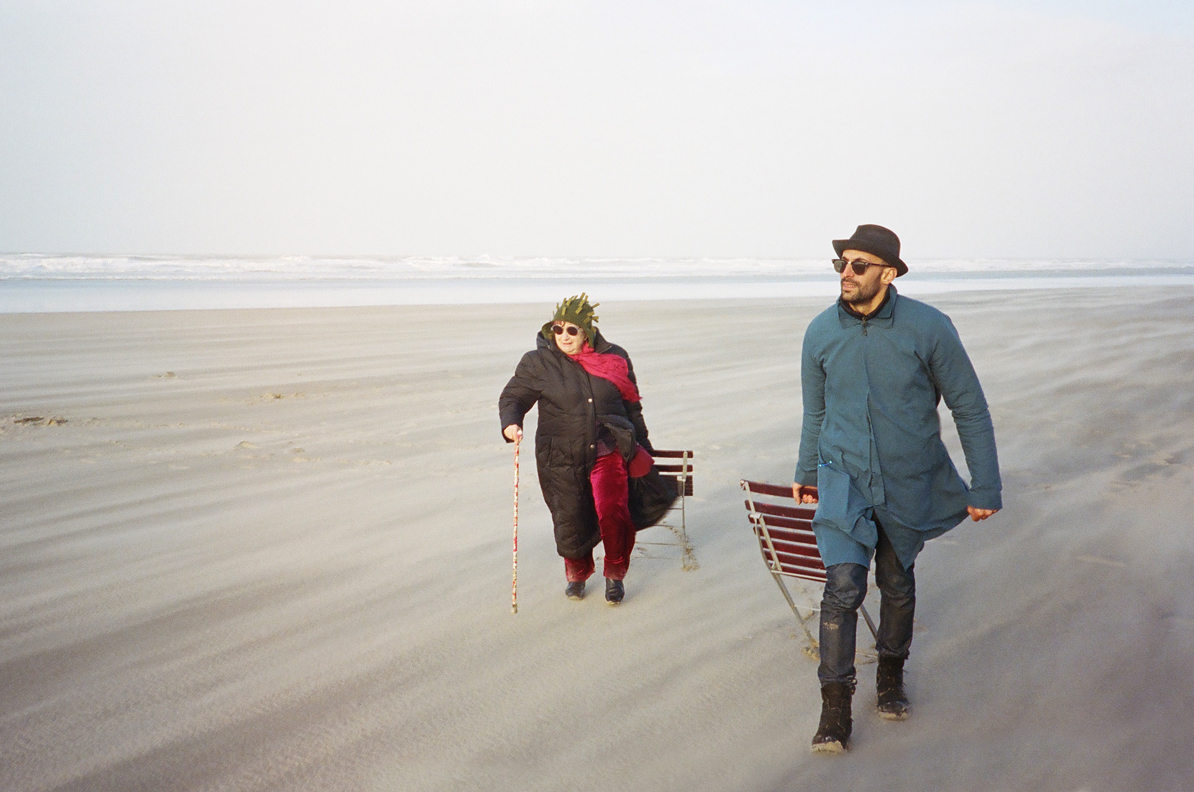 AGNÈS VARDA AND JR IN NORMANDY DURING THE SHOOT OF THEIR FILM FACES PLACES, COPYRIGHT AGNÈS VARDA-JR-CINÉ-TAMARIS, SOCIAL ANIMALS, 2016

OLIVIER ZAHM — My first question is about your empathy — you’re constantly connecting with people in a very joyful and positive way. Are you the last optimistic person on this planet?

JR — [Laughs] I would say that there are enough pessimists. It’s quite original to be optimistic! And as artists, if we lose the utopia of constant optimism and possibilities, then who else is going to take that stand? No matter what, I’ll always stay an optimist and an utopist, because if we, as artists, lose that, the world is lost.

OLIVIER ZAHM — I agree. But can an artist save the world? Or make it a better place?

JR — I don’t know, but I think the artist is always there to raise questions. And that’s why whenever there’s a new dictatorship or an unfair law, artists are the first to be targeted. We’ve seen this happening in a lot of ex-communist countries or dictatorships, so it shows the power of the artist. Dictators fear artists. The power of art and images is so strong that every politician and leader knows how important they are in transmitting ideas. So yes, I believe that artists have the potential to change the world.

OLIVIER ZAHM — And the power of the message: What would your message be? Is it possible to synthesize or condense in a sentence? 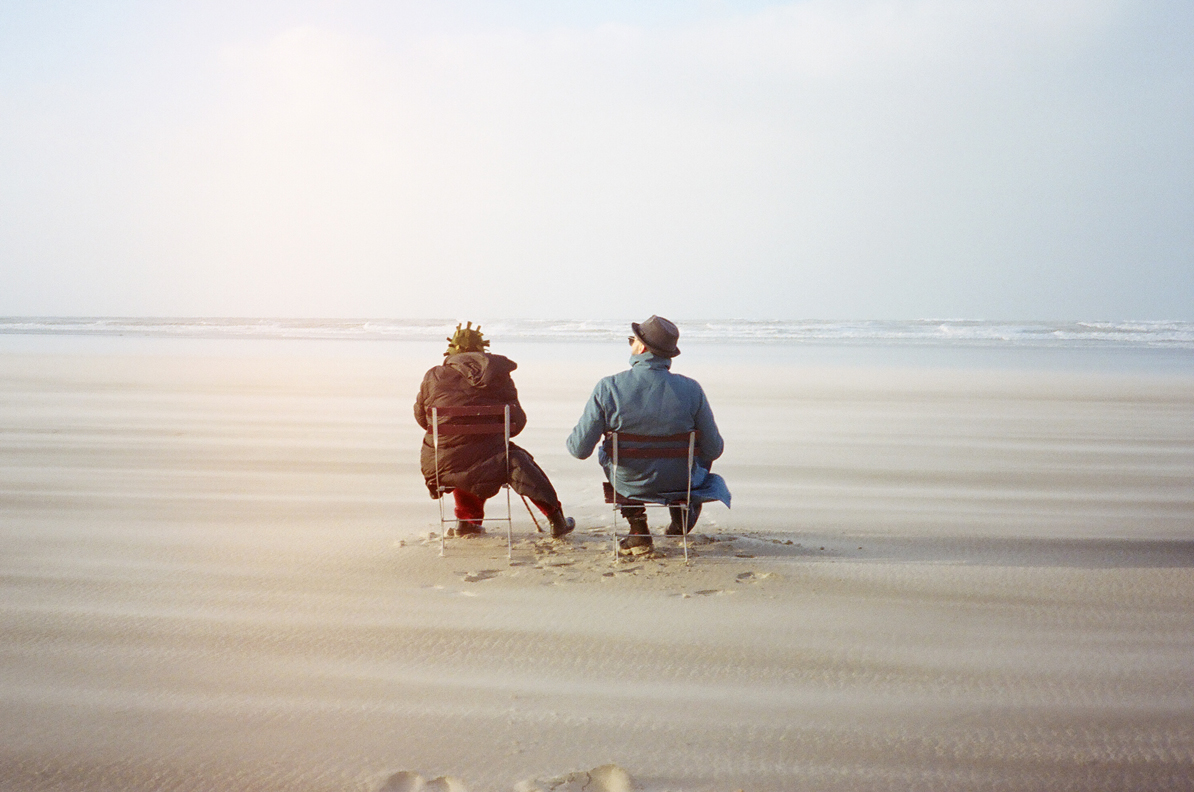 AGNÈS VARDA AND JR IN NORMANDY DURING THE SHOOT OF THEIR FILM FACES PLACES, COPYRIGHT AGNÈS VARDA-JR-CINÉ-TAMARIS, SOCIAL ANIMALS, 2016

JR — As an artist, I don’t have one message, but if I can change perceptions that we have of the world, that’s already a big step. I’m  trying to show that limits are not where we think they are… say, when I put a giant picture of a kid at the border of Mexico, everyone said, “It’s impossible, it’s illegal.” I made it happen and then people were excited to see it, and went to see, and realized that that limit can be pushed. Then, they connect with each other through the wall. It shows that the limits are not where we think they are, and that much more is possible than we think. But for that, you have to offer living proof. And often, the art piece is that living proof. Not me, the piece itself.

OLIVIER ZAHM — So, in a way, the artist creates the experience of limit.

OLIVIER ZAHM — Your work is all about this unique, original, and sometimes even political experience.

JR — Whatever the project, the ultimate goal is always to connect to people in the real world, not through social media but in the real world. When I put the picture of the kid looking over the border wall in Mexico,
it’s all over social media. But once it’s visible on social media, people go to see it in person, and are meeting people from the other side of the fence — who are also seeing it and connecting to it. 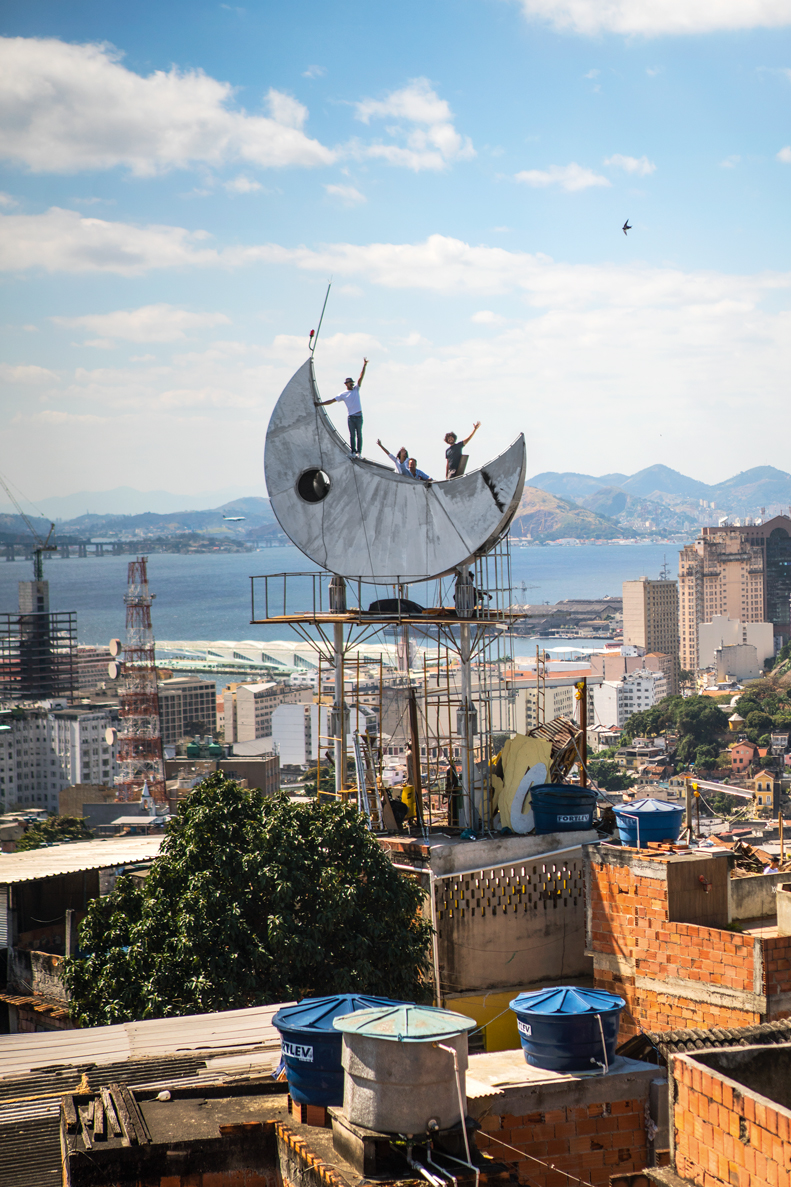 OLIVIER ZAHM — Even if it’s a small group of people.

JR — Exactly! But you know, when the border patrol agreed to share a tea with me at the border, a clear message was sent and seen by millions. It’s something that happened in the real world, but conveyed by social media. That’s how I approach art: by doing it for real, it can be passed on to the media we all use today.

OLIVIER ZAHM — By the way, speaking of the Mexican border, did you see the video installation at the Fondazione Prada by Alejandro González Iñárritu? 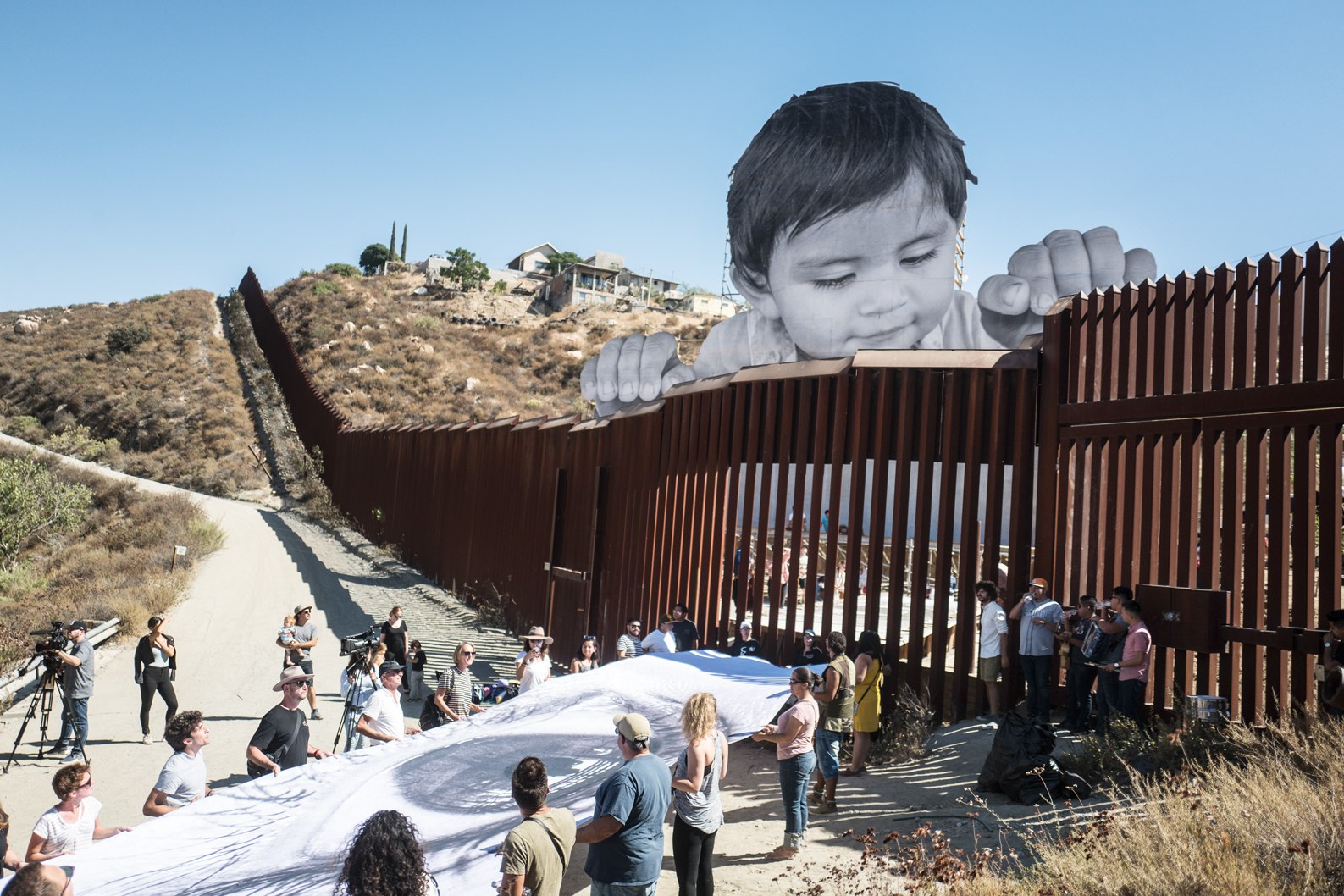 GIANT PICNIC ON THE US-MEXICO BORDER IN TECATE, CALIFORNIA, 2017

JR — Yeah, very strong, very powerful. I was really touched by this… I saw it at Cannes this year.

OLIVIER ZAHM — You’re one of the most popular artists on social media and Instagram. You have over a million followers. How do you use this platform, as a window on your work, or is it something else?

JR — Yeah, it’s a very powerful medium. In 2001, when I was 17 or 18, I was putting a photo a day on my blog; I called it “photo of the day” [la photo du jour]. I didn’t use Facebook. When Instagram started, I immediately understood it was perfect for showing the process of the work, and connecting with people, to use it as a platform for the work. So imagine, I’m in Paris, I need people, so I say “Hey guys, come and help me tomorrow at 8 PM.” People answer and send it to their friends. So now, I do fewer and fewer interviews for the media and connect directly with the audience. When I do an exhibition at Galerie Perrotin, I only use social media and let people come and see for themselves.

OLIVIER ZAHM — And no invitations anymore?

JR — Yeah, exactly. And this was Perrotin’s biggest show… the highest attendance in 20 years. 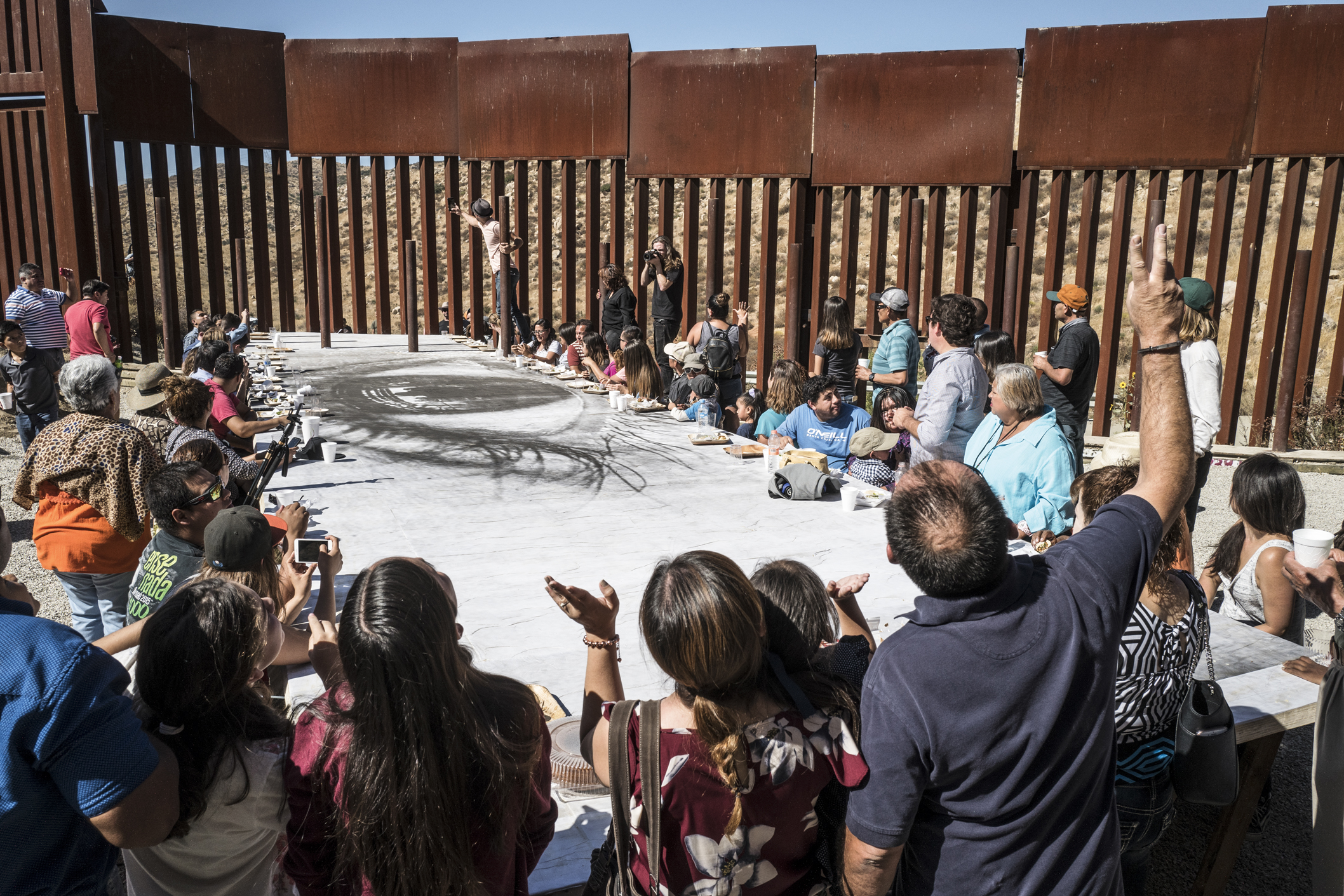 GIANT PICNIC ON THE US-MEXICO BORDER IN TECATE, CALIFORNIA, 2017

OLIVIER ZAHM — So you’re the Mick Jagger of Perrotin? [Laughs]

JR — Nah, but you know, it’s funny how, for me, social media really became part of the process. I share the research, I share the making of the piece, and then it speaks for itself. All my images are free. They’re never copyrighted; you can take them, publish them, put them on other websites. That’s one thing that’s always been important: I give my images to the people; they do whatever they want with them.

OLIVIER ZAHM — Do you also use it to find people to help, or to be part of the installation?

JR — Yeah, for sure. Especially for pasting the pictures on the wall. They come and say, “Hey, how can we help?” That’s often how we recruit. They come and they’re motivated to help and actually to make the piece… like last time, I did a show in Berlin and announced it the night before. The next day there were people coming from everywhere in Europe. Some guys came from Athens, in one night. I asked them, “How did you do that?” And they said, “Oh we took the bus for 10 hours.” And I love that, the adventure. It fascinates me. I did the same thing for Château La Coste in Provence just last Saturday. People came from all over France… and it was an amazing day.

OLIVIER ZAHM — On opposite ends of the spectrum.

OLIVIER ZAHM — Has success changed you, personally? How do you feel about it?

JR — It encouraged me to do more. First, because I stay in the shadows, so no one recognizes me when I don’t have my hat and glasses, you know?

JR — Yeah, of course! When I travel, I take off my hat and glasses. No one has ever said, “Hey, are you JR?” I’m just a random guy on the plane.

OLIVIER ZAHM — Incognito. You have a double personality. I didn’t know.

JR — Exactly. Maybe it’s the same for you. If you take off your glasses and put on a stupid cap and shave, nobody would ever recognize you. And so it’s the same for me. Then, on top of that, I try to stay out of public life, especially when I work on a piece. I do my projects in places where people don’t know me. So when I was at the border of Mexico, no one knew me until I posted on Instagram.

OLIVIER ZAHM — Have you ever been arrested or been in trouble with the authorities?

JR — Yeah. It’s happened, but often it doesn’t when I’m expecting it to. Like in Mexico, I was sure it would happen, and then, in the end, the border patrol was much nicer than I thought. And when I passed customs, I took my hat off and my sunglasses, gave them my passport, and they said, “What are you here for?” I said, “Just tourism.” They said, “What’s your occupation?” I said, “I’m an artist.” They said, “Did you come to see the photo of the little kid?” And I said, “Yes, yes, I went to see it. Very interesting!”

OLIVIER ZAHM — Speaking of your national identity, you’ve traveled everywhere on the planet it seems. Is there a country that you haven’t visited?

JR — Oh yeah, there are many! But I was in North Korea a couple of years ago. And I keep traveling, but there are still so many countries I haven’t been to yet. My projects have been to more places than I have. Through Inside Out [a people’s art project founded by JR], I send images to people around the world and they paste them up. And the posters have been sent to 130 countries. And I haven’t been to that many. So it’s amazing to think that my art has been farther than I have.

OLIVIER ZAHM — Your studio has been based in New York for seven years. Has New York changed? Do you still like it?

JR — I think it changes every year, but it keeps the same energy. The energy is there because it’s an island, you cannot extend it. In the heart of New York, there will always be a thirst to “make it happen,” because all the possibilities are there. If you’re in the middle of it, people are in a rush of doing things. They’re not waiting for things to happen. So, everyone is kind of there for the same reason. I love to be there, just to grab the energy of the place. I also go there to rest, instead of going to the beach or the mountains.

OLIVIER ZAHM — Just a word about the film you made with Agnès Varda. It’s such a beautiful thing. It’s so touching for people who love cinema, who love the Nouvelle Vague. What did you learn from her in the process of making images? Because not only are you from two different generations, but it’s also such a different cultural context. You were working with someone who was working in the ’50s and ’60s, while you started at the beginning of the 21st century.

JR — Yeah, exactly. Around 2000, when I was 17 or 18, I learned from Agnès a completely different vision and way of working. It was amazing when we were working, we forgot about our age difference. At the same time, I was much faster, I was like “Let’s do this, let’s do that.” And she was like, “Let’s stop, think, and do.” It’s really another way of working. My excitement and her wisdom made a great combination. We always worked like that: I was in a hurry, and she took her time. But at the same time, she was in a hurry, too. She always told me, “I’m not young anymore. I could die at any moment. So, I’d better hurry.” So even
when I would say, “Oh, let’s take our time to make this film,” she’d say, “No, no, no. We don’t have the time. We have to make it fast.”

OLIVIER ZAHM — She must have been surprised to see a young visual artist like you coming to her and being so enthusiastic and cheerful.

JR — She told me she loved that I always took things with optimism. Even with a certain innocence. Innocence and curiosity transcend generations.