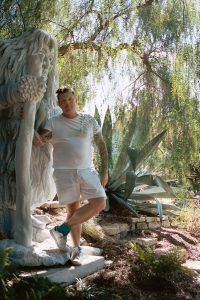 OLIVIER ZAHM — You’re a prolific artist — it’s incredible! How do you do so much work?

URS FISCHER — Um, it’s a good question. You just go with it. I’m a very impatient person. No, not impatient. I’m a restless person, you see? I think it’s actually my nature. But more and more I feel like a servant of my work. If that makes sense? 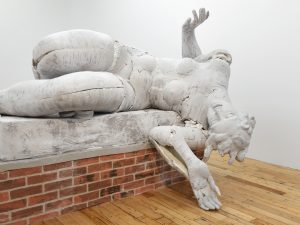 OLIVIER ZAHM — So art ideas come naturally to you?

URS FISCHER — Being creative is like guiding versus forcing. There are things, and you just try to guide them, and they have their own way. Then it’s easier, you see. 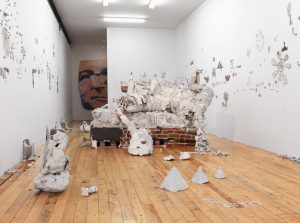 OLIVIER ZAHM — And do you think you still have the same kind of inspiration, or are you changing? 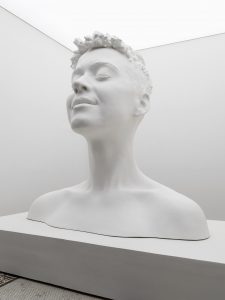 URS FISCHER — Different inspiration, different understanding. I don’t like the idea of working with a similar thing again. 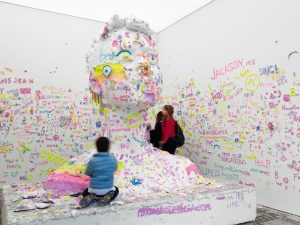 OLIVIER ZAHM — So it’s like an ongoing process, or evolution.

URS FISCHER — Yeah. It’s not the same. When you arrived, we spoke about feelings. And I wanted to tell you that my grandmother said this thing that just came recently to my mind. She said, “Feelings don’t age.” I was thinking about it, and it’s true, you know. It’s true — feelings don’t age. But your approach to them ages. For example, you have very strong feelings, but you don’t go crazy over them necessarily because you know, “Okay, this is not good for me.” Or: “This is this feeling, and this is where it comes from.” You understand because you have been to certain places, but it still feels very strong. It could be an analogy for art because maybe things are not new, but you have a different perspective on the same thing. 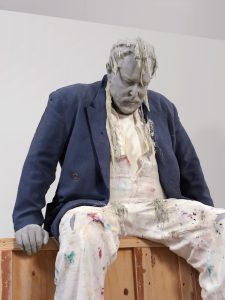 OLIVIER ZAHM — How did you end up working with wax? It’s a question I wanted to ask you because it’s a metaphor for art, for art’s dematerialization.

URS FISCHER — Art is vanishing. I know. I believe so. I believe, weirdly enough, it is.

OLIVIER ZAHM — What’s left in a museum or an art institution from what we used to see 10 years ago, 20 years ago, is very little. It’s just a few remains.

URS FISCHER — I think it’s vanishing in its current form. People talk about the market, this and that — they are sure there will always be homes. So that part is maybe where things get commodified. That part will always be around in some way, but as a tool for dialogue or for communication,
I think the role shifts. There are so many other channels. But what’s interesting is that you still see a lot of concepts and ideas, which come out of art, that then get used in very different ways. So,
I still think it’s an amazing tool for ideas, concepts — but what happens with them is nowadays less about the artwork. It’s about how they disperse into everything else, you know. And that’s probably a major shift. But I don’t think that’s necessarily bad. I mean, I don’t care.

OLIVIER ZAHM — It’s not bad. It’s even maybe the essential
role of art, to open communication beyond the object.

URS FISCHER — I made this portrait in Plasticine of Katy Perry in Rome. She came to my studio. And then this happened. We put one layer of white, and inside we put many layers of really bright colors.

OLIVIER ZAHM — So if you scratch the surface, you see the colors?

URS FISCHER — You have to work hard for the color to come out. Her sculpture will be taken apart by the visitors. At the end, she will be like a colorful abstract lump, like an abstract sculpture. This was in Rome, you have too few people. But I’m going to do it again in New York. I rented a big store in NoLita for two months. We’re going to put it in there, and she will help me promote it — so no art people. I don’t want to do this in a gallery… I want a different audience, from the streets, not the art people.

OLIVIER ZAHM — Everyone wants a little part of Katy Perry, or of your sculpture.

URS FISCHER — Yeah, everybody can take it, and they alter and change it how they want.

OLIVIER ZAHM — You’re still a situationist in a way — you create situations outside of the gallery, or outside of the art system. You have this kind of guerrilla mentality, too.

URS FISCHER — Maybe. I never thought of that. Yeah.

URS FISCHER —  Well, you want to communicate. And galleries, vanishing galleries are not really a good place to communicate anymore. Maybe, in the end, you have a few photos, people look at them on Instagram, Or you have affluent people who come there for that reason, and that’s cool. I love that. I like living with art. You probably, too, no? But for me,
I don’t define art as being a solely material thing.

OLIVIER ZAHM — But sculpture comes from marble, not Plasticine or wax. I mean, traditionally, it’s made to defy time. 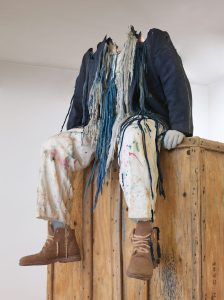 OLIVIER ZAHM — Or to be eternal.

URS FISCHER — You know, concepts can be eternal, too. No? Concepts don’t have
physical erosion.

OLIVIER ZAHM — Have you been influenced by your kids? By looking at them playing with…

URS FISCHER — No rules! And you don’t have to be skilled. Everybody’s skilled. What you realize once you have children is: everybody you meet was an artist at some point in their life. For some reason, some of us are still stuck in childhood [laughs], when the directness is amazing. That’s the part I care about. It’s less about the theoretical. I don’t care about that.

OLIVIER ZAHM — And it’s not about the object either. It’s about the communication.

URS FISCHER — It’s about  the communication and the question “Why is it art?” — not about the question “What is art?” which creates bondaries. And within this framework or concept of art, everything is very rigid; there’s not a lot of room, you see.

OLIVIER ZAHM — The public participating and being part of the work is very liberating. It gives a sort of anarchist quality to your work. Are you an anarchist, in a way?

URS FISCHER — What’s the opposite of an anarchist? Pro-archist? [Laughs] I don’t know.

OLIVIER ZAHM — The opposite would be someone who is impressed by power or someone who respects power. Maybe someone under the influence of fear. You don’t seem to be scared.

URS FISCHER — Hmm. I’m scared of plenty of things, but not of art, no. You’ll see next year I have some projects that have a very different form of participation. It’s more and more about the way that people will interact with the work. You’ll see. 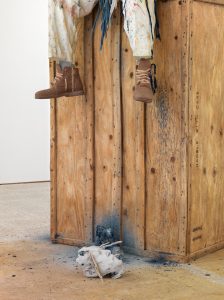 OLIVIER ZAHM — But do you define yourself as a sculptor?

URS FISCHER — Do you wake up and think you’re a publisher, editor, the chief of a magazine? I don’t think so.

OLIVIER ZAHM — [Laughs] So, can you tell me about the teddy bear, the big yellow teddy bear? Is it still on Park Avenue in New York?

URS FISCHER — No. It’s in the middle of the Qatar Airport. It’s very cool. It’s very funny. They have 55 million people coming through there. Look. I never expected this, when I made this bear out of a shitty little yellow blanket, by hand, in my studio, stuffed it, and made the bear. When you make it, you never expect it’ll be in a place where millions of people pass through and become a symbol of this place.

OLIVIER ZAHM — How do you pick the artists you want to depict, like Julian Schnabel for the portrait in wax?

URS FISCHER — The first candle I made of this man was actually a portrait of Stephanie Seymour. She commissioned all of the artists to make these portraits of her. And I suggested doing a portrait of her husband, Peter Brant. And we called it Stephanie, but you don’t see Stephanie. And then the second one I made was a friend, the Swiss artist Rudy Stingel. Rudy and I had a studio together,
10 years ago. So that came out of this whole thing. And then, there was Julian Schnabel. It’s just — I think over time, I got interested in men.

URS FISCHER — Yes, powerful men, but also how men build shells, how men build identities. All your life you are trained to have one, to be solid. And I did their wax sculpture as a giant burning candle.

OLIVIER ZAHM — And what happens once the candle has totally melted?

URS FISCHER — We make a new one.

OLIVIER ZAHM — All over again. [Laughs]

OLIVIER ZAHM — I think your work is very stimulating and exciting, and more open to interpretation than other work. To me, it seems that you keep the idealistic idea that art can change life.

URS FISCHER — Well, I don’t think of it this way. [Laughs] But I love art. I really love art. I see art as a celebration of life. That’s what it’s good for. That’s the main thing it can give. It can help you see, it can help you understand by seeing. Everything you see, you keep in your mind forever. And you can see it again, and you see something that you might not otherwise know. There are so many things in the world that I know because of artists. Even in California. David Hockney’s California series — you see some things. Without these paintings, I wouldn’t see the same. But I see more.

OLIVIER ZAHM — And you feel more.

URS FISCHER — Yeah! Somebody articulates it.

OLIVIER ZAHM — Do you think art can be taught?

URS FISCHER — You have a lot of educators. You have institutions, schools. They all have people who need to make a living. And they administer what art can be. If you look at Jean-Michel Basquiat or Keith Haring, for example, that was an interesting moment because these people were not educated. It was immediate. It was really about celebrating life.

OLIVIER ZAHM — Yes, the celebration of life and the direct transmission of what you have seen or what you feel.

URS FISCHER — And not filtered through everything that has been done, yeah.
I mean, art is fun. I’m very curious where it will go and what it will progress into, besides all these art schools and institutions. Where it will really thrive.

OLIVIER ZAHM — What will art be in 10 years? It’s so mysterious. I mean, we couldn’t have imagined 10 or 15 years ago what it has become today.

URS FISCHER — Actually, unlike music, art is really changing these days. In the early ’90s, music needed to be new every week. Over time, differences shrink, but with art, there is a big identity crisis at the moment, a giant one…

OLIVIER ZAHM — The paradox is that such an incredible variety of art is being made today, which is destroying its identity. It’s like vegetation growing.

URS FISCHER — And also with these landscapes, it becomes more homogenized.

OLIVIER ZAHM — So, in a way, art is becoming like everything else, more disposable.

URS FISCHER — Do you remember when some people in the ’80s lived alternative lifestyles? Now, 20 or 30 years later, it has become a mainstream standard. The shock value of everything is gone.