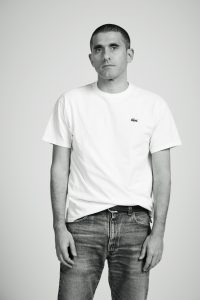 OLIVIER ZAHM — Lisbon is now the hot destination for Europeans.

FELIPE OLIVEIRA BAPTISTA — I always used to think of Lisbon as Europe’s best-kept secret. It’s funny to see people suddenly getting all excited about it. Lisbon was a great place to grow up. There is something very safe and easy about the city; in general, people are very kind, so as a kid and teenager, I had access to quite a lot of freedom. Cutting classes to go to the beach, hanging out in the old gardens, and going out at night from a very early age. Lisbon is such a special place. The quality of the light, the ocean, the drama, the decaying beauty, the modernist architecture, the old people, the melancholy, and the joy.

OLIVIER ZAHM — What is it like to come from Portugal as a designer?

FELIPE OLIVEIRA BAPTISTA — I would say maybe a certain sobriety and rawness. It’s not something that I tend to analyze or control. I have traveled a lot since I was a kid (my father was an airline pilot) and have been always fascinated with discovering new places (I suppose that comes from the ancestral Portuguese heroic vision of discovering the world). On the other hand, I left Lisbon when I was 18. I studied in London, lived in Italy, moved to Paris, and worked quite a lot in Asia and the US.

OLIVIER ZAHM — Who is your favorite Portuguese artist?

OLIVIER ZAHM — Isn’t it really scary to look at the future that is facing us?

FELIPE OLIVEIRA BAPTISTA — I like to look back, always. But I don’t like when people get stuck in the past, holding on to it as a better world that has disappeared. Yes, the idea of the future might be scary in today’s socioeconomic situation, but it will always be exciting to look ahead.

OLIVIER ZAHM — Do you use Instagram as a source of references?

FELIPE OLIVEIRA BAPTISTA — Sometimes, but what I prefer is to go out and find new things in real life. There is something quite unsexy about getting everything from a computer.

OLIVIER ZAHM — About Lacoste, can you tell us about your new collaboration with M/M (Paris) for the set design of the last show?

FELIPE OLIVEIRA BAPTISTA — We did a collaboration with M/M that just came out, a capsule collection based on an alphabet they created for Lacoste. They wrote the word “Lacoste” in a crocodile shape. The project was so good that I suggested pushing it forward for the show. Their alphabet became iron and Plexiglas 3-D typographic sculptures, the logo turned into a micro-logomania sports monogram.

OLIVIER ZAHM — Why did you decide to stop showing in New York and come back to Paris for the fashion week show?

FELIPE OLIVEIRA BAPTISTA — Lacoste is probably the most iconic French sportswear brand, and bringing the show back to Paris felt natural. Lacoste’s 85th anniversary collection was a good excuse for a homecoming show.

OLIVIER ZAHM — Lacoste is a success story, and your work there definitely lends it a new energy. Is it difficult to design for a brand that speaks to all generations and all genders — a brand that is universal in a way?

FELIPE OLIVEIRA BAPTISTA — I wouldn’t say difficult, but definitely challenging to design for such a democratic brand without compromising. How to keep things relevant and at the same time appeal to an eclectic audience? It is both restrictive and exciting.

OLIVIER ZAHM — When you want an inspiring place to escape, where do you go?

FELIPE OLIVEIRA BAPTISTA — I travel as much as I can for research. Every summer, I go deep into nature, as far away from civilization as I possibly can.

OLIVIER ZAHM — How would you describe the fashion world in three words?