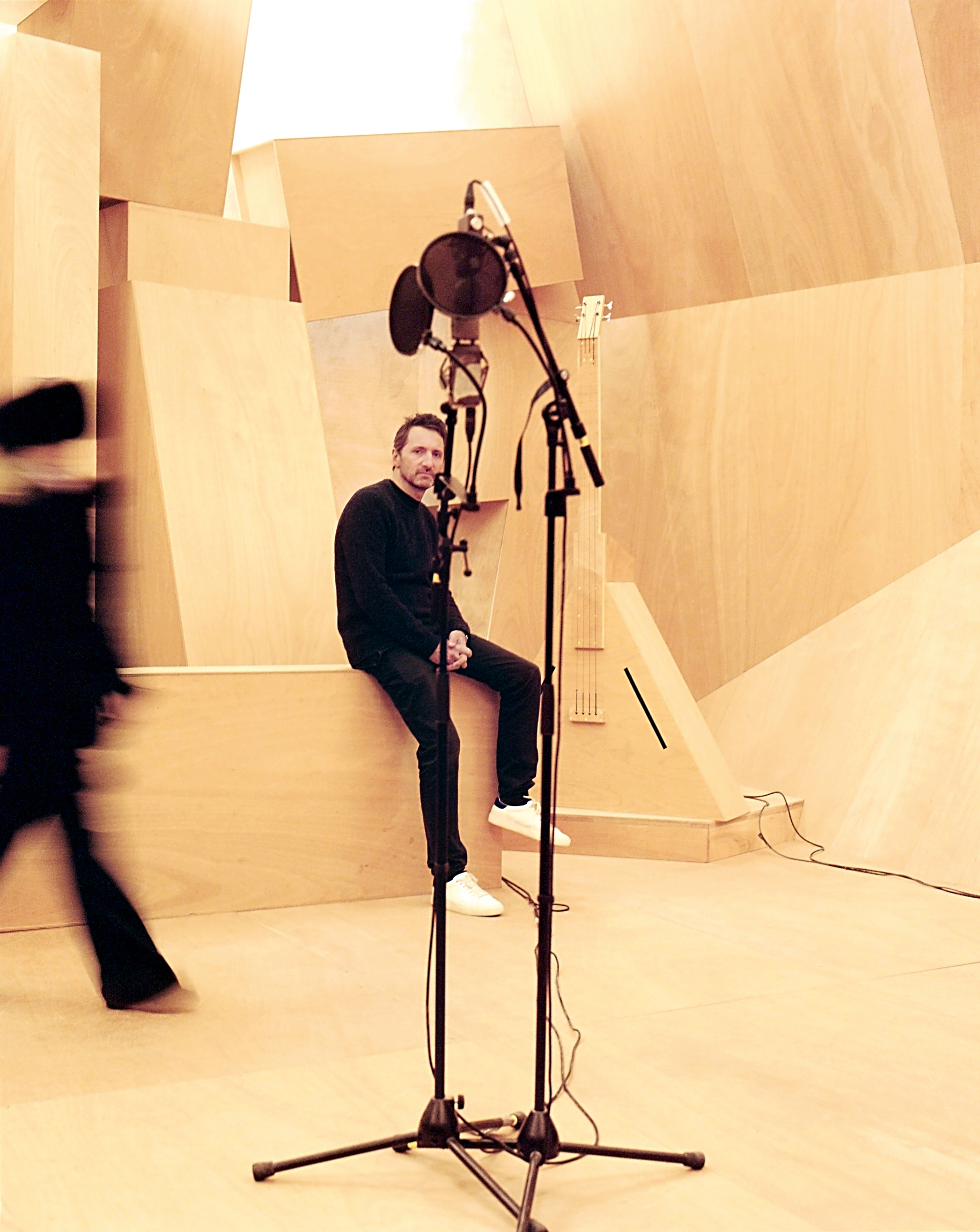 OLIVIER ZAHM — What have you gotten out of seven months of intimate, intense contact with the hundred musicians you invited to play and record at the French Pavilion at the Venice Biennale?

XAVIER VEILHAN — It’s hard to say so soon. I didn’t want the Biennale to be an end in itself. I wanted it to be a turning point, a launchpad for other opportunities. That had a great impact on me because it was like being exposed to a kind of radiation, the positive radiation of music, with its great emotional charge. I hadn’t realized how great an effect being exposed to all that music would have. Little by little, the experience did more than change the limits of the exhibition or the way I observed the work. It changed my whole approach to my professional and personal interests.

OLIVIER ZAHM — Did it change your relation to music and to art in general?

XAVIER VEILHAN — Before, music was an accompaniment to my work and stayed outside its outer limit. Then things evolved. Music became the core of certain pieces, where I was putting a visual environment at the service of a sonic experience. In Studio Venezia, I explored the boundaries between different domains: exhibitions, musical practice, architecture, and recording. These are shifting borders. For a border to shift in an interesting way, you can’t define it in advance. You have to live the experience of mixed exposure at the studio. It compels the visitor to take up a position with respect to the situation without knowing if it’s a matter of architecture, music, or visual art.

OLIVIER ZAHM — Did you discover any instruments? What’s your favorite instrument, months later? 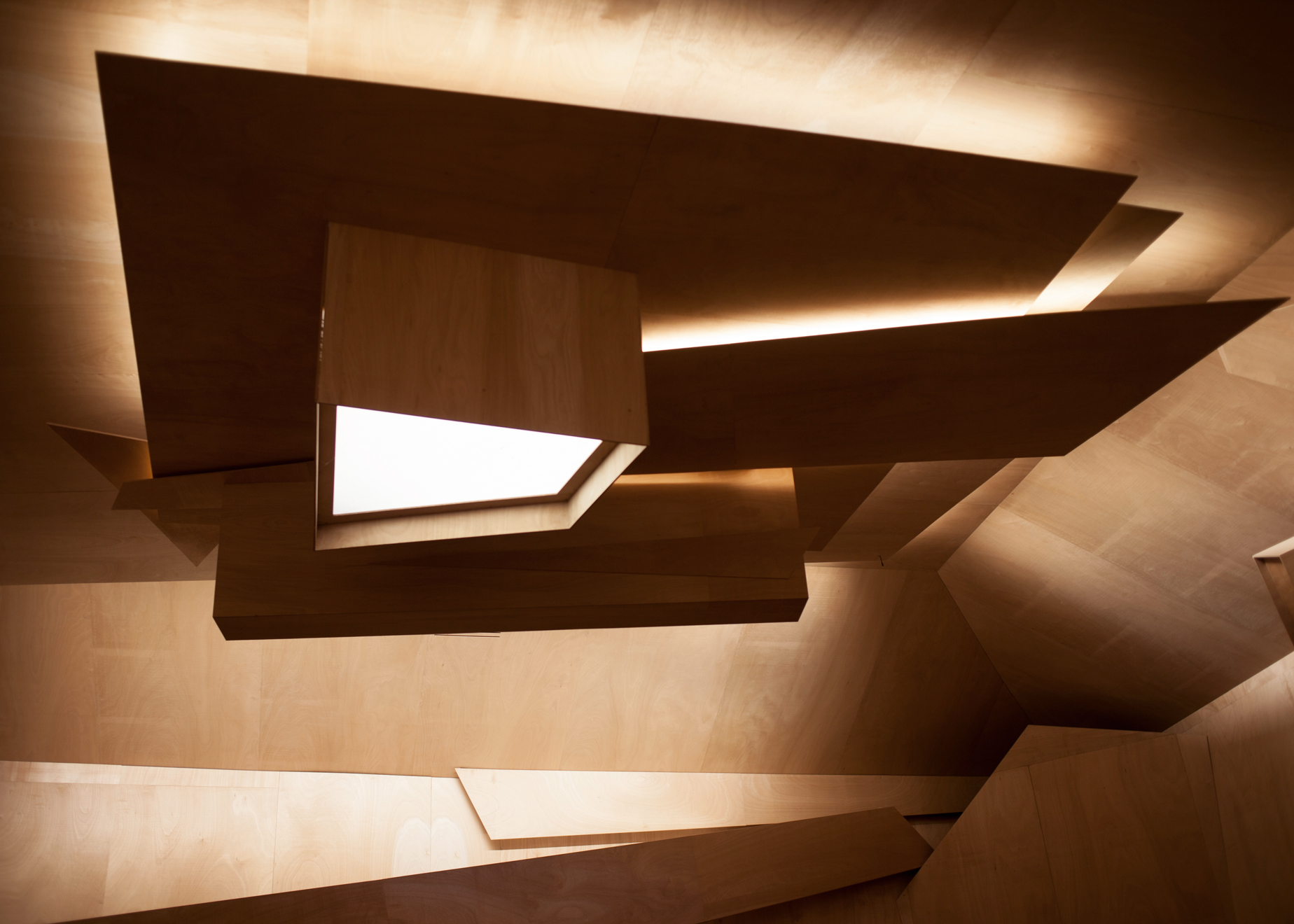 XAVIER VEILHAN — The instrument that’s become almost an emblem of Studio Venezia is the Cristal Baschet. But the one I prefer is the drum synthesizer, the Vermona, which is very easy to use and sounds great. You don’t enter parameters. You turn the dials directly.

OLIVIER ZAHM — What kind of music were you listening to before Venice, and what are you going to listen to now that it’s over?

XAVIER VEILHAN — I used to listen to a lot of contemporary hip-hop, bass music, ambient, electro, and classical music. Then I started listening to artists who sort of defied categorization, somewhere between pop and electro. Since Studio Venezia, I’ve been listening to more classical music, like Alexander Scriabin, or to little-known composers, like Gustav Holst, some of whose pieces I heard at the pavilion. But also composers like Beethoven, whose lesser-known pieces I’ve discovered and gotten interested in.

OLIVIER ZAHM — How did you design the recording studio’s architecture? It’s both functional and aesthetically pleasing. The floors, walls, and ceilings collide to form an architectural landscape, a “musical garden.”

XAVIER VEILHAN — Not a single square centimeter wasn’t covered in wood. That allowed me to create a proper space for the exhibition, or even for sculpture. Studio Venezia is a sculpture turned in on itself. You feel at home there, but you’re also in an exotic place, on a scale that we’re not familiar with, halfway between a private room and a hall for music. 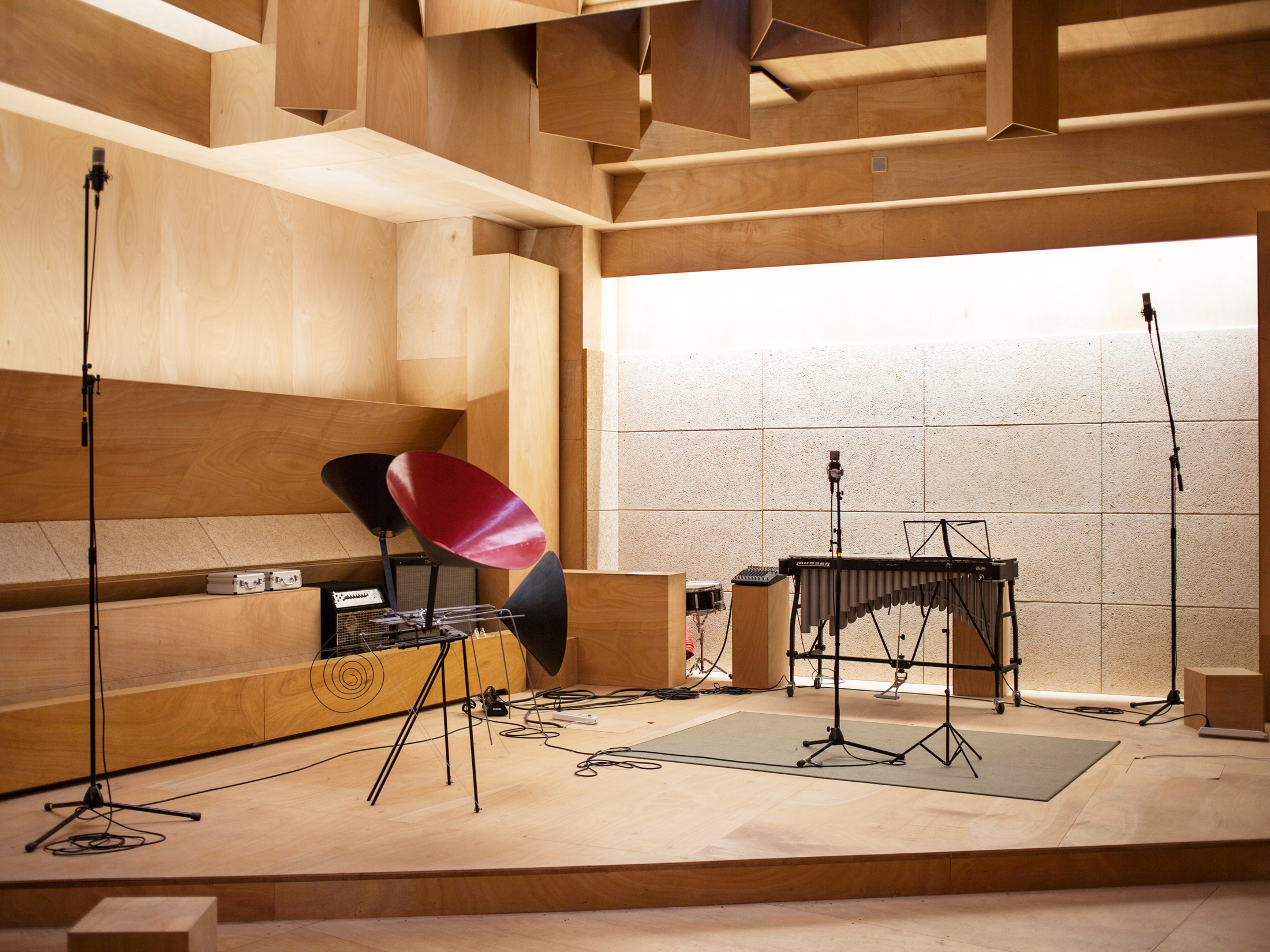 OLIVIER ZAHM — Why your fascination with architecture and for the art of the everyday?

XAVIER VEILHAN — Let me give you a somewhat abstract answer. For me, the art of the everyday consists for the most part of the shifts we make between different scales. We hold an object, enter a building, leave a country, circle the earth. These are various shifts to different scales. These shifts might occur at microscopic levels, comparable to what happens inside a computer. What I seek to do through art is invent experiences, or what I call situations, and the purpose is to construct the right situation for a kind of creativity. The purpose isn’t to end up with an object or an exhibition; it’s the creation of a situation. The idea for a space like this is to create an exhibition object that will itself generate other things on the artistic plane.

OLIVIER ZAHM — Is it very expensive to involve so many bands and musicians?

XAVIER VEILHAN — Yes, but I was able to divert the Biennale’s economy. If the recording industry hadn’t basically collapsed because of the Internet, we wouldn’t have been able to undertake the project. There would have been strong economic pressure against it because it would’ve been a waste of time for the musicians. In the end, the relatively strong art economy allowed us to invite all those musicians. The idea for a recording studio in the middle of a contemporary-art exhibition created a space where we witnessed something that’s nearly but not completely a show and doesn’t fall within the usual order of things, where you go see such-and-such group on this day for that amount of money. 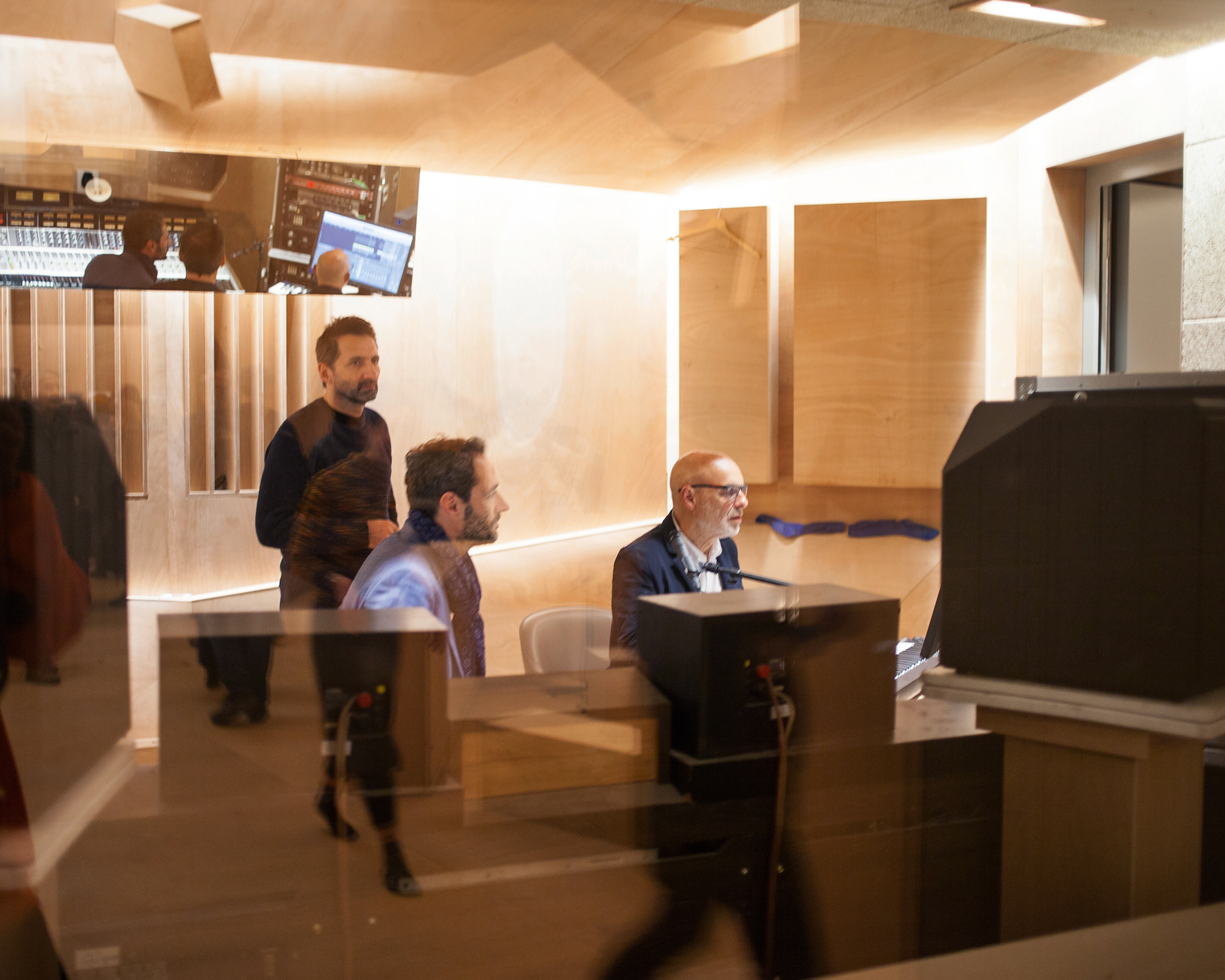 XAVIER VEILHAN — Yes. The studio is an activated form of sculpture. But even when it’s deactivated, the studio remains a sculpture. We planned it out aesthetically and practically. The studio’s function doesn’t detract from the quality of the sculpture. On the contrary.

OLIVIER ZAHM — You make reference to a phrase of Pierre Schaeffer’s [from his Treatise on Musical Objects]: “Music is architecture that speaks.” Could you comment on that?

XAVIER VEILHAN — Everything we receive optically is a frequency. Everything we hear is also a frequency — not of the same kind, but a frequency nonetheless. Architecture sets physical limits on those frequencies. Artists in a gallery or a museum have limits placed on their perspective or exhibition by walls, as well. For me, there’s a relationship between the visual domain and architecture, just as there is between the sonic domain and architecture, where vibrations bounce around.

OLIVIER ZAHM — In fact, you’re a Guy Debord “situationist,” a creator of situations that get away from you, that escape the artist.

XAVIER VEILHAN — I think projects follow upon one another in a chain-like way, each contributing raw material to the next thing. I like the idea of creating situations — though without being a “situationist” because there’s a desire in ’60s avant-garde politics to flip over the table. I don’t feel that. I’m more about evolution. But evolution can include watershed breaks with the past. The limits on our time, and on our lives, create a sort of dynamic where the same old things from our past are always catching up to us — our roots, our gender, and so forth. At the same time, we make great efforts to explore the hidden face of the things that make up our being. For me, it’s important to integrate the notion of time as an engine, or as a motivation.

OLIVIER ZAHM — What do you think of our digital era?

XAVIER VEILHAN — The digital allows us to breach certain temporal and spatial frontiers, and thus serves as a perfect complement to the exhibition, which is a prisoner to its materiality. If I make a sculpture, it cannot be both here and there at the same time, whereas the work of, say, musicians can be everywhere. For them, there is no difference between copies. The copy as such no longer exists. By doing away with the object, the digital has allowed us to develop that aspect of things and thus becomes complementary to the visual domain. Now, if the art market is healthy, it’s because of this materiality. If the objects produced by artists were to become infinitely duplicable, they’d have far less value, and the art world’s economy would be destabilized, just like the market for records. There are thus complementary aspects in the one and the other. By welcoming the music world into the art world, as I’m now doing, I’m making use of the ease with which musical works can be spread.

OLIVIER ZAHM — What do you think of contemporary art today? Is it still a resource for the world or just a formal symptom of our inability to see the world, or love it, or correct it?

XAVIER VEILHAN — I think it’s a resource, precisely because we’re unable to understand the world. The world needs to be summed up and rendered coherent.

OLIVIER ZAHM — Let’s return to Venice, take another look at Venice. What can you tell us about that city after living there for seven months?

XAVIER VEILHAN — Venice is an enigma. I thought I was going to get used to certain things and get tired of others, but that’s just impossible. Quite the contrary. When I emerge from the train station or the airport and smell the odor of Venice, it always has the same effect. It’s magnificent to stroll through the streets of Venice at night. It ought to have vanished by now, but it endures everything and continues to function. Then there’s the absence of noise and cars and advertisements. You find yourself in a space delimited by water, yet actually quite open and uniform. The exhibition will travel in 2018 to Buenos Aires and then Lisbon.