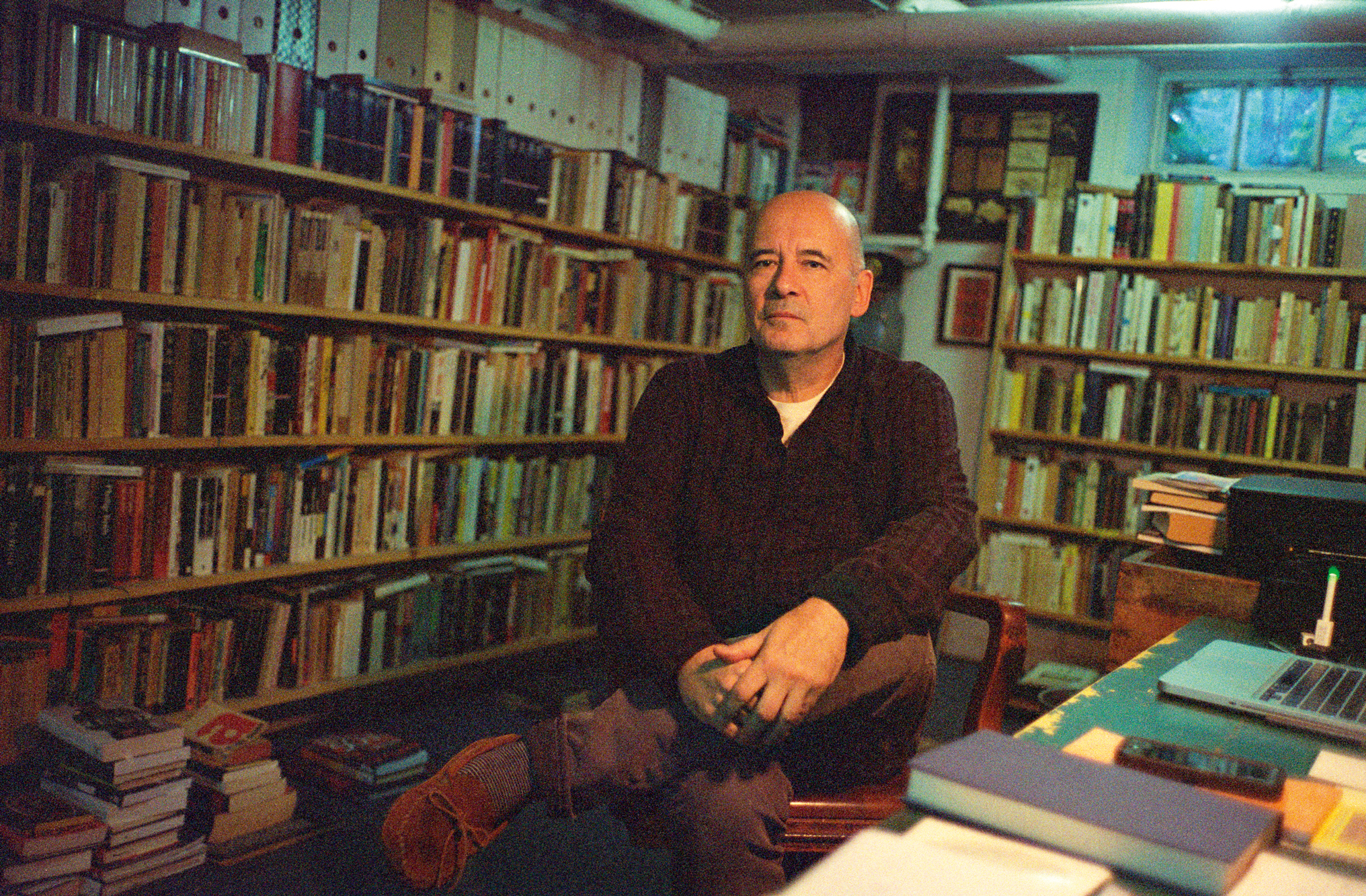 BILL POWERS — We are sitting inside The St. Regis Hotel, at the King Cole Bar, in New York. This is where Marcel Duchamp told Calvin Tomkins to meet him for the first time. Do you believe that spaces hold the residue of such encounters?

LUC SANTE — I’m not especially metaphysical, but it does feel like there are certain echoes attached to places. Maybe that’s why I never feel entirely at home in places that were just built.

LUC SANTE — Totally. They have no fingerprints — hence, no soul. And those echoes don’t have to be related to famous people. I’m interested in anonymities that might never have left their names on anything, but
whose lives were marked by incident and richness, nevertheless.

BILL POWERS — The critic Roberta Smith commented that art history is like an hourglass, where the present starts very wide and then the art market and historians distill it down to a handful of names, until the next generation starts excavating the past. Does her observation register with you?

LUC SANTE — The people who did not insert themselves into the conversation of the moment, yes.

BILL POWERS — Is all history an hourglass, to some degree?

LUC SANTE — Certainly literary history follows that trajectory. And, of course, the history of photography, which I teach at Bard.

BILL POWERS — What is the future of photography?

LUC SANTE — The jury is still out. I’m such a bad prophet. One thing I can imagine is a revival of artisanal practices, where focus returns to the importance of the finish.

BILL POWERS — Isn’t that just a form of fetishization?

LUC SANTE — Not necessarily. Attention to craft is a key aspect of every art practice, and it stands to reason that there will be a reaction against the casual ease of work made using digital technology.

BILL POWERS — I think we might see the death of photography, as video becomes so high-resolution that you can simply pinpoint a frame and present that image as a film still. Also, this same technology will render the idea of posing for a picture obsolete.

LUC SANTE — But you could see this coming with motor drive cameras, where you have your fashion model twisting and turning in a sequence. Click-click-click-click. That’s not very different from what you’re describing. Also, human vanity is such that people will always want to control their pose, especially the aged among us: “I only want this profile, with this light from this distance.” That will always restrict selection.

BILL POWERS — Gabriel Garcia Marquez said we all live three lives: our public life, our private life, and our secret life. Do you believe that?

LUC SANTE — I suppose so. I don’t know what my secret life is, exactly.

BILL POWERS — Do you believe that history operates this way?

BILL POWERS — I’m always surprised how the dead don’t get to keep their secrets.

LUC SANTE — I think you have to figure out whom the information might hurt and proceed from there. In the absence of potential victims, then I say, “Fuck it. The dead don’t care.”

BILL POWERS — I ask because I know you are writing a Lou Reed biography.

BILL POWERS — Aren’t you, like, five years late turning that book in?

LUC SANTE — No, I still have a year left until deadline. But I’m always late, so I guess it’s inevitable. To be realistic, with every book I’ve ever written, I’ve gone through a phase of not even wanting to think about it, while the material is swirling around in my intestines.

BILL POWERS — Because I know Rene Ricard had some good Lou Reed stories. And he used to be your neighbor in the late ’70s.

LUC SANTE — This is why I can’t drag my feet much longer: Rene Ricard is dead, Billy Name is dead, Glenn O’Brien is dead. All people I would have wanted to interview.

BILL POWERS — Richard Prince reminded me that Lou Reed’s ex-wife was in the collection of writing he edited called Wild History.

LUC SANTE — Sylvia? Interesting because when he was my neighbor in the building on East 12th Street, he was living in her former apartment.

BILL POWERS — Did you hang out with Richard back then?

LUC SANTE — Mostly he complained about my noise because I liked to play reggae 12-inch 45s with extreme bass at 3 A.M. But it was that kind of a building.

BILL POWERS — Probably Allen Ginsberg was the most famous resident in your building back then. So would you get all types of actors and musicians rolling through the lobby?

LUC SANTE — I missed the time Bob Dylan visited. Or rather, I wasn’t in the stairway to see him. On the other hand, I saw Gregory Corso every other day.

BILL POWERS — What about the night Rene Ricard burned down his apartment?

LUC SANTE — I went to see a movie at Film Forum. It was Erich von Stroheim’s Walking Down Broadway, which has a recurrent subplot in which every night a character leaves the construction site where he works and goes across the street to a saloon to get hammered. When he has accomplished that, he goes back to the construction site and steals some dynamite, which he stashes under his bed when he gets home. Following Chekhov’s law, the inevitable happens — he blows up the house. I remember thinking, on the way home, “I live in the kind of crazy building where something like that could actually happen.” And then I walked in to see all of my neighbors rushing around with buckets of water because Rene had just set his apartment on fire.

BILL POWERS — What was your job at that time?

LUC SANTE — I was probably still working at The New York Review of Books.

BILL POWERS — I know this is a sweeping question, but how would you define culture? My friend said culture is that which outlives the lifetime of its maker.

LUC SANTE — I remember that during the only real fight I ever had with my editor at The New York Review, I suddenly realized we were using the word “culture” in completely different ways. For her, culture meant George Balanchine and Igor Stravinsky and W.H. Auden. For me, culture was bowling alleys and tattoo parlors and hot-dog stands. She meant the rich artistic heritage. I meant the setting in which life takes place.

BILL POWERS — So, how do we define art, then?

LUC SANTE — For me, art is an exchange. You have to have a giver and a taker. And it’s not a simultaneous process. A scientific photograph made in 1892 to document insect life was probably not considered art by its maker, but it can be received as art by us today. On the flip side, you have the paintings of Thomas Kinkade, which were received as art by their consumers, but not given in that spirit.

BILL POWERS — What art do you live with at home?

LUC SANTE — I have a collage made by an English clergyman in 1860 in which he cut up William Blake and John Flaxman, among others. And it’s as surrealistic as anything made 70 years later. Collage was the art of the 20th century — it still feels like the art of today because it’s about fragmentation and information overload.

BILL POWERS — But we both know that it’s not always the person who invented a technique, but the artist who popularized it who gets the credit, which is why Pablo Picasso and Georges Braque are thought of as the godfathers of collage.

LUC SANTE — My point was that we might still be in the long 20th century.

BILL POWERS — What does that mean?

LUC SANTE — Well, the long 19th century starts in 1789 with the French Revolution and lasts until the outbreak of World War I in 1914.

BILL POWERS — So, when does the 20th century end?

LUC SANTE — We don’t know yet because you only learn those things in retrospect. Some people think 9/11 ended it.

BILL POWERS — Are there long decades, too?

LUC SANTE — You could say the 1960s start with the John F. Kennedy assassination or The Beatles coming to America.

BILL POWERS — Do you believe that the JFK assassination — the collective trauma of that loss — created a set of conditions by which Americans needed a phenomenon like The Beatles to be euphoric about?

LUC SANTE — You’re right in that The Beatles arrived in New York just a hair over two months after his death. It’s really astounding how efficiently rock and roll was suppressed in the white world in the late ’50s, and then was retrospectively dismissed as a fad, like swallowing goldfish. After Elvis Presley and Jerry Lee Lewis, but before The Beatles, white pop stars were such nonentities. White youth needed sexual expression in popular music, and white kids were not going to be flocking to James Brown concerts at that point.

BILL POWERS — Marcel Duchamp once complained that the dead have too strong a grip on the living, and we must learn to forget the past.

LUC SANTE — He’s coming at it from a European perspective of that era. There’s no danger of that in America.

BILL POWERS — Because we forget the past every day.

LUC SANTE — Exactly. And especially now. The lack of curiosity. I think it has to do with the Internet. And people’s inherent belief that the Internet contains everything, which is so far from the truth. And the delusion that technological change, always called “progress,” will always be an improvement over what preceded it. I often wish I was 10 years older, so I could have had another decade before the Internet.

LUC SANTE — The thing that bothers me most about the Internet is the question of ownership. You are always going to be shackled to the service providers. You can’t go into your garage and make up your own Internet or whip up a batch of bandwidth in your kitchen. You are forever at the mercy of these corporations. Nobody seems to talk about that.

BILL POWERS — Do you agree with Dave Hickey’s assertion that history happens because people save the things they love?

LUC SANTE — I’m much more interested in detritus. For instance, who has the earliest example of a Dixie cup? Those must be rare as shit.

BILL POWERS — In your book The Other Paris, you talked about how the poor made ends meet by hustling on the street for centuries, until the slums were replaced by the projects in the name of safety and cleanliness. But this trade-off robbed the poor of a public venue for trading goods.

LUC SANTE — The poor aren’t allowed to ply their trade on the street anymore, but the middle class isn’t allowed to, either. Chance, custom, eccentric individuality are all closed off from participation. Every aspect of the city street is designed by corporations. All success or failure now begins at the planning level. It’s not so much that you have wiped the poor off the map — you have wiped humans off the map.

BILL POWERS — Is it true that history is written by the winners?

LUC SANTE — Yes, this is true and perhaps inevitable. Which is why the history of the losers and marginalized is so rare and precious and necessary.