modeling as a political platform 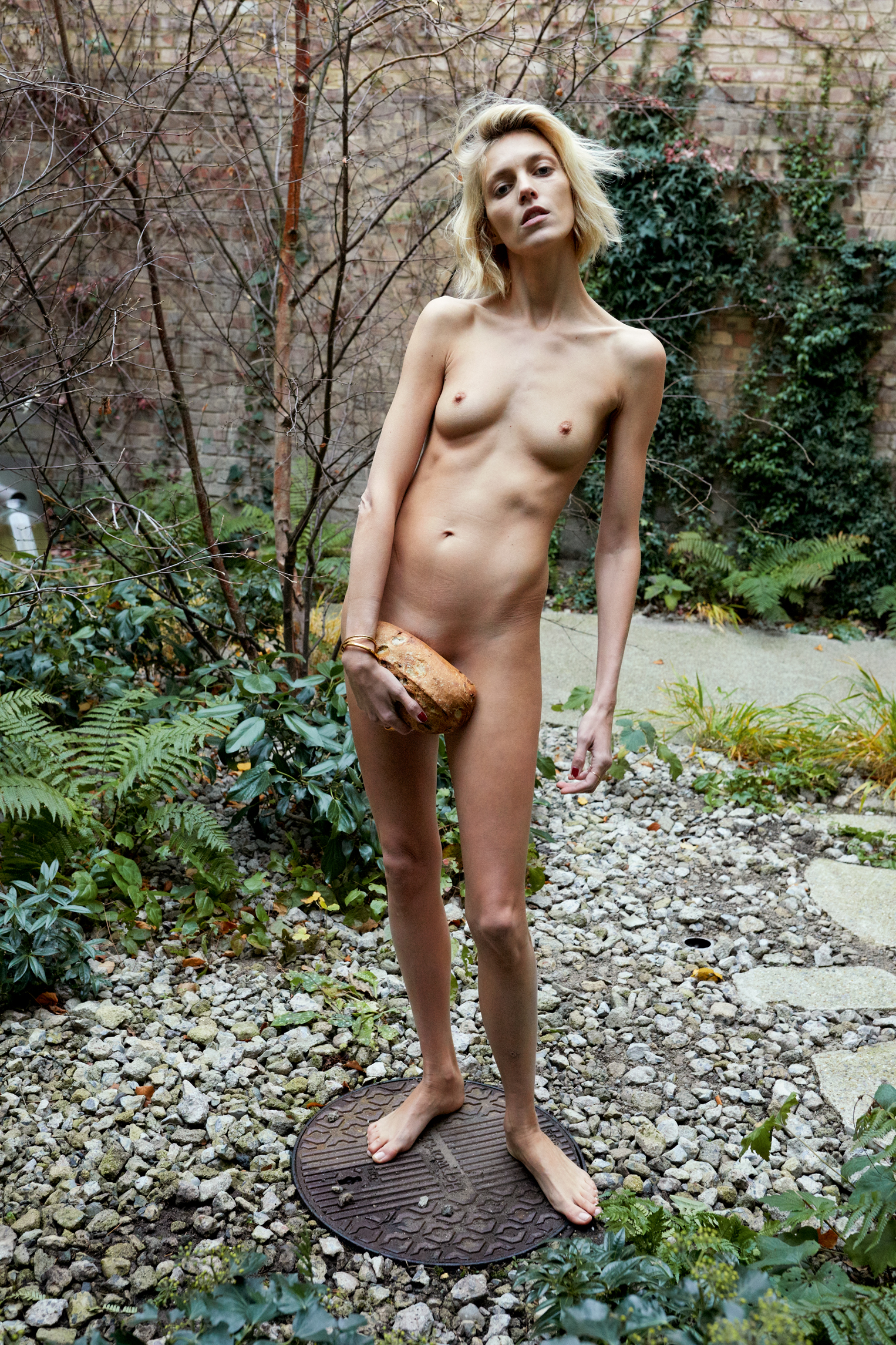 OLIVIER ZAHM — You have to admit, this is quite rare. Models are not usually famous for being part of the political scene.

ANJA RUBIK — I think that’s changing. Back in the day, models were just pretty pictures on a piece of paper. You could never find out anything more. You couldn’t know what they actually believe or stand for. And now, social media has given them a voice. I’m new to social media. For me, it’s not something completely natural because I grew up with this idea that if you admire someone, you kind of want them to be untouchable, unreachable. Like an enigma, you know? Nowadays, the trend is the opposite — everyone wants to be the girl next door.

OLIVIER ZAHM — Do you mean that social media changed the status of models?

ANJA RUBIK — It gives models an amazing platform to actually say what they believe in and a way to fight for their beliefs. So we can turn the attention on us into something more interesting than just being seen for our beauty.

ANJA RUBIK — Well, it wasn’t so quickly because I moved to Paris when I was 17, and I went to a British high school, the École Bilingue. A horrible school! It wasn’t my vibe, you know. But I didn’t want to drop out, and I started to work. I was doing okay, but nothing major. I started modeling when I was 15, 16, and I started doing very well. I did Chanel couture when I was 15, and then I was exclusive with McQueen in London.

ANJA RUBIK — You know that show with the bandage around the head? With that huge cube of glass and the heartbeat? I opened that show, together with Kate Moss. We both came out together. So, I go way back! That was 2001. And then I moved to New York, and I started working with Inez van Lamsweerde.

OLIVIER ZAHM — So, Inez and Vinoodh were important to your career?

ANJA RUBIK — Yeah, greatly. I don’t think they even know how we met. I was in Paris. I was shooting something completely different. And I went into Studio Pin-Up, and there was a board, right? Now it’s all electronic, but there used to be a board saying who was in what studio at the entrance. I was doing the cover of German Elle, I think. I looked at the board, and I saw Inez and Vinoodh, and, of course, I knew who they were. I looked at their studio, and at lunchtime, I went into their studio by “accident,” pretending I was lost. I saw Inez, with her black hair, standing there in her trainers. And she looked at me — she’s very, you know, animalistic… And then she came over, and just started talking to me. And then she caught my name, and then I did the Chloé campaign. I created my own luck! [Laughs] I love their work. They are incredible photographers, I think. 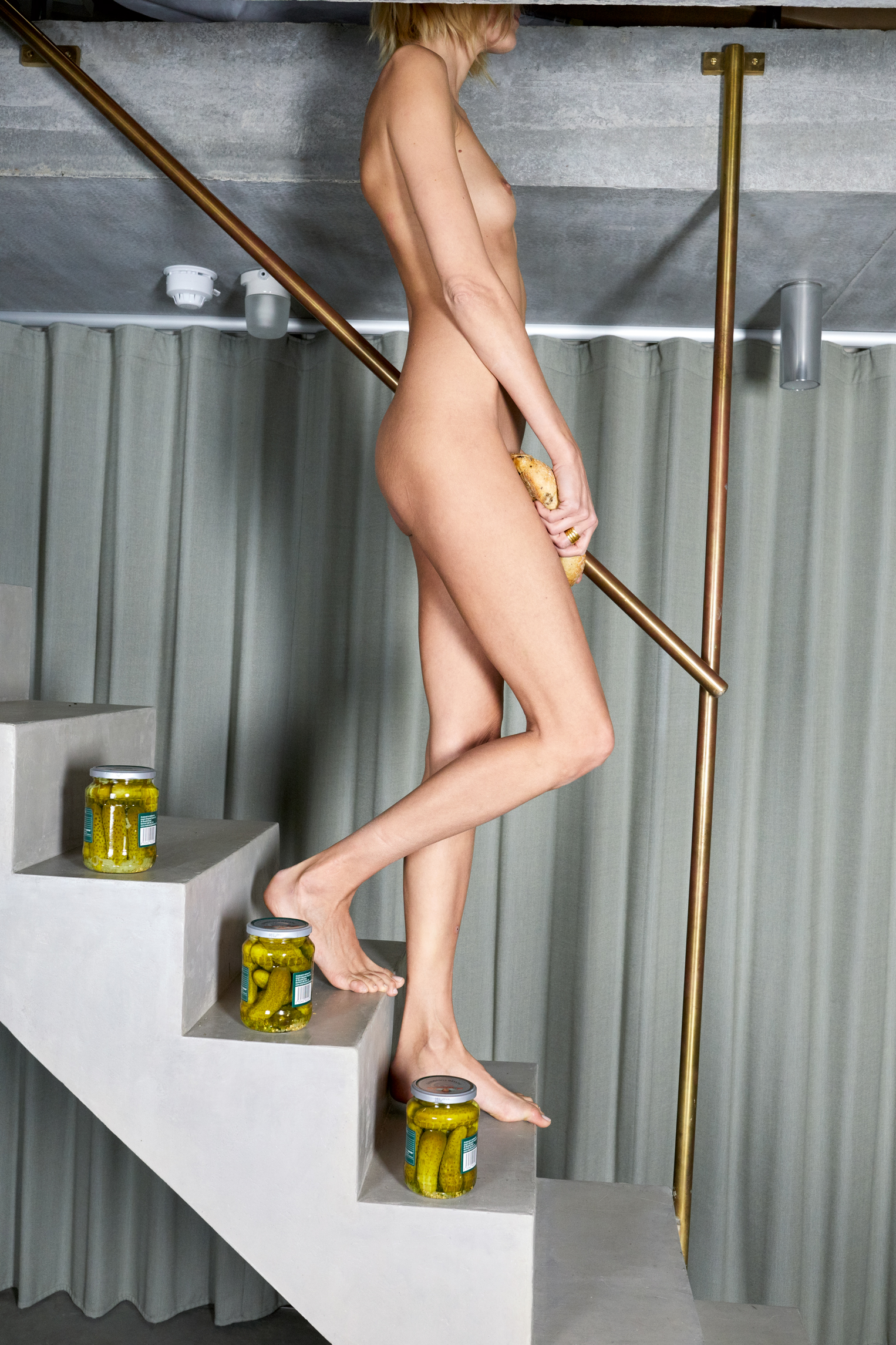 ANJA RUBIK — I’m also very interested to work with designers, to see the creative process… I was very lucky because I’ve worked with a lot of designers throughout the years, and very often I would do exclusive contracts. So, I would work with the designers for long periods of time, and you see how they create, how the clothes construction comes together. And that’s something beautiful, how much creativity and hard work go into every collection. Nowadays, since fashion is so fast, like this, like this [snaps fingers], you know, you kind of forget about that.

OLIVIER ZAHM — And now you’re the favorite model of Anthony Vaccarello, for example, the designer for Saint Laurent.

ANJA RUBIK — Yes. Well, it’s a long story with Anthony because I met him six or seven years ago now. Maybe more. He still wasn’t doing any shows. I was introduced by a friend, who showed me a picture of his clothes. I went to meet him in his little studio. He had a few pieces hanging, and I fell in love.

OLIVIER ZAHM — Again, you made it happen.

ANJA RUBIK — That year, I was going to the Met Gala, and I asked permission from Vogue to wear a designer that I’d picked myself… And they said, “Who?” And I said, “Well, this really young designer that you probably don’t know, but he’s going to be huge — Anthony Vaccarello.” And I asked Anthony to design the dress for me, and I said: “Anthony, you can do what you want. It has to be sexy, and it can’t be black.” So he freaked out because he doesn’t do color. And then he made it in white. And that was the white dress that was on the cover of everything, very provocative — with the slits.

OLIVIER ZAHM — You also created 25 Magazine. Why did you decide to do that?

ANJA RUBIK — I had a friend who had a small magazine in Austria called Quarter. And that’s actually where 25 came from. 25 cents… And I was looking at the magazine, and I was commenting, and I said, “Ugh, your fashion is shit!” And then he said, “Well, would you like to do something, maybe?” And I said: “Oh, why not? Okay, I’ll organize something.” And then that magazine won the best issue of the year for this prize. And then I realized I would love to create something that I don’t see that exists from my point of view. Something with a little bit of an erotic twist, but from a woman’s perspective — that would explore one subject and invite different contributors into it.

OLIVIER ZAHM — Maybe I misunderstood, but was it a magazine made by women for women?

ANJA RUBIK — This was over six years ago — there were not that many women photographers working in fashion. The whole first issue was just women. The second issue was women within fashion from a creative, design point of view. The third issue, I kind of went away from feminist issues. I wanted to focus on narcissism. I thought it was something interesting to explore critically. Then I did one issue on the five senses. My favorite one!

OLIVIER ZAHM — In a way, it’s a very feminine issue, this one. Because it’s all about sensation and different perspectives — not just the visual, not just the eyes.

ANJA RUBIK — Senses are everything. It was important that as we play with the paper, there is a smell. The paper was fragranced — with a fragrance that was created by Ben Gorham from Byredo. There were textures on some of the pages, and obviously sight.

ANJA RUBIK — No. [Laughs] It keeps me going. It keeps me hyper. I like having different projects. The one that I’m going to do in Poland, it’s about sex education.

OLIVIER ZAHM — Yes, you’ve decided to develop, or to create, this political platform — is it that? What is the project called?

OLIVIER ZAHM — It’s to help the kids in Poland to have better access to sexual education, right?

ANJA RUBIK — Yes. It’s for everyone, really. For parents. And also for young people because it addresses… In Poland, in general, sex is still a very taboo subject. You don’t talk about sex. You are ashamed of sex. You are ashamed of being a sexual being. In Poland, sexual education isn’t called “sexual education.” It’s called “learning how to live within a family.” And at the same time, the new government is starting to restrict a lot of methods of contraception on the market. They made the morning-after pill prescription-only. Which is insane. It’s the only country in Europe that has this law now. I thought, “I have to do something!”

OLIVIER ZAHM — The morning-after pill requires a prescription from a doctor there?

ANJA RUBIK — Yes, it’s a new law. A prescription from a doctor. Which doesn’t make sense because you have only 72 hours. Most of those pills are bought on Saturdays and Sundays. So you don’t have the time to make an appointment, or the money, necessarily. Now they’re trying to change the abortion law. It’s illegal already, but they want to make it illegal under all circumstances. For example, if you were raped, you wouldn’t be permitted to have an abortion, either. If your life is endangered by the pregnancy, even, you’re not allowed.

ANJA RUBIK — It is an attack against women, but also against human rights. It affects whole families, as well. So I had to do something for my country and use my name, my face, and of course social media platforms.

ANJA RUBIK — Yes, every day this newspaper does a piece on it. And every day, there are videos online. I still have seven more episodes. It’s crazy, the impact. But it’s beautiful.

OLIVIER ZAHM — But what’s going on in Poland? Is this all because of a new government or is it something deeply rooted in Polish mentality?

ANJA RUBIK — Well, I want to say it’s only the new government, but obviously, people voted for this government. They won with only 23% of the country’s support because people didn’t go and vote. And then, in Poland, there isn’t a two-party system; it’s a multiparty system. And they are extremely right-wing, very close to the church. Poland is still a very religious, very Catholic country. We became independent not that long ago — in 1989. So, everything in Poland is still very new. The constitution is new. Our liberation, democracy, are new… Poland started to grow really fast, like it was on speed. But these changes are now going in the wrong direction: very nationalistic, very conservative, very religious. And against any sort of minority.

OLIVIER ZAHM — It’s also that Poland has always had a problem with their national identity, and also having been invaded so many times.

ANJA RUBIK — All the time. And it’s some sort of typical Polish identity problem. But we’re very good in moments of crisis. We learned that from our history. We are capable of banding together and fighting for something. The moment we have peace, we start to create enemies within our own people.

ANJA RUBIK — It’s a very strange thing for a country that was completely closed (because of the USSR) to suddenly be completly opened up. Some people haven’t yet adapted. These are the people who voted for the incumbent government.

OLIVIER ZAHM — It’s a pretty fascinating country. Because it looks sad, depressing, and it can be totally crazy.

ANJA RUBIK — Yeah. Well, you’ve got to create your own craziness in a sad and depressing place! No? [Laughs]

OLIVIER ZAHM — Because it’s a great country at the same time.

OLIVIER ZAHM — On a happier note, you’re a very positive and radiant person. You travel the world. You love artists. You love to discover countries. I’ve seen how excited you were to visit and discover Cuba.

OLIVIER ZAHM — I thought you were ready to become Cuban!

ANJA RUBIK — I almost was. Because, you know, I went there for three days, to visit my friend, this artist. And I ended up staying two weeks. The time after that was very similar — I loved Cuba.

OLIVIER ZAHM — And you have no fear.

ANJA RUBIK — I have very little fear. I fear for my family, and that’s it. I don’t have my personal fear.

OLIVIER ZAHM — No, but you have no fear in front of the camera. No fear to follow unknown ways or paths.

ANJA RUBIK — Well, you gotta build your own path, no?