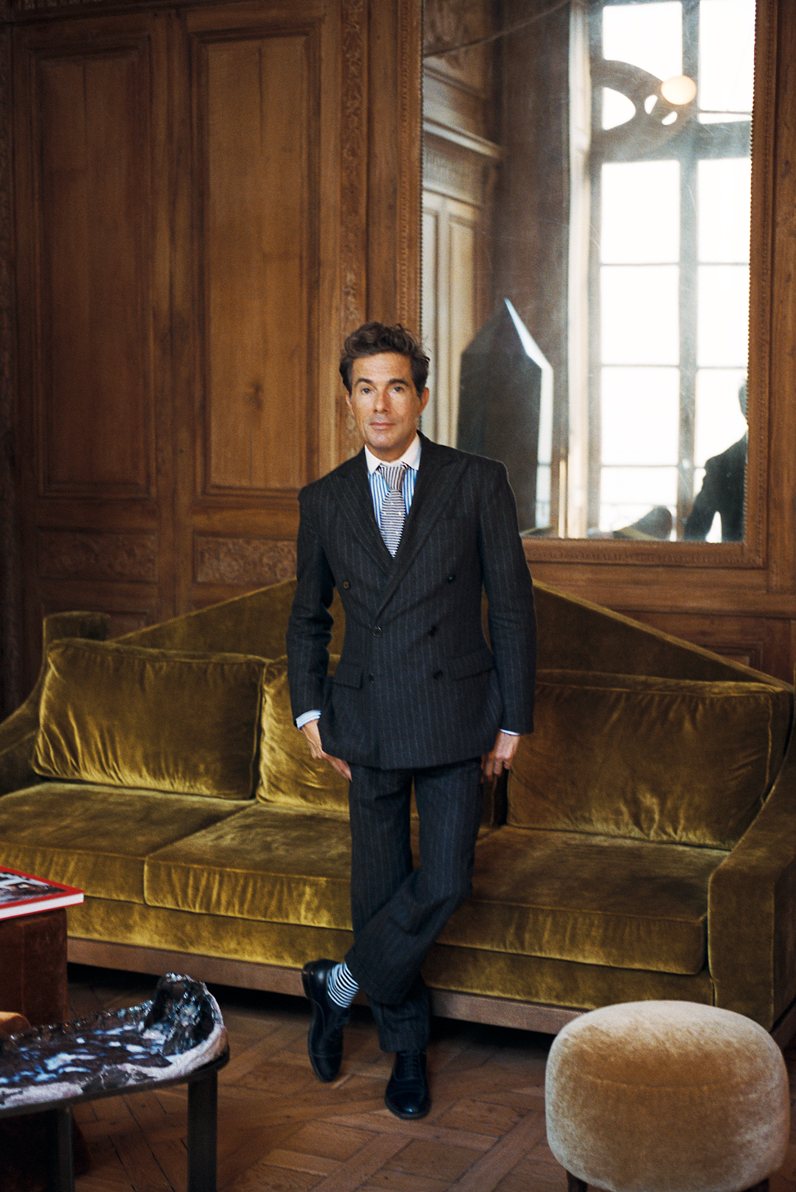 VINCENT DARRÉ — Indeed, it’s now no longer called the Maison Darré, but the Maison Vincent Darré. It’s closer to being my Maison than the Maison Darré, which was a furniture laboratory. It’s a return to a certain vision of the decorative arts. Since the restaurant Maxim’s was next door, the Rue Royale was symbolic of a whole French art of living. That’s what I hoped to reflect. I think the times are such that we should no longer be seeing objects of design in all-white galleries; we should be seeing them in places where people live.

OLIVIER ZAHM — And in this case, it’s your apartment.

VINCENT DARRÉ — It’s as if I were receiving at home. Since I sort of represent the Parisian of people’s imaginations, the idea is to reconstitute the salon of a Parisian eccentric, someone with special tastes. But I don’t show only my furniture. I mix in the furniture of other people, like Mathias Kiss, Eric Schmitt, Taher Chemirik, and Osanna Visconti, as well as old furniture and reeditions, like the lacquer columns and obelisks.

OLIVIER ZAHM — So it’s a great big blend, though unified by taste.

VINCENT DARRÉ — Yes. I think people find my taste a bit scary when it’s a total look. Everyone who’d come to my place would ask why I wasn’t receiving at home, as it were. That gave me the idea. Everything here is for sale. I’ve got table settings, antiques, books. Everything’s for sale, except for my ’30s teapot. That’s an old souvenir from 35 years back. 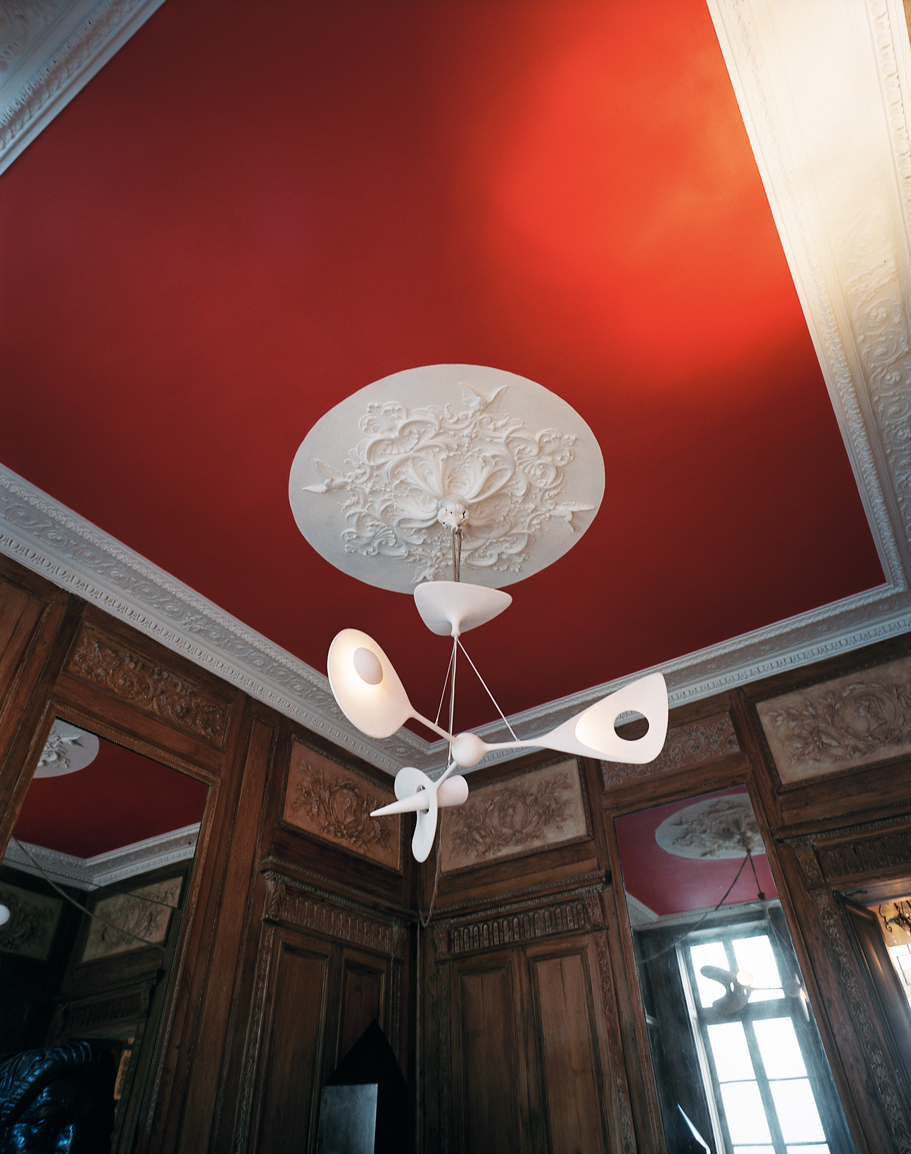 VINCENT DARRÉ — That’s more or less the idea. The idea that people could buy something that represents an art of living.

OLIVIER ZAHM — What you’re doing here is truly exciting because today we need to recover a genuine sense of things, a sense for the convivial. Our society has become too virtual. We want to meet the people behind the things.

VINCENT DARRÉ — I’ve asked people not to do Instagram. Now, that’s luxury! To demand that people not post on Instagram. Maybe that’ll be the future — discovering things that you can’t see on Instagram. Everyone who comes here tells me: “It’s incredible! We’ve never seen anything like it!” But, as you were saying, I think it’s the idea of re-creating Parisian salons as they once were. It’s the concept of the decorative arts. I’ve worked with the great artisanal traditions of France. Everything is made in France. I don’t think luxury comes from a logo. It comes from the rarity of things, and from French handiwork. My new collection is called Renaissance because through this work I’ve been reborn within, embarked on a new life. For others, it’s a continuation, but for me it’s the idea of finding something else. I think we tend to get stuck, and I don’t want to be stuck in Dadaism and Surrealism. I want to spark a renaissance because the inspirations are Baroque, and because the movement is different.

OLIVIER ZAHM — And how do you find these old artisans?

VINCENT DARRÉ — There’s a group called the Grands Ateliers de France. Lison de Caunes, who’s in charge of it, gave me all the addresses. Then, little by little, others fell into my hands. That’s the marvelous thing. You crisscross France and discover great workshops: tiny shops, threepenny shops, rich shops, etc. It’s truly interesting because it engages me in a dialogue. The gilder, Emmanuelle Cavalier, who does gold leaf, brought me samples of burnt wood and gold leaf. “Why do that?” I wondered. Lison de Caunes comes along with her straw marquetry and says, “Ah, we could turn it any which way, like this.”

OLIVIER ZAHM — This kind of artisanal collaboration is stimulating.

VINCENT DARRÉ — Yes. It gives me plenty of ideas, and it’s also another perspective. I used to design crazy furniture just to show what I could do. Now I’ve moved on to another stage.

VINCENT DARRÉ — Yes. I’m something of a performer.

OLIVIER ZAHM — Ensnared by your own desires.

VINCENT DARRÉ — It’s not ambition because I think we’re ambitious for what we want to accomplish. We’re not ambitious for money. We’re driven more by dreams of recognizing ourselves in work that really suits us. All artistic work is interesting if you do it purely and freely. 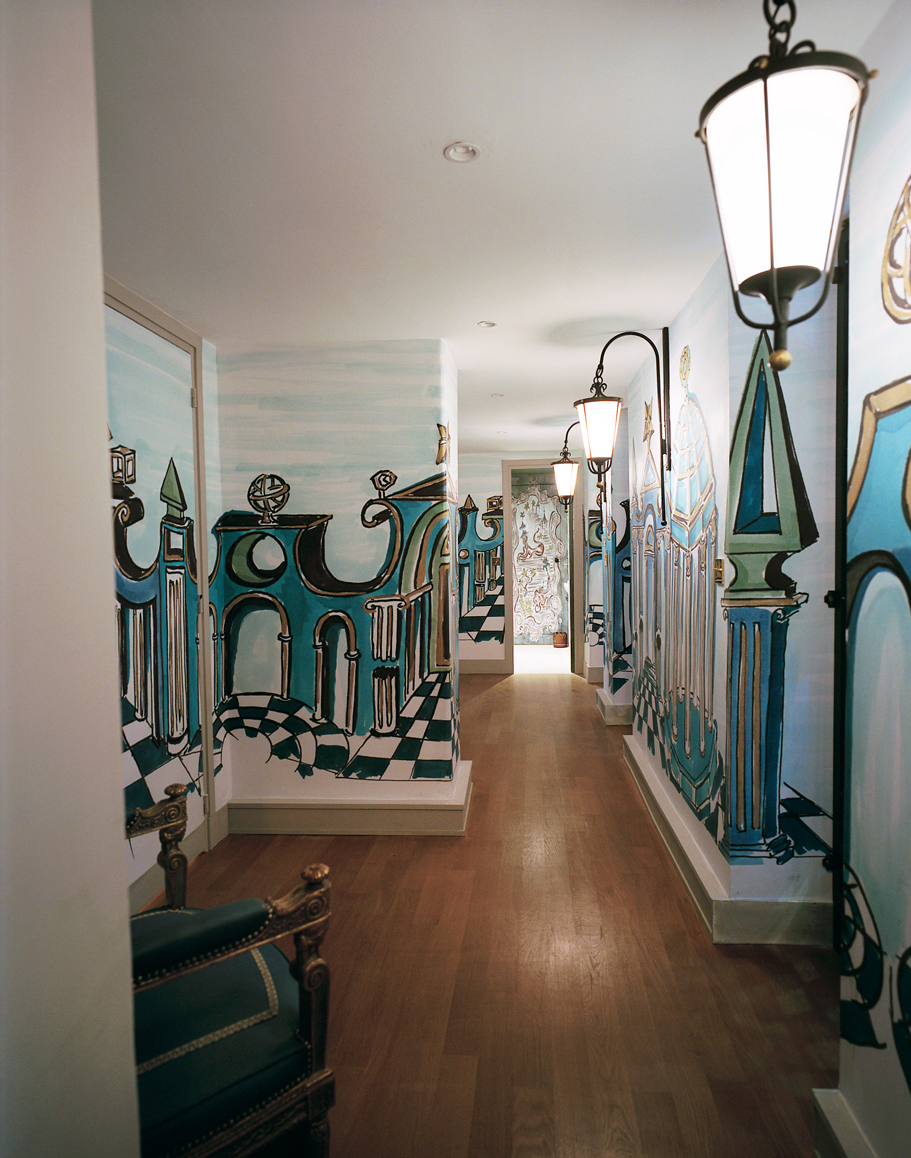 OLIVIER ZAHM — The great thing is that you’ve retained your passion. You’ve never lost your vibrant passion for decoration.

VINCENT DARRÉ — Whereas I no
longer give a damn about fashion design anymore, which I used to do. It’s funny how you can be passionate about something at one point and later realize that you no longer have any passion for it whatsoever. If you’d told me that a few years back, I’d have laughed.

OLIVIER ZAHM — But you’re still interested in style for yourself because you still dress.

VINCENT DARRÉ — Yes, but I dress in a traditional way. I find people very well dressed, and that’s the end of it. Before, though, I’d devour the fashion magazines. I’d keep up with what so-and-so was doing. I still do it because the images reach me through Instagram, but I have no desire to design a collection or work for a fashion brand. It’d be like going back to school. It’d be terrible.

OLIVIER ZAHM — So, you’ve reinvented the Maison Darré. You haven’t lost your inspiration — you have in fact renewed it, in discovering these artisans.

VINCENT DARRÉ — You have to hit bottom before you can become really strong, I think. I went through a real depression. I just couldn’t draw anymore. And I suddenly realized that things were taking off again. I wanted to put myself in peril. So, I got myself something gigantic on Rue Royale, with four-and-a-half-meter ceilings and 18th-century wood paneling that’s on the historical registry. It allows me to show another side of what I can do. It also allows clients to understand that you can mix things, and on top of that, it helps me realize dreams that I never thought I’d realize.

OLIVIER ZAHM — You actually take up residence in your creations. You bring them to life. They’re not merely demonstrations. There’s nothing worse than a showroom.

VINCENT DARRÉ — People think it’s a showroom, but no, it’s a real house. There’s a dining room, a bedroom, an office, a false bathroom. It’s really like an apartment…  There’s Valérie
Donzelli, for instance, who wants to read her new screenplay to some friends of mine, and they’ll critique it and tell her what they think. The idea is to have a genuine 21st-century salon. 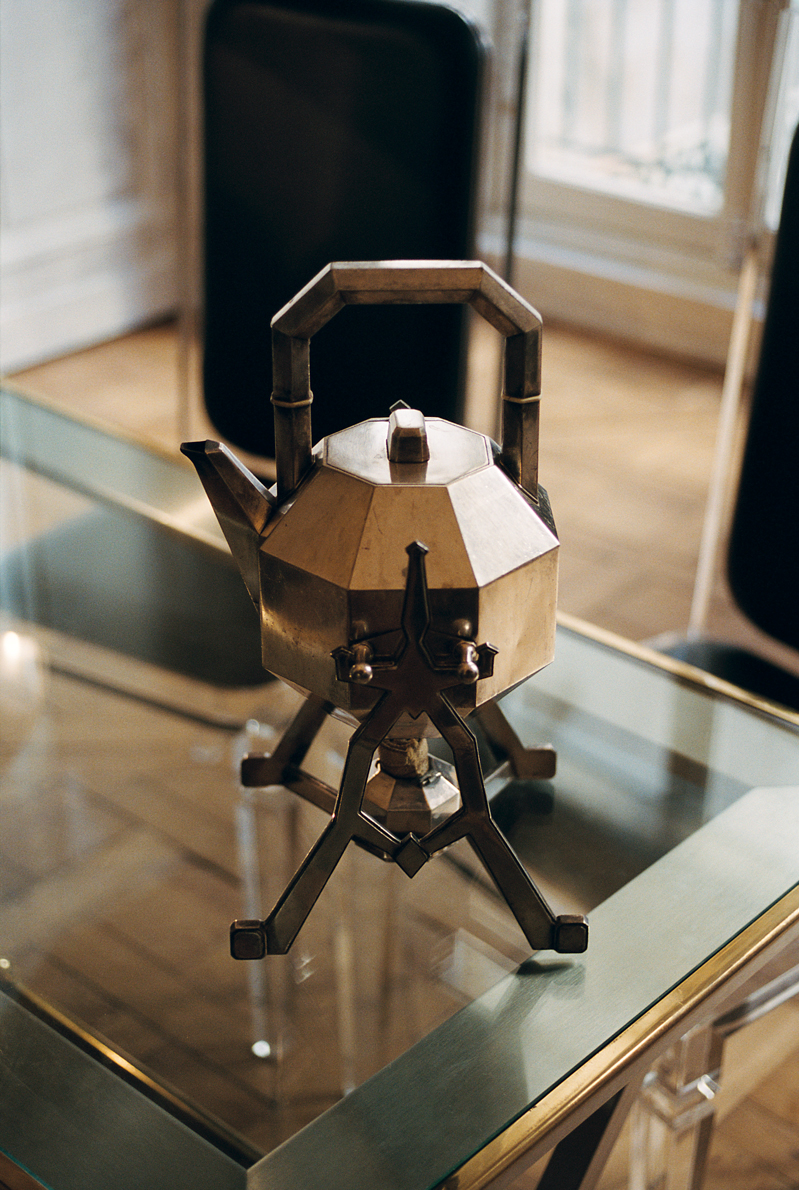 OLIVIER ZAHM — Have specific people, designers, or apartments influenced you?

VINCENT DARRÉ — Yes. I did the orange ceiling here because of Henri Samuel. He was the decorator who had the famous salon with the 18th-century wood paneling, the orange walls, and a big Balthus. It was a blend of things, just as Roger Vivier had also done in his apartment, which was photographed for L’Œil by Andrée Putman when she was a stylist in the ’60s. Roger Vivier was the first to mix modern art with a ball console table and an African mask. Let’s also mention Emilio Terry. He was a decorator who did the tent and the chinoiseries at Beistegui’s. He isn’t really a decorator or an architect. He designed baroque stuff. I still like Carlo Mollino. 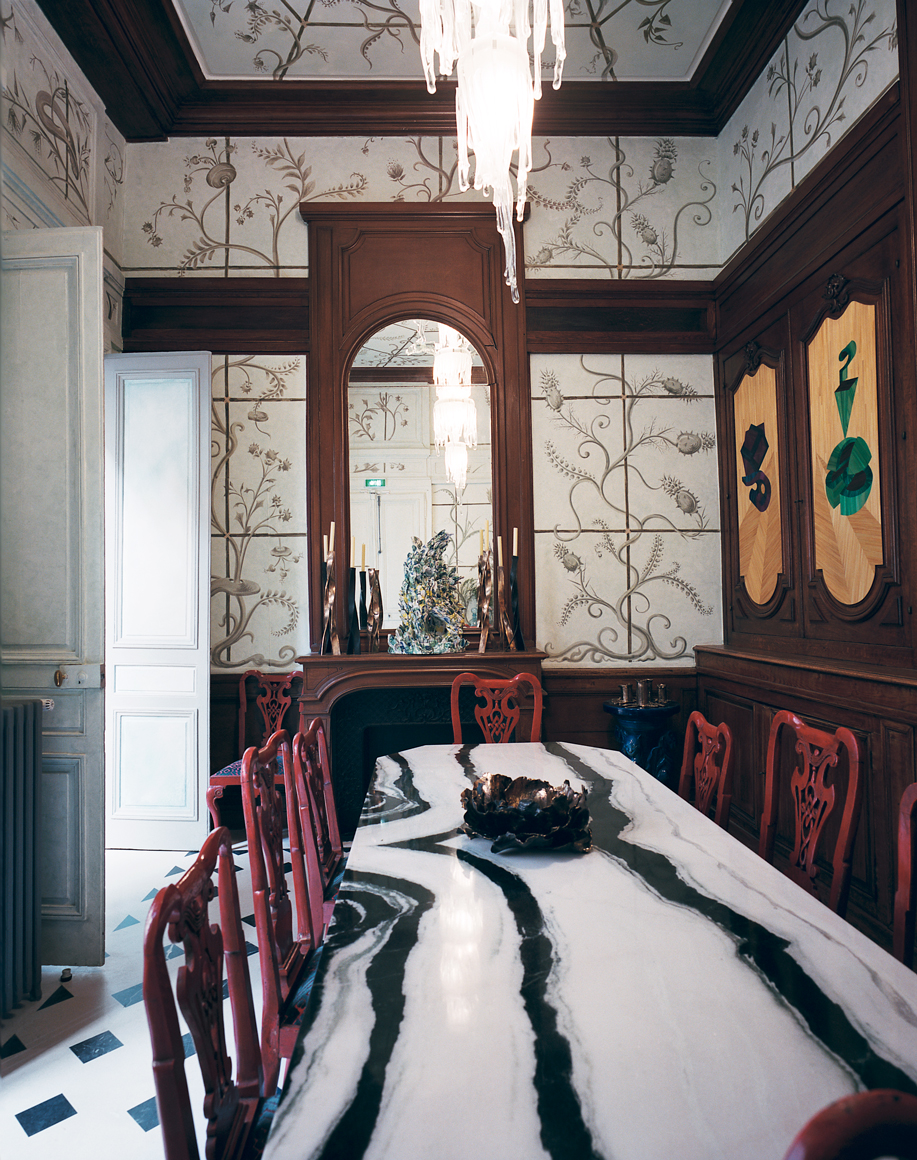 VINCENT DARRÉ — What I took from Karl was speed. Not stopping. You get rid of things and get new ones, never growing attached. 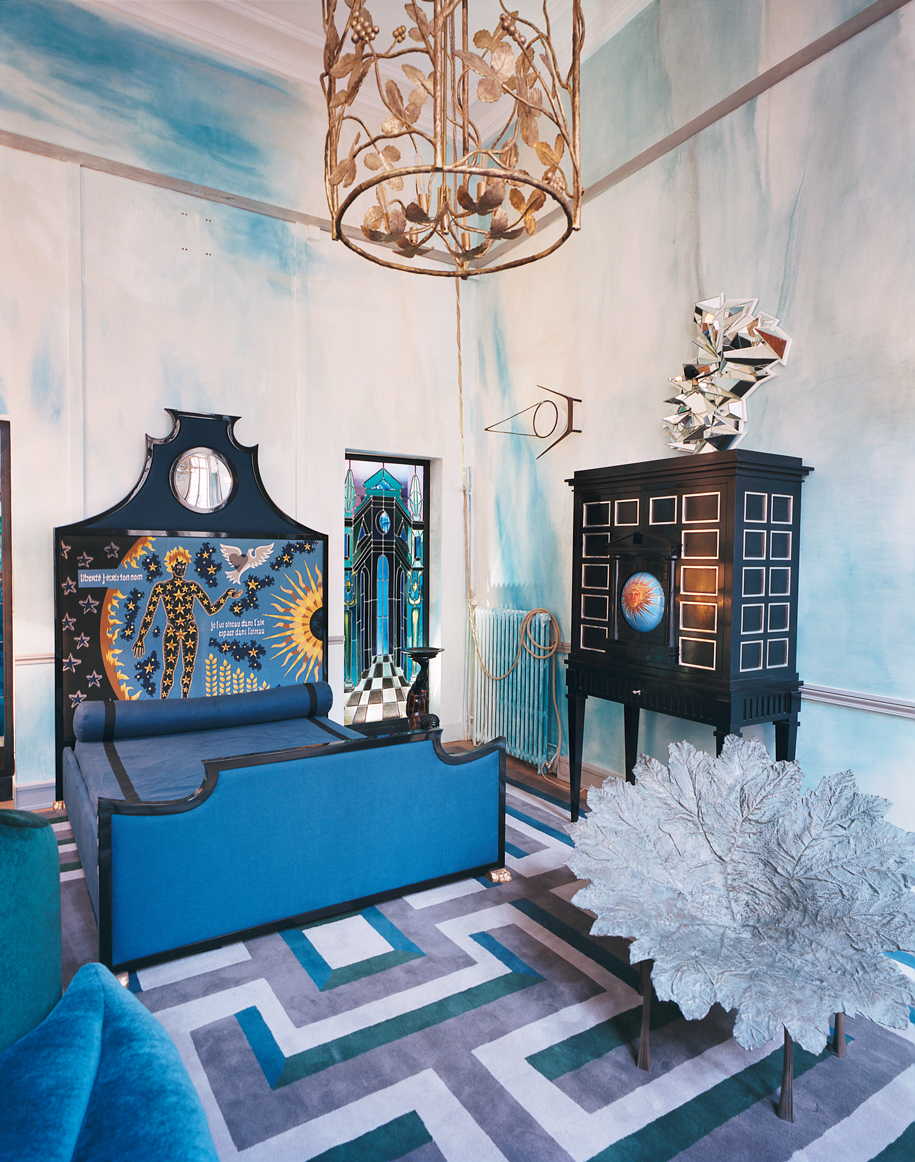 OLIVIER ZAHM — Not to grow attached is to be free.

VINCENT DARRÉ — Rising from the ashes — that’s the idea behind not growing attached to things and getting rid of everything. That way, you avoid having souvenirs and look only toward the future. Karl does that to reinvent himself, and it’s super smart.

OLIVIER ZAHM — Right, because otherwise we get trapped in our past. You make me feel like going home and throwing everything out.

VINCENT DARRÉ — You’d have to change houses. That’s what I hesitate to do.

VINCENT DARRÉ — It’s an old view of decoration that’s much closer to mine, much closer to the decorative arts. Something much more theatrical. Paul Poiret for example… His sister-in-law was married to Groult, who made furniture. He worked at the Martine shop, which made furniture. And all the connections with Schiaparelli, which had its store done by Jean-Michel Frank, who commissioned Christian Bérard. That whole era when people had their stuff made by others friends or artists. Everyone was connected to everyone else.

OLIVIER ZAHM — You don’t like minimal design, but theatrical objects?

VINCENT DARRÉ — Objects of design are fine for others, but they don’t work for me. For me, design already verges on the “industrial.” I don’t know why. It feels modern, and I don’t feel modern myself. I have a more eccentric taste. In any case, nobody says “decorator” anymore. Now we say “interior architect.”

OLIVIER ZAHM — Do you like to be called a decorator?

VINCENT DARRÉ — Yes. I’m not anything else.