portrait and interview by OLIVIER ZAHM 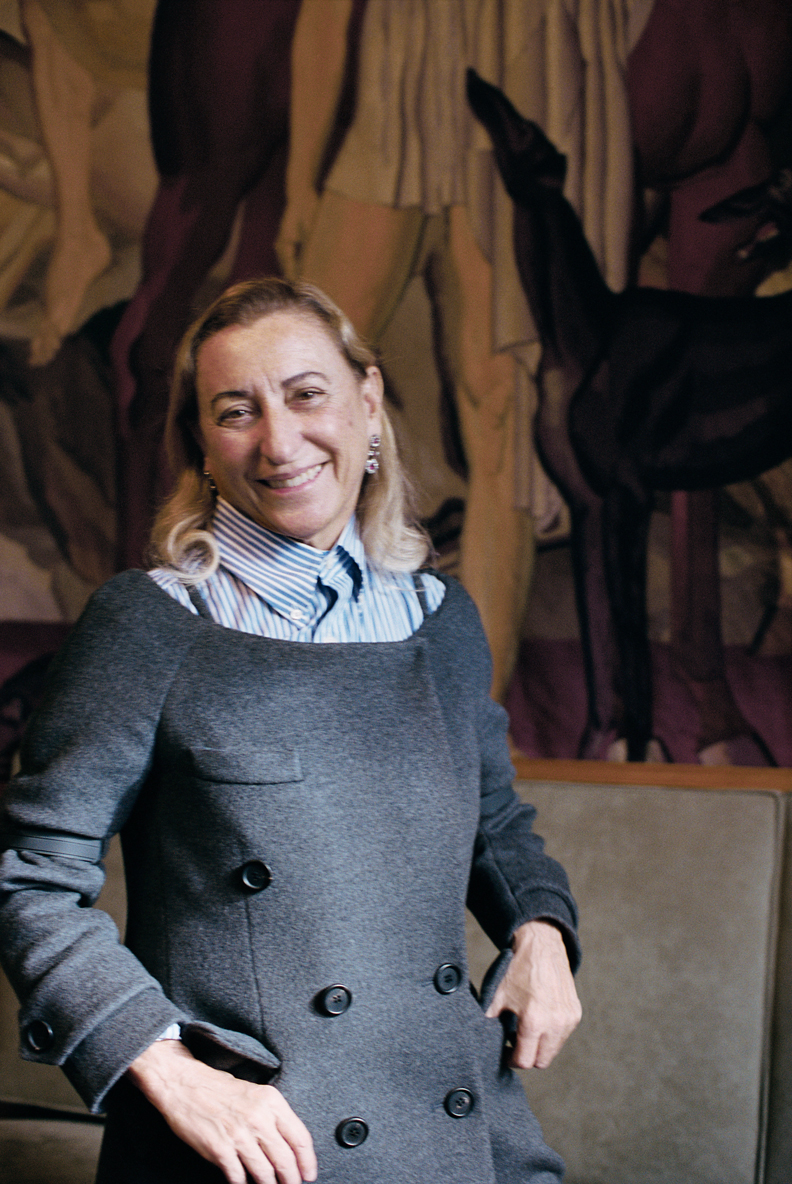 OLIVIER ZAHM — What do you do to stay relevant to what’s going on in fashion? I mean, it’s been more than, what, 30 years?

OLIVIER ZAHM — The cycles of fashion are getting shorter and shorter. Designers show up, and after three to five years, they disappear. Do you have a secret?

MIUCCIA PRADA — First of all, I want to react to what you said earlier about how magazines are doing these days. It’s true: the editing is fundamental. I think that magazines are important because you have a selection of thoughts, of different people, and you can read them. Sometimes I say that even in politics, I would need a master — a teacher — somebody who can explain reality. And that’s how I feel. I was educated in many areas. I was Catholic and, later, communist. I studied everything — I miss it now. I was researching philosophy, politicians, writers, who were trying to explain to you what was happening. I was
told, “That’s an old-fashioned way of thinking.”

OLIVIER ZAHM — How do you navigate the world today and its variety?

OLIVIER ZAHM — You need a clear perspective to cut through all this information.

MIUCCIA PRADA — We need more and more writers and editors, whom you trust. They help you understand. This is what we need from magazines, too. You need editing, you need commentary, you need explanation, you need somebody partially thinking for you!

OLIVIER ZAHM — Because you always approach fashion, and your collections, as something that is part of the world. It’s not just an aesthetic point of view.

MIUCCIA PRADA — Yes. Absolutely not. That’s probably why I don’t feel the heaviness of the job. My job was never “only clothes.” Clothes are a representation of my thoughts, of my feelings.

OLIVIER ZAHM — Is it a more conceptual approach to fashion design?

MIUCCIA PRADA — No, It’s because I am alive, because I live life, and I see, I study, I learn. It comes naturally, so far. So, I think it’s not a question of having a secret, but my approach to my work stays the same. It’s not just about clothes. At the end, well, yes, it is.

OLIVIER ZAHM — Do you still love fashion as you used to?

MIUCCIA PRADA — Absolutely, because fashion is interesting. And it’s part of a bigger picture. So, it doesn’t feel boring to me.

OLIVIER ZAHM — In a way, your collections and your clothes, and your design, are a — might we call them an objectification?

OLIVIER ZAHM — Of your own mental process? Your mental evolution.

MIUCCIA PRADA — Yes, absolutely. In addition, I have to do so many shows! More and more!

MIUCCIA PRADA — So I changed point of view. I said: “Okay, these are not shows. these are episodes … episodes from a moment of thinking.” For example, this show was about — did I tell you before? About the girls?

OLIVIER ZAHM — No. You didn’t.

OLIVIER ZAHM — You seem to be very inspired and free right now.

MIUCCIA PRADA — This year, I felt a sense of liberation. I wanted to go back to my freedom and get away from the heaviness of luxury, of the brand, and somehow…

OLIVIER ZAHM — And be more direct in your approach to design.

MIUCCIA PRADA — Yes, and more naïve, direct. Of course, somehow the spirit of the ’90s was there.

MIUCCIA PRADA — Yes. But I remember that I did shows that would be unthinkable today!

MIUCCIA PRADA — I remember the first show. Back then, they hated it. Probably today they would think it the height of avant-garde! The trashy shows of Miu Miu, with transparent nylon — today? Impossible! There was a lot of freedom. After that, there was again this heaviness of luxury.

OLIVIER ZAHM — So, you’re back to the beginning, in a way.

MIUCCIA PRADA — Yes. To that sense of freedom.

OLIVIER ZAHM — I can feel it in your recent shows. [Laughs]

MIUCCIA PRADA — I’m really fed up. I don’t listen to anybody. [Laughs]

OLIVIER ZAHM — You know, when I posted the picture of your show on Purple Instagram, I captioned it “new lightness.” I could feel this lightness.

OLIVIER ZAHM — So what would be your definition of luxury?

MIUCCIA PRADA — I never wanted to answer the question. I heard the most horrible and stupid things about it! So, I always refused to give a definition. And anyway, “luxury” is not trendy anymore. Now, there is the word “millennial.” Everybody talks about millennials.

OLIVIER ZAHM — What does this mean, exactly? “Fashion for millennials?”

MIUCCIA PRADA — Exactly. It reduces youth to a commercial category. So, the term “millennials” is used to mean “people to sell something to.” Not people with different ideas. It treats them as though they are just one commercial identity, but this generation is so much more complex! So this definition of “millennials” as a category is offensive to young people, I think.

OLIVIER ZAHM — Are you saying you don’t have a working process and just follow your intuition? You follow the evolution of your mind.

OLIVIER ZAHM — You are constantly trying to understand what’s going on around you and in the world.

OLIVIER ZAHM — But isn’t it more and more difficult to understand where we are going? Does contemporary art influence you or help you?