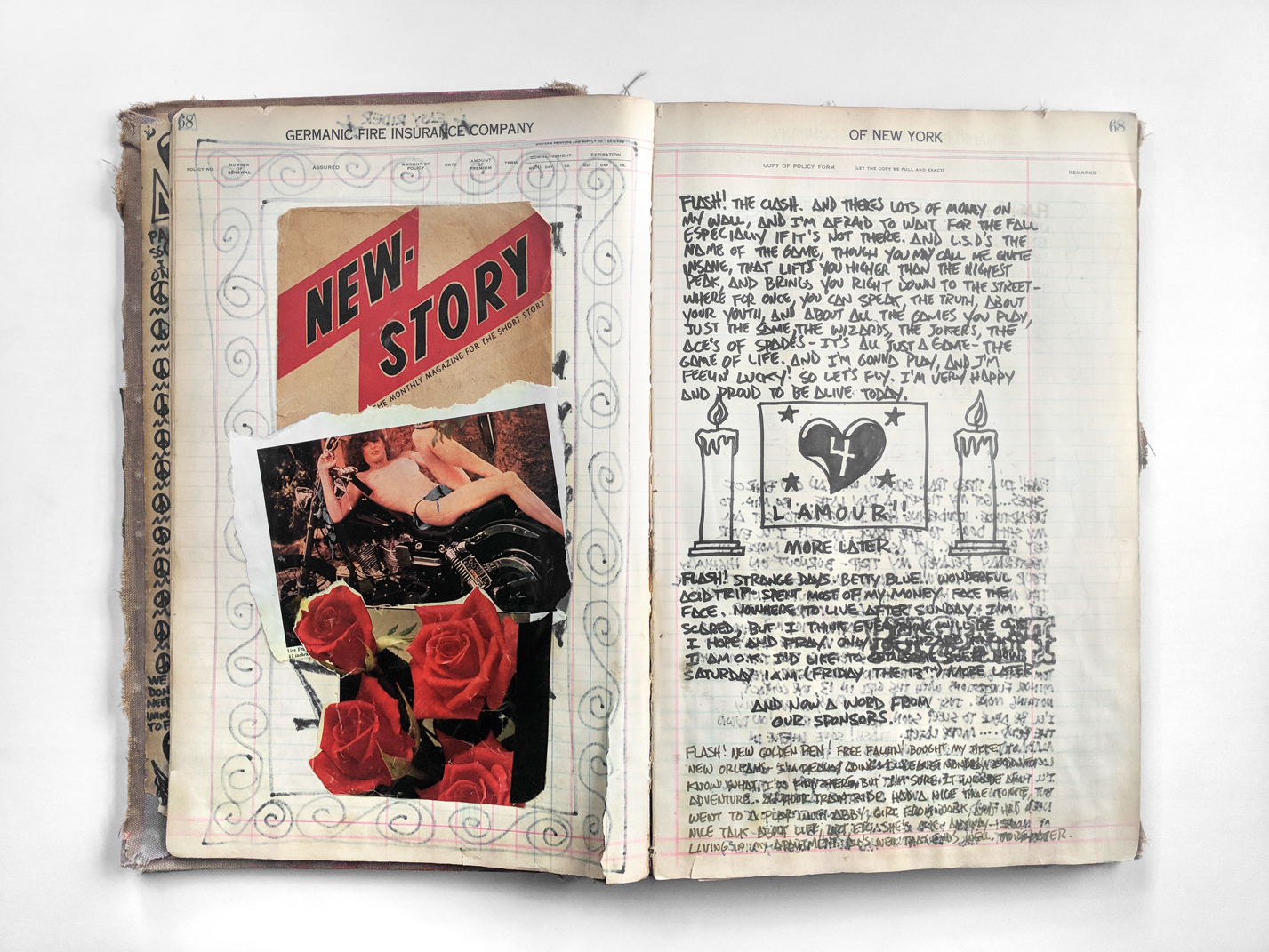 OLIVIER ZAHM — Your name has always been associated with the counterculture or the underground. You come from California — from a skate, graffiti, fanzine subculture, in the late ’80s, beginning of the ’90s. How do you see subculture, or counterculture, today? Does it still exist? Is it still relevant as a concept, or as a context?

AARON ROSE — I wrote an essay for a book that we put out a few years ago [with Mandy Kahn], called Collage Culture: Examining the 21st Century’s Identity Crisis. The title of my essay was “The Death of Subculture.” I used to think that the reason why subculture was able to exist was because it was able to gestate in private, without the eyes of the public on it. There were years and years and years of, like, 20 people doing something, and the public couldn’t see… Now it’s so easy, with social media and the Internet, for people to find things. So, things never really have time to totally gestate and to grow into something on their own, before being co-opted. I do feel that, in some ways, a certain version of subculture has died. At the same time, I still think that kids will always be kids. There’ll always be rebellion in teenage life, and it will never completely die. I feel like it’s biological. But the subcultures that existed when I grew up are completely finished.

OLIVIER ZAHM — Is California still a place for underground culture — because there’s space, and there’s also some unidentified space, or margins?

AARON ROSE — Yeah, that’s true. Which is probably what keeps me in LA. No matter how far out you go, there’s always one place next to it with some amazing thing, you know. And as long as you’re okay with driving, then you can see everything. My generation — not the first one from the ’50s and ’60s — is like the second generation of surfing, skating culture, whatever, but is the first that has gotten itself into a place of power, in terms of having media power. I feel like it’s become part of just the general fabric of society now. And though there are still kids doing it in really underground, super-crazy, illegal ways, it’s in the mainstream culture now. Like, solidly in the mainstream culture.

OLIVIER ZAHM — Yes, this is even the image for the mainstream culture. 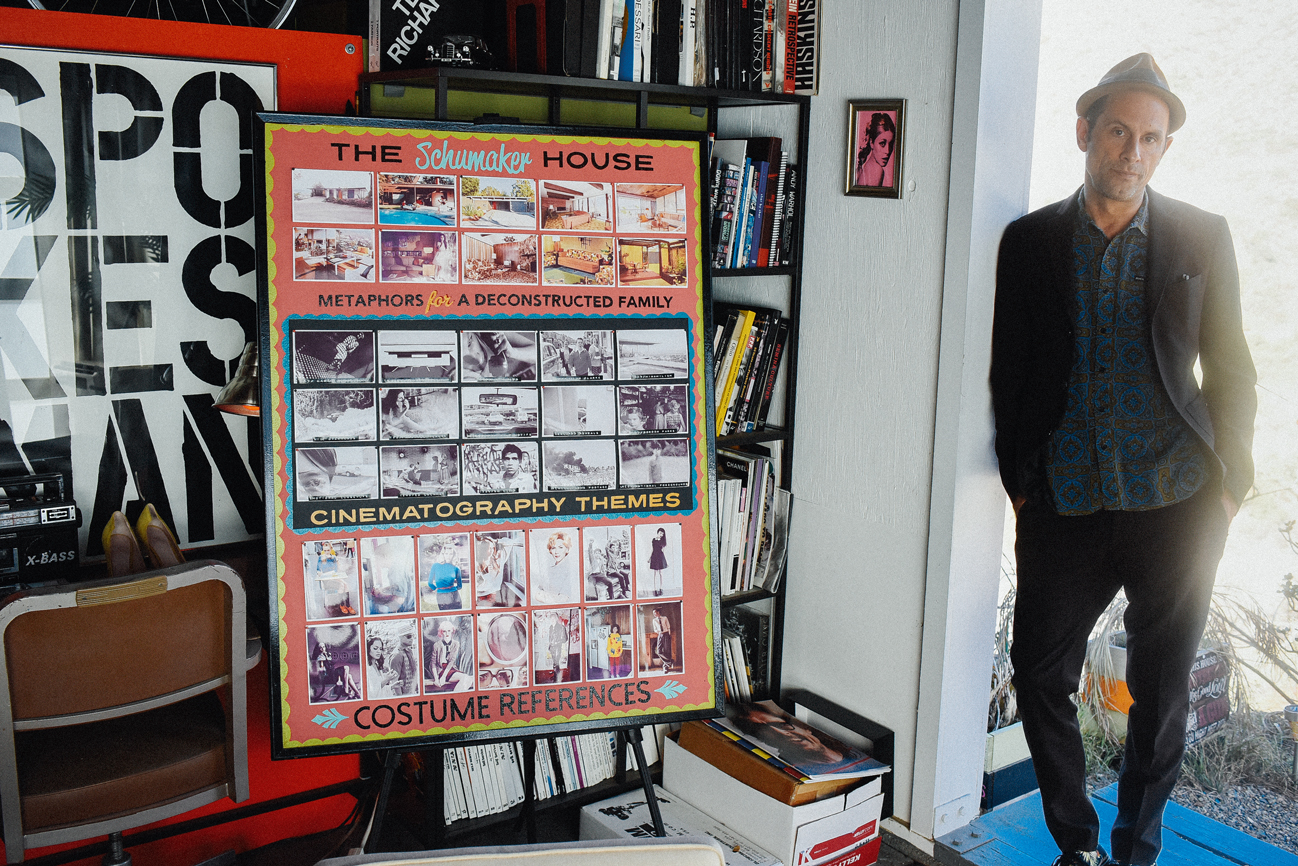 AARON ROSE — It is. You see it in commercials for banks.

OLIVIER ZAHM — Yes, exactly. [Laughter] But you still have kids who skate in abandoned swimming pools.

AARON ROSE — Of course. Still getting arrested… It’s a super-interesting dichotomy, the fact that that can exist in the culture.

OLIVIER ZAHM — And what do you think of the culture of fanzines? Because you always loved fanzines. 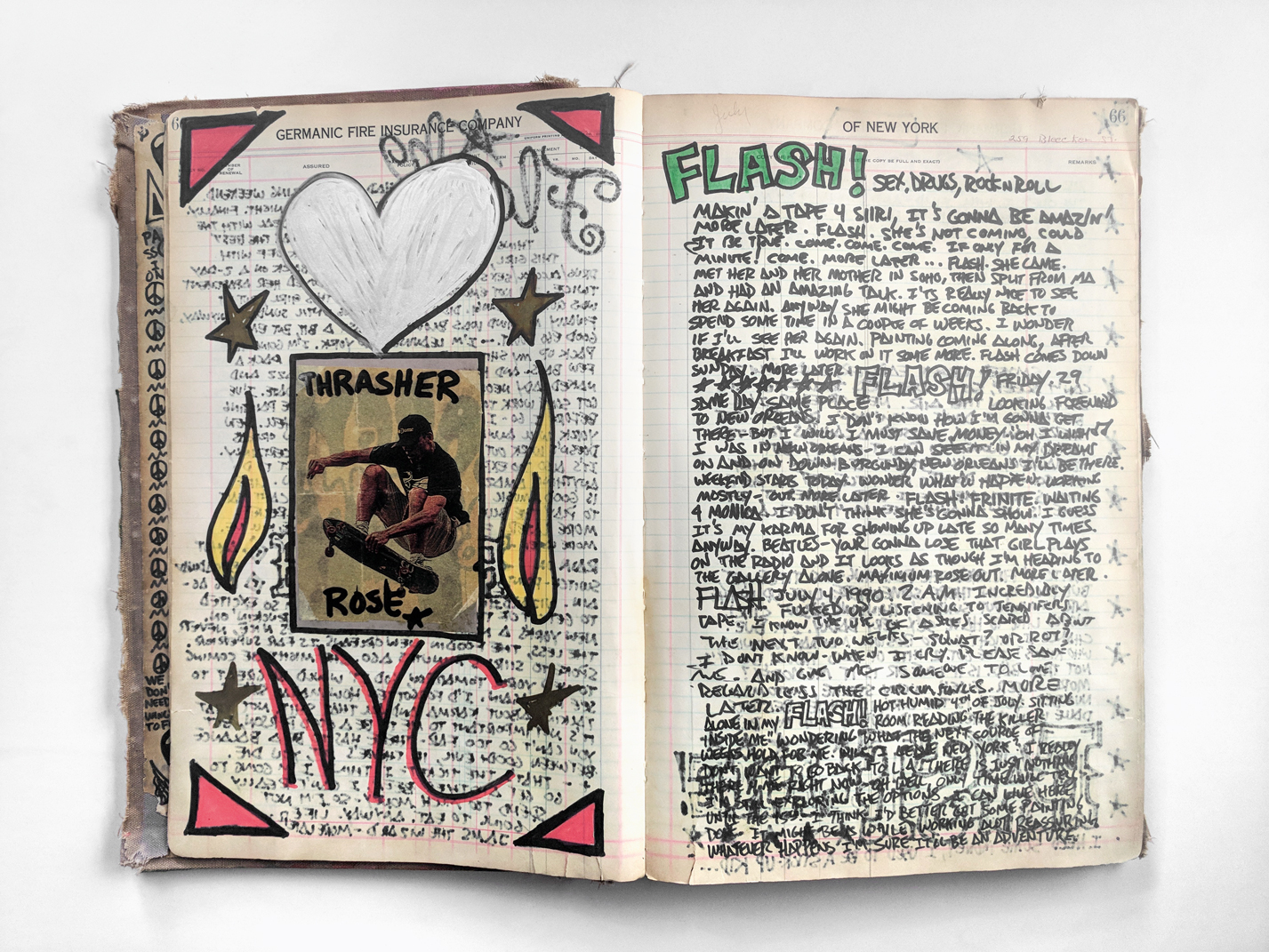 OLIVIER ZAHM — And what about your personal journal, or diary — you used to write in it every day?

AARON ROSE — Almost every day. I was living in New York, but I carried it with me all around the world. This giant book.

OLIVIER ZAHM — This is designed like a fanzine. Let’s speak about it. It’s not only about writing your emotions or what happened to you during the day — it’s also about composing a page. Graphically.

AARON ROSE — Yes. But I came from that, you know. I did fanzines all through my teenage years. And that was the way it looked. I didn’t go to design school or anything like that, but it’s how I looked at what a page should look like. It should have some sort of visual element to it. Also, one thing that’s very interesting about the journal is that, at the time — I still am a bit, but more so at that time — I was very interested in the ideas of witchcraft. And so I would pre-draw pages ahead, the visuals. And later I would see if life, what I was writing, matched the picture. And most of the time, it did! [Laughs] The Doomsday Book is what I titled it. 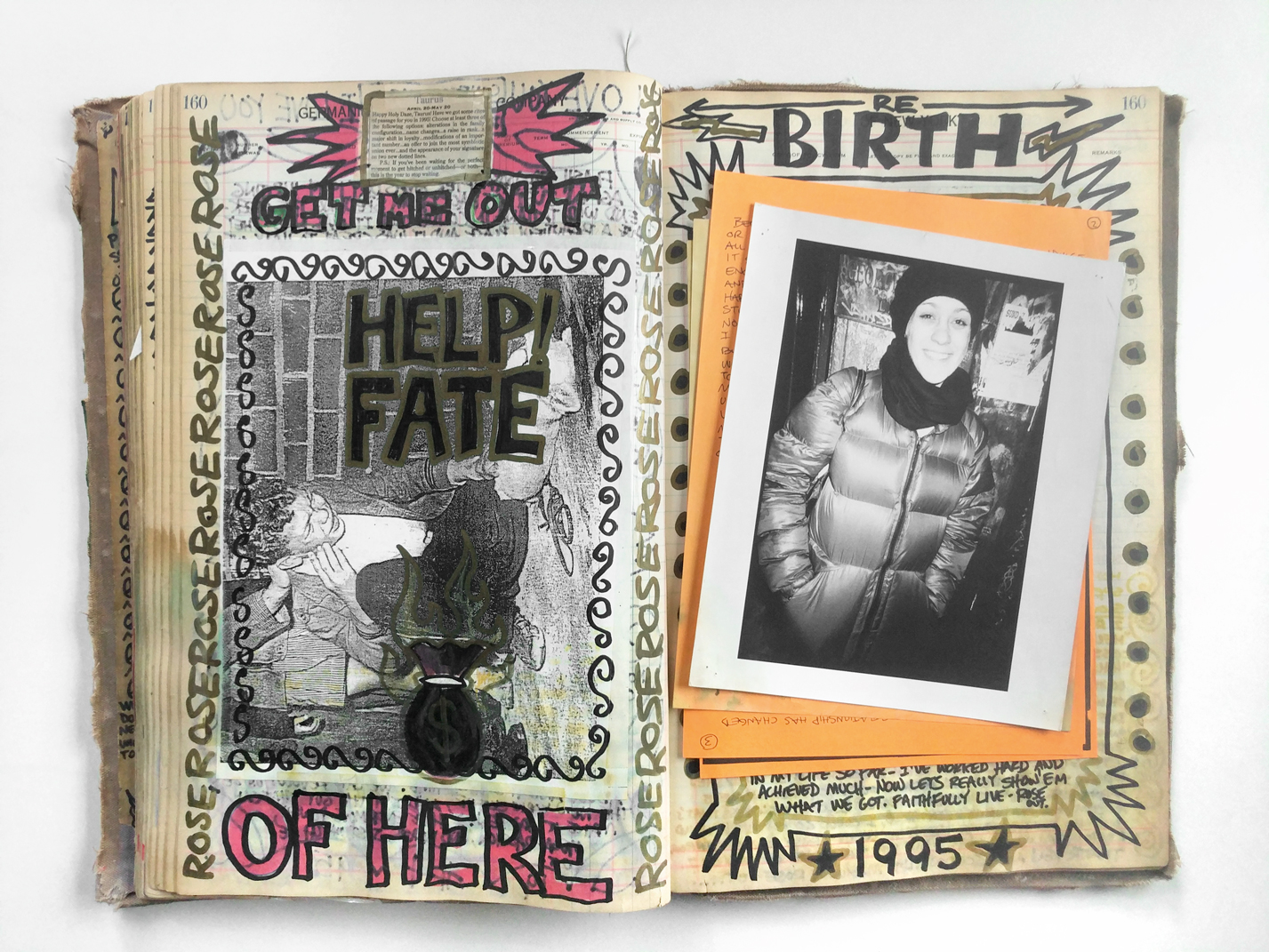 AARON ROSE — In parts, yeah. I was really strung out for part of it.

OLIVIER ZAHM — Because you were drinking a lot at the time?

AARON ROSE — Yeah, yeah. Drinking tons, too. But mostly drugs. I write about it tons, too, in the book. 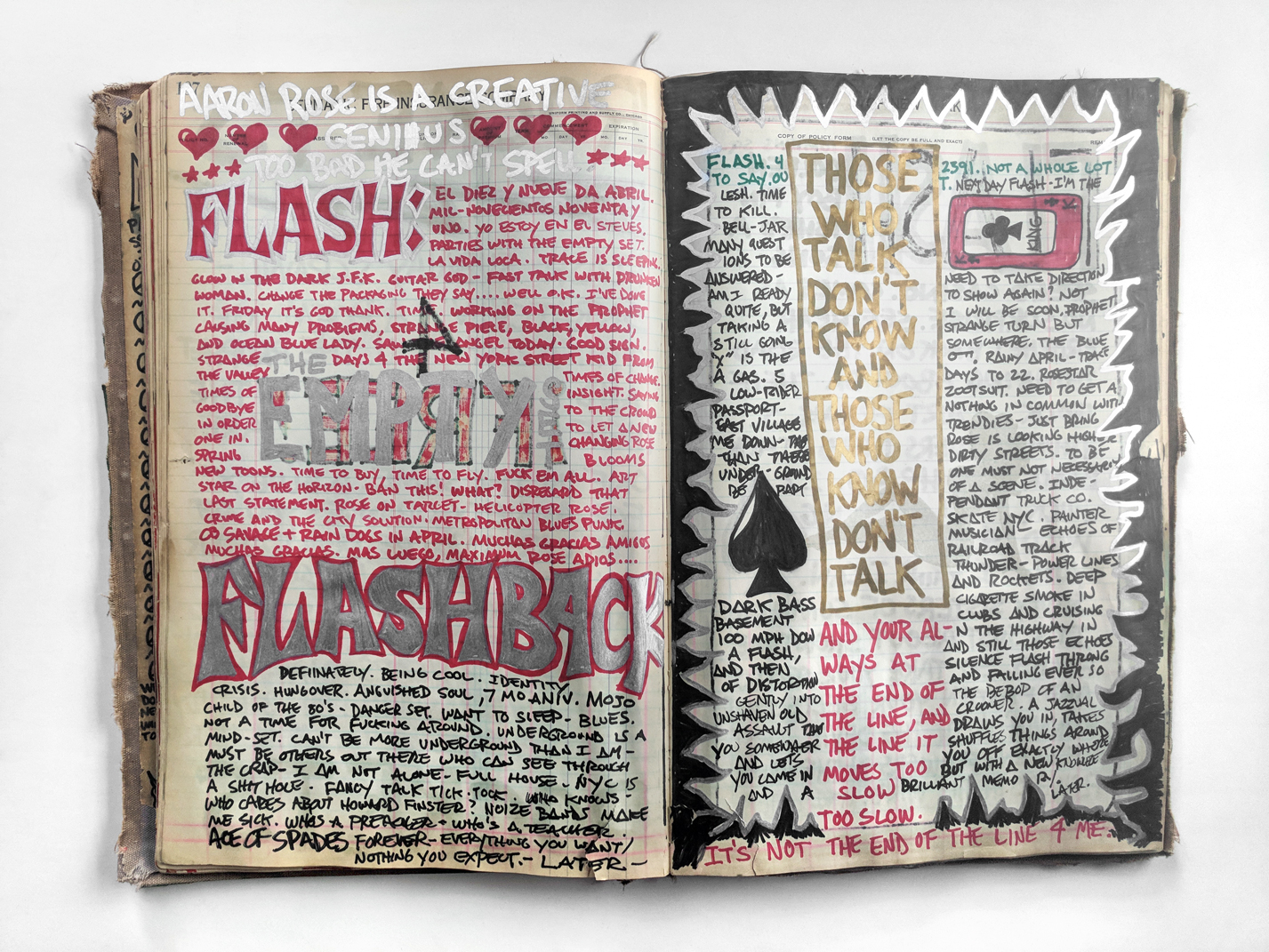 OLIVIER ZAHM — You also very quickly realized that it was important for you to create a gallery — to give visibility, or recognition, to this subculture.

AARON ROSE — Yeah. Well, those were the only artists that I knew. I didn’t really study art. I don’t have a degree. When I opened the gallery in New York in 1992, I had never been to a gallery before — apart from seeing shows through Metro Pictures. [Laughs] I actually had never been to an art gallery. [Laughter]

OLIVIER ZAHM — And this was a move to go from LA to New York, to open your gallery. Was it important for you?

OLIVIER ZAHM — Because New York was the center of art at the time? 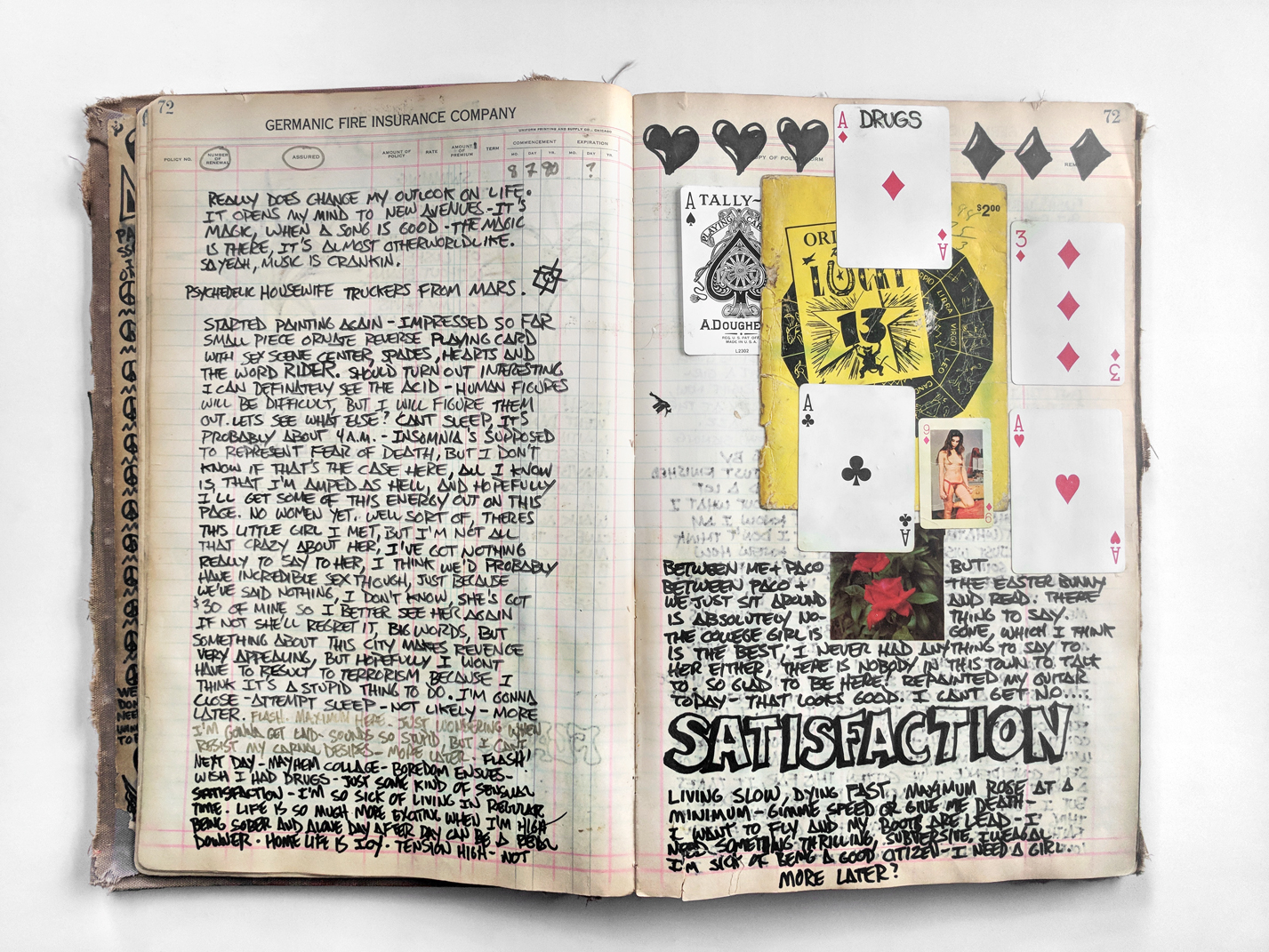 AARON ROSE — Yeah. It was the center of everything. LA was terrible in the late ’80s.

AARON ROSE — Just the whole scene that I came up in, the punk scene. Skate and punk — it was really mixed in together — it all crashed and burned. There were no more shows. Stores closed. Everybody was kind of scattering off, going to college or whatever. So, the scene was dead.

OLIVIER ZAHM — And why did you come back to LA 15 years ago?

AARON ROSE — Yeah, 15 years in LA. I came back to LA for the same reason that most people are moving to LA. Because I had less money then. Yeah, I couldn’t afford New York, and I had a lot of personal problems, and sometimes in life you can just feel it’s not right.

OLIVIER ZAHM — Yes. Now it’s, like, an exodus to LA. All of the creative community is coming to LA.

OLIVIER ZAHM — A little bit of fashion. Step by step.

AARON ROSE — Yeah. Well, there’s space. Like we said before.

AARON ROSE — And you can afford to be experimental.

OLIVIER ZAHM — There’s an open mentality, in a way. And the search for an alternative lifestyle — it’s always had quite a West Coast label. Like, how can we live in a different way?

OLIVIER ZAHM — And your house is an artistic project. You never dissociate your work and your life from your artistic interest. It’s all combined, right?

AARON ROSE — Yeah. Any house is a work in progress, but the goal is to eventually make it a foundation — when I’m older, or when I die. Because its location is right next to the Hollywood sign. There are so many tourists all the time. I want to make it a museum, by appointment. It’s full of my personal collection of artworks, posters, paintings, rare books, records, magazines, fanzines. The idea is to turn this old Hollywood house into a kind of research foundation, open to the public. But this is, like, 40 years from now.

OLIVIER ZAHM — You have to buy the house first!

AARON ROSE — [Laughs] I know, that’s not easy! But I know the owner, and I’ll be the first to make an offer — hopefully at the right price. There’s so much real estate specualation here.

OLIVIER ZAHM — And you also have a film project happening. In the meantime, you became a filmmaker.

AARON ROSE — Most people don’t know this, but when I was running the gallery in New York, I was also working as a film director, for music videos, mostly for MTV. Because we didn’t sell any art in the beginning, I had to support my gallery, making films. So, I was working at MTV, but it was just my job. It was fun, but not super-creative. That was where Harmony Korine produced his first film actually, for MTV. And with Rita Ackermann… But then, when the gallery started to get more successful, I stopped doing film. When I came back to LA, doing films again made sense because the resources here are huge for making films…

OLIVIER ZAHM — And can you speak about your project? It’s a long feature, right?

AARON ROSE — It’s loosely based on real events. But not really so much on real people. And it’s called Case Study. It’s rooted in the idea of these Case Study Houses that were so popular through the mid-century modern movement in the ’30s and ’40s in LA. It’s the story of one family over three generations, starting in the late ’40s. And then they have children who grow up in the ’60s, and then those people have children who grow up in the ’80s. And it’s a study in Los Angeles’s counterculture, through the lens of one very left-wing family. So, the grandparents were communists and architects. Then they had hippie kids. And then the hippie kids have surfing, skating, punk kids.

OLIVIER ZAHM — [Laughs] So, in a way, that’s the evolution of counterculture in…

AARON ROSE — In the late 20th century. Late-century counterculture in LA. But it’s a narrative. It’s a family story. It’s a scripted family.

OLIVIER ZAHM — And you wrote the script?

AARON ROSE — I co-wrote the script. And I have a team of producers. It’s already been five years. We haven’t even shot anything yet.

OLIVIER ZAHM — How do you see this evolution of digital, social media platforms for kids today? What’s your point of view? Because it’s the opposite of your sensibility, in a way.

AARON ROSE — It is. It makes me nervous. I mean, I love it because it’s super creative. And to see young people being creative like that all the time — it’s so different from the people I grew up with. There were very few creative people, you know.

OLIVIER ZAHM — There was a small group of you.

AARON ROSE — A small group of creative people. And now this has given everyone the opportunity to express themselves. Whether it’s good or bad, it doesn’t matter. One thing that I worry about, which is the opposite of say, my journal, is that there’s no built-in archive for this work that’s being created. Sociologists are already speaking about this idea that digital archives — all of these images will be lost. Because nobody is archiving. You know, the companies that are doing the platforms aren’t really archiving. And the people aren’t archiving. If the people go away, all of the pictures go away, too. There’s no digital archive. And that makes me very nervous because it’s really like a digital dark age. Everything that is being created right now on social media will be lost.

OLIVIER ZAHM — It’s also quite limited in terms of freedom of expression — no tits.

AARON ROSE — And especially because you can attack anonymously. That’s the most frightening thing about it. I think dialogue and argument are super-healthy — but show your face.

OLIVIER ZAHM — So, it’s quite paradoxical. Everyone can express their point of view, but at the same time, there’s a sort of political correctness that keeps people safe.

AARON ROSE — There’s always some people who have the courage to do it.

AARON ROSE — We’re working on the new issue starting tomorrow. It’ll be out in March. I believe in print­­ — the tangibility of it.
I still believe people need to touch things. It’s a human need, to touch pages, to hold the object, to collect what you love, to remember where you came from  and be able to go back to it.