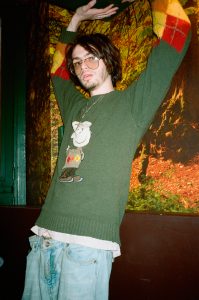 OLIVIER ZAHM — When did you create Midland, your casting agency with Rachel Chandler?

WALTER PEARCE — One year ago, from September. Rachel just called me one day and was, like, “We should start a company.” We are complementary. She’s good at finding a specific type of strong, older woman. And I’m looking more for street kids.

OLIVIER ZAHM — What’s it like to set up a company in New York these days? Everyone is criticizing New York, saying it’s become expensive, commercial, neurotic, and politically correct.

WALTER PEARCE — Personally, I hardly go out in New York. You’ll rarely see me at the clubs in New York anymore. Usually, with my friends, we’ll party at a house or something. I’m not really inspired by anything outside — nightlife here. Everyone’s, like, “Look at me! Look at me! I go to art school.” But in terms of running a company here, it’s actually a nice place.

OLIVIER ZAHM — New York has always been about business.

WALTER PEARCE — It really is. That’s all anyone ever wants to talk about. That’s all anyone wants to do. If you’re here, that’s probably why. So it’s a good place to get clients — there are a lot of clients here for us, for casting. And even for clients from anywhere else in America, it’s easy. You need to be based here.

OLIVIER ZAHM — So you did amazing work for Hood By Air, casting the shows. You’re famous for that. And that was a sort of micro-revolution in New York.

WALTER PEARCE — Hood By Air was so good because it was really out of place. All there was in New York fashion world was commercial clients. And now I think there are a lot of young designers… Like Vaquera. They’re nominated for CFDA [Council of Fashion Designers of America Fashion Awards] this season. There’s more room for these young talents — you know, these different, cooler people who are less commercially minded. More artistic. Still selling clothes, obviously, but…

OLIVIER ZAHM — With an artistic mind.

WALTER PEARCE — Exactly. Now that Hood By Air is on hiatus, Vaquera is probably my favorite show to cast in New York. That said, I don’t think they’d be able to exist in the capacity — or be looked at in the capacity — that they are now if Hood By Air never happened. I think it opened the floodgates a little bit. Now, we do basically all of the good shows in New York. Rachel does Eckhaus Latta, which is quite nice. I did the street casting for Helmut Lang, which Shayne Oliver designed. Clients who, a year ago, I would never in a million years have imagined would want to work with me — I’m now working with them on every campaign. It’s crazy. It could not be a broader spectrum at this point.

OLIVIER ZAHM — How do you pick someone on the street? On the subway, or even on Instagram?

WALTER PEARCE — My work as very context-based. I like messing with context. So, whether that means putting a well-known model in a weird thing, with a more out-there stylist, or whether that means putting a rougher-looking boy, or someone just very strange looking, with a more traditional client — I think there’s a lot of room to play with context. Even in commercial casting, you can still do things in these ways. I try to look at all the jobs under the same light. I don’t look at a model’s book ever because it’s fake! It’s the same as Instagram. When models ask me if I want to see a book, I just say: “No. I see you right now. And I don’t care really what runway you walked this season.”

WALTER PEARCE — I think that’s why in fashion, we have a responsibility to fight that. But also, I agree — I think we’re slowly moving in a good direction, diversity-wise. There’s, of course, so much work still to do, on the side of agents, casting directors, and, of course, brands.

OLIVIER ZAHM — I read that you studied photography and art. Is that right?

WALTER PEARCE — I started out doing photography. Most of my work was just portraits of boys with their shirt off, or girls in a t-shirt or something. It was basically casting-based.

WALTER PEARCE — I’m definitely more optimistic. I was never a fashion kid. I didn’t study fashion. But from what I know, just looking back now, the early 2000s were kind of the worst, casting-wise, show-wise, fashion-wise. New York was like — it really was nothing. And now, there are young designers. It alternates between the cities all the time, between which city is the hub of all the young designers. There was London for a while — it had all the young designers. Now, London doesn’t excite me as much. Paris, obviously. Paris for a long time didn’t have any young designers until Vetements and Balenciaga.