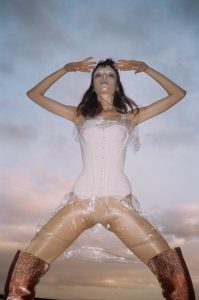 OLIVIER ZAHM — Did you want to be a model, or was it unexpected?

GRACE HARTZEL — I originally wanted to be an actress, but I got scouted for modeling, and it kinda took off from there. I’m mostly focused on music at the moment, and getting very excited to direct and perform in music videos and short films for my music.

OLIVIER ZAHM — ­­Can you describe your alter-personality, who incarnates your music and is featured in this issue of Purple?

GRACE HARTZEL — I have several alternate characters/words for my musical inspiration, but in this story I tried my best to portray Gadget. She was the first I ever imagined when creating my music. She’s my industrial, electronic punk side. Gadget is a cyborg created in Japan in the ’80s as a failed government artificial-intelligence soldier project. She far exceeded expectations and killed her creators, and escaped to Detroit. She enjoys never sleeping, dancing in dirty nightclubs, and making little robot minions. She wears costumes, corsets, plastics, cords, and ropes. Gadget has white eyebrows and magenta eyes. She doesn’t like talking to people, just machines and animals.

OLIVIER ZAHM — To me, you are the best model. Can you describe how you work in front of the camera? What inspires you — the way you move and your poses?

GRACE HARTZEL — Thank you, Olivier! I find my work with the camera to be very improvisational. It all depends on the style of the story, the photographer, the set design, and so on.
I love to talk with the stylists and photographers before the shoot, to go over the inspiration and mood. I like to create a good visualization of what the client is looking for so I can perform that specific way. One of my greatest pleasures in life is transforming and performing.

OLIVIER ZAHM — Do you like the way you are represented in fashion stories and magazines, or only in certain ones by certain photographers?

GRACE HARTZEL — It varies. I’m very picky and have only a few favorite fashion stories I’ve been in. As my time passes in the industry, I grow less and less patient for the bad, boring commercial shoots because most of the time they never incorporate the models creatively — we’re treated more like dolls on a conveyor belt than humans. Also it’s difficult when the stylist or photographer is bad, and you wish you could help, but you just have to shut your mouth and smile.

OLIVIER ZAHM — It’s often noted that you were scouted in a Cheesecake Factory, which reinforces some narrative of you as a down-to-earth Midwestern girl. Is there any part of this that you identified or still identify with?

GRACE HARTZEL — Yes, I grew up in the suburbs of Chicago and Wisconsin and then went to high school in Indiana, so I moved all over the Midwest. I definitely find myself connected to the Midwest, but I would never want to live there again. 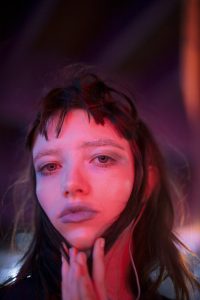 OLIVIER ZAHM — If you could wake up tomorrow with one new quality or ability, what would it be?

GRACE HARTZEL — Yes, there is a difference. I personally feel more creatively inspired and energized being around women. And I feel like there is a special connection that happens between females. Unexplainable magic happens.

OLIVIER ZAHM — How do you fight or oppose objectification when you are photographed?

GRACE HARTZEL — I just tell them off. Never be afraid to speak your mind, and be honest with how you feel about the situation! Never say sorry!

OLIVIER ZAHM — You seem to not be afraid to be nude in front of the camera, and to be very comfortable with your body. Do you think that men and women should not be afraid of nudity, and that there is an artistic potential in it?

GRACE HARTZEL — The body is a wonderland and is our very own physical instrument! How amazing! Every human being has one, so get over it! It’s just a body! For me, I don’t feel threatened by nudity because it’s our true raw form, and so beautiful. I love dancing and performing art naked. It’s a shame our culture rejects the idea of nudity. I would love to see a future world fully embracing nudity and not sexualizing or shaming women’s nipples. I’m sure I’ll end up living in a nudist colony.

OLIVIER ZAHM — How much of yourself are you willing to share with the world?

GRACE HARTZEL — I haven’t quite figured that out yet. I’m usually an open book, but I like to keep my personals on my personals, you know what I mean?

OLIVIER ZAHM — What’s your favorite movie and why?

OLIVIER ZAHM — Given the choice of anyone in the world, who would you want as a dinner guest?

GRACE HARTZEL — Ryuichi Sakamoto — one of the greatest composers and musicians of all time.

OLIVIER ZAHM — How does your generation, with vintage clothes and Instagram, see fashion today?

GRACE HARTZEL — We have so much more access to information/photos/videos, etc, than those in the past, making my generation’s style super-soaked in a mix of genres and decades. We’re unafraid of trying new hybrid styles.

OLIVIER ZAHM — I believe you are the face of your generation. Any idea why I think that?

GRACE HARTZEL — Wow, thank you! But to be honest, I’m not sure why you think that! I don’t know if I view myself the same way.

All clothes model’s own