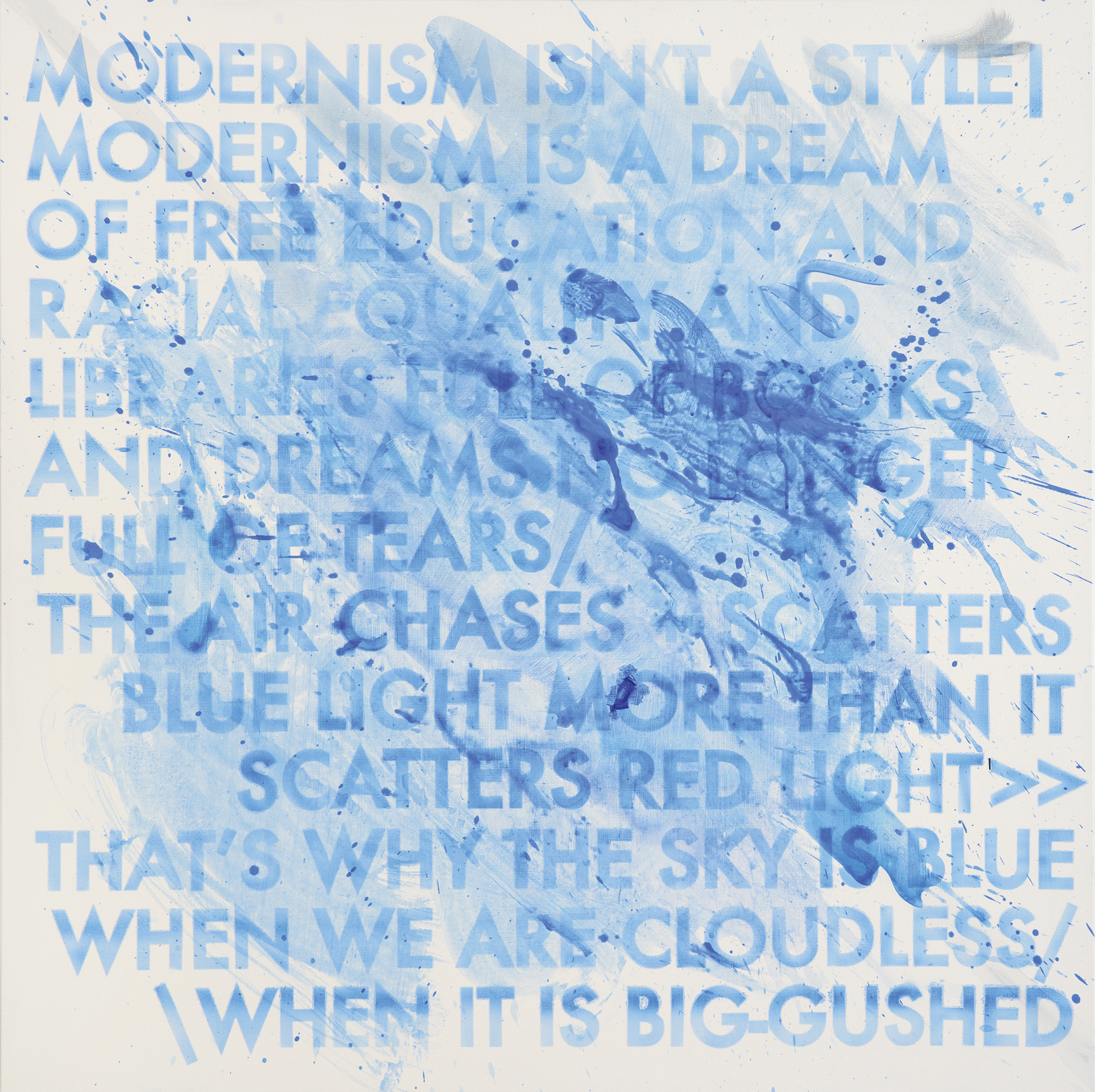 XERXES COOK — You’ve pasted your poetry atop advertising billboards in cities across Europe, subverting public space in a manner akin to that of the Situationists in the 1960s. If an advertiser’s agenda is to sell a product, what is yours?

ROBERT MONTGOMERY — It’s a kind of therapy against the materialism of the language, which dominates advertising as well as the news media — the two particular types of “dominant speech,” as Roland Barthes would say. They only deal with the material self, which is a very small area of our whole being. Not with the soul, which is infinitely more complex. Everyone has their own dream universe inside of them, and everyone is connected to ancient and future magic. [Laughs]

XERXES COOK — What is the role of poetry in the age of social media?

ROBERT MONTGOMERY — I’ve tried doing Twitter, but it’s too short for me — I can’t do anything with 140 characters. You can’t express complex ideas at all. It doesn’t allow for any nuanced thinking. What I’ve found, though, is that each of the mediums I work with dictates a certain length. I think of the billboards as essentially concrete poems, or graphic poems, and the answer to that question is that my billboards only work if they’re between 80 and 95 words. They have to work both as a statement and an image — they fall apart, visually, if they’re beyond 100 words. I have this very defined frame, which I have to write within. It’s a poetics of crushing meaning into as few words as possible. I learned a lot from poets like Sylvia Plath how to write with economy. I also learned a lot from artists like Jenny Holzer and from songwriters, too.

XERXES COOK — Alejandro Jodorowsky once told me he regards poetry as the purest form of expression as it is the least contaminated by commerce. Do you agree? 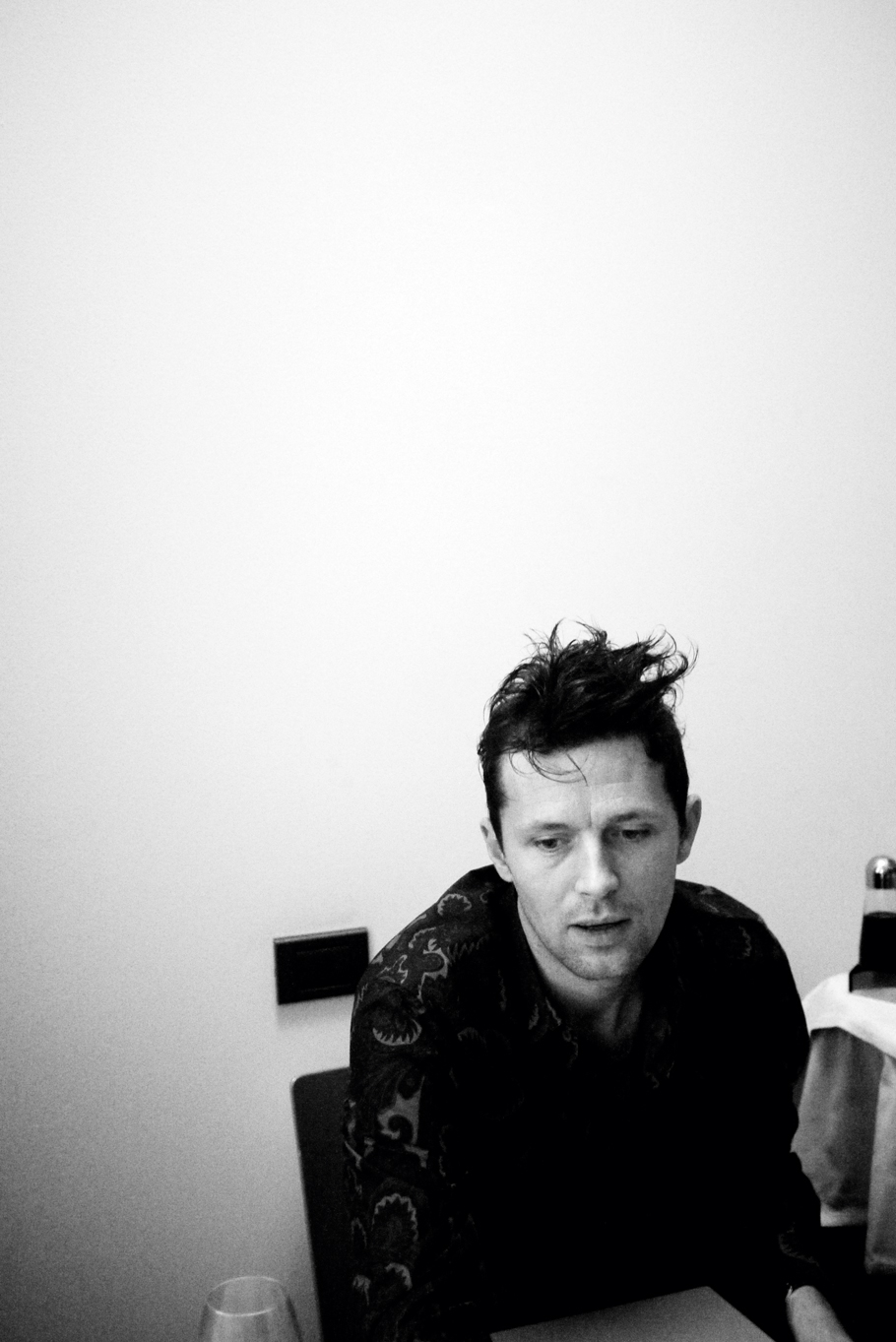 ROBERT MONTGOMERY — I started a small poetry press called the New River Press, which I’d like to work like an indie record label. When you publish poetry with a big publishing company, you tend to get about 8% of the cover price as royalties — we’re giving the poets half the money after the print costs. We’re trying to run it like a little collective and to publish young poets like Rosalind Jana and Greta Bellamacina.

XERXES COOK — You’d spent a good decade or so selling advertising space for style magazines before you became a full-time artist. Jeff Koons was a stockbroker. How did you juggle your day job with your struggle to become a poet?

ROBERT MONTGOMERY — Your day job can inform your work. Barbara Kruger worked as an art director for fashion magazines, and that informed her language. Working in publishing gave me a close-up view of the “spectacle” — the machinations of contemporary visual culture — and it gave me a lot of material to work with. My favorite story about this stuff is that in his early days, Philip Glass had two day jobs. One was running a plumbing company with his mate Richard Serra. The other was driving yellow cabs in New York. Even after the success of Einstein on the Beach, he was frightened to give up his day job, until one day he picked up this grand lady from JFK [airport], who said: “I was just noticing your name on your identity card. You have the same name as the greatest composer of this century in America. I saw this production by your namesake at Carnegie Hall called Einstein on the Beach, and I thought it was amazing.” And the story goes that it was only at that point he felt confident enough to stop driving the cab.

XERXES COOK — Your latest body of work, Hammersmith Poem and Love Letters to Kazimir Malevich, revises the history of modernism, casting it as a social project that culminated in free universities, health care, libraries. Why is this important to you now?

ROBERT MONTGOMERY — I want to re-inject modernism today, and reconnect to the original social project it was part of. When modernism really took root in Europe in the early 20th century, it wasn’t just a visual style — it connected with the ideological belief of improving societies through education, culture, and good social housing. 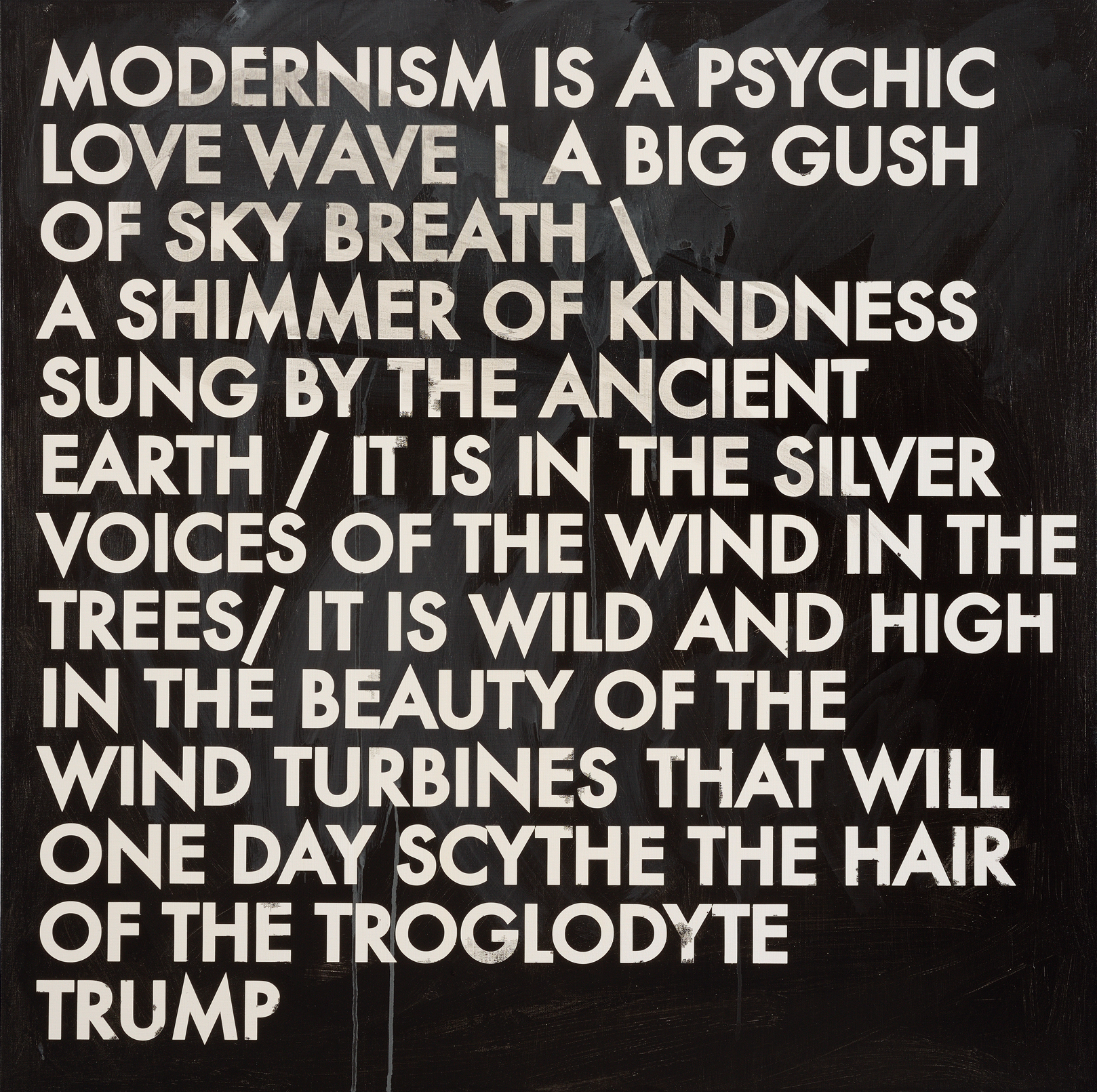 XERXES COOK — Why do you use the font Futura, which was used by the Third Reich?

ROBERT MONTGOMERY — It’s a powerful and beautiful type, which actually comes from the New Frankfurt group — a less-famous Bauhaus-type avant-garde run by architect Ernst May. This typeface was created by Paul Renner for their magazine, New Frankfurt, as an idealistic “vision for the future of type,” not for the Nazi propagandists, who used it later. Ernst May and his fellow architects, visual artists, and designers put their efforts into making the most beautiful social housing possible to address the city’s housing crisis in the ’20s.

XERXES COOK — Besides your font, do you refer to other modernist forms or elements?

ROBERT MONTGOMERY — Yes. For example, I painted texts on four black squares to echo the black square Malevich painted between 1915 and 1923.

XERXES COOK — So people might think you’re a dreamer — or politically very naïve? 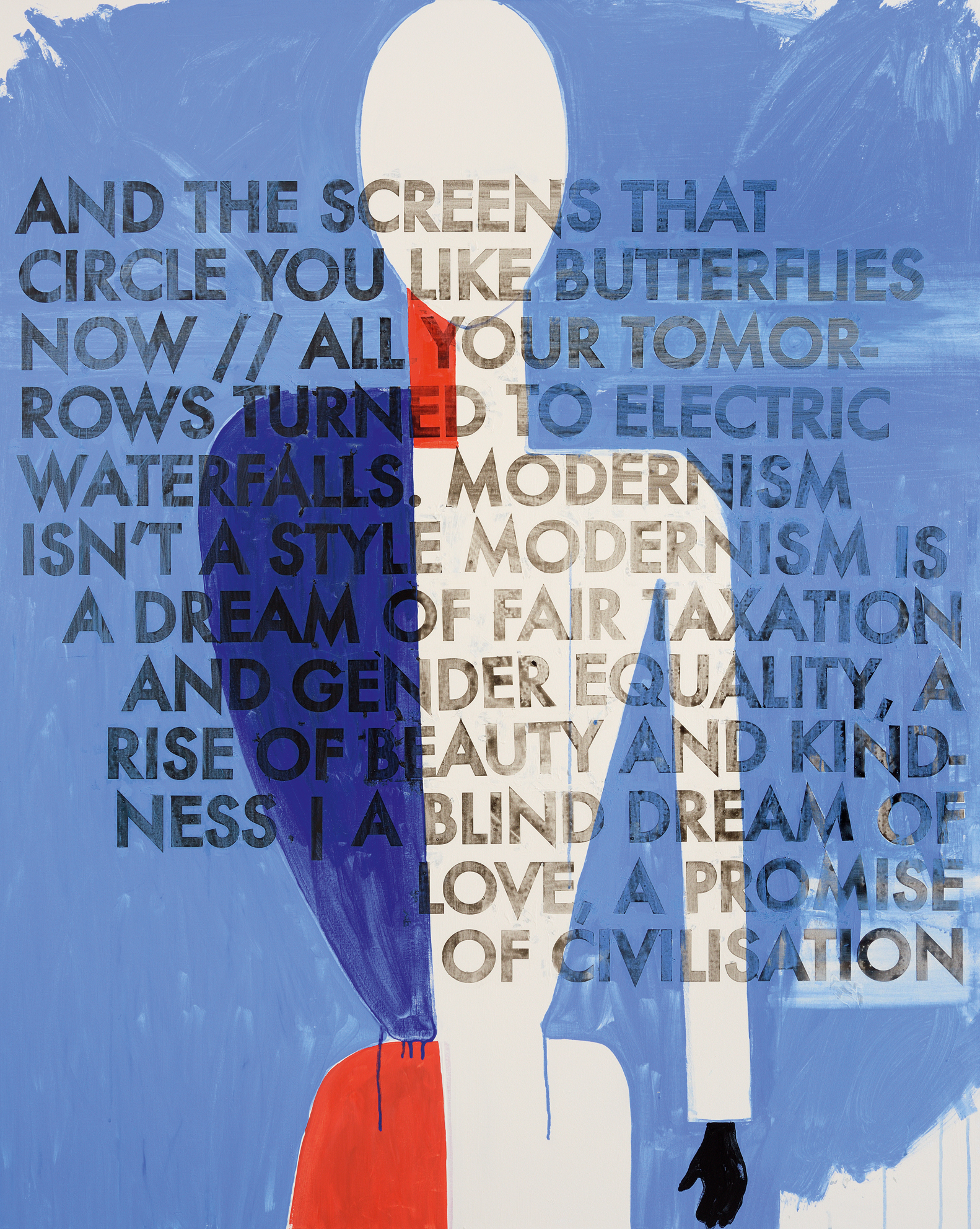 HAMMERSMITH POEM / MALEVICH PAINTING (AND THE SCREENS THAT CIRCLE YOU LIKE BUTTERFLIES NOW), 2017

ROBERT MONTGOMERY — So what? I think we need to renew modernism’s collective social project. We urgently need to reconnect with the idealism that modernism originally had and recover its ecstatic joy and peace for ourselves. We have to find beauty in a collective vision of the future in order to deal with the thousands of social problems we are facing.