i have already given up on hope again 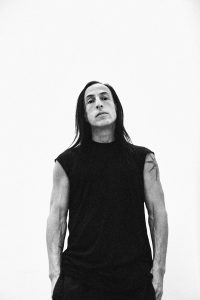 SVEN SCHUMANN — Rick, you described the presentation of your last spring/summer collection as “a show about hope.” Hope for what?

RICK OWENS — Shows are so autobiographical, and I’ve been concentrating on doom for so long. But culturally things seem to be declining, so I was thinking, “How do you handle that gracefully?” I might have driven that morose mood into the ground with my last couple of shows so I thought I’d give everybody a break and think in a more positive direction and concentrate on how the creative expression is itself a gesture of hope. It’s the opposite of death. The funny thing is, I have already given up on hope again, and now I’m just thinking of anger and aggression.

RICK OWENS — Because hope didn’t work out. When I’m looking at the cycles of everything that I’ve lived through, life is very crude. Aggression and conflict are just never going to go away, no matter how idealistic people can be and how much they hope. There are certain things that we just have to deal with. Part of it is: life isn’t fair. So when I do a show that’s more angry, I feel like it’s almost a positive release, and I’m inviting people to be part of this release that will blow over, and then we’ll go on with the rest of our day, trying to be sophisticated people. The problem is, some people don’t learn how to contain anger and aggression or control it, and it erupts in unpleasant ways.

SVEN SCHUMANN — When did you learn how to contain it?

RICK OWENS — I don’t know if I ever did! I still am surprised that it’s part of my life. I catch myself rolling my eyes at something or kind of having a sneering attitude, and I just can’t believe that I still have that in me. I feel like I’m more developed and evolved than that, but I still have moments of pettiness… It horrifies me! I realized that there are personality traits that are just out of our control. That self-acceptance of giving yourself a break for not being perfect but still working on it is important. So I try and think about being truthful and things being logical. And I think that’s my version of relevance.

SVEN SCHUMANN — Do you still consciously think about how to stay relevant with your work?

RICK OWENS — I don’t know if I’m in the conversation of immediate popular culture because I’m not that familiar, I’m not that engaged with it. But what I am engaged with are kind of eternal values that I think everybody struggles with internally. I’m aware of staying relevant. I’m aware that I put stuff out there, and I want it to say something positive and something logical. I use the word “logic” as my word for relevance.

SVEN SCHUMANN — Does that form of logic also apply to the way you think about the fashion industry at large?

RICK OWENS — I don’t really think about the industry at all. Ever! In a way, I’m not really part of it. I am on the fringes, I think. There’s been a turning point — now I feel like an elder statesman, whereas before I was kind of a wild card or something. I think partly that has to do with so many transitions being thrown around in the industry. Now it’s all about people being chewed up and spat out and not even recycled — replaced with newer and better… It’s this furious, furious blender. Like one of those kitchen mixers. I feel like someone like me. I end up turning into something else now because I’m not part of that world. And I’m not sure what it is yet, and I’m not sure if it’s good or if it’s bad.

SVEN SCHUMANN — Do you still feel a certain responsibility toward your customers?

RICK OWENS — Oh, absolutely! Although I’m sure many would roll their eyes at that, having seen my last shows. Years ago, I swore I would never show something on the runway that I didn’t think was a practical way of dressing. But things change. Showing good-looking clothes isn’t enough anymore. With so much oversaturation of imagery of good-looking clothes, I think you have to go further. I’ve started getting probably more abstract than a lot of the people who were originally interested in me, and I’m sure they were appalled. But you can’t stay the same forever, even though my values are still the same. The world has changed a little bit, and in order to be able to get your point across, maybe you have to be a little bit more compelling. This isn’t really completely about clothes — this is more about an ethos. This is more about a set of values that I stand for, and this is about experimentation, and this is about risk-taking, and this is about searching for more.

SVEN SCHUMANN — So, what kind of impact are you trying to have on society with the clothes you are designing?

RICK OWENS — I always wanted to have kind of a quiet flamboyance, and I wanted to have romanticism, and I wanted to challenge aesthetics that I felt were too narrow and too conservative and too rigid and too judgmental. I wanted to broaden those parameters a bit or blur them or fuck with them. I wanted to challenge good taste, perceptions of good taste, but in a kind way, in a gentle way. I wanted there to be a gentle humor in pushing boundaries. Maybe that’s a good way of rounding that off. And when you’re blurring the edges of conventionalist setting, I think that bleeds into blurring the edges of intolerance and bigotry. And that’s what I always wanted to do.

SVEN SCHUMANN — How would you describe the state of fashion today?

RICK OWENS — Clothes used to be so much about communication, but there’s so much communication now! Clothes might have become a little bit irrelevant. Maybe that’s why clothes are becoming kind of more markers of irony. Clothes now are not so much about beauty — maybe they’re more about displaying knowledge and displaying wit and displaying shrewdness. I think there is a shrewdness that is exciting. I love it. I never, ever disapprove of evolution because that’s silly. I do think there’s kind of a hardness now, kind of a calculating crudeness that I think is really cool — I think it’s really sophisticated and kind of elegant.

SVEN SCHUMANN — Does fashion, in your opinion, have a certain responsibility?