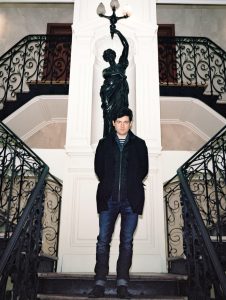 JOHN JEFFERSON SELVE — What stirs your interest when you undertake a documentary?

CLÉMENT COGITORE — What interests me is the common denominator between men. The question is to find out to what extent my fellow man is a stranger to me. And vice versa. How do we come to terms with the other? These questions have a certain universality about them. Things weren’t too complicated with Braguino, my film about a family living in autarchy in the depths of Siberia.

CLÉMENT COGITORE — I don’t worry about categories or disciplines anymore — except when it comes to funding, which requires you to put a name to things. In the early days of my work, I was full of certainties, and then, in the spirit of Le Fresnoy or of artists like Pierre Huyghe, I abandoned the unicity of the medium. But there’s nothing new in that. Look at the Quattrocento. The workshops back then were filled with models, drawings, sculptures, and even poems. Such was the case with Michelangelo, for example.

JOHN JEFFERSON SELVE — You care about beauty in art?

CLÉMENT COGITORE — For my part, I’m not scared of lyricism, as long as it addresses the essential question: What story do we lack? Why do we need it so badly?

JOHN JEFFERSON SELVE — Why is Braguino such a dark film?

CLÉMENT COGITORE — That film is clearly a tragedy, the story of a small world doomed quickly to vanish. There’s a certain cruelty to the film because we record a beautiful thing that’s already been condemned to death. We made the trip back from the shoot in Siberia by helicopter, flying a thousand kilometers, and throughout the trip the forest below us was burning. We were enveloped in smoke. It was apocalyptic. There are huge numbers of forest fires in that vast region because of global warming and because of fires that people set on purpose in order to grab up land. The trinity — consume, produce, possess — is the root cause of this. This is no mere ecological observation. It’s metaphysical. I’m raising my daughter in a world where NASA is explaining to us step by step the end of civilization. But we can’t accuse them of catastrophism.

JOHN JEFFERSON SELVE — In Elégies, you film the formal ritual of a concert crowd, who themselves film what they see with their cell phones. The effect is powerful. Something religious suddenly unfolds.

CLÉMENT COGITORE — I find it interesting to see how religion, just when we think we’re done with it, reemerges as a specter or a ghost — a sort of vision of time immemorial.

JOHN JEFFERSON SELVE — What’s the difference between fiction and reality?

CLÉMENT COGITORE — At its root, fiction is about filling a void. What does reality lack that we feel the need to construct fictional tales? The constellations are perhaps the most beautiful example. They’re the first fictional gesture. We brought order to the chaos of the stars and sky.

JOHN JEFFERSON SELVE — Do you feel pressure as a result of your success?

CLÉMENT COGITORE — People often treat artists as racehorses. It’s a modern-day economic reality. Cinema is brutal in this regard, worse than contemporary art. You can’t make a single mistake because the medium is so expensive. But I don’t want to enter into a “market.” I want the option to fail, so that I can invent.