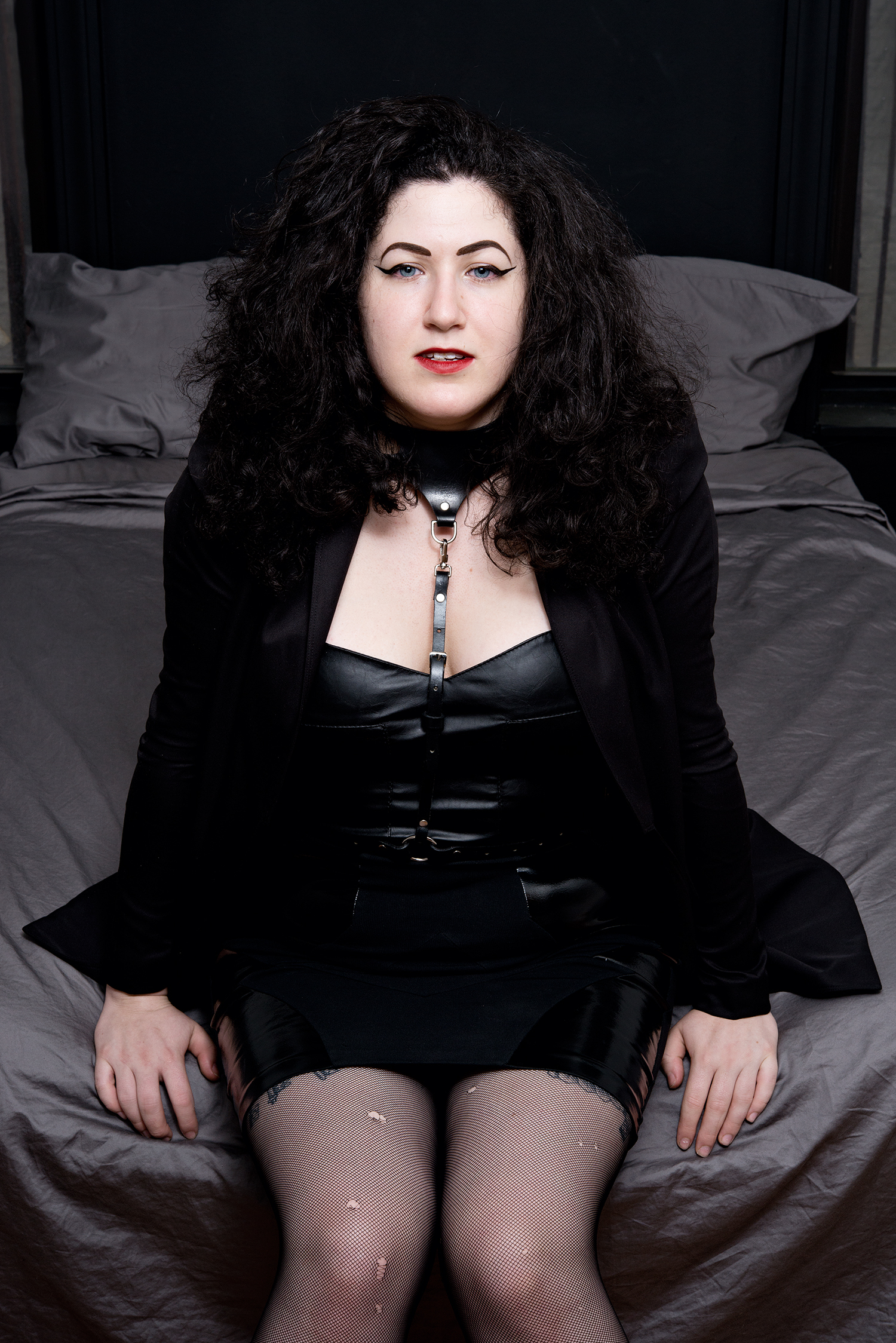 ANGELA GAIMARI — How did you come to design harnesses?
ZANA BAYNE — I’ve always loved bondage-type pieces juxtaposed with casual clothing. It’s a really powerful look and an easy way to bring the connotations of S&M or something a bit darker into everyday dress. I was working in fashion and making designs for myself, and through my blog it really caught on and I realized it was something I could make money doing. It turned into my whole life, really.

ANGELA GAIMARI — A harness is just a belt with some straps, but it conveys a message greater than the sum of its parts.
ZANA BAYNE — That’s the phrase I use to get people into the idea. A lot of people will see black leather and silver rivets and say, “Oh my god. Sex shop. I can’t do this.” What I have to do is change the way people think about the accessory and have it be wearable for them.

ANGELA GAIMARI — Is the goal to make it accessible to the point where it’s no longer a sex object?
ZANA BAYNE — The difference is movement. Bondage is about constraint and keeping body parts together. I want my pieces to be worn so you can move freely in them.

ANGELA GAIMARI — Do harnesses empower women?
ZANA BAYNE — That’s what I really hope. Wearing a harness is a completely different sensation than wearing a normal piece of clothing. It’s a posture thing. I’ve had a lot of people tell me that they feel that much more powerful just because of the stance that it gives them. And also having something rigid like leather against your body is almost like personal armor.

ANGELA GAIMARI — In fetish communities, clothes serve as signals. Do your designs convey a language?
ZANA BAYNE — It’s something that gives off a bit of that hint. A conversation starts. Maybe there’s a bit more going on than meets the eye. I’ve seen people wear a cream harness over a gold dress to a wedding and I love that. It’s jewelry and it’s decoration and it’s intrigue all in one.

ANGELA GAIMARI — What feedback have you gotten from people you’ve dressed who may have been nervous to express themselves this way?
ZANA BAYNE — There are so many different styles: some are easier to wear, and some are more complex, with chokers and straps. But I find that when I’m able to match a harness with a personality, people just get it instantly.

ANGELA GAIMARI — What’s the range of your client base?
ZANA BAYNE — I’ve had a kid who bought a harness to wear to prom. I’ve had a woman in her fifties, a mother of three who wears all Comme des Garçons and works in a hospital during the daytime. I’ve had 22-inch waists and I’ve had 56-inch waists. I’ve had guys who bought full-body customized harnesses to go to a leather convention. I always like to check my customers out online, and these guys were just real-estate agents by the day.

ANGELA GAIMARI — Who are your sex symbols?
ZANA BAYNE — There’s always the Wendy O. Williams and Siouxsie Sioux characters. There’s a very different sexual energy with Grace Jones — she’s amazing. All of my buddies in New York. I love dressing Ladyfag because she’s just an incredible entity. And I look at Thierry Mugler a lot. I love the pieces that are so borderline you don’t know if it’s fashion anymore or if it’s bondage.

ANGELA GAIMARI — Mugler’s curvy supermodels possessed an imposing sexual power. Are we heading back into an era of a fiercer female sexuality?
ZANA BAYNE — Totally. There are literally ferocious pieces that are actually dangerous, and I love that about this work. I think a lot about the influence of Lady Gaga and Rihanna. A lot of girls now are wearing clothes that have trickled down to the mainstream, and they might not even realize how extreme they are.

ANGELA GAIMARI — Once a fetish becomes mainstream, though — to the point where you don’t even notice it — does it lose its vitality?
ZANA BAYNE — I don’t think so at all. There are so many different kinds and shapes of harnesses that if you really want to keep the hardcore for yourself, I’m sure you can wear something that’s really not going to work in a classroom. And if it gets to the point where that’s acceptable, then fuck yeah! That’s amazing! The real freaks are always going to be wearing leather underwear anyway. That’s harder to market.

ANGELA GAIMARI — How do your customers find you? Have you done leather conventions?
ZANA BAYNE — I did a couple of pieces for The Black Party. I’m asked to do that every year, but I’m really uncomfortable in the booth setting. It’s a lot of word of mouth, and it also depends what imagery people stumble on. Depending on what picture you find, you can really see my work in a completely different way. The last video I did for my collection with Char Alfonzo is really sort of minimal fetish, just touching on the dom/sub relationship but in a more accessible, easy-to-digest way.

ANGELA GAIMARI — What separates your designs from the kind of fetishwear you’d find on, say, Christopher Street?
ZANA BAYNE — The type of leather that I use is lighter-weight, which goes back to my whole comfort thing — feeling like you’re held in but not necessarily weighed down. And I use different silver finishings. Also I try to use the shapes of traditional fetishwear and then take that in another direction. For example, there’s a classic men’s X-harness with a big ring in the middle and straps that come over the shoulders and go around the waist. It’s such a great silhouette that I always try to reinterpret it in different ways. It’s more of a point of inspiration than anything else. And then if you put anything in white or tan, it’s totally different. I’ve been really into this honey brown color — it’s so classic, so Hermès, so equestrian. It transforms the piece. You take something and do it in black, brown, and clear and you have three completely different feelings.

ANGELA GAIMARI — Looking at the success of brands like Myla and Kiki de Montparnasse, it seems there are a lot of people who want fashion - sanctioned luxury sex gear.
ZANA BAYNE — They want something that doesn’t look so obvious. And with Instagram and Tumblr people are able to be voyeurs and exhibitionists at the same time. Bondage works even more now than ever before. People have these very public secret lives.