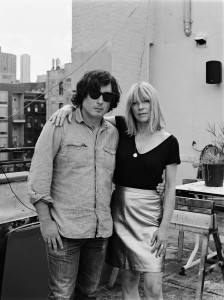 An artist friend of mine from Berkeley, who used to be married to an astronomer, recently moved around the corner from me in Chinatown. Her apartment is on the top floor with a balcony overlooking the Five Points. During her renovation, I saw pastels being stripped/born in the kitchen, pinks and light-blue hues awakening like one would see in a Hopper or Hockney painting. The lights she strung around her bedroom were reminiscent of Ed Ruscha’s Hollywood sign, and she used a metallic curtain from the party store’s blinds. Whenever I visit Lutz Bacher, who dresses like the Unabomber, btw, I am reminded of Kim, a California native, so warm and light-hued, thoughtful and generous as the colors of the sky. I love that she loves dogs. Kim always has a dog or several, which is always a “punk” move in NYC, as far as I’m concerned. Maybe it’s how a canine’s mood can be simple — a dog’s mood changes easily, kind of like music, which can also attack one’s emotions like a shark.

Recently, when Kim plays, her voice whispers flutteringly, like a butterfly circles the air or a paper plane glides toward the head of someone you are aiming to hit. This is exactly what happens as Bill Nace leans back to watch Kim rise again, and one feels like they been hit by a tundra. The marathon begins, a co-ed army of admirers gear up for war, even just to see a twinkle of a single sequin on her shorts. The way her hair carries that voice, her guitar is wailing at you, like a man that just got out of prison after doin’ 20 years. The result is warfare, the yin/yang of sound, the balance of the delicate species of a woman made up of both sides, male and female — the most eloquent yet fiercest musical poetry, which has been missing for quite some time now.