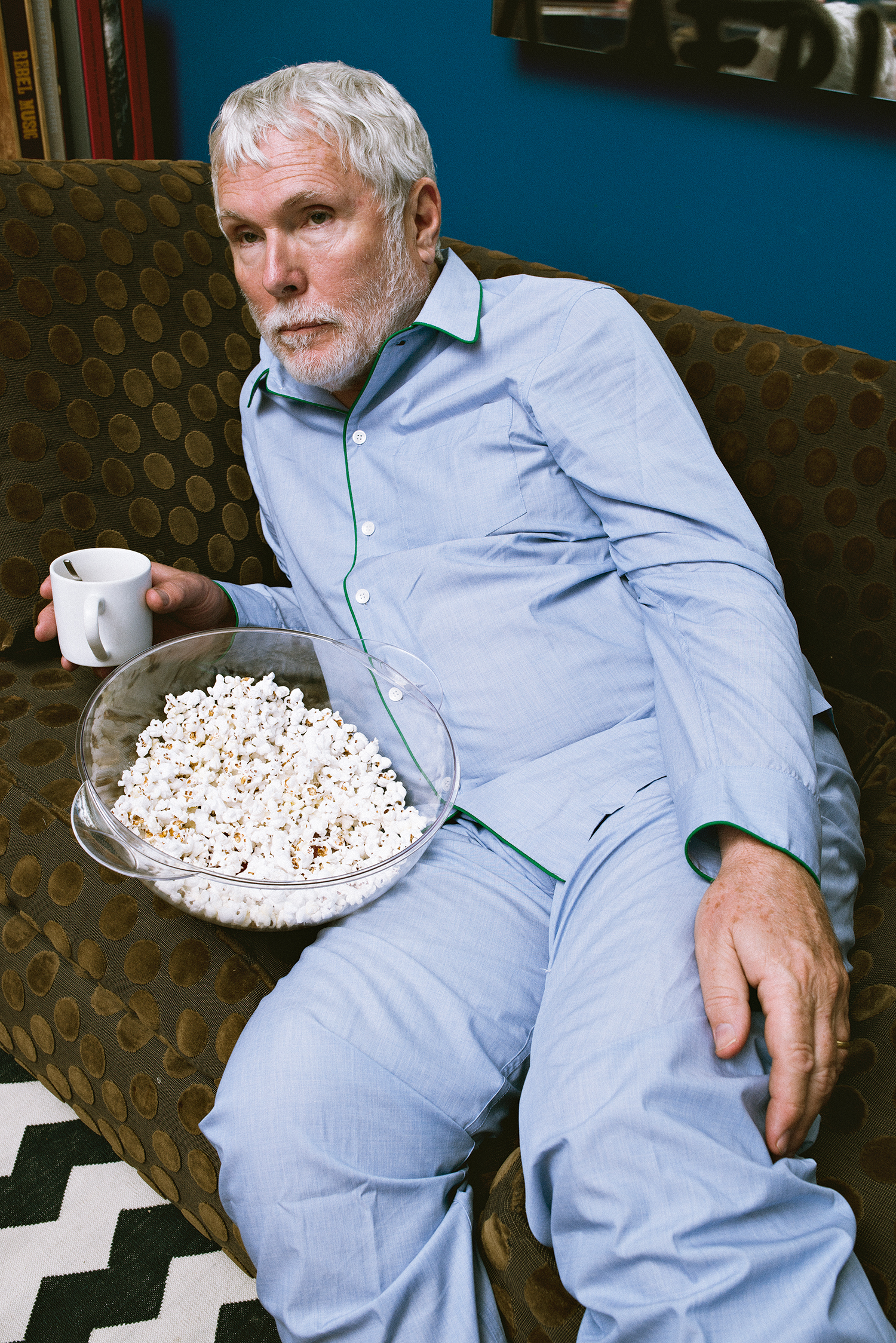 I met Andy Spade when he was a creative director at ChiatDay advertising. One day I was called in to freelance and there was Andy Spade, an apparent preppie who soon revealed a uniquely brilliant and subversive mind. Soon Andy and his wife Kate started Kate Spade and became handbag moguls, while remaining exactly the same: brilliant but down-to-earth party-people renegades. When Andy Warhol talked about Business Art he was imagining Andy Spade.

When they sold Kate Spade, Andy could have done anything, but he still had the agency bug and he founded Partners and Spade: a marketing firm by day, a boutique/gallery on weekends. One day Andy said: “I hate clients. I want to have my own product.” So he did it, inventing a brand new brand, Sleepy Jones — a pajama and intimate wear line that is, like him, of superb quality, but upon closer inspection deceptively clever.

GLENN O’BRIEN — Tell me your history with pajamas.
ANDY SPADE — I wore pajamas when I was probably, you know, two, but they were onesies — with feet. And then I graduated to Green Bay Packer pajamas when I was about three or four. My younger brother, David, was a Miami Dolphins fan. I was a Packer fan. Everything we got for Christmas was about our teams. I had Packers sheets, Packers curtains, and Packer pajamas. I always thought pajamas were just great-looking things. To wear them around is great. I’ve seen you on the street, shuffling on a cell phone in pajamas and a robe, so I thought these can actually be worn outside.

GLENN O’BRIEN — I usually go outside in my pajamas if I’m walking the dog or getting the newspaper. But I often work in them until lunch.
ANDY SPADE — If you can do it, why can’t the rest of the world?

GLENN O’BRIEN — Sure. A friend was telling me that it’s his habit to wear pajamas down to breakfast in hotels and that recently somewhere in the Mediterranean he was bounced from breakfast because of it.
ANDY SPADE — At the Bowery Hotel I see people having coffee in pajamas. Kate takes meetings in her pajamas at the apartment. She doesn’t want to change, and she doesn’t have to. Right? She’s retired. Our target customer base is retirees.

GLENN O’BRIEN — I need to relax to work.
ANDY SPADE — A lot of people work in their most comfortable clothing… We talked about Picasso, David Hockney, and Jean-Michel, wearing pajama tops in the studio. The style is really great, and no one has really done it other than artists and creatives…

GLENN O’BRIEN — Was Hef an influence?
ANDY SPADE — Hef was one of many. We’re working on a really great silk robe that may come with a pipe and an old Playboy as a gift… The idea started with looking at old pictures — looking at old pictures of people in great pajamas. Hockney in a pajama top with a knit tie and an old pair of splattered khaki pants and Moroccan slippers…

GLENN O’BRIEN — There is more than one generation that mostly sleeps naked or in underwear. I find it uncivilized.
ANDY SPADE — I don’t like the naked thing. It’s good to have your body protected in bed.

GLENN O’BRIEN — I sleep better. I’m warm and cozy. I am dressed for a quick trip to the bathroom. God forbid, if anything unexpected should happen in the middle of the night, you’re ready…
ANDY SPADE — Kate’s sister had a fire at their house. She had nothing on, her mom was in her nightgown braless, and all the kids were embarrassed. For that alone, people should buy pajamas.

GLENN O’BRIEN — Where did the name Sleepy Jones come from?
ANDY SPADE — Originally the name was Great Jones, from Great Jones Street. But Great Jones Café owned it and we couldn’t get the name, even for this category. I have a problem changing course, because of ADD, so “Sleepy Jones” makes me focus on the idea of sleepwear — everything that lives in that world. The sleeping, dreaming world. Sleep masks. Notepads for your bedside table.

GLENN O’BRIEN — Wasn’t there a movie character named “Sleepy Jones”?
ANDY SPADE — There actually was a character named Sleepy Jones in a 1910 movie. There’ve been several notable Sleepys — musicians, athletes, a cartoon dwarf. But I think the idea is aspirational and luxurious. Underwear and athletic companies talk about working out, getting in shape, and having the best body, but no one has been counterintuitive and said, “Lay around! Sit back and just read or doodle.” We say, “Ponder in your underwear! Meditate! Contemplate!” The paradigm built by Calvin Klein showed only models in great shape. A lot of people don’t relate to that. So I like the idea of regular people living in these clothes and not feeling embarrassed. In fact, feeling very comfortable.

GLENN O’BRIEN — I need pockets in pajamas, the breast pocket of course for glasses. I love pajamas with pants pockets.
ANDY SPADE — We’ve added pants pockets this fall. That will be what we can call the “street pajama.” Remember, Mark Gonzalez in Purple, skating around town in pajamas? That was great. We also took the collar and based it on a traditional men’s dress shirt collar and then piped it. I didn’t pipe the pocket, so that it would feel more shirt-like. There will be pockets in the back of the little shorts we make for girls.

GLENN O’BRIEN — I keep my sleep mask in my breast pocket and silicone earplugs.
ANDY SPADE — We should make silicone earbuds because those iPhone earplugs never stay in. Isn’t that a good idea?

GLENN O’BRIEN — Yeah noise-cancelling elec­tronic earplugs!
ANDY SPADE — It’s time for people to come out on the street in their pajamas. I don’t know why. It just feels right. It’s in the air. My daughter was the inspiration. She walks to the store in pajamas. She’s eight and if she can do it, anybody can do it.

GLENN O’BRIEN — Even in the summer, I wear long pajamas. I love seersucker which is hard to find.
ANDY SPADE — We’re making them! There are a lot of possibilities… We just did Hawaiian print pajamas. We have some great Indian fabrics we’re putting into the line. We’re doing silk, kind of tuxedo pajamas with a little satin side stripe in black and in white for New Year’s Eve.

GLENN O’BRIEN — The perfect night for a pajama party.
ANDY SPADE — One thing that we’re doing is we’ve actually embroidered on the base of the shirt, “No fucking starch, please,” in Chinese letters. Slim Aarons [the great photographer] put that on all of the shirts he’d send to his Chinese laundry. We’re also offering monogramming for the boxer shorts and for the pajamas. I don’t want to reinvent the pajama, really. I just want to change it a little bit, perfect it.

GLENN O’BRIEN — Well, there’s a need, I think. Sleep is an event. It should be dressed for.
ANDY SPADE — We’ve gone the extra mile. The shirt on our pajamas has buttons that are actually designed for a man’s shirt. They’re subtle, so you can wear it outside and not feel like you’re making a spectacle. There’s a cigarette pack pocket for smoking in bed. So it has everything…

GLENN O’BRIEN — How do you sleep?
ANDY SPADE — How do I sleep? Well, that reminds me of the charitable part of Sleepy Jones, 10 percent of the profits go to narcolepsy.

GLENN O’BRIEN — Fantastic.
ANDY SPADE — But I sleep okay. I get up twice in the night to take a pee and then sleep well. I’ve been dreaming a lot lately, because I haven’t been going out too much. I just had the strangest dream about… Well, I’m not going to say, because it sounds really weird.

GLENN O’BRIEN — Pajamas help dreaming. Beautiful, comfortable pajamas, a fantastic bed and linens, a nightcap perhaps, someone to tuck you in…
ANDY SPADE — Like a dream come true…