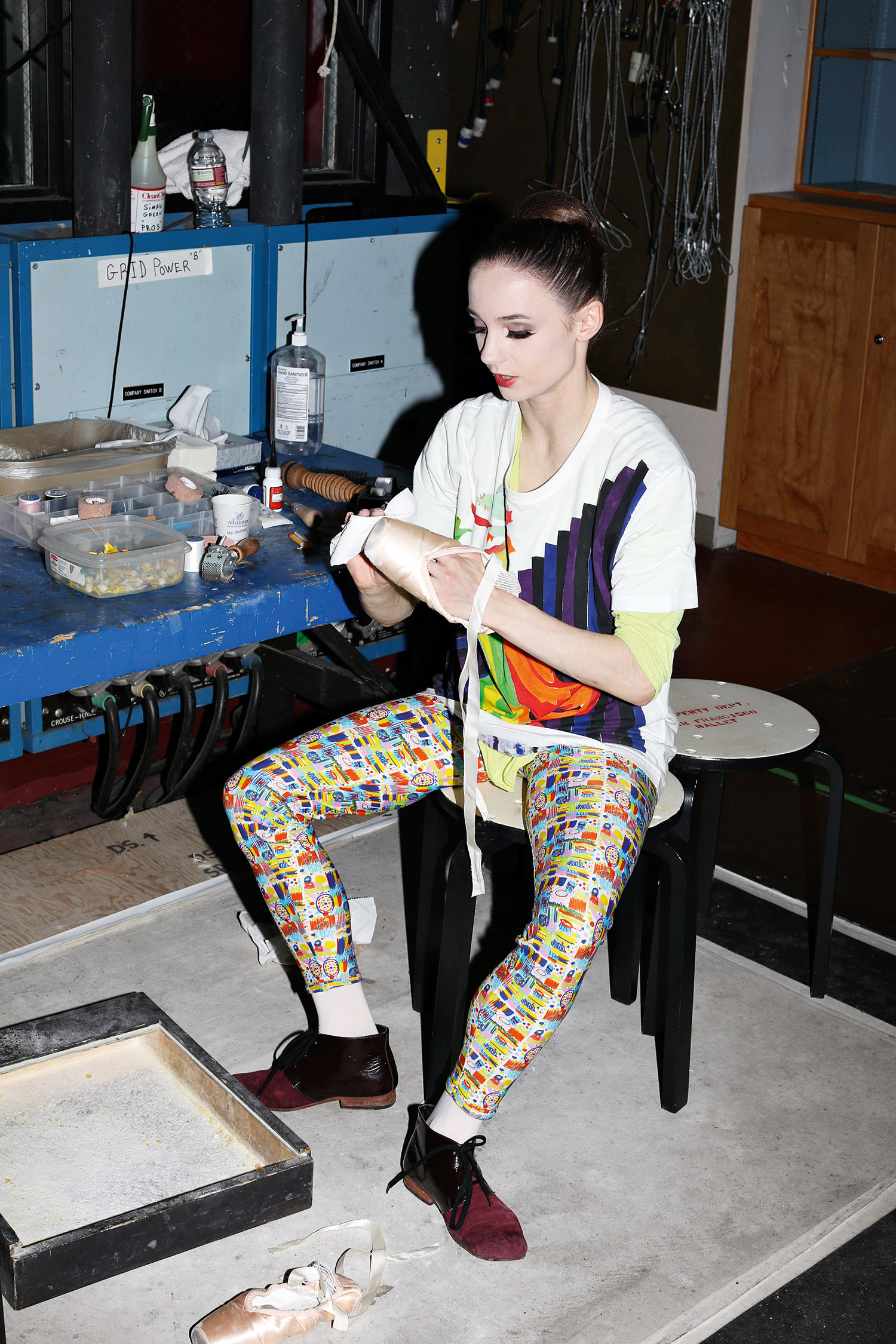 
interview and photography by ANNABEL MEHRAN

ANNABEL MEHRAN — How did you start dancing?
MARIA KOCHETKOVA — I was doing figure skating and rhythmic gymnastics, and it was my parents’ idea for me to go to ballet school. I didn’t like it at first. I saw myself as a professional athlete, and ballet felt very girly.

ANNABEL MEHRAN — Was it harder than you thought?
MARIA KOCHETKOVA — Yes. From the moment I got into the Bolshoi, which was almost impossible, it was work from the first day. We were never treated as kids. It was the hardest eight years I’ve had so far. I remember thinking: Why are they being this horrible to me? I’m just 13 years old.

ANNABEL MEHRAN — Were there other subjects to study in addition to ballet?
MARIA KOCHETKOVA — We also had the normal lessons like math and literature and history. Education was as important as studying ballet. That’s maybe why Russian ballet is different, because of the emphasis on the history of arts and culture and literature. We were basically at school from nine to six, and then we had rehearsals even later, so I was there all day.

ANNABEL MEHRAN — But you slept at home.
MARIA KOCHETKOVA — For two hours a night.

ANNABEL MEHRAN — Was the atmosphere the same as when Baryshnikov was there?
MARIA KOCHETKOVA — I think it was more political. You never know what happens outside of the studio. It was extremely competitive. When you stand out, other students and parents try to ruin you. They try to close all the doors so nobody sees you anymore. My parents are engineers. In a school like that, its really tough having no connections.

ANNABEL MEHRAN — Did you understand what was going on at the time, or did you think it was merely personal?
MARIA KOCHETKOVA — I was confused all the time. The thing was that I didn’t have a perfect physique. My neck was too short and so I was often told I’d never be able to dance. Now I know that none of the most famous dancers are perfect.

ANNABEL MEHRAN — What is considered a “perfect” ballerina physique?
MARIA KOCHETKOVA — Actually, I don’t know. My problem is that I’m really short, like five feet tall. And at the Bolshoi they told me I would never go past doing cygnets or ingénue parts because of that. But it’s all about finding someone who believes in you, which is why I left Russia.

ANNABEL MEHRAN — Where did you go first?
MARIA KOCHETKOVA — London. Since I left Russia, my height has never been mentioned as a bad thing. But it wasn’t until I came to America that I learned how to do more.

ANNABEL MEHRAN — When you got to the city, did you know that the San Francisco Ballet would be a good fit?
MARIA KOCHETKOVA — I could feel it when I saw them dance in London. All the dancers were different, and they moved so well. They weren’t perfect, but I was mesmerized.

ANNABEL MEHRAN — How long did it take you to become a principal in San Francisco?
MARIA KOCHETKOVA — It took a long time because the way I looked confused people until they actually saw me dance. After I won most of the highest boards and competitions, I spent five years standing on one leg until I came to audition here. I felt like I wasted a lot of time when I started out. I remember thinking that I would try until I was 23 or 25, and if I didn’t make principal, I was going to quit because it was too hard. 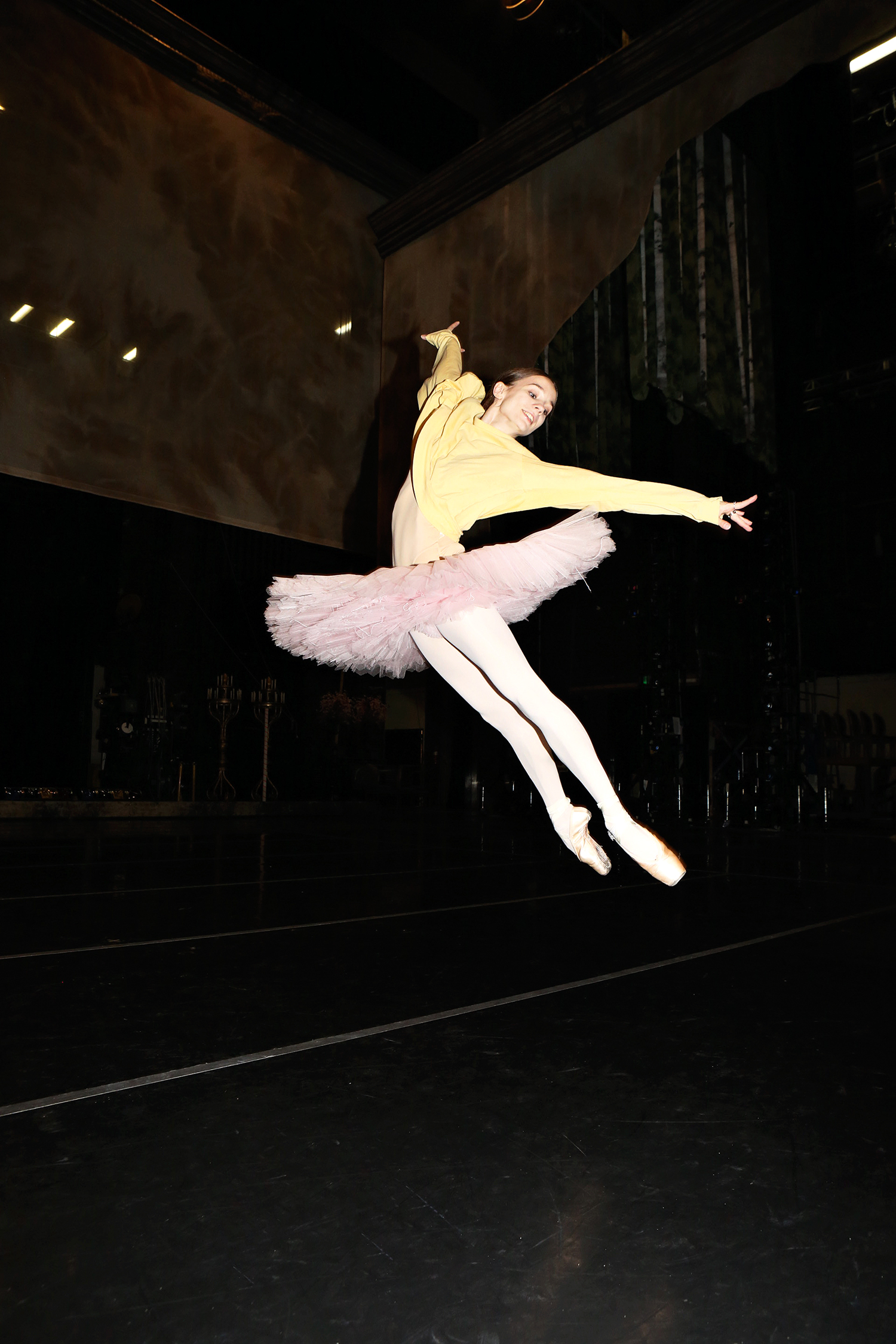 ANNABEL MEHRAN — You thought about giving up?
MARIA KOCHETKOVA — Yes. But in a way being stuck for so long makes me appreciate everything I have now. Most of the people I dance with got things so easily that they don’t understand what they have and how hard it is to get where they are. But I realize how little time I have to do what I want to do, and that’s the reason I work so much. I know it’s going to be over, and I don’t want to have any regrets when I stop dancing.

ANNABEL MEHRAN — Watching you in rehearsal, you appeared more determined and harder on yourself than any of the other dancers.
MARIA KOCHETKOVA — I work 200 percent in the studio. I get nervous, so I try to perfect the technical aspect. Then when I’m onstage, I don’t have to worry about anything. I can let go and just dance, as if I were dancing for myself. And the audience can look through the dancing and see the story.

ANNABEL MEHRAN — Is the sexuality of ballet something that is taught, or something that evolves in you as a dancer?
MARIA KOCHETKOVA — I think it is a habit. You can’t teach something like that. You can teach someone how to do a pirouette or a jump, but you dance with what’s inside, and that depends on how smart you are, the environment you grew up in, and what you educate and fill yourself with. If you don’t have it, you don’t have it.

ANNABEL MEHRAN — Do you find that the response of the audience and the knowledge of ballet they bring to a performance feeds you or that it’s not high enough?
MARIA KOCHETKOVA — Let’s just put it this way: if I dance at the Bolshoi, I’m more nervous because I know that everything will be seen. And of course that pushes me. But I dance for everybody. If I go somewhere where they’ve never seen ballet, and it makes them happy and they go crazy, and if it changes one person’s mind, then that’s important. That’s what I’m doing it for. It’s true that you have to be prepared to see ballet. Sometimes it can be complicated and not musical. But I believe that if there’s something truly good going on, you might not know what it is, but you’ll feel it.

ANNABEL MEHRAN — Your husband, Edward King, is not in the world of ballet.
MARIA KOCHETKOVA — Thank God. When we met he was in film, and now he works in tech in San Francisco.

ANNABEL MEHRAN — You’re very active on social media, for example on Instagram.
MARIA KOCHETKOVA — Living in San Francisco, it seems a natural thing to do. And I enjoy it, because I feel it’s important for the ballet world to open up so people know what it is. Some people have really strange ideas about ballet. They think it’s something that was 100 years ago, which isn’t the truth.

ANNABEL MEHRAN — Would it be better if ballet were less private in general?
MARIA KOCHETKOVA — It would be nice if it were exposed more and filmed, but there are so many rules and unions and it’s so expensive, it makes it hard for it to be more popular. But I think social media is starting to change that.

ANNABEL MEHRAN — Does the repetitiveness of ballet ever get boring, or does it just get challenging in a different way?
MARIA KOCHETKOVA — Nothing ever gets boring for me when there’s a part I like to dance. I always discover something new. Even The Nutcracker, which most other dancers hate — I have to admit, I actually like it. It’s not like when I heard it for the first time, but it’s still a great ballet.

ANNABEL MEHRAN — With dancers, it’s different than being an actress or a pop star, where everything is done for you. Do you do your own makeup and sew your shoes?
MARIA KOCHETKOVA — I feel the safest when I do things myself. I do my makeup and I do my hair, even if it takes me way longer than if someone else would do it. For the shoes, of course every dancer does her shoes.

ANNABEL MEHRAN — You scrape them and sew them?
MARIA KOCHETKOVA — You break them in and cut them. You use all these sharp objects to ruin them when they’re new. Then you attach the ribbons. I sew my ribbons, and afterward, I sew them again because once my ribbon ripped off, so now I sew them twice. The shoes are very personal. Everybody does something different to them. They’re like parts of your body.

ANNABEL MEHRAN — Does your life span as a dancer weigh on you, knowing that it’s not a long career?
MARIA KOCHETKOVA — I constantly think about it. And I think that’s a good thing, because that’s what pushes me to do so much. I would rather take three 20-hour flights and do two performances in two days than not do them. If I didn’t, I’d never forgive myself.