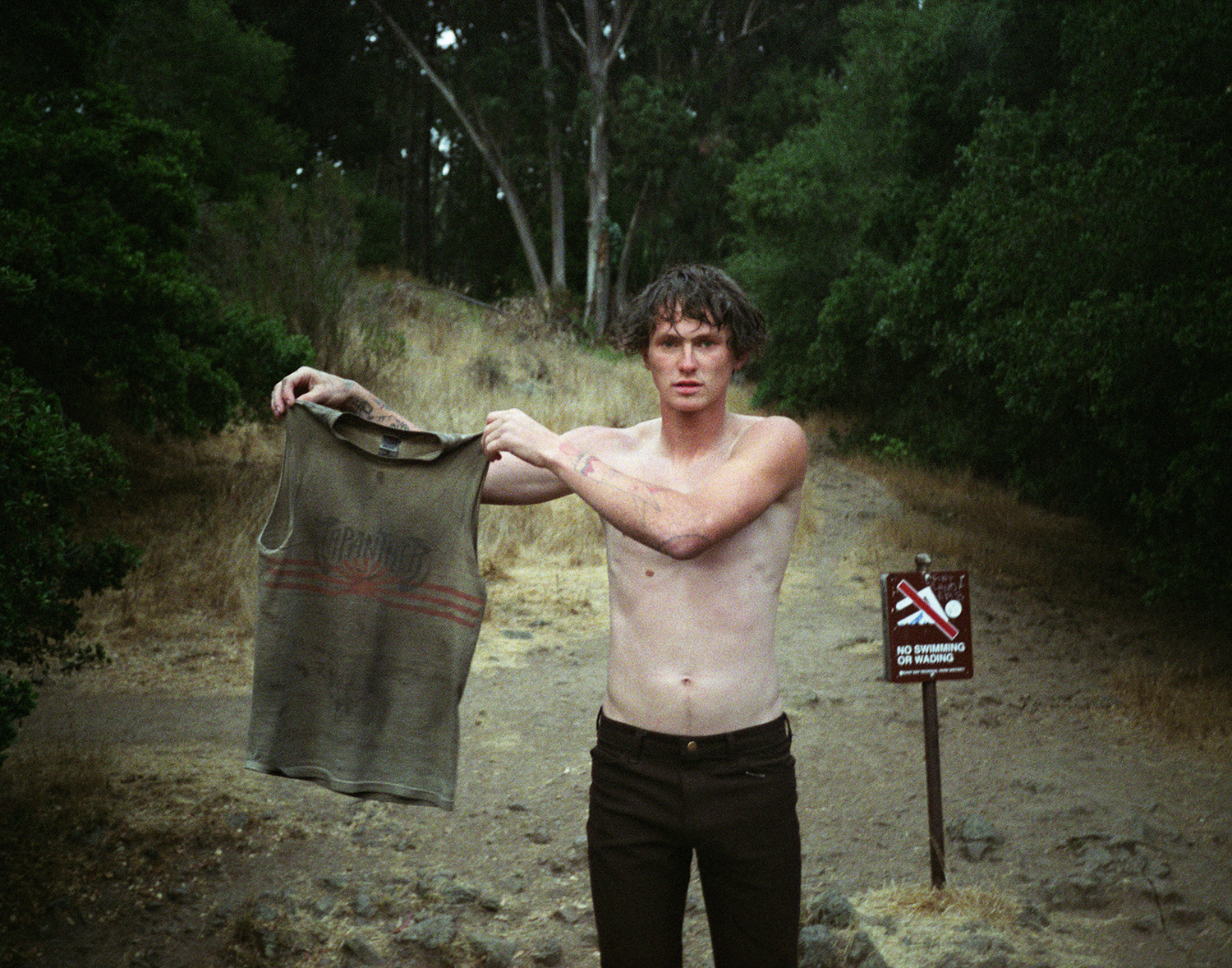 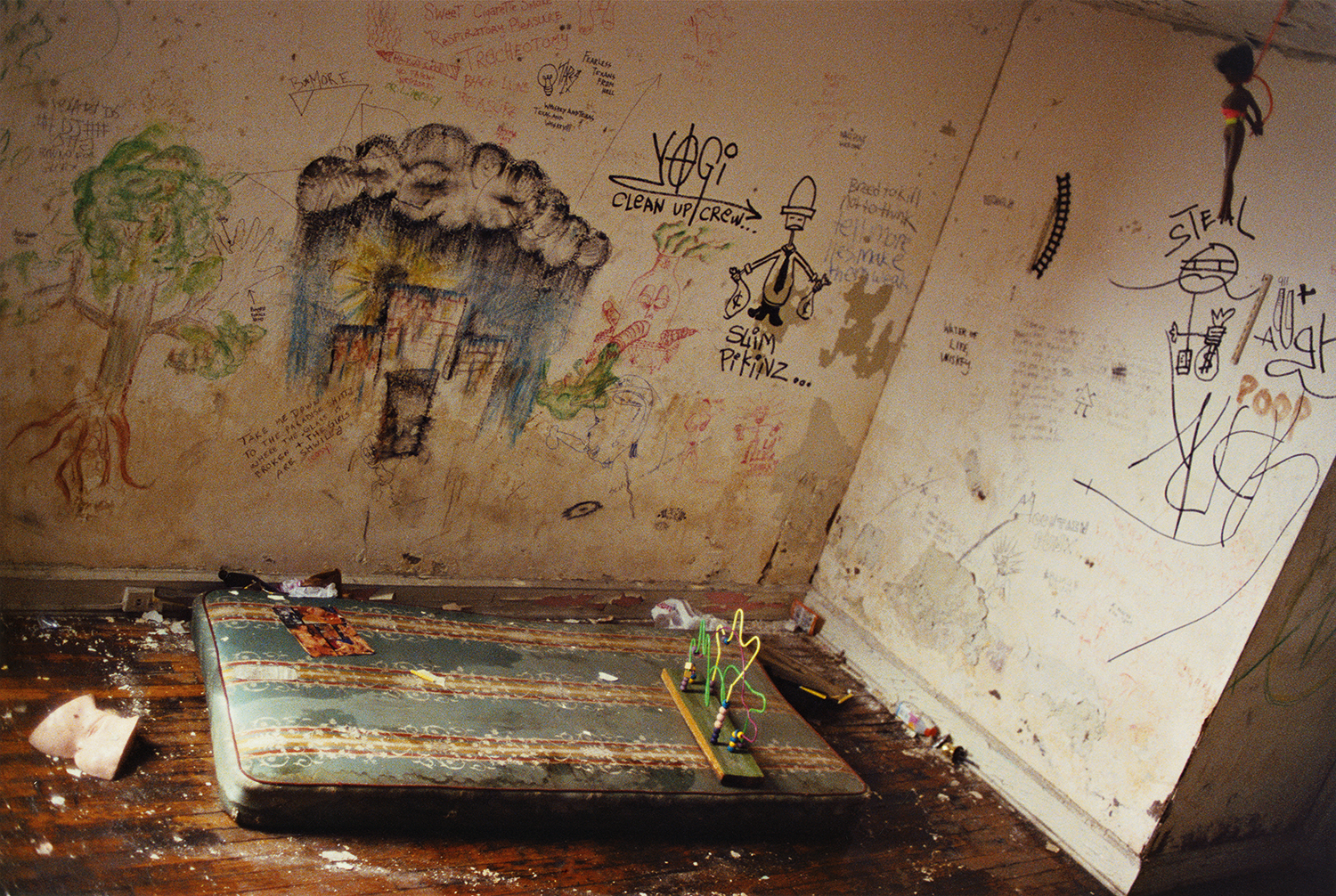 Mike Brodie likes trains significantly more than he likes photographs. In fact, it is not completely clear if he likes photographs at all. Yet the ones he has taken are singularly beautiful. Brodie spent several years crisscrossing the United States as part of a loose network of itinerant wanderers who travel for free by catching rides on commercial freight trains and sometimes sleeping in the forest. That community is documented in Brodie’s book of romantically evocative photos, A Period of Juvenile Prosperity, from Twin Palms Publishers. Looking at these images, filled with moody, rich colors, dynamic compositions, and subtly confounding subject matter, it’s hard to believe that this was all just a passing hobby for him. When I spoke to Mike, he was visiting the world’s largest train yard in preparation for his new job as a mechanic for the Union Pacific rail line.

KEN MILLER — You’re in Nebraska now?
MIKE BRODIE — Me and my girlfriend are in North Platte now. We’ve been on a road trip, paying for it by hauling stuff for people on Craigslist. We pulled a trailer full of barbeque equipment from Iowa to Nashville, then picked up some portable grand pianos that we’re taking from Nashville to LA.

KEN MILLER — I remember seeing your photos on Myspace at least six years ago. You’ve been showing them publicly for a while, but it seemed like you were ambivalent about turning the photos into a book?
MIKE BRODIE — I just wasn’t ready. In 2004 I made a website called Plrds.com and started posting other people’s Polaroid photography, in addition to my own. In 2006, I made a website for my 35 mm photos. Within two years it was all over the Internet, and there were already offers to make a book. But I didn’t want to enter into the art thing.

KEN MILLER — What convinced you the time was right?
MIKE BRODIE — I knew I wasn’t going to take any more photos of that stuff. Which isn’t really true, because I’ve already ended up taking more. But I don’t know if I’ll ever take photos seriously again. The book is done and now I’m moving on.

KEN MILLER — The cliché about anyone who makes art is that they have some sort of internal drive that forces them to create or that they have a vision that they must express. The idea that you would stop and move on to something else doesn’t fit with that idea.
MIKE BRODIE — Good.

KEN MILLER — At what point did you realize you loved trains more than photos?
MIKE BRODIE — There wasn’t really one moment. It was a transition that relates to growing up. I’m not going to be an artist. It’s not for me. I get way more satisfaction out of hard labor or using my mind to take things apart. I’ve always been like that. I just get joy out of that. When I was a kid, I’d work on BMX bikes. In 2003, I got an old pickup truck and ran it on vegetable oil for almost a year, with no prior mechanical experience. Long story short, I realized I wanted to be a mechanic professionally.

KEN MILLER — Obviously, there was a point in your life when you were interested in photography, if you set up a website for it. How did you get into that?
MIKE BRODIE — It developed directly from BMX bike riding. My mom and brother moved to Pensacola, Florida, when I was 14. I was already a BMXer, hanging out with skaters. I was really into BMX bike videos on VHS tape, and I thought I wanted to make my own. I worked at Albertsons grocery and saved up $1,250 to buy a camera on eBay. It took forever. I used that camera to start shooting and editing my own videos. BMX got me interested in punk music, and I met this punk girl who introduced me to some train rider kids who were staying at her house. I guess she had a crush on me, so she asked me out on a date. I’d never even had a girlfriend. I was scared of them. She took me to a punk show in Pensacola, and I really felt like I fit in. I was a weirdo and I liked getting into trouble. All of a sudden, overnight, I didn’t care about BMX anymore. I left town and started riding trains. I shot a couple of videos that I threw out like an idiot. Then I learned to start taking Polaroids. I started looking at photos in National Geographic and learned about composition. I remember I got my girlfriend to pose and it came out real nice. So I was like, “I’m going to take more photos like this!” 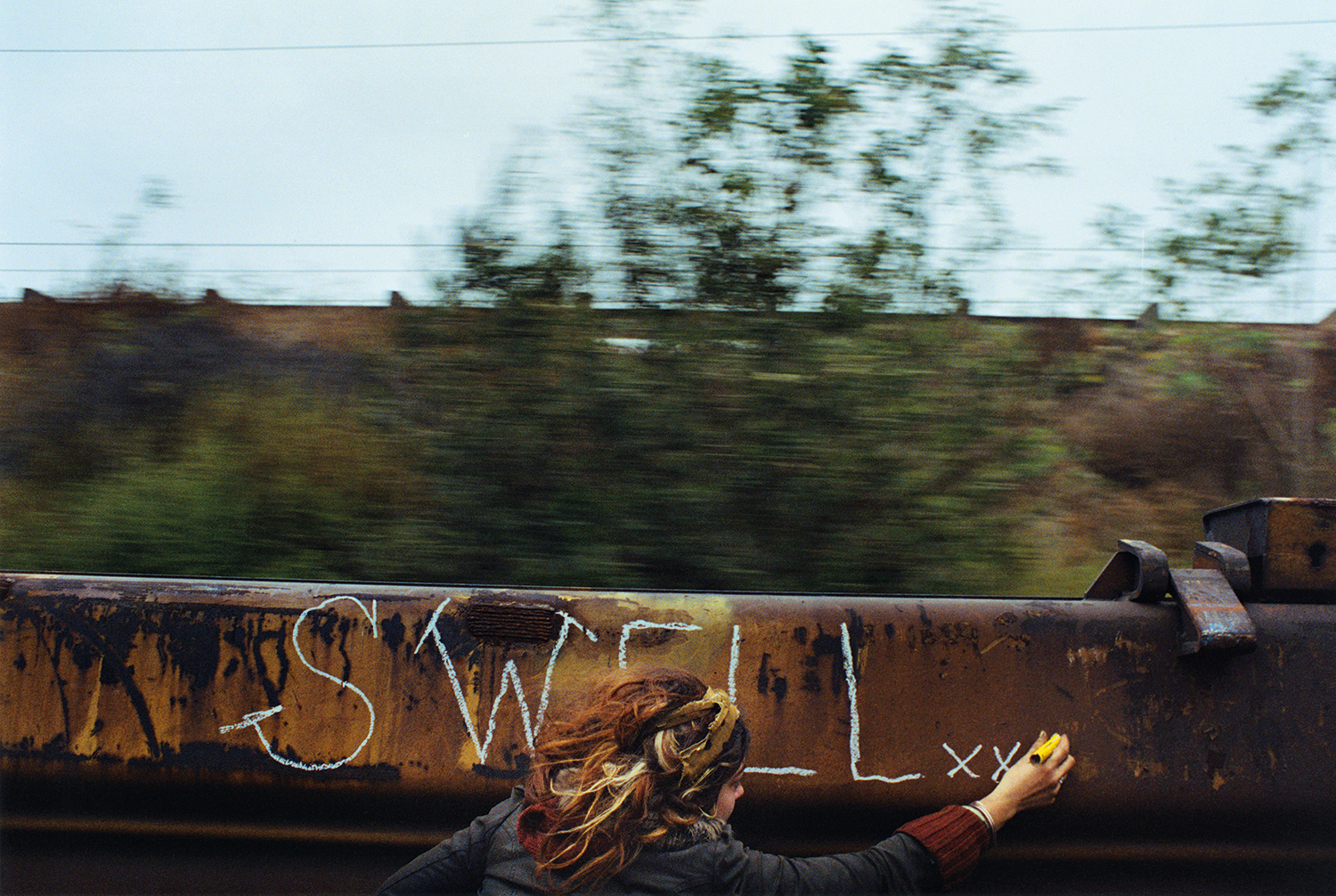 KEN MILLER — When I first saw your photographs, I was struck more by the color and composition than the subjects. You are creating these dynamic angles with a lot of movement in the frame. That can’t have happened just by accident! To be honest, it’s always been hard for me to believe that you never had any formal training…
MIKE BRODIE — Well, thank you. I realized that my practice with Polaroid is what trained me to compose photos properly. Each pack of film cost 15 bucks, so I didn’t want to waste it. I’d sit there and focus over and over, like 20 times, until I knew the picture was perfectly focused. People thought I was taking tons of photos, but I was just sweating each picture. That practice of being very careful taught me to compose the photos I shot with 35mm film. A lot of photos in the book, and a lot of the really good ones, are the “in-between” shots, where I didn’t know if they’d come out good or not. The photos I was really trying to get were these posed portraits. I really hate those photos and never want to do that again. Really, all the good shots are candid. There were tons of times I’d be sitting with a group of people and I’d just hold my 35mm camera to me eye, sitting there not saying anything, staring through the camera.

KEN MILLER — How did you realize which photos looked “right”?
MIKE BRODIE — I learned a lot by working with Paul [Schiek], and the book definitely looks different than what I would have made four years ago. I just scanned through all the photos and the ones that go “Boom!” are the ones I chose. Whatever, it’s just the creative process of art… It’s your own mind and it’s unique to you. So you’re allowed to say, “I don’t fuckin’ know.” The picture tells me that it’s good.

KEN MILLER — Do you think taking pictures helped make you more comfortable interacting with strangers on your travels?
MIKE BRODIE — Yes and no. For the most part, I was extremely uncomfortable taking photos. I would have rather just been experiencing life, because I really did get so much joy out of traveling and riding trains. Taking photos, you are separating yourself from the experience. The moments where my camera was in my backpack were the real moments. But the camera was a useful tool in that it gave me an excuse to interact with people or an excuse to go somewhere. I became interested in going places just because I wanted to ride those trains. Every train has a symbol and a name. Ninety percent of the time, I was by myself, because I wanted to ride those particular trains and mark them off my map. I didn’t care, because I knew I could just sleep in the woods. 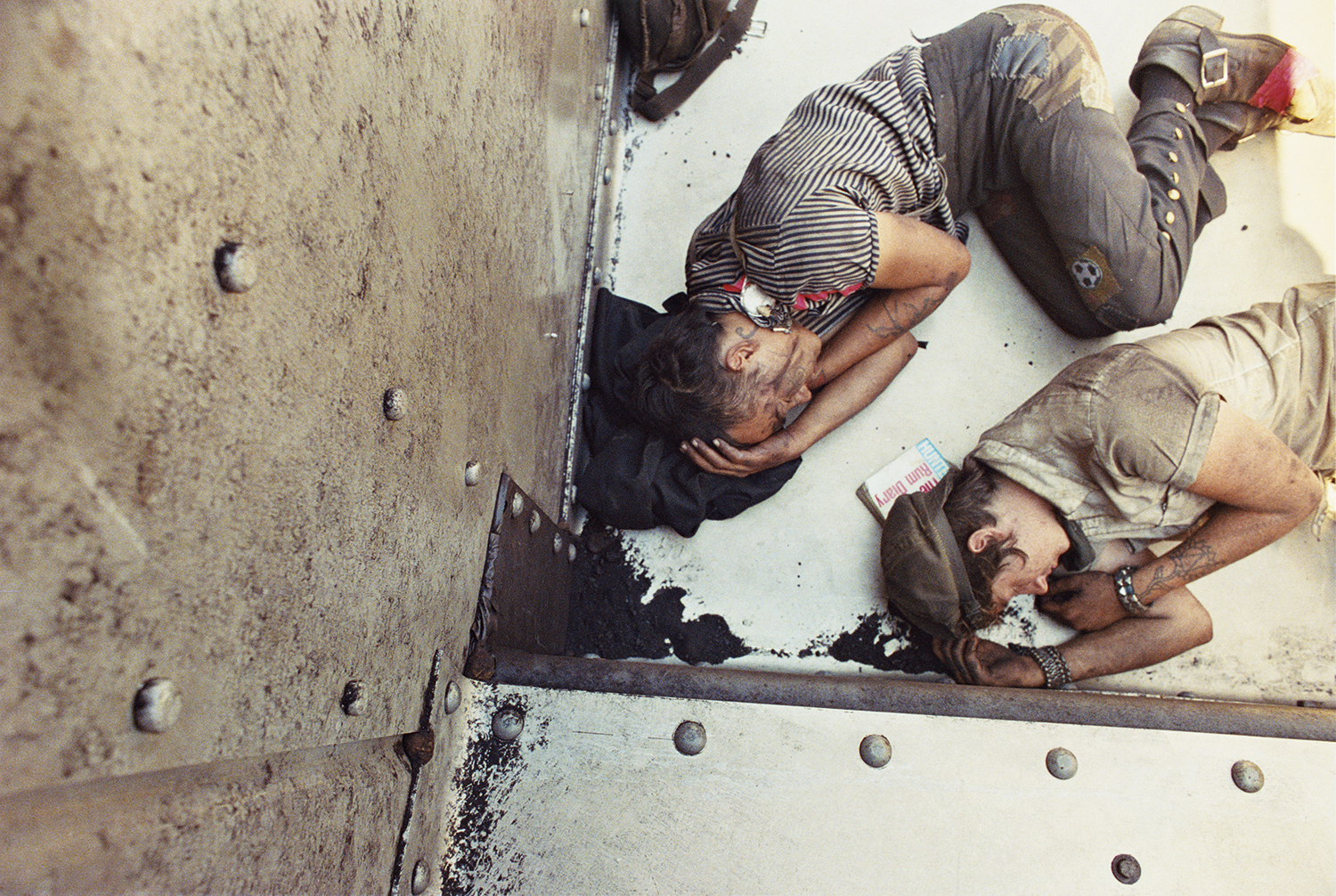 KEN MILLER — For a lot of people looking at your photos, the images are very romantic but also a little bit threatening because they show an alternative to the way most of us live within society. Is it at all political for you?
MIKE BRODIE — Probably at first it went hand in hand with some pretty naïve politics. But for me, it was just that I liked riding trains. You get adventure and you’re outdoors. Throughout history, there have been the people who have done it because they are down and out, but there have also been people who have done it just for the thrill of adventure. Doing that immediately puts you outside of society. So if you look at a big box store or a strip mall or suburbs from the train, it’s easy to be like “fuck that.” But then you realize you wouldn’t have the privilege of hopping a train without that society. You’re getting a free ride on a train that is transporting goods for people to consume.