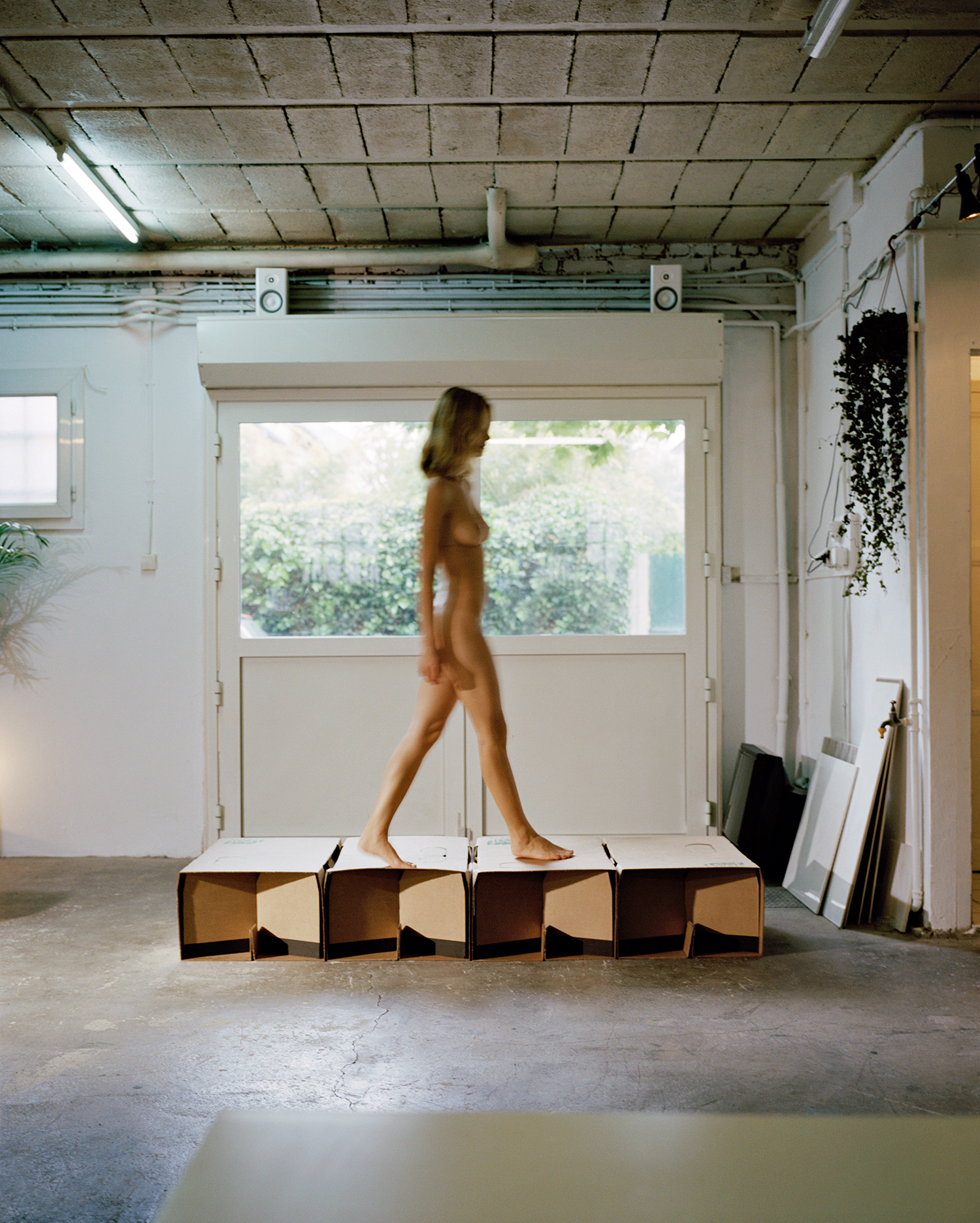 Studio NOCC is a design duo based in the north of Paris and comprised of Juan-Pablo Naranjo and Jean-Christophe Ortholieb. They are interested in the innovation, environment, and social utility of their creations, beyond solely formal aesthetics.

CAROLINE GAIMARI — How did you begin making furniture using cardboard?
STUDIO NOCC — There were two projects done with cardboard. The first was Juan-Pablo’s diploma project, which is called “Help Me Darwin,” and which is a sort of mutant cardboard furniture kit that adapts to different needs when someone is in a new habitat and doesn’t have anything. It consisted of a case that contains layers of cardboard with which you could build a series of pieces of furniture that fit the first four stages of habitation. First, you create intimacy by building a screen. Then you decide where you will sleep that night by destroying part of the screen to build a bed. Third, you figure out where you will eat and destroy another part of the screen to turn it into a table. Then, to socialize with your immediate surroundings, you use the rest of the screen to fashion two stools, one for you and one for your neighbor. It creates an environment.

CAROLINE GAIMARI — This was the first step toward making the cardboard beds that are now being tested for humanitarian use?
STUDIO NOCC — Yes. The second cardboard project was an evolution of the first one, but thought out for real-life emergency relief situations. First, we explored a more technical way to build a comfortable bed using cardboard. The bed, as you see it today, can hold more than a ton of weight. The other key development focus was to be able to fabricate it at the closest cardboard factory near a relief area. We could send the blueprint, and as cardboard is used everywhere in the world, so the bed can be produced anywhere. 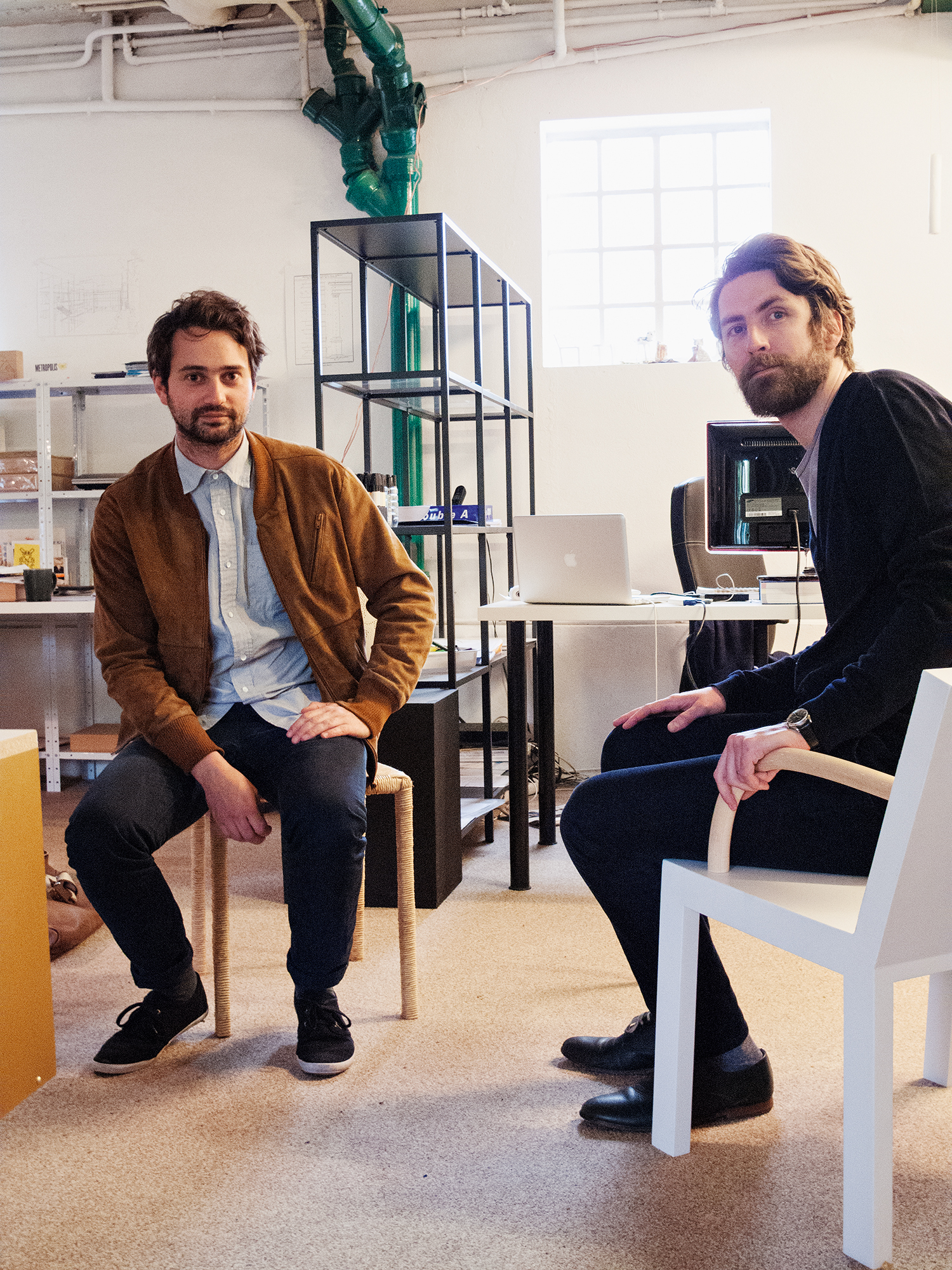 CAROLINE GAIMARI — How is this bed intended to be used?
STUDIO NOCC — This is a product that has been sent to many places where NGOs are working, but it’s still in the test phase; it’s really hard for products to be accepted for humanitarian aid because if they aren’t perfect, it will be a mess as the quantities are so large. When we tested it in Niger, we gave the people the bed already built. The way they started using it outside of its primary bed function was exactly what we intended. During the day, it was used as a sort of dresser to stock clothing. They also turned it upright to dry grain in the sun and serve as a feeding area for animals. We wanted people to be able to transform and use it however they needed to. It’s made of four boxes and has many possibilities in terms of function. All four in a row creates a bed. If you just use one, you have a seat. Two, you can have a low table, for example.

CAROLINE GAIMARI — Are they meant to be temporary?
STUDIO NOCC — Cardboard is not something that will last forever. Usually when they build camps, they don’t want them to last forever — they want them to have the shortest lifespan possible. When the earthquake in Haiti happened, relief workers didn’t know whether or not they should send tents, because they didn’t want people to install themselves on a long-term basis. The cardboard beds can last up to a year if they are taken care of, but at the same time the message is still that they are temporary. Relief workers don’t want to give the impression that this is a permanent new home.

CAROLINE GAIMARI — Is it comfortable once it’s put together?
STUDIO NOCC — The bed is made in four modules that you assemble. It basically looks like four boxes placed one after the other. But the inner structure and the outer layer, when put one after the other, create a curve where the body is supported from the sides. It’s not a flat surface. By bending, the cardboard provides resistance and support and adapts to the body. We did studies with an ergonomics expert, based on the relative comfort of a hospital bed with a certain amount of pressure per square inch that should be attained. In our bed, only one percent of your body will ever reach that level. But when you measure comfort, there is something like 11 different factors to take into account: whether it isolates from the cold or the mental comfort of the shape of a bed, for example.

CAROLINE GAIMARI — Is there an environmental reason for choosing cardboard?
STUDIO NOCC — For the concept we were developing, cardboard was more of a conclusion than a beginning. We wanted to create a bed that could be fabricated locally, that could resist and be adapted to several uses. “Think global, act local,” was really the main idea in order to save transportation and pollution costs as well as to facilitate logistics. The most important thing was not to use environmentally friendly material, but to create something that could be produced locally and avoid the unnecessary energy and time spent on transportation. This is more about environmental thinking on the global chain. But that doesn’t mean that the world of the future should be made out of cardboard.

CAROLINE GAIMARI — What else have you been working on?
STUDIO NOCC — In 2009, we began developing a formula for working with 3-D printing. This production method allows you to produce uniquely conceived objects without varying the production costs. The result can be different each time, because you aren’t starting from a mold. We asked how we could make something unique and personal by using criteria unique to each person: fingerprints, eye retina, DNA, but in particular the voice. We chose to exploit the voice because we both were fond of the beautiful graphic images that could be created when speaking into oscilloscopes. These renderings are very aesthetic.

CAROLINE GAIMARI — What is the process?
STUDIO NOCC — We began recording the sound of people saying the names of objects and using the sound wave visual to create a mold for that object; the spoken word “lamp” became the blueprint for a lamp that was unique to the person whose voice created it. We created software that allows anyone to create the blueprint for his or her personalized object. For example, a family asked us to make vases with the name of each of their children, to put on their mantle. The vase has a content that is more abstract and personal than just the object itself. We didn’t design an object; we designed a framework that allows the user to say a word in a given number of seconds, which will be the foundation for the creation of the object. You create the object, but the end result creates a relationship with the user. Instead of trying to sell thousands of objects, you create something that already has an owner before it truly comes to life.