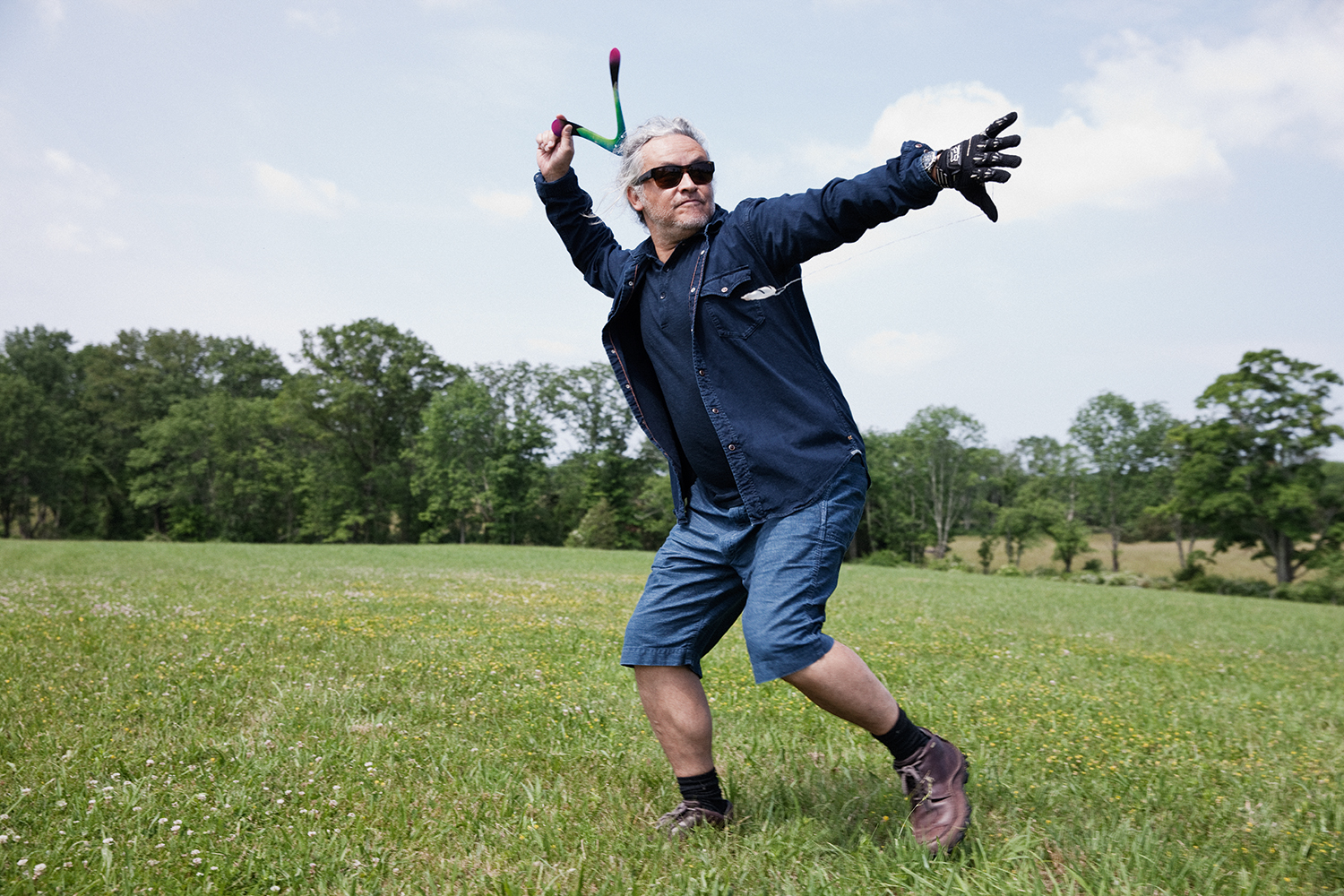 ALEXIS DAHAN — When and how did you start practicing the boomerang?

GABRIEL OROZCO — I guess about six years ago. I was spending summers in Burgundy, in France, buying kites for my son to fly. One shop sold boomerangs, which looked quite good, not like fake, touristy things that don’t work. I bought a couple and I spent a whole summer trying to fly them. After that I became passionate about boomerangs. Now it’s somehow my favorite sport. I have many different ones now.

ALEXIS DAHAN — How is a boomerang made? And could it be called a non-industrial object?
GABRIEL OROZCO — Boomerangs are non-industrial because of the limited demand. It’s a difficult sport. It’s not easy to throw. A lot of people are quickly disappointed because it’s so hard to throw, and then it doesn’t come back, and then you lose it and don’t want to hear about it again. First you need a very big field to learn to throw one. It goes very far and many fly away. That combination makes it unpopular. And then there are many shapes and many different boomerangs made of different materials. The original boomerangs were made of wood, but even in wood there many different techniques for making one, from one piece, laminated, or strip laminated, which bends the wood in layers. They’re also made of carbon and all kinds of plastics. They need a very precise design and it has to be cut and polished by hand. So it’s not industrial and the market is very small. Very few people in the world throw boomerangs. You have championships, world cups, and all that — I’ve met these people — but it’s a completely amateur sport. No one lives from boomeranging. They have jobs and most are engineers or mechanics or artists or scientists. I fly boomerangs at an airstrip. They fly planes; I fly boomerangs. Everybody flies something.

ALEXIS DAHAN — What makes a good throw?
GABRIEL OROZCO — You have to play with the wind and follow it. You first have to find the direction and then you have to move some degrees out of its current. You face the wind and, if you’re right-handed, you move to the right, 10 degrees, 45 degrees, or 90 degrees, depending on the boomerang and the strength of the wind. You have to throw it vertically. Normally people throw it like a Frisbee, which doesn’t work. You also have to tilt the boomerang some degrees and calculate the height of the throw, whether it’s low or high up in the sky. Every boomerang is different, and you play with the tilt, orientation, and level in relation to the ground — and also to your strength. If you throw it perfectly it comes back to your hand. 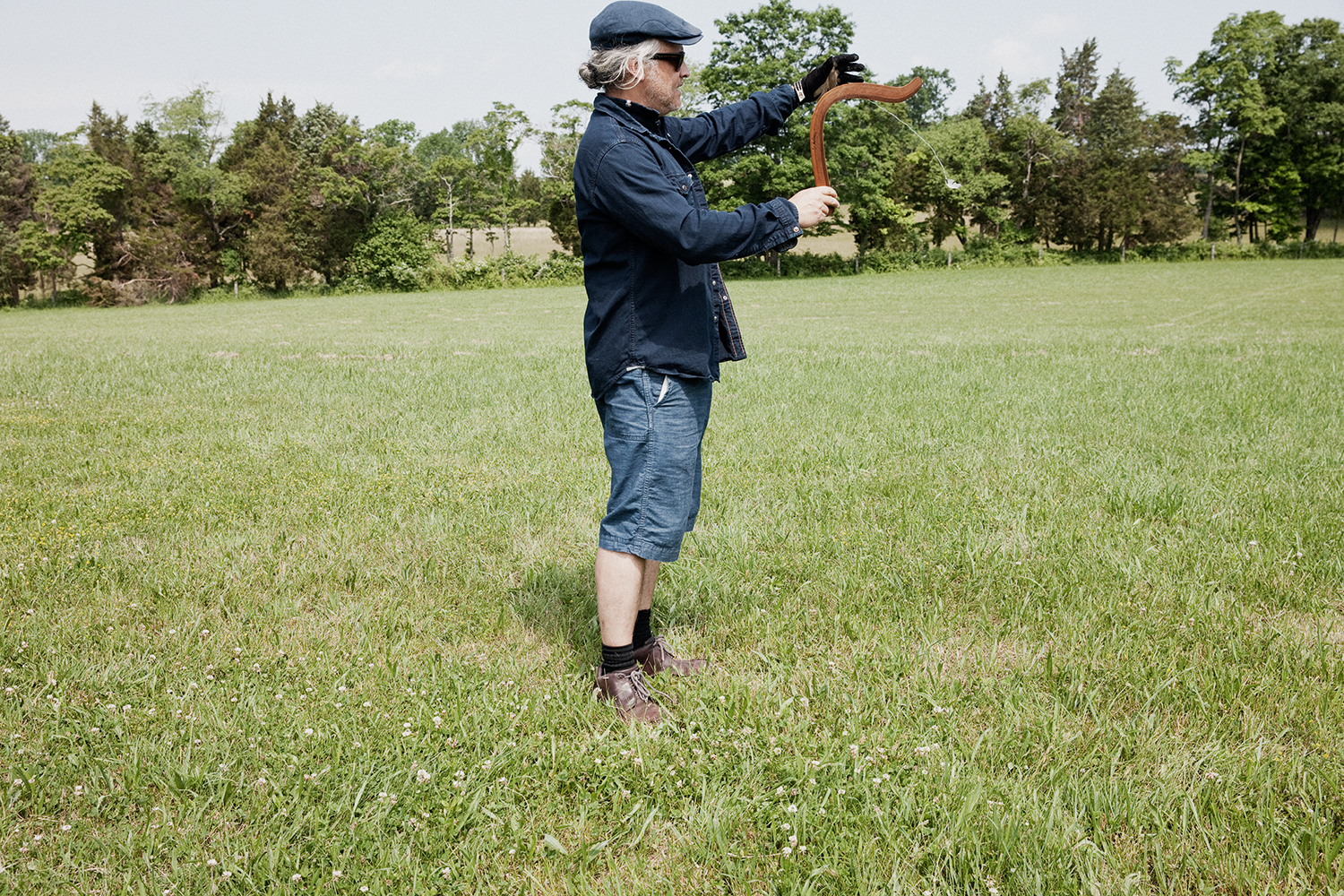 ALEXIS DAHAN — So what makes a perfect throw.
GABRIEL OROZCO — The perfect throw, obviously, is one that you catch. For me it’s like a Japanese archery ritual: the position of the body, how you breathe, how you feel the environment. To make the throw very accurate has something to do with body concentration and an awareness of the environment, because you’re playing with the landscape and the elements.

ALEXIS DAHAN — Is it a ritual?
GABRIEL OROZCO — It’s something like one. In the beginning, when you throw boomerangs, it’s hard to catch it because you have to get to know the type of wind. You throw many times before you start to catch them. Then, too, every boomerang is different. Some you catch quickly, some go quite a long distance, some not so far. Normally when you throw it, it’s very straight, kind of low, and flies in a perfect circle and then comes back to your hands. It has to come to your hands, without you moving. You have to throw it again and again. In medium-range boomerangs you always have to chase the boomerang when it comes back, because it’s very rare that it comes back to exactly where you threw it. Normally you have to run. Then others you throw in the sky and they float a long time and the wind takes the boomerang and you catch it somewhere in a range of 50 meters from where you started. So the perfect throw is just the right strength, the right arc, and then it comes back to you.

ALEXIS DAHAN — It seems that one can link boomerangs with aspects of your art, such as circularity or playfulness. Can you tell us about that?
GABRIEL OROZCO — I ask myself why I didn’t discover this sport a long time ago. It’s perfect for me. The boomerang itself is a sculptural object — its dynamic is so beautiful. It’s also a very precise instrument, and what you do is play with the landscape — you intervene with the landscape using a very simple gesture and an object that comes back to you. The elements, playing with the landscape and the circular process, which starts and ends at a beginning, is like my work when I play with or transform objects or take photographs — or even in my drawings, where there’s a notion of an end right from the beginning.

ALEXIS DAHAN — How often and where do you play?
GABRIEL OROZCO — I try to play three times a week. When I’m in New York, I practice at Pier 40, on the Hudson River. It’s close to my house, so I go there and practice when it’s empty, normally at lunchtime. 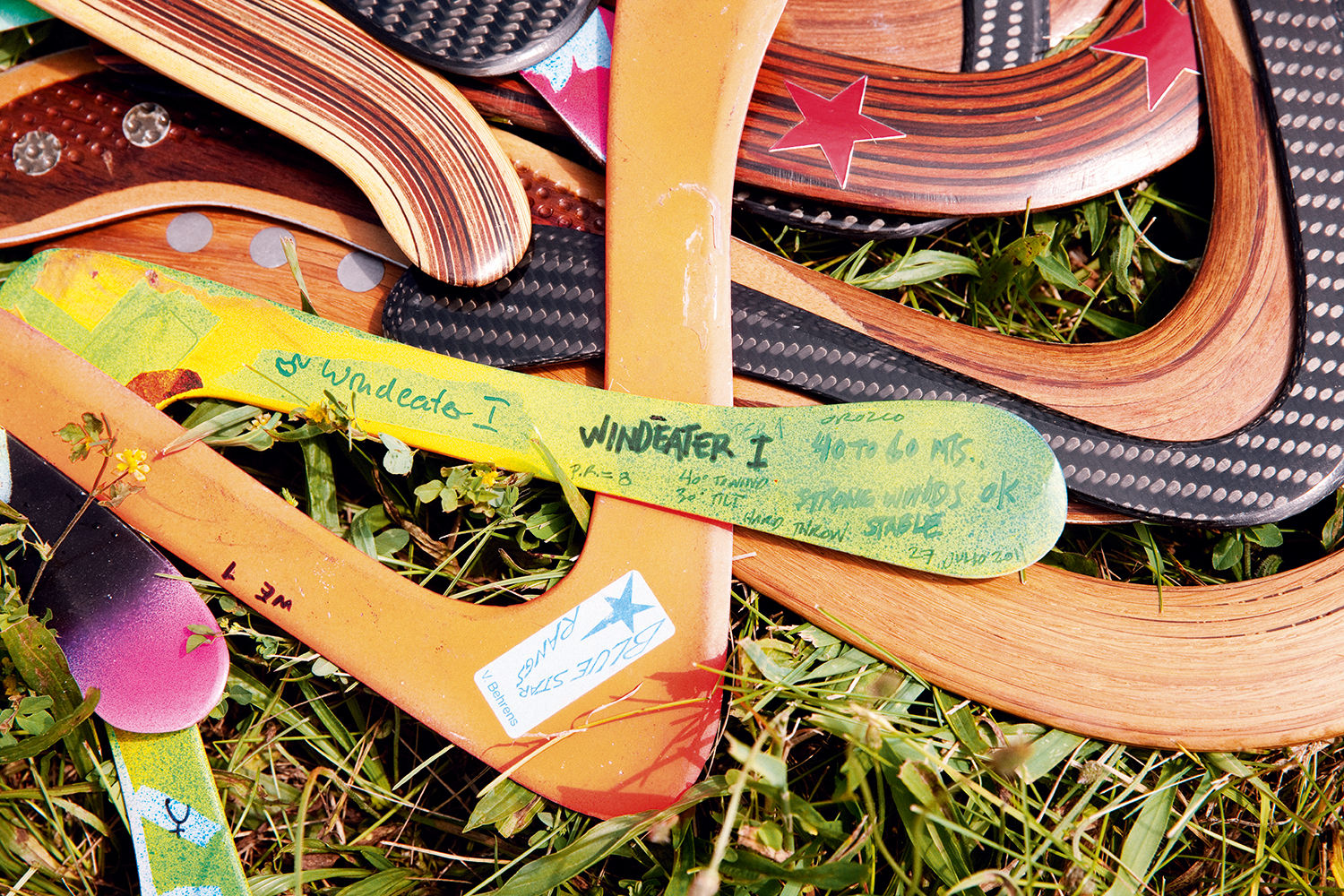 ALEXIS DAHAN — Isn’t that a soccer field?
GABRIEL OROZCO — It’s two soccer fields together, because you need more than one soccer field for the medium-range boomerangs. On weekends I come out here to the farm and play long range. In France I go to my farm in Burgundy, and when I’m in Paris I sometimes go to the Bois de Boulogne. Some French boomerang throwers are very good. There’s a little community of throwers in Paris.

ALEXIS DAHAN — You’ve said that art can be made from a simple gesture. Have you found echoes in your art from practicing the boomerang?
GABRIEL OROZCO — Well, I don’t believe in utopias, so in my art I always try to be realistic, dealing with real facts, everyday phenomena, and things that are happening. It’s not like a preconceived idea. So the way I work is always changing, and it’s also a way to be aware of the present time. I love games and sports, so I’ve worked with them in relation to landscapes and instruments. When I transform a ping-pong or billiard table, or photograph soccer players, I think of how games and sports re-create the landscape and create a connection with reality, even if sports are a kind of abstract human invention, with rules and an abstract use of landscape. I’m not pretending that boomerangs are a form of art; it’s a private practice. I do it for myself, but the fact that I do it obviously influences things in my art. So this type of activity is, in a way, like driving a car. Driving, when you enjoy it, can lead you to discover things, to moments of pleasure, to some kind of aesthetic or philosophical aspect of reality. So, for example, I’ve never made my own boomerang, but maybe at some point I will. Until now I haven’t been interested in fabricating one. What I do is look for very good boomerangs. Some are very old, some are new, some are in different materials. I’m interested in the throwing activity, the practice of the sport.

ALEXIS DAHAN — An activity that doesn’t produce anything, which is pure in some way, but also renewing and exhausting itself all the time.
GABRIEL OROZCO — Yes, exactly. And it’s always different. It’s always the same, but it’s also different, and for me it’s quite fulfilling and rich. You’re alone in an empty space, and it can be dangerous. If you hit a person with a boomerang you can really hurt them.

ALEXIS DAHAN — Was it a weapon in Australia?
GABRIEL OROZCO — Well, no. The boomerangs that return are not weapons. In fact, you cannot hunt with a boomerang that returns. They were probably used as a kind of magic sport or ritual. You can, however, scare birds if you throw one into a lake. They hunted with something like a hook, which had a similar shape to a boomerang, with one short arm. When you throw it, the dynamic makes it go very far away and very fast; so when it hits a kangaroo, it can kill it. But this is a straight shot; it doesn’t make a curve. Boomerangs are also a pastime that began a long time ago. People believe it’s from Australia, but some say they’ve found them in Poland, and some say the Egyptian pharaohs had boomerangs in their tombs.

ALEXIS DAHAN — I wonder about the etymology of the word.
GABRIEL OROZCO — I think it’s Australian, because they were discovered in Australia, and the natives still used them. The word comes from these people.