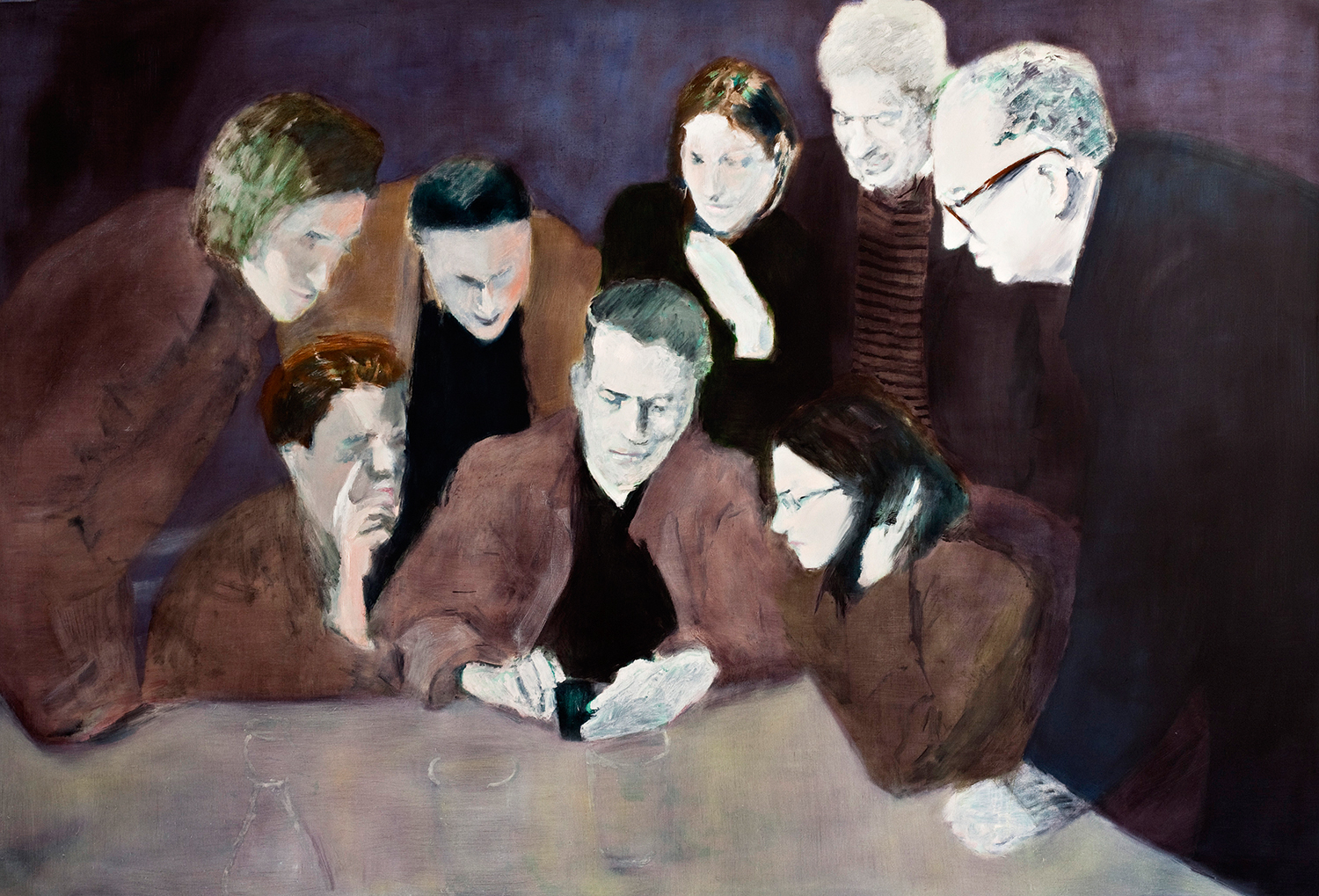 Looking at the Blackberry, 2013, oil on canvas, photo by Gaetano Alfano

internet
blessed we are unconnected

We are going to write this text without ever being connected to the Internet. Neither to confirm nor to deepen nor to distract. This first version will be written in pen, as we are no longer used to it.

Our calligraphy has become more difficult, and we are not even sure of being able to decrypt it. But it is not only a problem of handwriting: something in the way we write and in the way we think has changed irreversibly.

Over the past 15 years, the culture of knowledge that has characterized the origins and accompanied the evolution of our species has given way to that of research. We are followers, searchers, temporary finders. We spend most of our waking time looking for useful information: places, contacts, news, images, definitions, tools, and data. Maybe we continue to do that also while we are sleeping.

We are the Connected: people who need to be online to be able to fulfill their own existence and their role in the society. At the moment we are a bit more than 40 percent of the world population: a minority, but not for long.

We are the younger and more numerous demographic reality, and we are constantly increasing. A diasporic-natured population intended for omnipresence. Perhaps we are conquering the Earth. They call us the people of the Internet.

We do not have governments, nor ministries, only freelance ambassadors. One of them, among the most influential, is Miltos Manetas (Athens, 1964), artist and founder of the Neen movement, the Electronic Orphanage, and the Internet Pavilion. The latter, on during the Venice Biennale since 2009, is a representation of the Internet State in the world of nations.

In 2013, from May to September, the Internet Pavilion is located in a church: the ancient oratory of St. Ludovico, near the maritime station of the lagoon city. It is the Church of the Nets: a place for a temporal and spiritual cult at the same time. St. Ludovico is from now on the new saint of the Internet! The World Wide Web already had a saint, however, as did television (St. Clare). In 2002 the Pope had proclaimed the protector of the connections and programmers to be St. Isidore, an emeritus representative of the old civilization of knowledge. Isidore was a bishop from Seville who had given birth to one of the first encyclopedias in history. An encyclopedic saint, therefore, who could even be fine for the first Internet, but not for the one we are experiencing now. St. Ludovico from Toulouse is a less cerebral saint; he has even been called the patron of the drained. It seems that his corpse was found almost intact, except for the brain, which had been stolen in unknown circumstances. Perhaps this saint who lost his mind, could help us to better find the spirit of our time, — an icon of mankind and its external memories, the networks where we store a more and more consistent part of our knowledge and wandering. The Internet, like an extension of mind, between the impetus for expansion and the danger of schizophrenia.

Before entering the totally connected era, our vow is to remember the disconnection, and celebrate it.

Our offering is this text.