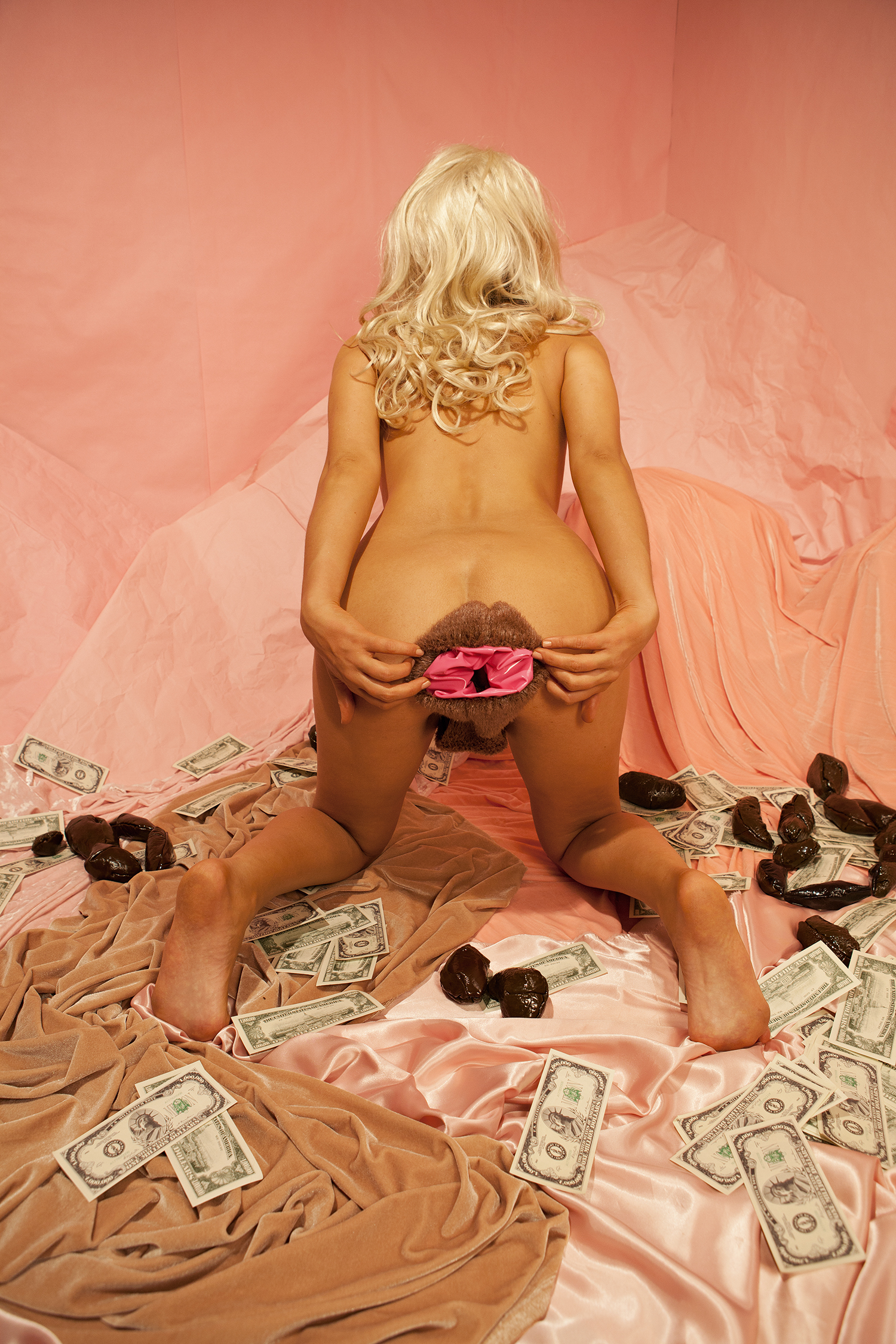 ZOE LUKOV — You grew up on a farm? Do you know when a blueberry is ripe and ready to be picked?
MADELEINE VON FROOMER — Yes, absolutely. I sorted blueberries every summer, picking out the red ones and the bird crap ones and the mushy ones, so that the perfect blueberries would go off to be packed.

ZOE LUKOV — What was it like growing up in Mississippi and New Orleans?
MADELEINE VON FROOMER — The South is really sexual and sensual. It’s hot, slow and sultry. And I was surrounded by the natural world. A lot of the games I played, in retrospect, would seem disgusting now: I raced snails up my arms, I kept a family of maggots under a tree for a week — those smelled really bad, I turned puddles into waterfalls…

ZOE LUKOV — You were always playing in the dirt.
MADELEINE VON FROOMER — Yes! I loved the dirty and grotesque. I wanted to see what was behind everything. Growing up on a farm is visceral. You see the process of life and death constantly unfolding around you. I remember one time after it had rained for days, this dirt lane turned into a mini-pond and overnight hundreds of tadpoles were born. I followed their progress, watching them grow until they were about the size of a thumb, when my dad had to drive his tractor down the lane, killing all the tadpoles. It was like a tadpole massacre, with macerated bodies everywhere. All the tadpoles were busted open with their little coiled intestines leaking out of them. That image is burned into my brain. But it wasn’t even sad. It was just simple: this is what the insides of tadpoles look like. 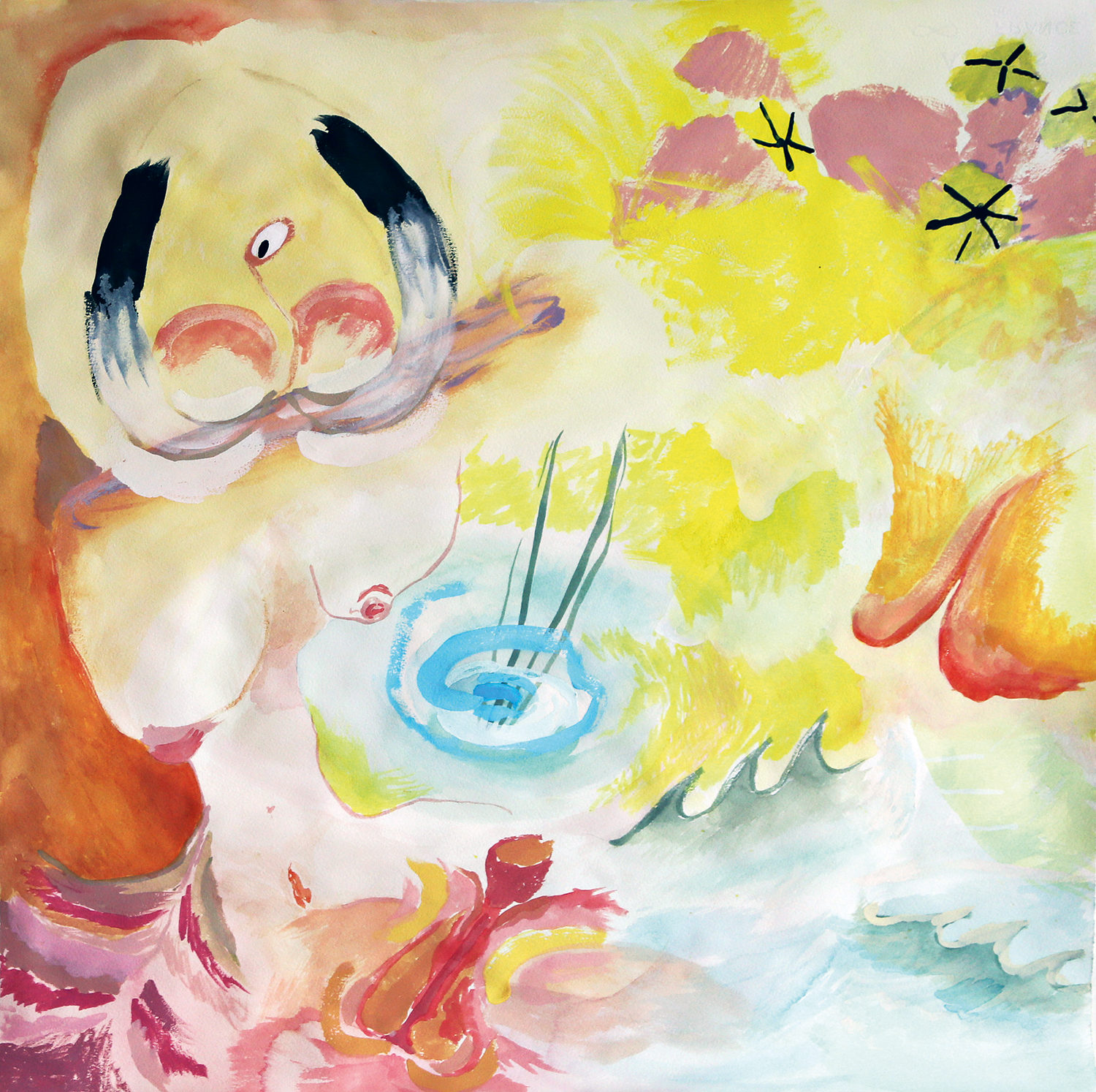 ZOE LUKOV — Were you making art?
MADELEINE VON FROOMER — Yes, I was drawing a lot of cartoons. My father had this dream that I would be a political cartoonist. I made this one cartoon after a trip to the Everglades: a family is hiking through the swamp and sees a sign, “Alligator Lookout 1.2 Miles Ahead.” They finally come upon the lookout, and it’s a family of alligators with binoculars.

ZOE LUKOV — You had a sense of humor.
MADELEINE VON FROOMER — Yes, always. I developed that very early and used it all my life. Humor makes the dark stuff more palatable.

ZOE LUKOV — Was your work always so sexual and campy?
MADELEINE VON FROOMER — No. When I was at Maryland Institute College of Art, I was making what I would call Home Depot art, where I would go to Home Depot and buy anything that looked good to me, interesting surfaces or cool hardware and I would make parts of interiors. I built corners of rooms up on wheels and would paint the walls, install molding and flooring. There was no femininity or sexuality in any of this work. But I was having tons of crazy sex, where I felt alive. And I didn’t feel alive anywhere else in my life. I didn’t understand I could put my sexuality in my work. It was totally separate.

ZOE LUKOV — How did you begin this new body of work?
MADELEINE VON FROOMER — About a year ago I just started painting again. It wasn’t conscious at the time, but I was really feeling out the landscape of the functions of the body, specifically my female body. And I kept coming back to the reproductive and digestive systems. Interestingly, I was battling with recurring health issues in both those systems. Then I decided I wanted to make a pussy suit. I started with a large patent-leather vulva sculpture that I called Big Girl. I started to think of the sculptures as prosthetics, as exaggerated erogenous zones to be attached to real human bodies, even the pieces of shit.

ZOE LUKOV — There seems to be a connection between the tadpole massacre and the biology of the female that you’re exploring now.
MADELEINE VON FROOMER — Yes. I think these images are like a sexual intervention for whoever looks at them. My beautiful friend and collaborator, the artist Kasia Urbaniak, describes the experience of looking at these photos as the cathartic release of shame. 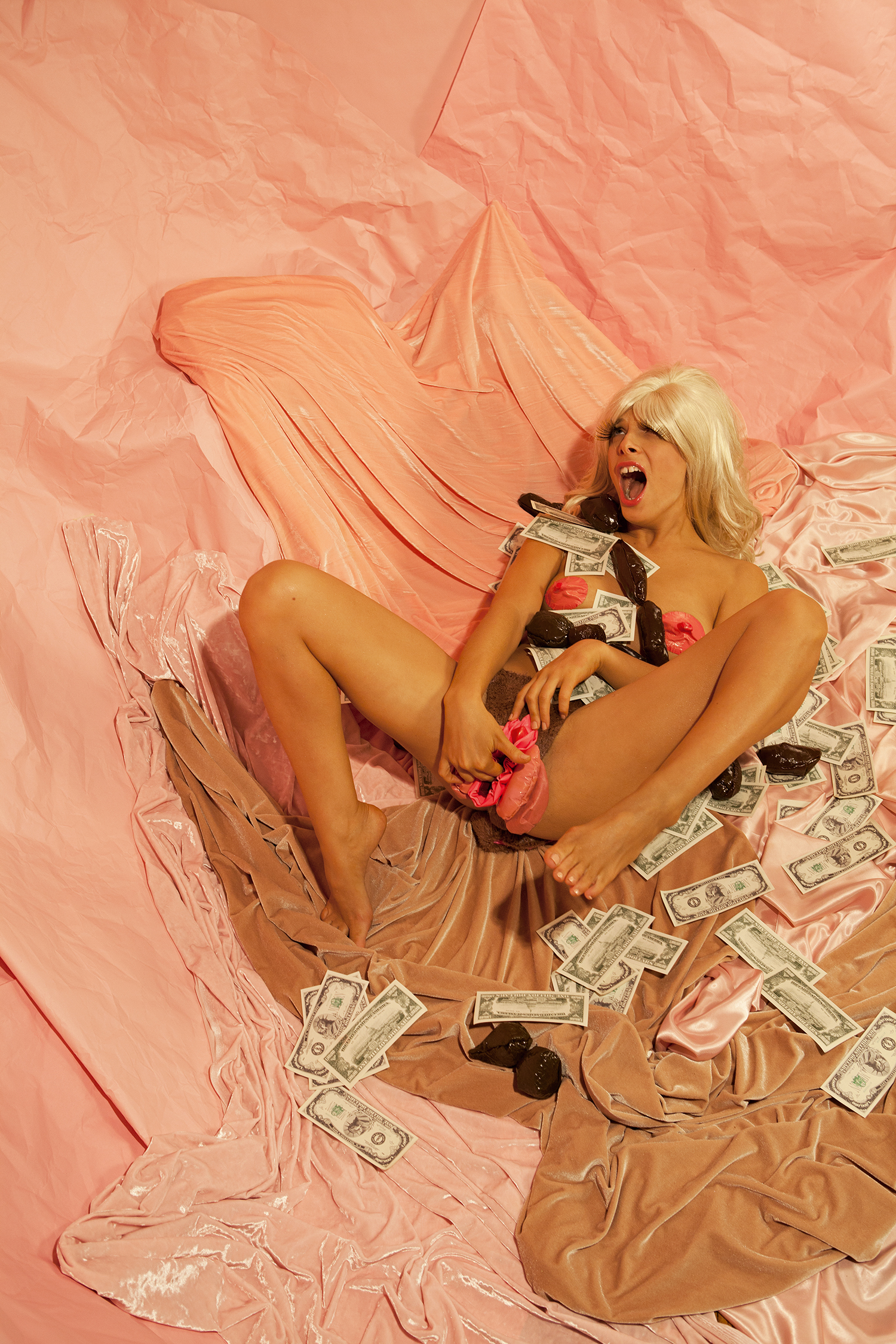 ZOE LUKOV — So how did you transition to literally putting yourself in your work?
MADELEINE VON FROOMER — I wanted to embody that feminine landscape, I wanted to be it. Kasia shot this series. She saw things I couldn’t because I was so wrapped up with being in front of the camera. When I actually saw the finished product, I was like, holy fuck! And then my hands and breasts broke out in a crazy rash and I was itchy for weeks. Kasia was like, “You broke all your boundaries, and your skin breaking out is the physical manifestation of that.”

ZOE LUKOV — How do you see this character Lady Girl?
MADELEINE VON FROOMER — I think I’m appropriating a generic American objectification of woman, and I’m partying in that space. The name is a play on ladyboy. I love the confusion and manipulation around sexual identity in drag and trans performance. In drag you play with the most extreme, most exaggerated, most hysterical aspects of femininity, and I want to do that, too.

ZOE LUKOV — As a thin, white, blond woman you are all of the things that I assume you’re critiquing, are you not?
MADELEINE VON FROOMER — Basically, I’m exploiting myself. What I really want is for a man to look at these images and get a hard-on but also feel sick to his stomach.

ZOE LUKOV — That’s how I feel when I look at fashion advertising. Do you see your work as political and feminist?
MADELEINE VON FROOMER — Yes. And I see myself that way, too. The Dalai Lama said that the world will be saved by the Western woman. I think that women will save the world through pleasure — seduction instead of domination — and that’s why it might work. Really, I’m not sure yet where I fit on the feminist trajectory, but I’m starting with this sex-positive and pro-body platform.

ZOE LUKOV — That reminds me of our conversation about Judy Chicago’s Dinner Table, which by putting pussy front and center was both boundary-breaking and problematic because she was essentializing the vagina.
MADELEINE VON FROOMER — Well I think the vagina is essential! My life is basically run by my vagina. Female biology has been seriously distorted, controlled, or ignored in our culture, politics, and language. Even though these prosthetics are very cartoonish, the biology is all there: the pubic hair, the labia, the clitoris… Making the clit was very important. 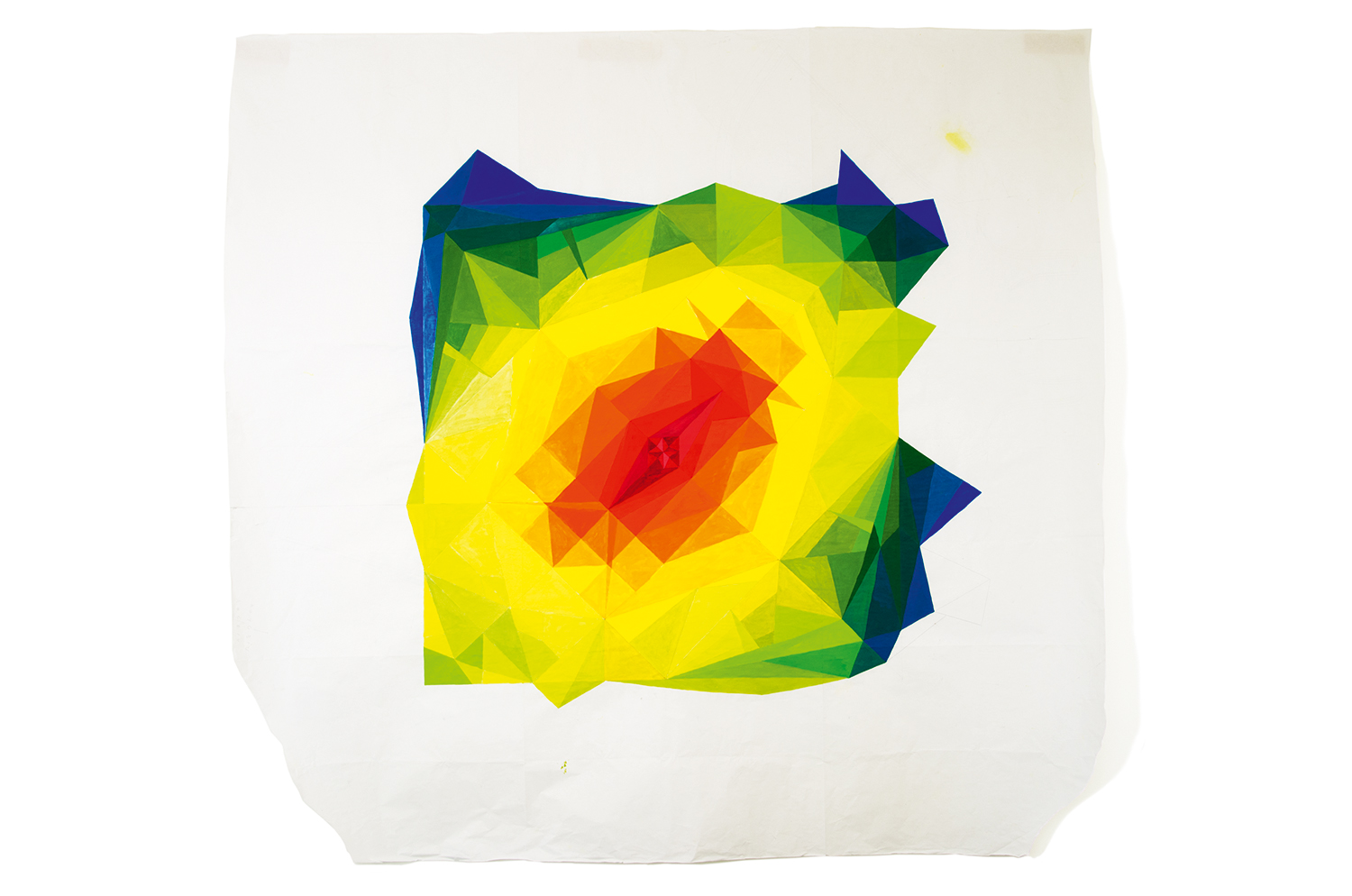 ZOE LUKOV — Why?
MADELEINE VON FROOMER — The clitoris is the most important! And it’s mostly ignored. I don’t think it’s a coincidence that I started an OM practice while making this work.

ZOE LUKOV — Sorry, but you’ll have to explain what an OM practice is.
MADELEINE VON FROOMER — OM stands for Orgasmic Meditation. It’s a timed mediation practice where a man strokes the upper left quadrant of a woman’s clitoris for 15 minutes. It’s goalless; you’re not trying to achieve orgasm or climax but rather just focus on the physical sensation in the moment.

ZOE LUKOV — Like going to a yoga class? You’re going to meditate for 15 minutes, but a strange man is going to touch you?
MADELEINE VON FROOMER — It’s a lot for most people to wrap their heads around.

ZOE LUKOV — What do you see next with this body of work?
MADELEINE VON FROOMER — I’m working on live performance and video with this Lady Girl alter ego. How does she move through space? How does she interact with live humans? What does she do all day?

ZOE LUKOV — And you just moved to LA in May.
MADELEINE VON FROOMER — Yes, I love it here. There’s something happening here now, lots of young artists are moving here. I lived in New York for 10 years, and I just became exhausted. There’s no access to the natural world. It’s also in the mythology of this place — the Wild West, it’s this new frontier with no rules, and you go out there and dig for gold. Also LA is so cool because it’s super plastic and fake with the entertainment industry being here. It’s all about creating alternate realities. Coincidentally, in art school, I loved so many artists that identified with LA: Paul McCarthy, Chris Burden, Ed Ruscha, John Baldessari, Lari Pittman… God, they’re all men.