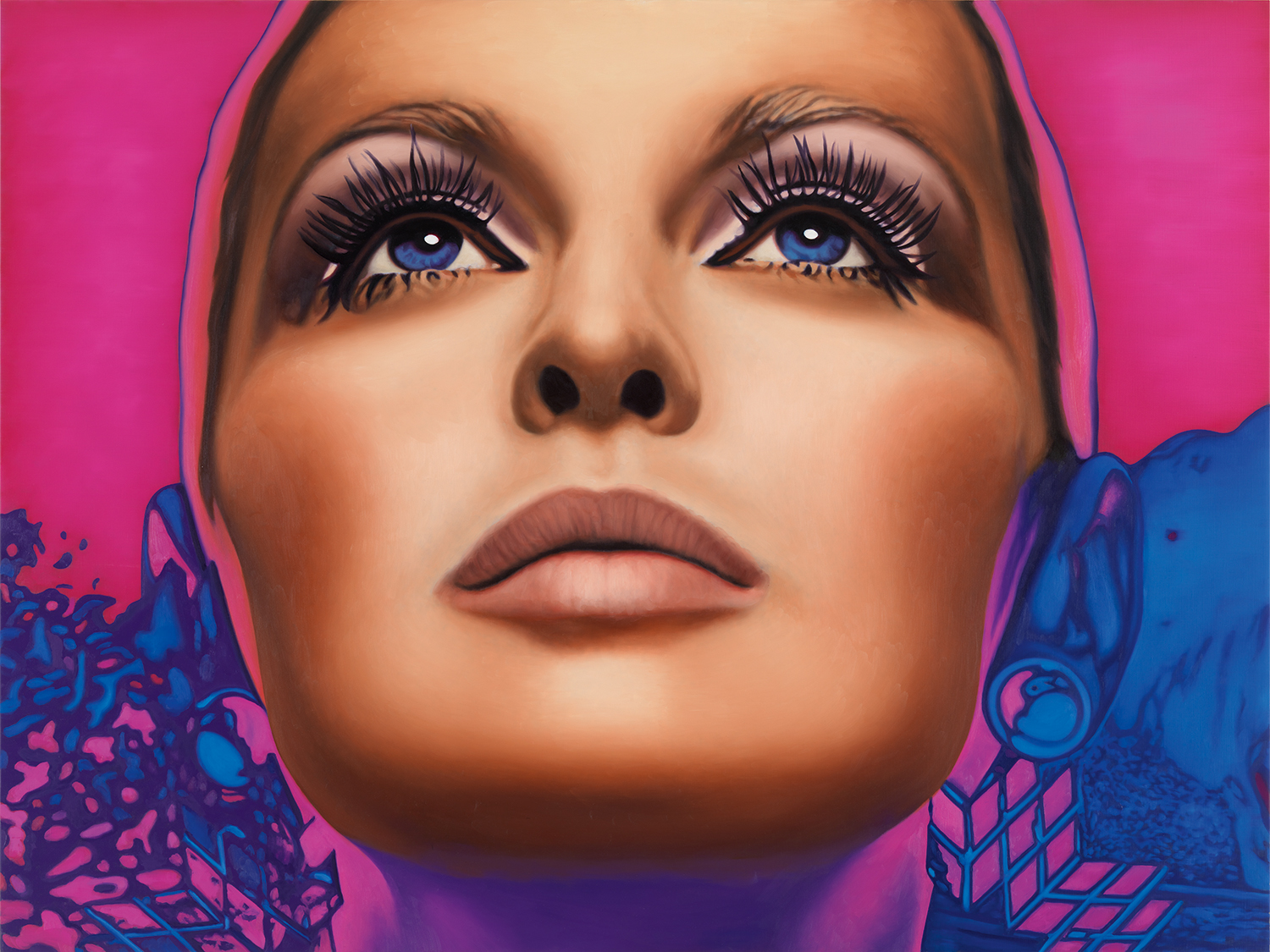 Endless, 2013, oil on canvas<br />Courtesy of the artist and Gagosian Gallery

The American painter Richard Phillips is known for his glossy, hyperrealist portraits of sometimes-controversial celebrities and iconic women drawn from found imagery. He also has an uncomfortably close relationship with pop culture, having done a cameo on Gossip Girl and collaborated with a myriad of fashion and cosmetics brands, including Jimmy Choo and MAC. Recently, Phillips — who paints with the skill of a master — has started to explore filmmaking and photography while returning to sculpture, a form through which he quickly gained recognition in the ’80s New York art world.

SABINE HELLER — Tell me about your youth.
RICHARD PHILLIPS — I grew up in the suburban Boston town of Marblehead, in the 1960s and ’70s. I’m the same age as Sally on Mad Men, to put the era into context. My father was an electrical engineer at the time, and my mother was a school librarian. My parents stayed together until I was 10, after which my mother’s father moved to our town and took up an influential role in my life. Marblehead was considered the sailing capital of the world, so yacht racing was a big part of my upbringing, as were hockey and skateboarding. I balanced sporting activities with an interest in drawing, which my grandfather taught and encouraged me to do. At that time in my life all of my grandparents were Sunday painters, which led me to thinking that I did not want to wait until I was in my ’70s to make art. I wanted to get on it right then and there.

SABINE HELLER — What were some of the other values around you?
RICHARD PHILLIPS — My values started out liberal as a member of the Unitarian Church. After my parents split, my experience took a hard turn to the right, as I was rebaptized and confirmed at the oldest and most conservative Episcopalian church in the country. At this same time I began skateboarding while the culture was in its formative years and engaged an anarchic stance alongside the now legendary editor of Thrasher magazine, Jake Phelps. In fact, skating and collecting early punk music at the local mall record shop had a greater cultural impact on me than any art experiences, as my exposure to modern art was extremely limited. Through it all, my grandfather and my mother remained very supportive and eventually I made the 45-minute journey into college, at Boston University’s College of Fine Arts.

SABINE HELLER — When do you remember first engaging your imagination with an artistic activity?
RICHARD PHILLIPS — It must have been through drawing. But instead of making imaginative or fantastical drawings I carefully copied motorcycle and hockey images out of magazines with pencil and paper. The imaginative part of the experience was more about how the drawings were visually and physically worked out beyond the source. 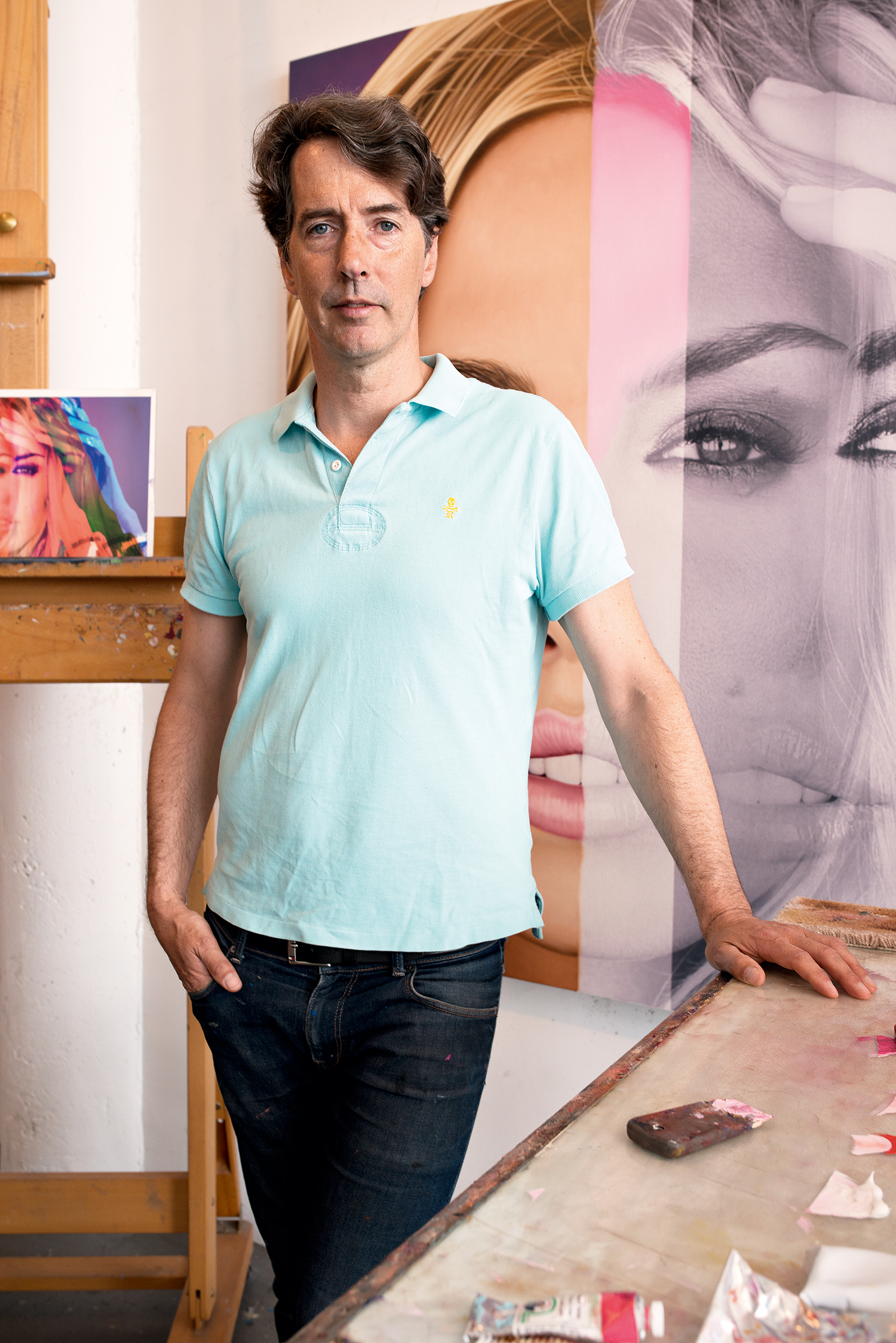 SABINE HELLER — What was the first real aesthetic choice you ever made?
RICHARD PHILLIPS — I remember drawing a swastika on the side of a motorcycle without having any idea what it meant. I was later reprimanded for doing so by my grandfather before he explained to me the meaning of the symbol. It was then I learned that aesthetics could have consequences.

SABINE HELLER — Female beauty is so important to your work. Who were the women you fantasized about at the dawn of your sexuality?
RICHARD PHILLIPS — I was terribly shy at that point in my life, so virtually all was left to fantasy. There was no shortage of beautiful girls in my school, so there was a lot to work with. A Spanish transfer student, a legitimate punk girl, and a high school English teacher all had their place in the constellation. Magazines like Playboy, Hustler, and Penthouse were heavily valued and traded. Specific models became favorites and even became drawings much later on in life.

SABINE HELLER — Did the type of women you lusted after change over time?
RICHARD PHILLIPS — After I finally began dating. Early on, a hardcore punk background was important to me because I couldn’t identify with anyone else. Sexuality tied into the music, the shows, and the ideals. As time went on my sensibility changed toward a sense of actual mystery, with brilliant original thinking and creative intelligence combined with radiant and endlessly youthful sexiness. Without a doubt there is one person who has this very rare combination: my girlfriend, the artist Josephine Meckseper!

SABINE HELLER — What is it like living with her, another successful artist?
RICHARD PHILLIPS — Josephine and I knew each other long before we began dating. I was always interested in her work and enjoyed talking with her about art whenever we met. So when we began dating it was fascinating to become aware of how her work actually developed in the run-up to her exhibitions. She exposed me to an international dimension of the art world.

SABINE HELLER — You attended Yale with Lisa Yuskavage and John Currin, who seem to have influenced each other’s work a great deal. Where did you fit in?
RICHARD PHILLIPS — At Yale I stopped painting a few weeks into the program and began making surrogates for painting, after having been exposed to ideas by artists like Jack Goldstein, Blinky Palermo, and Joseph Beuys. The seminars in the sculpture program were of great interest to me, particularly the Benjamin Buchloh lectures on Beuys and the visiting artist program with Vito Acconci. John and Lisa were more part of the “painters” contingent at Yale. I respected them both and certainly followed their work, but in the end, it seemed caught up in traditions that seemed dated. As time went on I did hang out with John more, and he opened up my mind to the surprising insurgent potential of painting, initiated by its nearly blind acceptance as art no matter what you did with it. 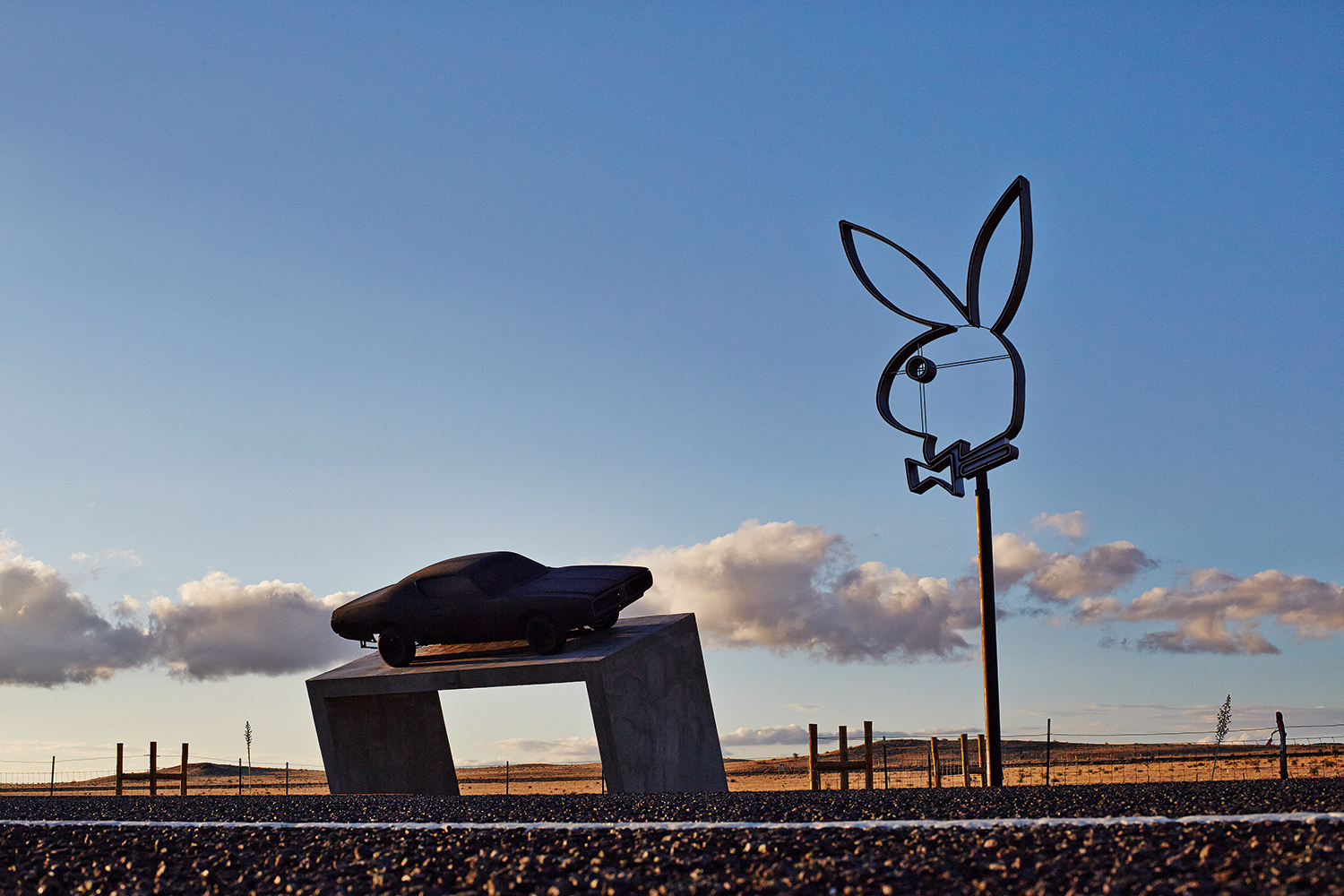 SABINE HELLER — So much of your work is focused on fame.
RICHARD PHILLIPS — My work has, at times, pointed toward both sides of the production of imagery that relates to the maintenance of a substantial position in the media. The space of media surrounding art is contestable and often overlooked. The tools for engaging with this space are available to be used just like a brush or a tube of paint. When considering the total possibility of communicating one’s art, there is an important decision to be made as to whether one chooses to be passively or actively engaged. I have chosen not to overlook this area.

SABINE HELLER — You’re exceedingly clever and well-versed in the language of academia — it feels like you enjoy both the bucking of convention and the experience of explaining and at times justifying your choices.
RICHARD PHILLIPS — The language of academia surrounding art is necessary for institutions to be able to speak to one another and to guarantee their own existence. It is a rarefied and specialized form of communication. There is also no inherent truth to it, and its status as fiction makes it malleable to suit ever-changing agendas. There is no stability of convention to be bucked, as it is just a matter of securing a consensus for competing ideals. Opening up a dialogue about these conflicts or contradictions for which there is no need for resolution is important in that it expands creative possibilities unchained from reason.

SABINE HELLER — All of your subjects seem to be more persona than person. How do you go about choosing them? Why did you seek out Lindsay Lohan, for example?
RICHARD PHILLIPS — The individuals I collaborated with in my recent body of work do have personas that foreground their presence in the broader cultural sense, which could create the impression that they were selected and then sought after. The opposite was true in each case. With Lindsay Lohan, I had been asked to create a painting for “TWO x TWO,” the philanthropic event held in Dallas. At the time, I was working on my exhibition for White Cube titled “Most Wanted,” which involved paintings of composites of young actors and musicians paired with step-and-repeat brand backgrounds. In the news at that time, Lindsay was going through her court appearances, and the imagery was heavily present in the media. One image in particular stood out to me in that it went far beyond recording the moment. It seemed to have qualities that I had seen before in Edvard Munch paintings, and I felt that it would be a good basis to begin a portrait. The end result was my painting titled Red, Blonde, and Blue. A friend of mine saw the painting and kept the image as a screen saver on his phone. While working on a photo shoot with Lindsay in Los Angeles, he showed her the image and suggested we work together. After the shoot he put us in touch, and we began to discuss ideas, and it evolved from there.

SABINE HELLER — I know you publicly maintain that Lindsay wasn’t a muse, but honestly it feels like you’re taking an ideological stance on that issue. Where exactly did her agency lie?
RICHARD PHILLIPS — I understand what you mean, but it really wasn’t an ideological stance. Her agency began with her agreement to work together and followed through each stage of our collaboration. We discussed the format, the range of imagery, and the wardrobe, as well as inspirations. For example, in the first film, I knew that Lindsay was, at the time, very inspired by the work of Brigitte Bardot, so Godard’s Contempt became a logical point of departure. At the same time, I was interested in the imagery of Ingmar Bergman’s Persona, which likewise seemed a good fit in terms of what we were planning for the shoot. As this was my first film of any kind, I learned a lot from Lindsay’s professional experience and that of my co-director, Taylor Steele, in terms of how to proceed to create the motion portrait we were all working toward.

SABINE HELLER — You once said, “You need celebrity endorsement and luxury sponsorship,” when speaking about making it in today’s art market. Is that really true? And if so, do you find it sad?
RICHARD PHILLIPS — It has not always been this way but has evolved to this state by the eventual acknowledgement of the reality of market conditions and pressures that need to be addressed transparently and efficiently. Whereas previous conditions permitted the obfuscation of the background operations of dealers, collectors, patrons, and museum trustees, these same actors now take activist roles in all areas of the market where, for example, curators double as art advisors and celebrity wranglers who have the ability to attract and consolidate power and value by determining who is written into the cannon and which sponsors will be invited to be affiliated with these trajectories. I do not find it sad. On the contrary, I support the removal of the false barriers and pretense surrounding art and feel that all areas should be made accessible in an open and unregulated market system.

SABINE HELLER — I’d love to hear about what you’re working on right now.
RICHARD PHILLIPS — I am working on two sculptural projects. One is a collaboration with Playboy in Marfa involving a concrete plinth, a blacked-out ’72 Dodge Charger, and a 40-foot-high neon Playboy Bunny sign. The installation piece serves as a launching point for a further work with Playboy that involves the creation of an entirely newly imagined and built out ’72 Charger that has been optimized in terms of aesthetic and functional power. The other project is a kinetic sculpture involving another corporation, which provides a new pallet of forms, traditions, engineering, and passions. The project is titled Cayman RSR and involves the complete construction and engineering of a Porsche Cayman race car based on competing ideologies within the corporate hierarchies embedded in the company’s history. As a kinetic sculpture, it’s made to explore the outer limits of physical performance.