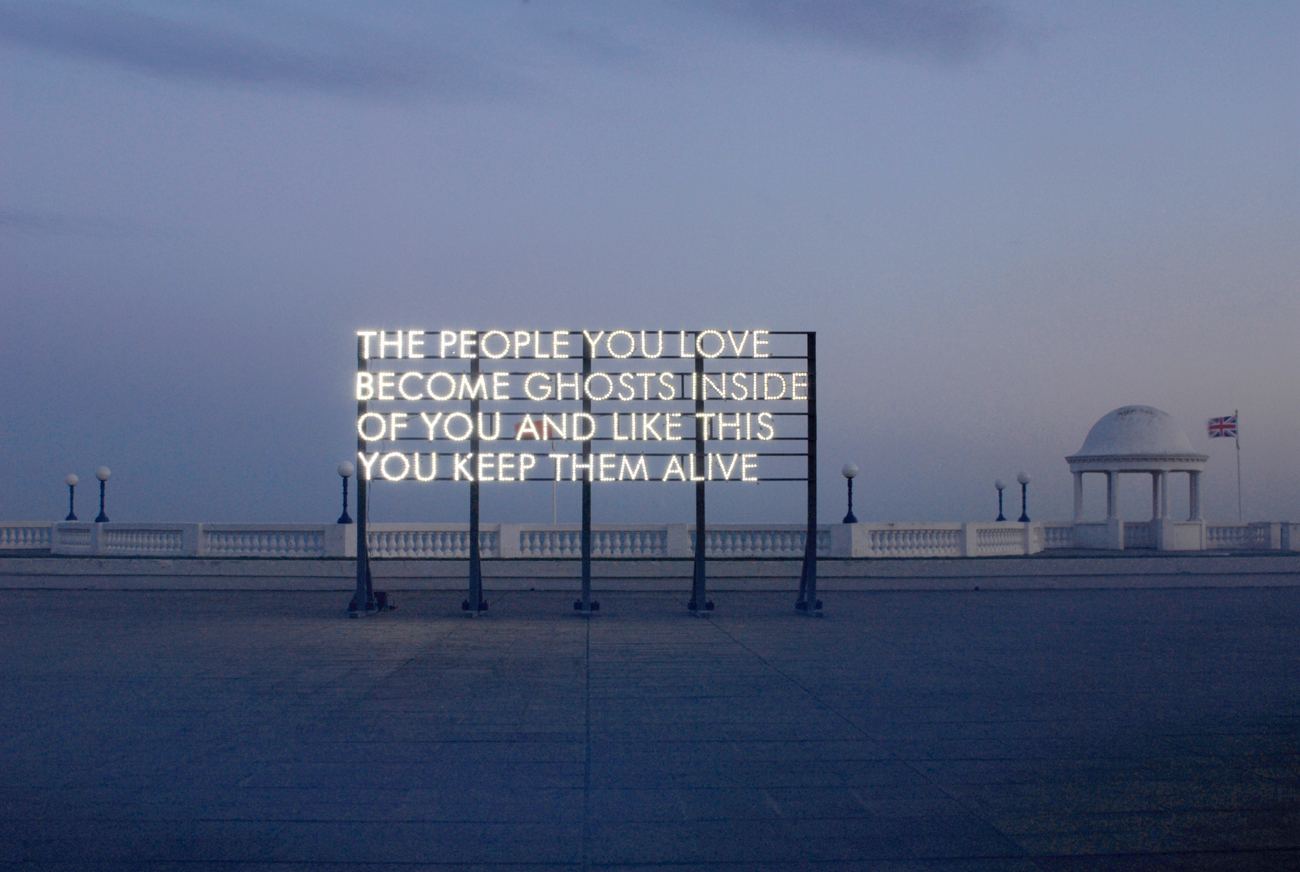 The People You Love Become Ghosts Inside of You. recycled sunlight poem, installed at the De La Warr Pavilion, 2010

about his poetic / political art

I started making billboards in Edinburgh and Glasgow back in 1994, when I was a student. Guy Debord inspired a language for which ideology and poetry were inseparable. Some of my billboards are anti-Capitalist and overtly political, such as THE SPECTACLE OF ADVERTISING. Some are Romantic and personal, like MEMORIES OF MEDITERRANEAN FLOWERS IN THE STREETS OF NEW YORK. But they all have a pathos and melancholy in their underlying tones. I want to bring pathos and melancholy to the street, on billboards normally used to sell Tommy Hilfiger Jeans and Nespresso coffeemakers in a tone of voice at once upbeat and vacuous. 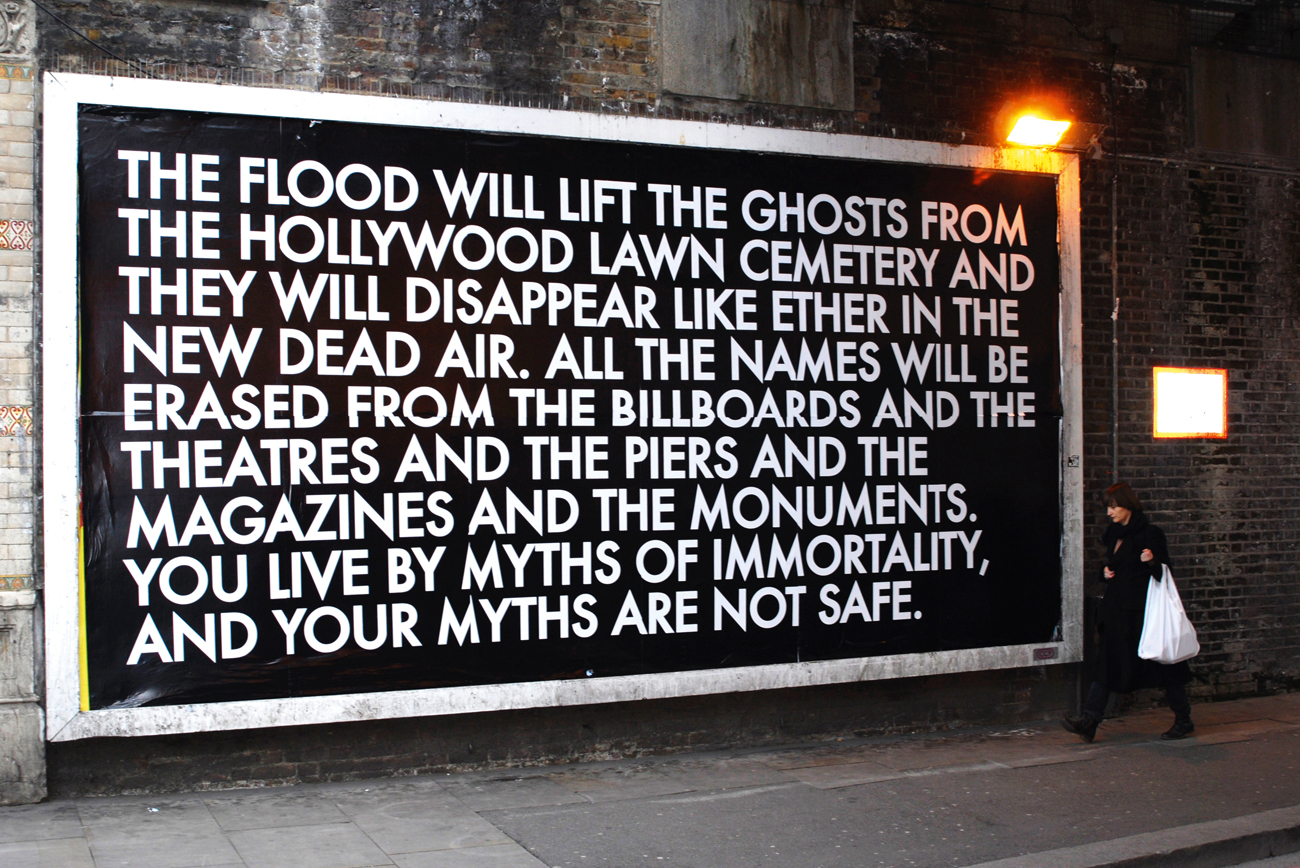 I don’t quote rock song lyrics to make contemporary art pieces, something that is very fashionable these days. All the words are mine. My influences are Guy Debord, Jenny Holzer, John Ashbery, and northern English poets from the 1950s, like Philip Larkin and Ted Hughes. I write as honestly as I can, making straight pictures about the contemporary world, about its melancholy, and about what it feels like to be alive now. I’m working in the same platform medium — billboards — as Jenny Holzer, and in the same tradition of conceptual text art as Lawrence Weiner. 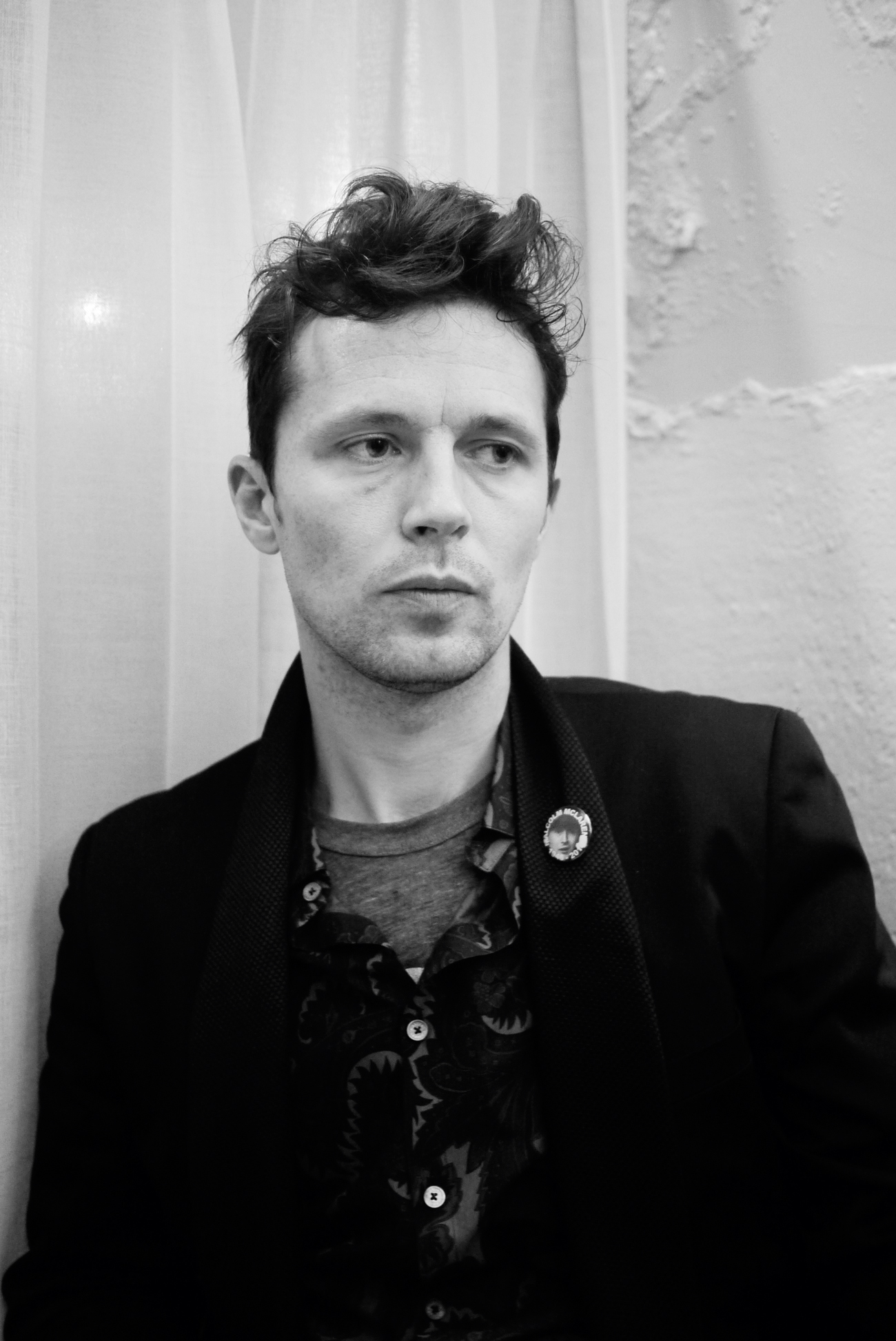 British poets like Larkin and Hughes had a kind of bleak Romantic modernism, which I feel connected to. I grew up in the 1980s in a very bleak part of northern Britain, so when I was 15 their voices already resonated with me. I subconsciously write like them. Instead of using rhyme, they used rhythm based on the repetition of vowel sounds, which I think echoes the Celtic influence in the local accents of people in northern England, and in Scotland and Ireland. I probably write in a half-Celtic/half-American English, which is also the voice I think with. I love the American poets, John Ashbery, especially for his poem “So Many Lives” from his book, A Wave, and Raymond Carver, especially for his last collection, A New Path to the Waterfall. Two French poets who are very important to me are Jacques Dupin, with his poems about water and rocks, and Andre Breton.

When I was in art school in Scotland, and showing at Transmission Gallery and such places, I felt that my generation might be falling into the trap of repeating the codes and forms of conceptual art, without an ideological critique or the spiritual, political engagement of someone like Josef Beuys. I used to want Lawrence Weiner to tell the truth about what he was really feeling. So I went back to Guy Debord’s writings, where I found a language that was both political and poetic.

I gave a lecture on my work at Goldsmiths last spring and I showed 20 slides: 10 of sentences from The Society of the Spectacle by Debord and 10 of my billboard campaigns from 2010. When you’re on Sunset Boulevard and you see a line from Debord next to a billboard for an iPad, you get a glimpse into how Debord imagined the future.

The important thing for me is to situate poems in the street for ordinary people — people who don’t have an art education or even know what art is.