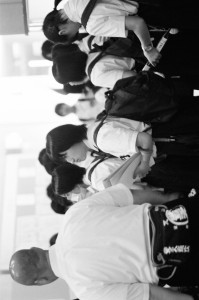 A school field trip to the hamaoka nuclear plant, 2011

about the japanese nuclear crisis

The day after giving a lecture at Nagoya University of the Arts, on May 31, 2011, I took a bullet train from Nagoya station to Kakegawa station, where a fisherman named Mr. Shimizu was waiting to pick me up and to drive me to Omaezaki and the Hamaoka Nuclear Plant. Located in a city of 35,000 inhabitants, the nuclear power station was built on the sands above the most active seismic fault in the country, and 25% of the earthquakes in the world occur in Japan. The Hamaoka Nuclear Plant was known as the most dangerous one in the world.

At the request of Prime Minister Kan, and by order of the US Government, all reactors at the Hamaoka Nuclear Plant were shut down on nuclear bomb. In November 1943 a graphite-moderated reactor was built in Oak Ridge, Tennessee. This marked the establishment of the nuclear industry in the US. During the Eisenhower era of the ’50s the nuclear technology industry began generating electricity, calling it a “peaceful usage” of nuclear power.

The Hamaoka Nuclear Plant was built by Toshiba. Westinghouse, the company that manufactured the atomic bomb, “Fat Man,” in 1945, was purchased by Toshiba in 2006. Nuclear plants and the nuclear industry have long been deeply connected to the military-industrial complex, and the spent fuel from the Japanese nuclear plants is used for warheads of depleted uranium bombs, which are manufactured in the US, and which have been used to bomb Iraq, Afghanistan, and Libya.

On June 2nd, during another rainy morning, before catching a bullet train to Tokyo, I decided to stop by the Hamaoka Nuclear Plant, which was just around the corner from my hotel. In the middle of the nuclear plant’s compound there was a visitors’ center, which offered information about the necessity of nuclear energy for the future of mankind. There were buses parked next to the visitors’ center. Many nuclear plant technicians and workers were walking around the center. Hundreds of young kids around 12- and 13-years-old were being lectured by young female employees about why nuclear plants are safe and important in saving the earth because they reduced carbon dioxide levels. I was shocked to witness the scene, as the Hamaoka Plant accident occurred just a little over two weeks before that, and hundreds of workers were trying to repair the plant.
I asked a teacher where they were from, and she told me they were from a junior high school in Okazaki, Aichi Prefecture, just next to Nagoya.

This past April 26, the 25th anniversary of the accident at Chernobyl, I met a US nuclear plant technician from the Ukraine Institute in New York. The technician had been sent to Chernobyl and Kashiwazaki, and was sent from New York to Fukushima Daiichi on the day the earthquake happened. I was told that nuclear plant technicians from all over the world were currently working to save the planet.

The outlook is not at all promising after this, the most disastrous nuclear plant accident in history. No one can stop the radiation leakage at the plant. On June 6th, the US nuclear industry unveiled a new organizational structure to integrate and coordinate activities of the ongoing response to the Fukushima Daiichi accident of March 11th. General Electric Mark I, the reactor at the Fukushima Daiichi nuclear plant is suspected of being defective. Similar reactors are currently in operation at 23 locations across the US.

According to Kazuhiro Haraguchi, a congressman who is an ex-Minister of Internal Affairs and Communications in Japan, the accident at Hamaoka Nuclear Plant on May 15th was a hydrogen explosion, because of which radiation in the area still remains at a high level — including that in the tea gardens and in Nagoya-city.