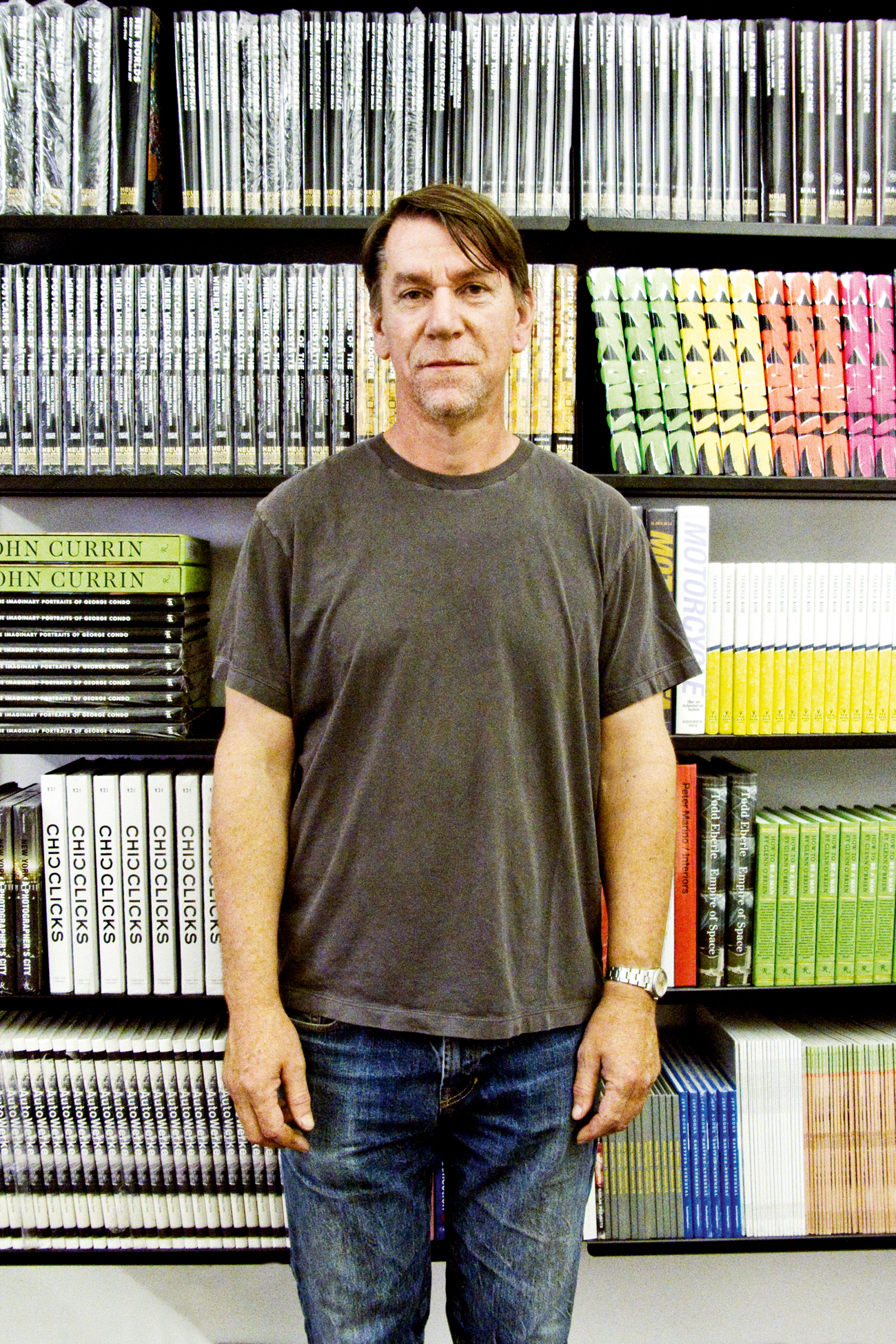 Richard Pandiscio is one of the few people I would describe as being princely. He has art-directed magazines, designed books, created ad campaigns, and in recent years he’s been involved in real estate projects that engage serious architects. I recently had the good luck to have my book, How to Be a Man, produced by my dream publisher, Rizzoli. When they asked me whom I wanted to design and illustrate it, I chose Richard Pandiscio and Jean-Philippe Delhomme, because I knew that Richard would make a book that was classical and modern, and elegant and witty  — one that would call to you from across a bookstore, yet be eminently readable. We’re neighbors in a small Connecticut town that has two modernist houses — one is owned by Richard Pandiscio and Todd Eberle, the other by my wife Gina and myself. I managed to catch Richard at home at the height of the gardening season.

GLENN O’BRIEN — How did you become a designer?
RICHARD PANDISCIO — By chance. My first job out of school was secretary to the creative director of House and Garden, a wonderful guy named Lloyd Ziff. One of his designers had quit and it was my job to find candidates. Months later Lloyd still hadn’t found anyone, so I offered myself. I had absolutely no qualifications, but I’m a quick study. Two years later I was made the first art director of Condé Nast Traveler. Later I was moved to Vogue.

GLENN O’BRIEN — Were you a magazine addict as a kid?
RICHARD PANDISCIO — My father was a salesman, a devout Catholic, and a tyrant. He ridiculed me for reading my mother’s magazines — Look, Life, Better Homes and Gardens, and Harper’s Bazaar. But in retrospect, the best work I’ve done has elements that are at odds, maybe because of the different lives I’d led as a kid, the one I enjoyed when my father was on the road and the life of terror when he was home. He was in a serious car accident outside of Tokyo and while he was still recuperating, in Japan, I secretly applied to boarding schools and I left home for good. The school I attended was rigorous and dour, but one of the students had a subscription to Andy Warhol’s Interview, and life didn’t seem so grim.

GLENN O’BRIEN — What was it like working for Tibor Kalman?
RICHARD PANDISCIO — Every night for about five years after working at Condé Nast I’d take the subway downtown to Canal Street to design Paper magazine. We did the layouts on the editor’s round kitchen table in one shot: text, display copy, and photographs to size, assembled with adhesive spray and scotch tape. That led to some bizarre typographic solutions, which caught Tibor’s attention. So, before he left for Italy to begin working for Benetton, he hired me as his replacement as creative director of Interview. We shared an office for about six months. I also worked with him on the first few issues of Colors, and on his exhibition design of the Keith Haring show at the Whitney Museum. He was a truly great provocateur, and I was lucky to have known him.

GLENN O’BRIEN — Any other bosses who were also mentors?
RICHARD PANDISCIO — Harold Evans, Kim Hastreiter, Alexander Liberman, and Ingrid Sischy were all incredibly dynamic bosses in terms of how to run a business, and how — and how not — to lead a team of talented people.

GLENN O’BRIEN — A truly incredible list of artists, clients, and projects flashes by on your website: Jean Nouvel, Herzog & de Meuron, Fendi, Cipriani, Peter Marino, John Currin, Julian Schnabel, Terence Koh, Francesco Vezzoli, George Condo, DIA, Stephen Sprouse, Ralph Lauren, Panerai, Harmony Korine, Francis Ford Coppola, James Franco, BMW. Who were your
most interesting or challenging clients?
RICHARD PANDISCIO — All good clients are challenging, but some are more pleasant. The movie producer Cary Woods was one of the most interesting and most fearless. The New York Historical Society just asked me to design the complete original works of John James Audubon, their first new book on Audubon in 60 years. Angelika Taschen requested for me to brand her new publishing company. We’ve just designed Peter Doig’s monograph and are branding a new hotel in Chelsea, The Hotel Americano. All those were dream jobs. Working for LVMH was a challenge. When they purchased Phillips Auctioneers we were part of the re-branding, which was a clash of two completely different corporate cultures.

GLENN O’BRIEN — What would you like to do that you haven’t done?
RICHARD PANDISCIO — This is going to sound boring: a bank. Why does banking really have to be such a miserable visual experience?

GLENN O’BRIEN — What work are you most proud of or most amazed by?
RICHARD PANDISCIO — At Interview, the staff and budget were so small that I reviewed the fashion collections in New York, Paris, and Milan myself. I loved making visual how-to stories. And I loved having Bruce Weber shoot first-time novelists at Truman Capote’s old house. I’m also proud that I’ve always championed underdogs, and that I’ve helped open the door for good architects to do good work. But honestly, I’m amazed that I get so much work. I’m verbally clumsy and I don’t present well. I’m amazed that the studio seems to do best when we do a category of work we’ve never done before. The first film titling and poster work I ever did, for Harmony Korine’s Gummo, won the design award at Cannes. We won the James Beard Award for The Standard Grill, the first major restaurant work we ever did. Right now I’m doing a lot of work branding things that were about a sense of place: J. Crew’s first retail stores; Andre Balazs’ new-old hotel in Miami, The Raleigh; Ronald Lauder’s museum, The Neue Galerie for German and Austrian Art. When I first started working with architects and developers, New York was flush with cash and there was a desire to combine art and luxury real estate. One weekend, on a lark, I wrote a proposal to create a magazine that would cover this new culture of real estate, which Adam Moss at New York Magazine, turned into Vu. So early on I had a voice in shaping how people perceived the industry, which was in a period of explosive growth.

GLENN O’BRIEN — How is selling a building different from selling perfume or cars or jeans?
RICHARD PANDISCIO — They’re both about selling a fantasy, but a new building has to be sold before it’s built, for a commitment of $3 to $30 million before the purchaser can even see the product.

GLENN O’BRIEN — Do you have a graphic design and book design philosophy?
RICHARD PANDISCIO — Most of the books I’ve designed are artists’ monographs. For them I have two obligations: to protect the artist from the publisher’s worst commercial instincts and to get out of the way of the art. Graphic design is one tool in the arsenal of effective communication. Kate Betts, an editor at Harper’s Bazaar, once labeled me “annoyingly conceptual,” which I took it as a backhanded compliment, because to communicate really well you need to be a little bit irritating. Otherwise no one will notice you.

GLENN O’BRIEN — You have an amazing garden.
RICHARD PANDISCIO — There’s something sexy about gardening, and trying to control something that resists being controlled. Your efforts won’t endure. But every once in a while your labor can pay off, and that moment it can be perfect.