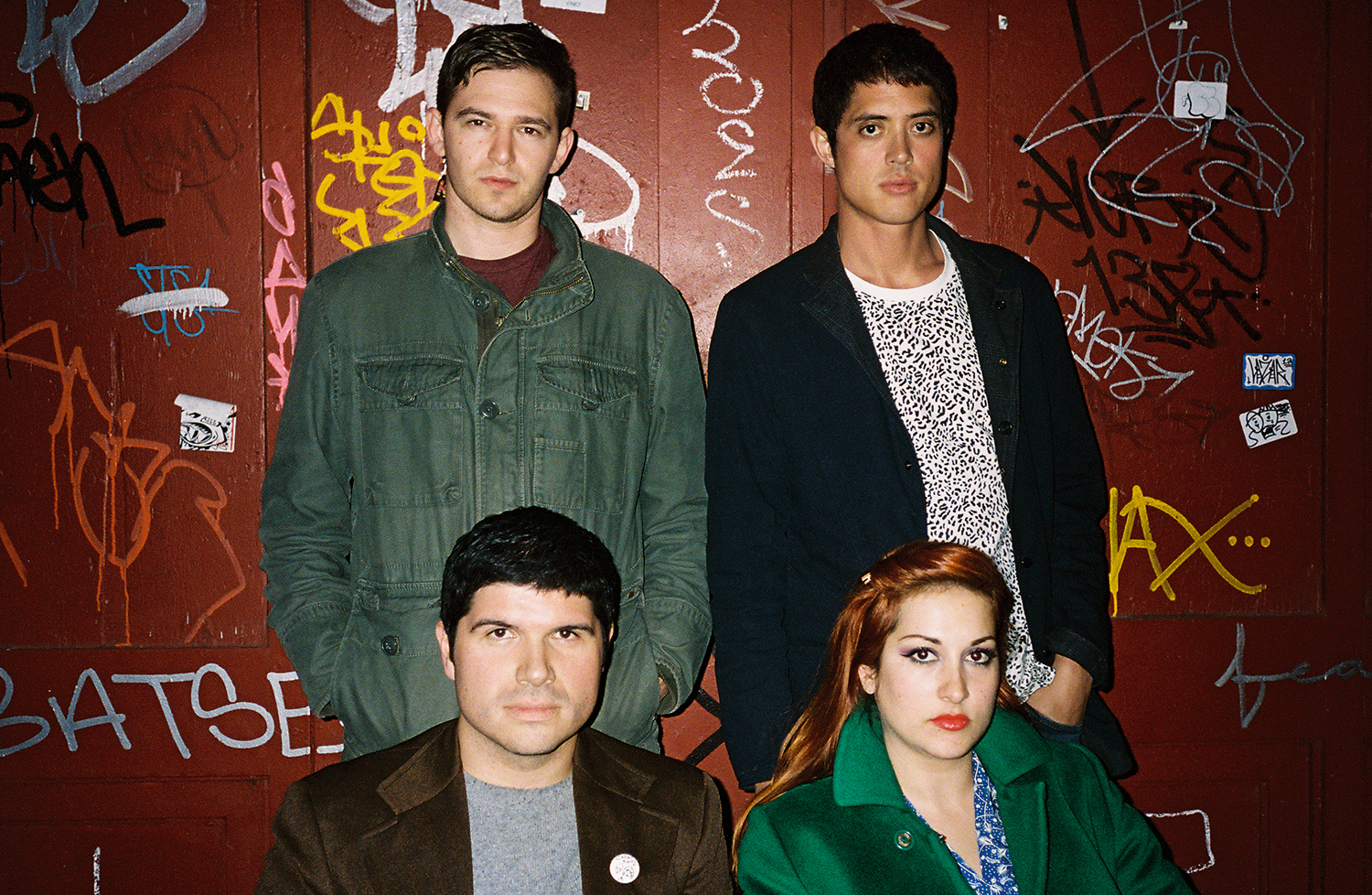 Midnight Magic is a gritty NYC band that plays an unapologetic mix of disco, funk, and house with live instruments, including a three-piece horn section. Under the horror-film-obsessed eye of lead singer Tiffany Roth, it has come to be a Brooklyn club staple and an up-and-coming international force. My band Holy Ghost! recently had the pleasure of touring with them around the USA. Full disclosure, I’ve known Andrew (bass) and Morgan (keys) since I was a teenager, but I couldn’t be less jaded about them: they’re a spooky gust of fresh air.

ALEX FRANKEL — It’s a question no musician likes to answer, but what do you sound like for someone who has never heard the band?
MIDNIGHT MAGIC — I think you should answer that.

ALEX FRANKEL — Can we say Midnight Magic is essentially a disco band?
MIDNIGHT MAGIC — We don’t like to say that.

ALEX FRANKEL — I like to call it campy horror disco. A B-movie elevated by incredible musicians.
MIDNIGHT MAGIC — We understand why you would say that about us. We maintain that we combine soul, funk, and an element of the psychedelic, which is a big part of our ethos.

ALEX FRANKEL — Is there something about disco that rubs you the wrong way?
MIDNIGHT MAGIC — It just makes us appear as part of a trend. It’s like calling us grunge. It doesn’t mean anything. The band Bush was not grunge, it was pop. Midnight Magic is not disco, we’re pop. We’re like the Bush of disco.

ALEX FRANKEL — To me, pop music can be looked at as a camp genre. Can you talk about the relationship between working within a genre and subverting it at the same time? How do you walk the line between something that can be fun without being too much of a joke?
MIDNIGHT MAGIC — A lot of that has to do with our singer Tiffany. If it was done with any other person, it would be a little like jumping the shark. Tiffany seems very sincere in her embrace of the irreverent. It’s part of who she is. It’s not a joke. It is a real love for what goes into the music. It’s like a campy horror movie in the sense that when you step back, there might be a comic defect, but so much love and creativity goes into it. We feel really strongly about the music and are not making any jokes during a performance.

ALEX FRANKEL — Midnight Magic for me is a very New York band. But half of you are from the West Coast. Why New York and not LA?
MIDNIGHT MAGIC — New York is where it’s at for music, absolutely.

ALEX FRANKEL — Morgan, do you feel it’s a better place?
MIDNIGHT MAGIC — Yes, when I was on the West Coast, I didn’t feel like I had a home there, and I definitely didn’t feel like I was meeting people who were ready to experiment the way I wanted to. There were a lot of psychedelic folk going around who I didn’t relate to. I respect it, but I didn’t feel it.

ALEX FRANKEL — Tiffany, you treat Midnight Magic performances a little like theater productions. Can you talk about your theater background and how it is related to the band performances?
MIDNIGHT MAGIC — I did major in theater for the two years I was in college, so it is a part of my background and something I use when I feel the most embarrassed onstage.

ALEX FRANKEL — Morgan, I would say you play the piano like it’s a drum.
MIDNIGHT MAGIC — The piano is a percussion instrument. Playing piano like a drum is important. For any instrument, the rhythm comes first. The rhythm is the melody. Charlie Parker came up with that one.

ALEX FRANKEL — Do you guys like to play at midnight?
MIDNIGHT MAGIC — Absolutely, it’s our favorite. We could also be 10:45 Magic, I guess.

ALEX FRANKEL — “Beam Me Up” was a pretty big hit for your band. It must have been an international passport for you to travel. What places has your music taken you?
MIDNIGHT MAGIC — Estonia, Kazakhstan, Russia many times.

ALEX FRANKEL — What were you doing in Kazakhstan?
MIDNIGHT MAGIC — Opening and closing for Macy Gray.

ALEX FRANKEL — The economy of touring is really difficult to navigate — in some ways it would benefit a band only to play shows that make money. Why did you go on tour with Holy Ghost!?
MIDNIGHT MAGIC — Well first, we love you. And secondly, why not? I think our bands are a really good match.

ALEX FRANKEL — It’s definitely my favorite match.
MIDNIGHT MAGIC — Ours, too. When we opened up for Washed Out and Cut Copy, it was so different. I didn’t understand what audience members were thinking. What is this crazy woman doing onstage, and then Washed Out’s chillwave comes on after.

ALEX FRANKEL — Watching Midnight Magic live, I find that Tiffany is able to pull off something that I hate in every other band: the antagonistic front person. But when you do it onstage I love it.
MIDNIGHT MAGIC — It’s very personal. The band is giving 110 percent, and as the lead singer I feel like the conduit for that energy. We are giving everything.

ALEX FRANKEL — You say that without sounding bitter or entitled.
MIDNIGHT MAGIC — We’re still optimistic and humble and we love what we’re doing. We’ve played with other bands where the females can be construed as bitches. It’s a pleasure and an honor to perform, and you don’t take that for granted. Every show is important. I do take it personally, however, when I see an audience member standing there with their arms crossed and a frown on their face, like, “Why are you here, and how did you get to perform at this venue?” In NYC you have to develop a thicker skin, because it seems like everyone is in a band.