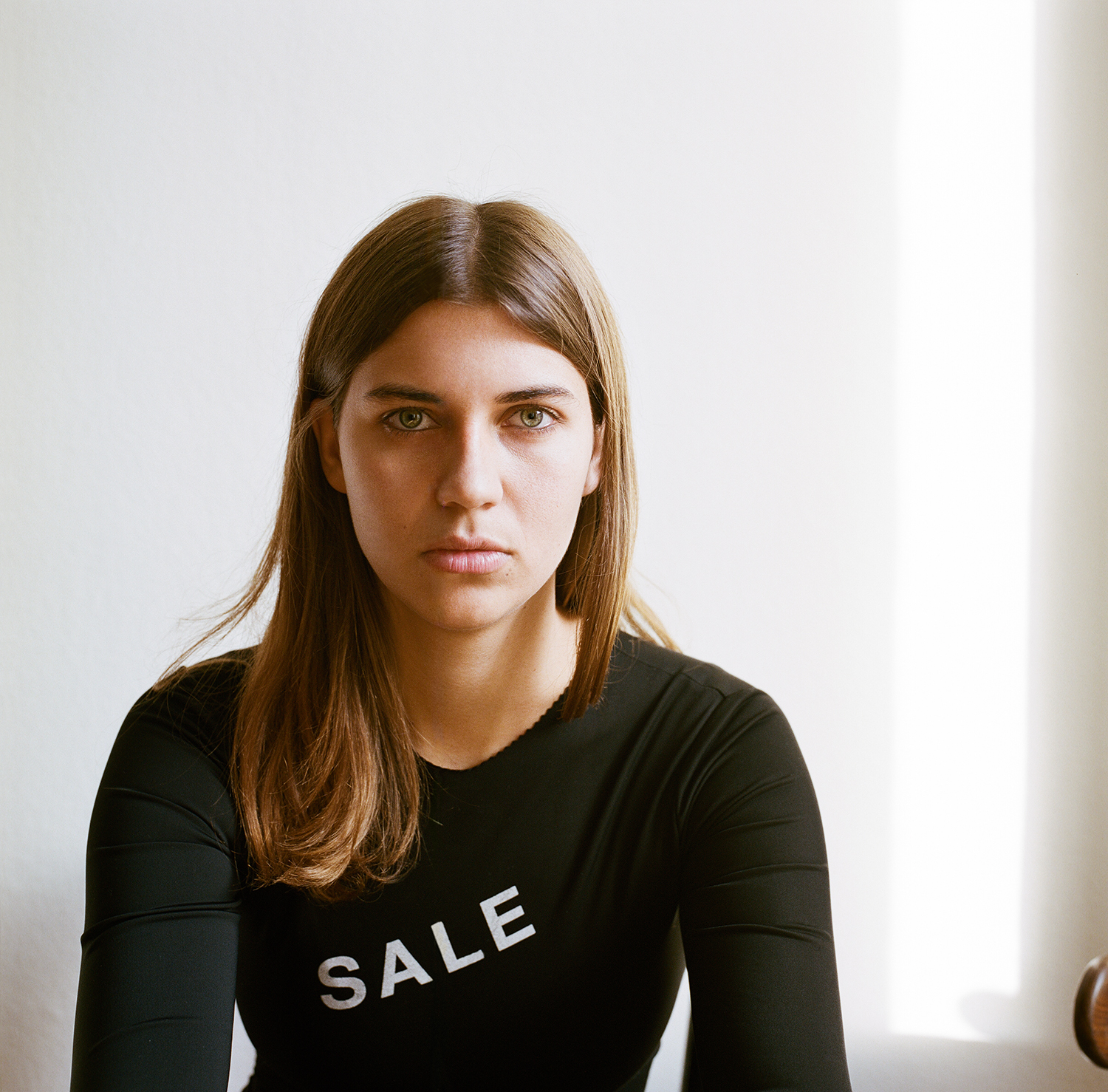 Quantum physicist David Deutsch describes the “fabric of reality” as a composition of parallel realities. Anna-Sophie Berger’s parallel realities include being a multimedia artist, fashion designer, and photographer. Like many of her contemporaries, her work has been described as a “mediated nomadism.” While still a student at the University of Applied Arts in Vienna, she began engaging in art and fashion using Internet images. Her graduate collection “Fashion Is Fast” dealt with fashion, garments, body relationships, and website sociology.

ANNABEL FERNANDES — In addition to your fashion studies, you’ve studied Transmedia Art in Vienna. Has this had an impact on your practice?
ANNA-SOPHIE BERGER — I studied with Brigitte Kowanz, whose Transmedia Art class was like a think tank. Brigitte was the first authority from the fine arts to encourage me and to help me understand that my work was both art and fashion and that I didn’t have to repackage it for commerce or make it readable for people in fine art. In the class I developed a performance called Modeanweisung [fashion instructions]. It was staged with ordinary people in ordinary clothes. Later I combined it with fashion. For my diploma I merged performance and garments into one coherent piece.

ANNABEL FERNANDES — How did you become an artist?
ANNA-SOPHIE BERGER — A year before graduating, I had my first show at JTT Gallery in New York City. It was a show organized by Zak Kitnick, a New York-based artist who’d found my work online — which is curious enough, but happening more and more. We started communicating, and finally he asked me to be part of the show in New York. It was very important because it encouraged me, even for my diploma, to go all out with my conceptual ideas. Then came my diploma. From that experience I learned that it wasn’t so important whether I was an artist or a designer; more important was the approach as a transmedia practice. If I design a shoe, it’s a conceptual process. One can argue whether it’s fashion or art, but that doesn’t make much difference. It’s more about where it will be presented and, of course, the price. 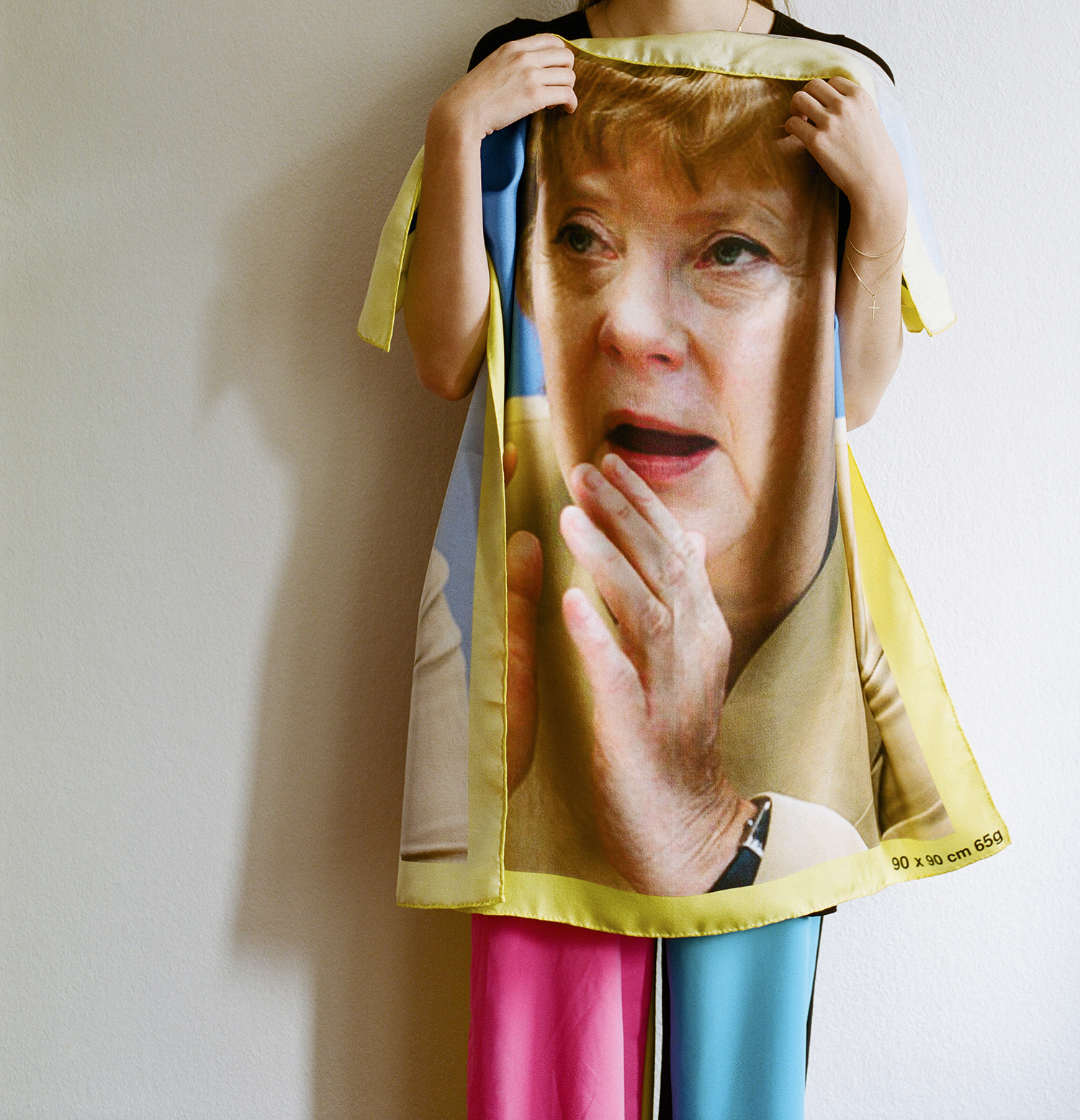 ANNABEL FERNANDES — At the JTT Gallery exhibition, you showed the same thing in three different forms: photographically, as an art piece, and as a fashion object. Will it still be wearable?
ANNA-SOPHIE BERGER — Being wearable or not doesn’t determine if it’s fashion or art. It can be both. It’s a difficult discussion, and one that I have about once a week. The only real distinction is the market. How many of those will I be producing? Am I aiming to distribute them on a large scale? Will there be a commercial production? Art Dealer Margaret Lee bought one of my framed photographic prints and a piece, a dress, which she wore to the Frieze Art Fair in New York. In the press release Zak wrote very early on, before I could even put anything into words, he described my work as being nomadic via sites. That better describes what I’m doing than the question of whether I’m a designer or an artist. Margaret Lee found the context and idea interesting, and wore the dress to the fair, then was style-blogged, which in itself shows how close the two are. Despite their distinct differences, this happened.

ANNABEL FERNANDES — You’re selling Fashion Is Fast t-shirts online. How did that come about?
ANNA-SOPHIE BERGER — I made the t-shirt for my team, an overstylized crowd. I liked the idea of establishing one highly commercial project. It was exactly when I was thinking about what to do with the immense press response to my collection, and the fact that people are emailing me to stock this collection. I didn’t have the means. I was confused, but also interested in the concept of a cheap commercial product that has no other feature than my name and the catchphrase Fashion Is Fast, which refers to my body of work. I really like it. I’m not afraid to tackle commercial concepts. I think it’s subversive to the idea of branding that someone who barely knows me would look at my website or Tumblr and purchase an item with my name on it.

ANNABEL FERNANDES — Douglas Coupland has written about the “Diamond Generation” and the “89plus” consciousness of the Internet and Tumblr. You were born in 1989.
ANNA-SOPHIE BERGER — Yes. I went to the 89plus Serpentine Marathon! It was great. That was where I belonged. All the rules about which cognitive art form you do are less important. There are new rules. I’m an Internet child.

ANNABEL FERNANDES — How did the Condoleezza Rice and Angela Merkel scarfs from your Fashion Is Fast collection come about?
ANNA-SOPHIE BERGER — Researching on the Internet 24/7, I got interested in well-known figures, which led me to a fashion conversation about Angela Merkel, who’s considered horribly unfashionable. I was very attracted to and interested in her politics. So I created a suit that mirrored details of her wardrobe. Then I needed another female politician to counteract her. I started with Hillary Clinton, who was too similar, Yulia Tymoshenko, who wasn’t enough contrast, and ended up with Condoleezza Rice, because there was a lot about her: getting up at 5am, lean, working out, strict. I juxtaposed the two in suits that had very different patterns. I made the fan scarfs. I thought it would be nice to caricature politicians who weren’t media heroes. Some reactions from the US involved a question of race. To me, Condoleezza was simply an African-American politician. I was interested in images of female power in the public domain. 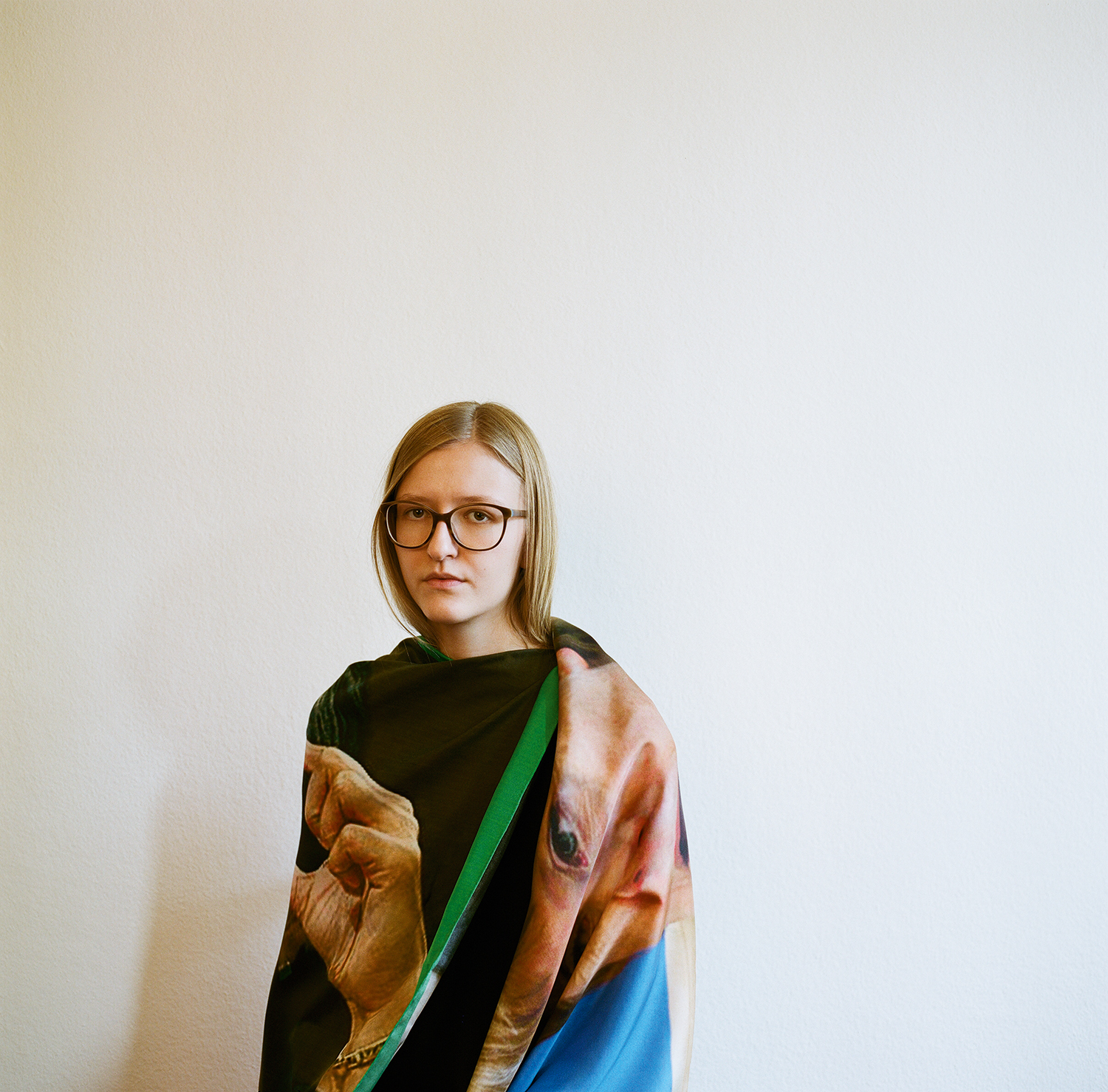 ANNABEL FERNANDES — Can you also tell us about your project Ohne Ohne?
ANNA-SOPHIE BERGER — Together with my friend Katarina Šoškic, and back then with Roshi Porkar, we developed the website Ohne Ohne, meaning “Without Without.” We wanted to implement a break with the habit of the online consumer who simply scrolls quickly through content. The first step is you give something, whatever you want. But we urge giving away something before consuming. Then you arrive at a selection from all the user uploads. It’s like a record of the given interests of those users, which changes every time you reload it, so every time you see different combinations of completely random content. Right now we are working on the next level of the website.We are entering the virtual state of editing and the new surface for that will go online soon. This digital editing process will be once again defined by the users and lead to the printed publication.

ANNABEL FERNANDES — So do you see yourself as an artist?
ANNA-SOPHIE BERGER — Yes. My works are sold and perceived in an art context. Ideas are the most important for me, and this seems to be more fitting in the art context. If that comes at a higher price range with less accessibility, then I’ll take that risk in order to define my own pace of work.