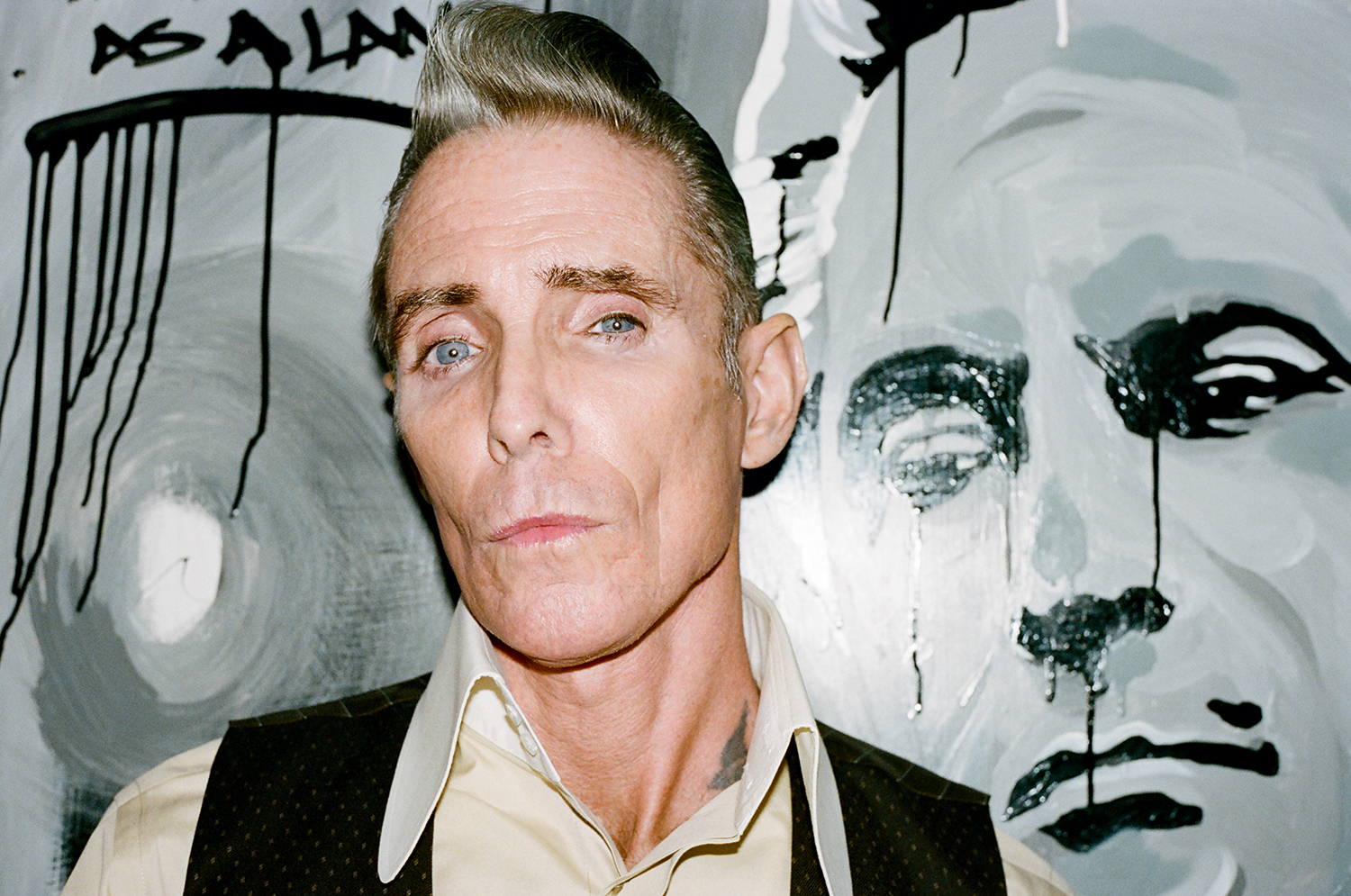 AARON ROSE — Did you always know that you were an artist? At what point in your life did you realize that you had talent?
MARK MAHONEY — I could always draw. I grew up in Boston, and there are these long winters where you’re stuck inside, so I would always draw. My dad would also draw constantly. Little doodles, you know? He’d be on the phone and draw constantly. So every piece of paper in the house would have sketches, profiles of this and that. It’s funny, this week, with the Kennedy assassination anniversary, I was remembering the day of his funeral: I was lying on the floor in front of the TV, and my dad was teaching me how to draw biplanes — You know, probably what he drew when he was my age. I knew that I could draw and that I would do something with that at some point.

AARON ROSE — When did you discover tattooing?
MARK MAHONEY — I didn’t see many tattoos when I was young. In Boston, it was illegal, for one thing. Every now and then I’d see one and be interested. Then I started being interested in motorcycles and the biker guys would be tattooed. Then officially, when I went down to my first tattoo shop, I think I was 15. I went with some older guys. It was a shop in Newport, Rhode Island, and it was like an epiphany. It hit me over the head, and I was like, “Oh my god, this is it!” The atmosphere, the whole fucking thing, just the second I walked in there. It was a real old-fashioned shop. I was just like, “This is what I gotta do.” 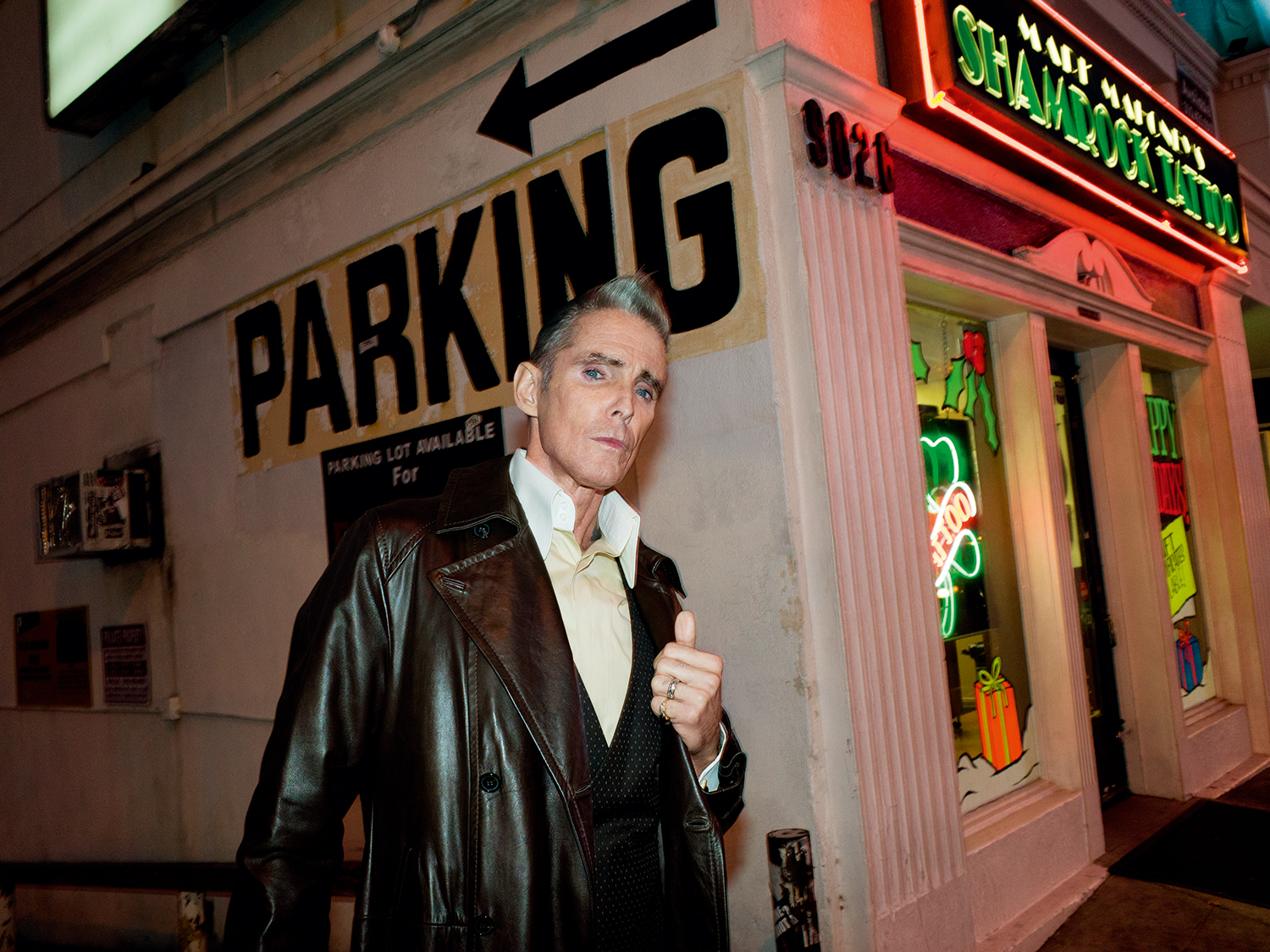 AARON ROSE — And you have been tattooing ever since?
MARK MAHONEY — It took a while to break into the business. It was real hard to find someone to apprentice you. What happened with me was that the leader of my little street gang joined the Navy, and he apprenticed with a guy in Jacksonville, Florida. Then he came back and taught me, and I started working on him. I guess that was in 1976.

AARON ROSE — Tattoos are one of those crazy things that no matter how mainstream or popular they become, there’s always something kind of dangerous or underground about them. What is the appeal? Why, despite the stigmas, do so many people want to mark themselves in this way?
MARK MAHONEY — I think it’s some kind of punctuation. I’ve had people who I’ve tattooed four or five times when they were in their 20s. Around 22 or 23 is when people get into it or whatever. Then I’ve tattooed those same people every five years or so since then. They’re having a baby, they’re getting divorced, or they lose a parent, so it seems to be when a chapter ends and one starts. It’s nice to have some kind of demarcation, something like: “It’s over.” It seems like it has to do with grief or bereavement or whatever. Especially when I do an “In Memory of…” tattoo, I think that people feel like their cross is right there. They don’t have to so actively fucking suffer or whatever. 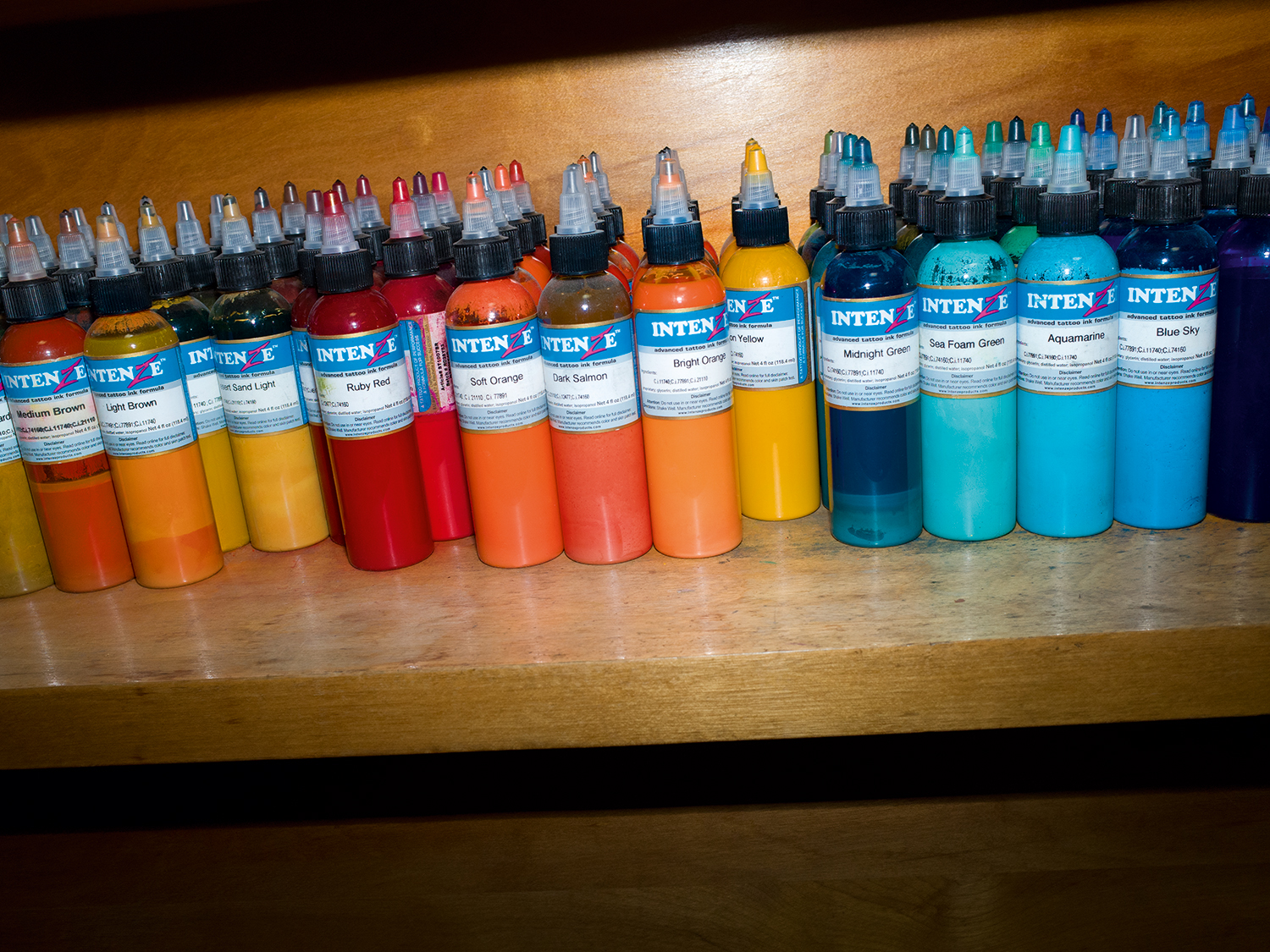 AARON ROSE — So it’s almost like a soul-cleansing device?
MARK MAHONEY — Yeah! They’re just putting stuff in a box and filing it away.

AARON ROSE — What about that old adage that you should never get the name of the person you love tattooed on yourself?
MARK MAHONEY — You know, I’m a romantic at heart. I will always do it and believe in it, but I’m also superstitious. I’ve seen the other side of that, so yeah, that’s a tough one. That’s a really tough one. When my friends are in love and they want to do it, a part of me wants to tell them to think about it, but you know, when you’re in love you don’t want to listen to nobody. You just want to do it! I think it’s great. 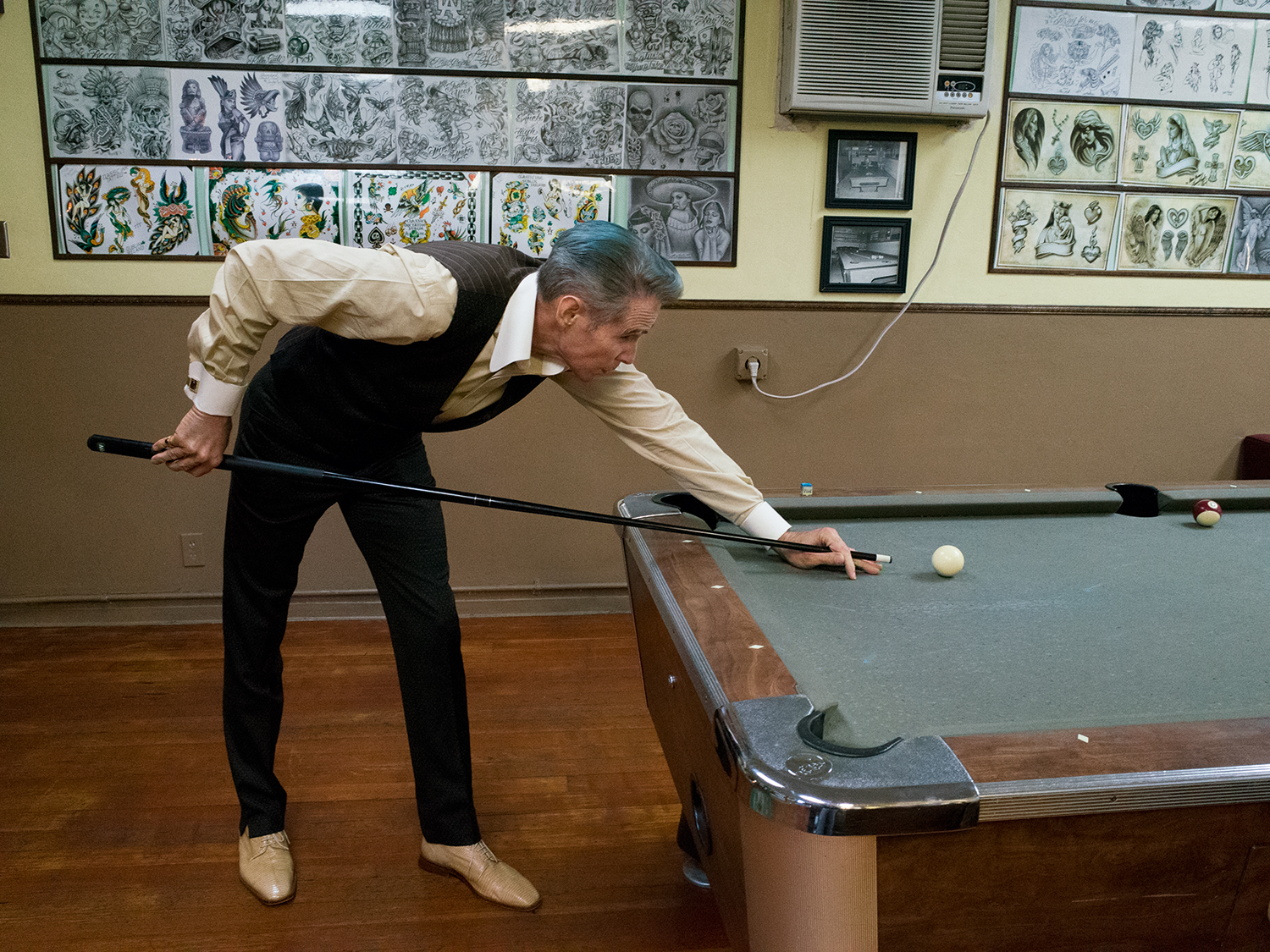 AARON ROSE — When did you move here to the Sunset Strip, and why did you choose this location?
MARK MAHONEY — I went to work for an old friend of mine, Gil Monty, at his tattoo shop. That was almost 25 years ago. I worked for him for maybe a dozen years. He moved to Texas, so I started looking for a spot of my own. This place used to be a record store, and I always thought it was the prettiest storefront in the neighborhood. So, just as the timing was right, I had heard that the guy was selling. So that worked out great for me. The cool thing about this building is that Bing Crosby built it for himself. When I got here, it used to say The Crosby Building out front.

AARON ROSE — Was this his office?
MARK MAHONEY — Yeah, he had offices here for his publishing company and a small recording studio. He also had an apartment upstairs. You see, he liked to hang around with the black jazz musicians. But, you know, he couldn’t just sit with them at a booth at any clubs on the Strip, so he’d bring them here after shows, and they’d have jam sessions, and I guess they smoked a lot of pot upstairs. There’s a little balcony up there. I like that, that this building has a little history, a little atmosphere, it had a little something going on. So we opened up here on the Strip almost 12 years ago. 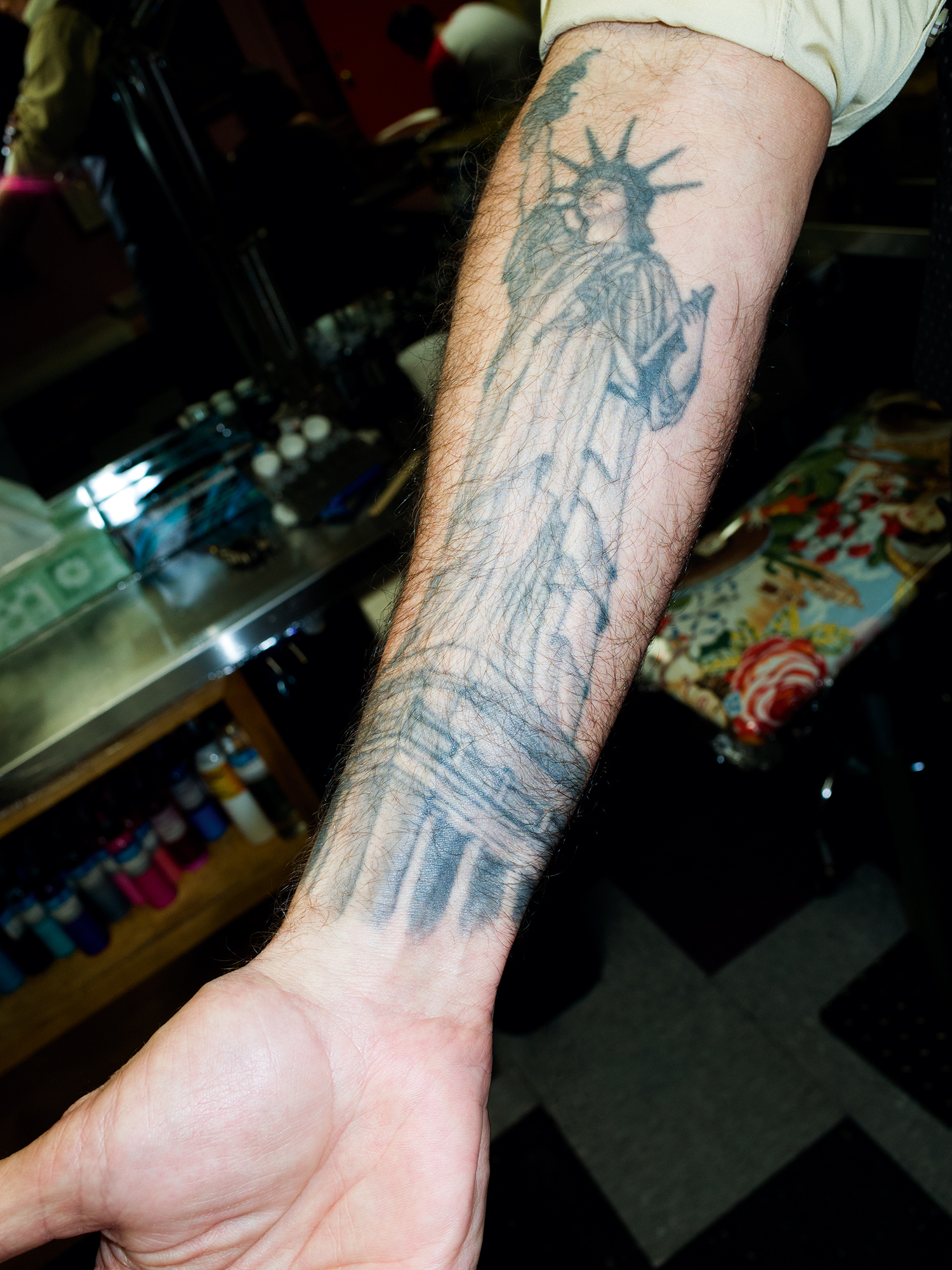 AARON ROSE — What originally brought you to LA?
MARK MAHONEY — When I started on the East Coast I was pretty much working for this one motorcycle gang, out of their clubhouse. I would go on runs with them and to different events, and the first time I saw a really badass tattoo it was from LA. It was from a shop called The Pike in Long Beach. So around 1980, I came out to go to Long Beach and tried to get a job there.

AARON ROSE — So were you able to witness the whole punk scene in LA at that time?
MARK MAHONEY — Yeah, my timing was good. I had gone to art school for a minute, in anticipation of waiting around to find someone to teach me how to tattoo. I met all the cool kids at art school, but I only lasted there about four months. But at that time I met Nan Goldin and David Armstrong, and they were moving to New York, so I got caught up in that for a while. I left Boston around ’77 and lived right around the corner from CBGB, so I was involved with that scene, too. I stayed with the guy who managed Johnny Thunders, so that was cool. But it was always bikers and punk rockers that got tattooed in those days. So when I moved to LA I picked it up out here. But the punks in LA were so different from the punks in New York. Back there they were like art school kids and out here most of them were working class, you know, surfers. It was different, but I dug them both.

AARON ROSE — Do you have any particularly fond memories from that time?
MARK MAHONEY — I was out here for a year and didn’t have any photographs of my work, so I had a party. I invited everybody I had ever tattooed over and got a guy set up in a room with a camera, and I think the Vandals were gonna play. So the sun’s starting to set and there were, like, 10 people in one part of my backyard and 10 people in the other. It was 10 old gray-bearded bikers and 10 Mohawk kids. So one guy gets on his bike and he’s getting ready to leave and I’m like, “What’s going on?” He’s like, “Oh no Mark, this is gonna be bad. These people are all too different.” This hadn’t even crossed my mind! I mean they both wore black leather jackets, they all drank beer, what the fuck? So he split, and I started to get nervous. But then it ended up being this epic party. Everybody had a ball! The bikers got to fuck young punk-rock girls, the cops came. It was really cool. The cool thing about tattooing is that you get to meet all different kinds of people. That’s the thing that I like most about the Strip. I get rich kids, poor kids, East LA kids, everybody! It’s a rite of passage; you have to come to the Sunset Strip. 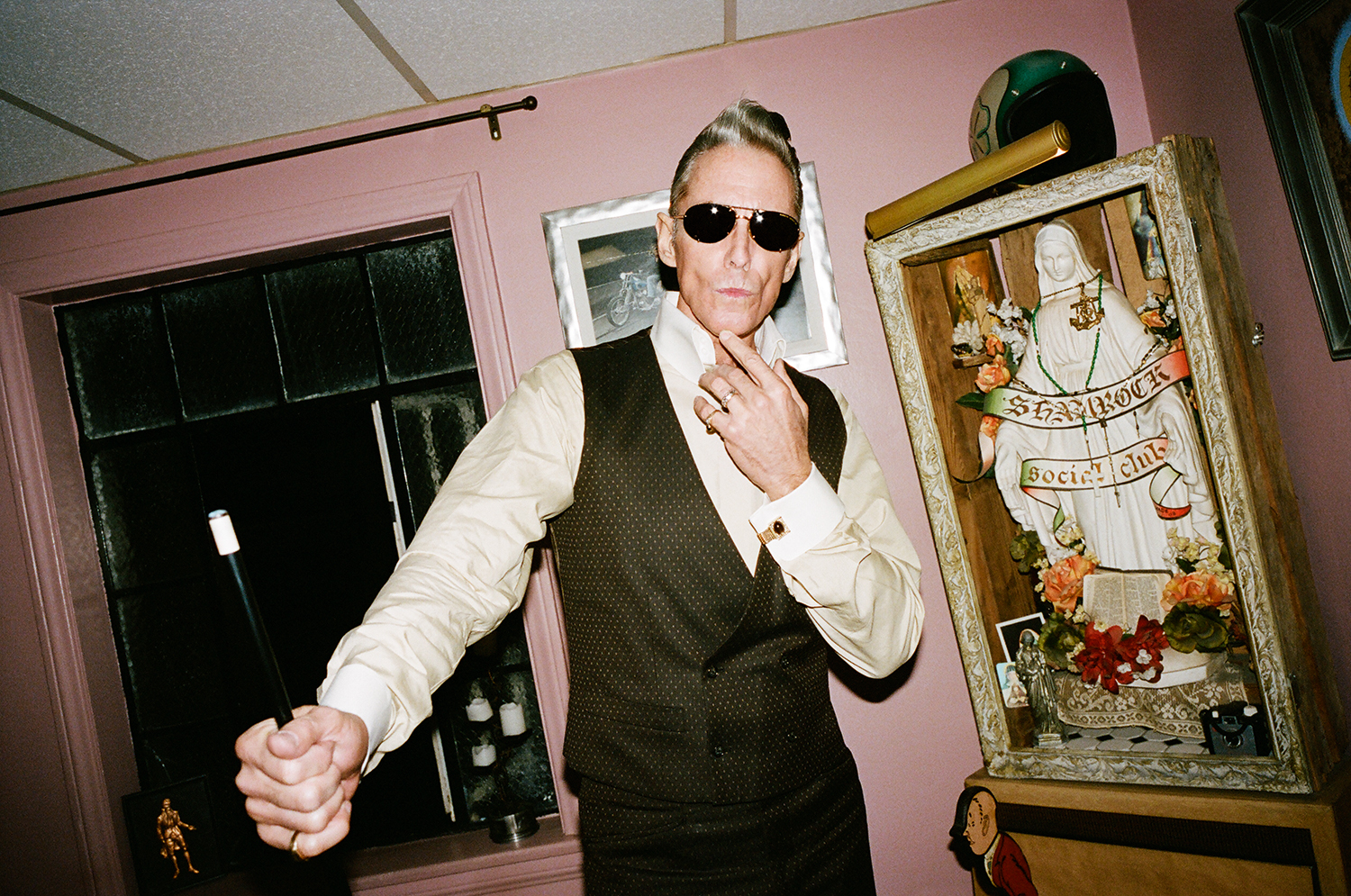 AARON ROSE — So you’re really open to tattooing all different types of people, even though it’s associated with this very underground demimonde culture.
MARK MAHONEY — I love that tattooing has working-class roots. I like that about it. I think that that should always be a part of it. But I think that rich people like that, too. I think it makes them feel like they’re part of the world. There was a tattooist in England in the early 20th century, at the time it was kind of popular among society people in Europe. People like the king of Denmark were getting tattooed. Winston Churchill’s mother got one, and the guy that she went to was named George Burchett. His business card said, “Where the elite and the underworld meet.” This was around 1919, and not much has changed. 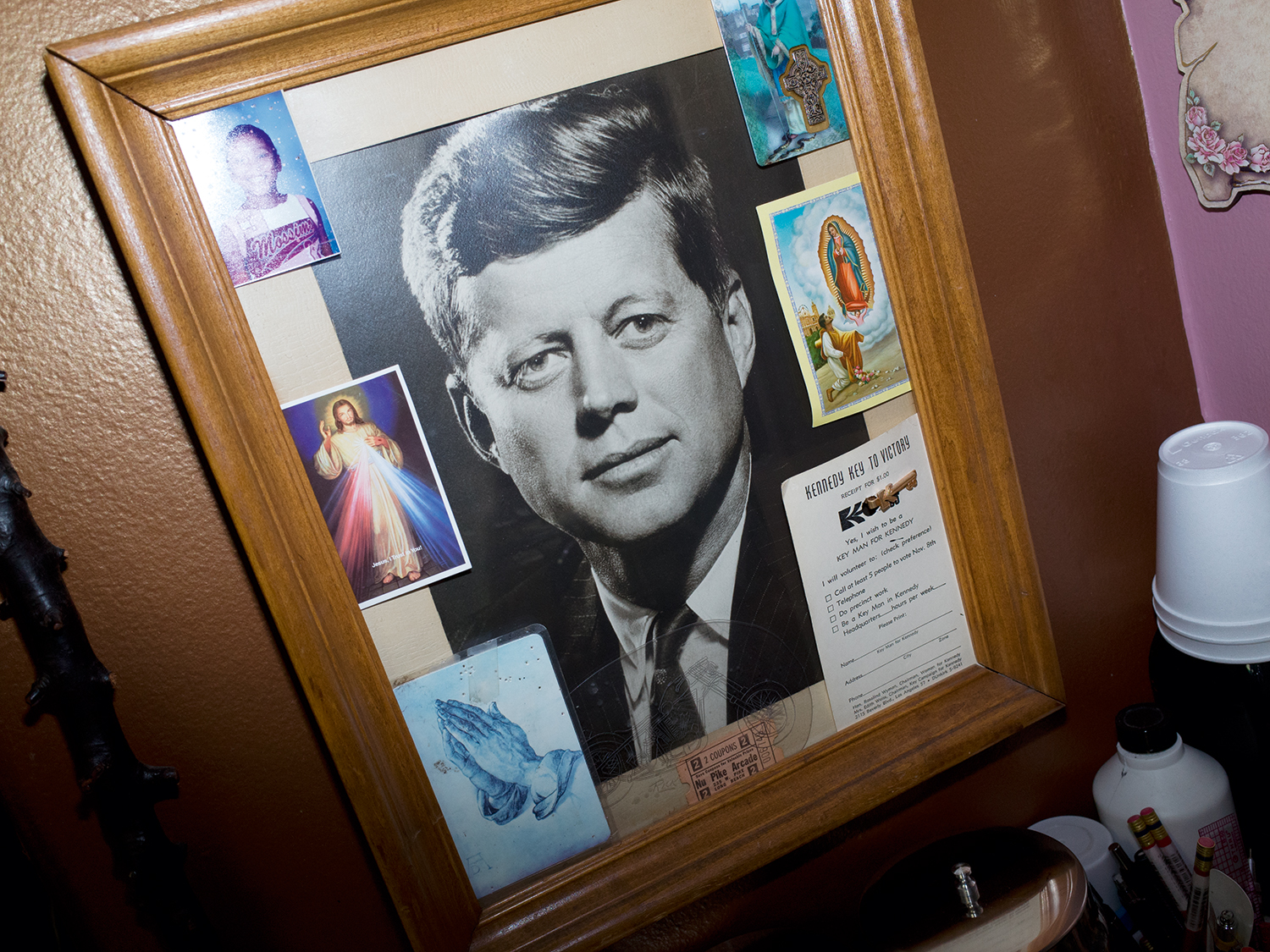 AARON ROSE — Why did you call your shop the Shamrock Social Club?
MARK MAHONEY — Back east, when you went into a tattoo shop, those guys were mean! You tried to ask them a question, and they just barked back one-word answers at you. You couldn’t get anything out of them. So I always said to myself that if I ever had a shop, I would want it to be nice, a place where people felt comfortable and relaxed. My boss at The Pike would always yell at me because I’d have people hanging around, but I liked it. Tattooing is a social art. It’s not like painting, where you’re alone and miserable. I might be the guy who’s doing the work, but it’s your tattoo, too. It’s your input, it’s your idea, and so it really is a collaboration. A lot of tattooists don’t get that. They think it’s all about them. I think that’s one of the reasons that people come to me.

AARON ROSE — So opening your shop really was about making it a community.
MARK MAHONEY — Yeah, that’s really what it’s about. The people who get tattooed here, or hang around here and become a part of this family, well, if someone needs an apartment or someone’s got some pitbull puppies that need a home, there’s a community here to help. I like to have that. It’s about connecting.

AARON ROSE — Is that how you would like to be remembered? How do you imagine your legacy?
MARK MAHONEY — Maybe that I was a good listener? I care about the people I tattoo, you know? I would want people to think of me as a guy who gave a shit.