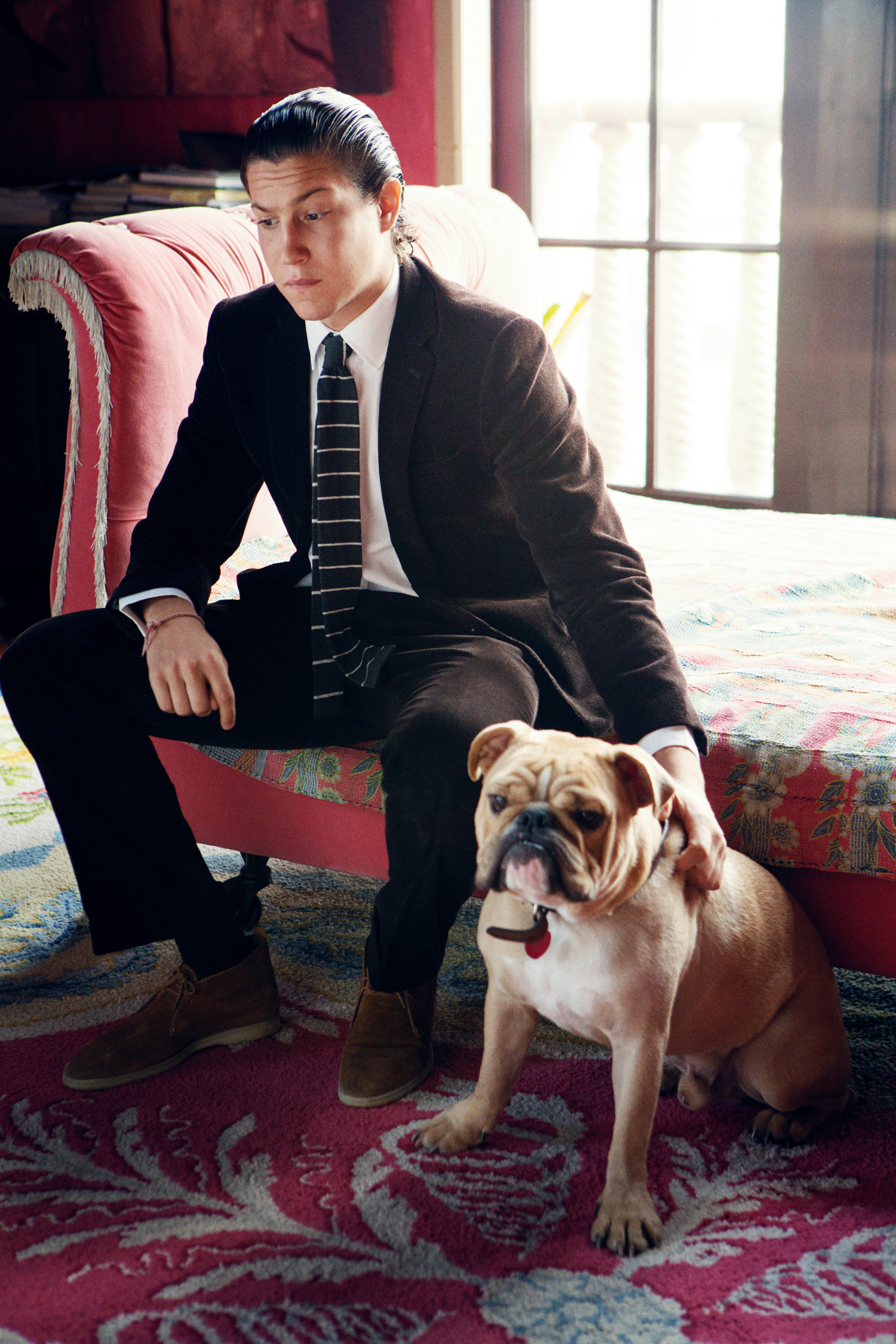 At the young age of 26, Vito Schnabel has made a name for himself as a serious dealer of art. By representing artists like Terence Koh, René Ricard and the much-hyped Bruce High Quality Foundation, Vito has managed to win some of the biggest collectors as his clients — all without having a traditional gallery space. Of course, growing up as the son of famed artist and filmmaker Julian Schnabel has opened a few doors, but without ambition, business sense, and an eye for talent, Vito would not have the reputation that he has today. The most interesting thing about him is that he is transforming the approach to art dealership by being an independent curator, with no gallery to his name. In February 2013 he will curate a show of paintings at the Acquavella Galleries in New York.

SVEN SCHUMANN — Vito, why don’t you have a gallery?
VITO SCHNABEL — I have an office that has a showroom, so people can come and visit me. But just the model of finding a space that was appropriate for each show was always kind of the art of doing what I do. It made it more fun in a way. You know, I’m 26 and I put together shows in places like London, Zurich and Los Angeles. It’s been working, so I kind of just let it be. But having a gallery is not something that I would rule out.

SVEN SCHUMANN — You have already managed to collaborate with legendary gallerists like Bruno Bischofberger and Mary Boone. Do you like the process of working together with other galleries?
VITO SCHNABEL — Absolutely. One of the other great things about not having a gallery is that it allowed me to work with people I admire, who have done great things for a long time. The collaborative aspect of it has taught me a lot, continues to teach me and just allows me to work on different platforms. I always try to work with the best people.

SVEN SCHUMANN — Do you remember the first painting you ever purchased and do you still own it?
VITO SCHNABEL — I do. It was a painting by René Ricard and I do still own it.

SVEN SCHUMANN — What was the first painting you ever sold?
VITO SCHNABEL — The first major sale I ever made was for my sister Lola Schnabel. We went uptown to a hotel room where we had arranged a meeting with this man who wanted to buy some of my sister’s work. I drove her up in my mother’s car. I didn’t have a license, and she kind of stuffed all the work in the trunk. It was a pretty funny experience. I was 15 when that happened.

SVEN SCHUMANN — How much did you sell it for?
VITO SCHNABEL — I think I told Lola, “We should try to sell all four or five of these for 15 grand.” The man bought them all. That was the first deal I ever made.

SVEN SCHUMANN — How old was this guy buying art from a 15-year-old?
VITO SCHNABEL — Probably 44 or 45 at the time.

SVEN SCHUMANN — You now represent not only well-established artists like Ron Gorchov and René Ricard, but also emerging ones like Terence Koh and the Bruce High Quality Foundation. Who came first?
VITO SCHNABEL — The first show that I put together was a group show of about eight artists from all over the world, whom I had grown up around. Ron Gorchov was the second show that I ever had. He was a real mentor for me. He’s a real art historian and a great painter. The fact that he let me show his paintings was a huge opportunity. Our show led to his show at PS1, which was pretty interesting because PS1 is really for emerging artists, and I think he was 78 at the time! So it wasn’t that the younger artists came first and then the more established ones followed. It came as a mix.

SVEN SCHUMANN — How do you select the artists you want to work with now?
VITO SCHNABEL — I try to trust my eyes and my intuition. It’s really whatever, whoever makes work that speaks to me. It’s the only way I can really operate. I need to love and be enthusiastic about what I’m dealing with, otherwise it doesn’t really work out.

SVEN SCHUMANN — What was it about the Bruce High Quality Foundation, the anonymous anti-establishment artist collective, that made you want to work with them?
VITO SCHNABEL — When I was 18 or 19, my sister was at Cooper Union. She told me about one of the Bruces, who was working in an interesting collaborative, so I went and visited them. They were extremely smart and just had this great young energy. Their work spoke to me and looked like nothing I had ever seen before, so it was a pretty easy decision for me. I was working in different ways, experimenting with exhibition formats, and BHQF was working in every medium, aiming to be artists that did everything. So there was a good convergence there.

SVEN SCHUMANN — Their motto, “Professional problems. Amateur solutions.” and their goal, “to foster an alternative to everything,” are both rather cryptic. How would you explain what the Bruce High Quality Foundation is about?
VITO SCHNABEL — They are about education. They’re about giving back. They’re about art history. They’re about trying to do something that hasn’t been done before. I think they have a real sense of community that is really important nowadays. They do all kinds of things, but to them their most important project right now is their school here in New York, called Bruce High Quality Foundation University (BHQFU).

SVEN SCHUMANN — It’s their free alternative to a $200,000 art-school education. What’s the idea behind this educational program?
VITO SCHNABEL — New York can be a really lonely place when you’re an artist coming here for the first time. It’s kind of the only place you feel like you should be, but you get here and you can really feel isolated. They are creating this place where people can go — artists, writers, anybody who really has a voice. It’s a place for exchange and education.

SVEN SCHUMANN — Have you ever discovered an artist through this unconventional school?
VITO SCHNABEL — There’s a girl named Kathryn Kerr, a great painter who went to Cooper. I met her through them. I haven’t shown her yet, but I will work with her at some point. So yeah, they’ve definitely been a great outlet for me.