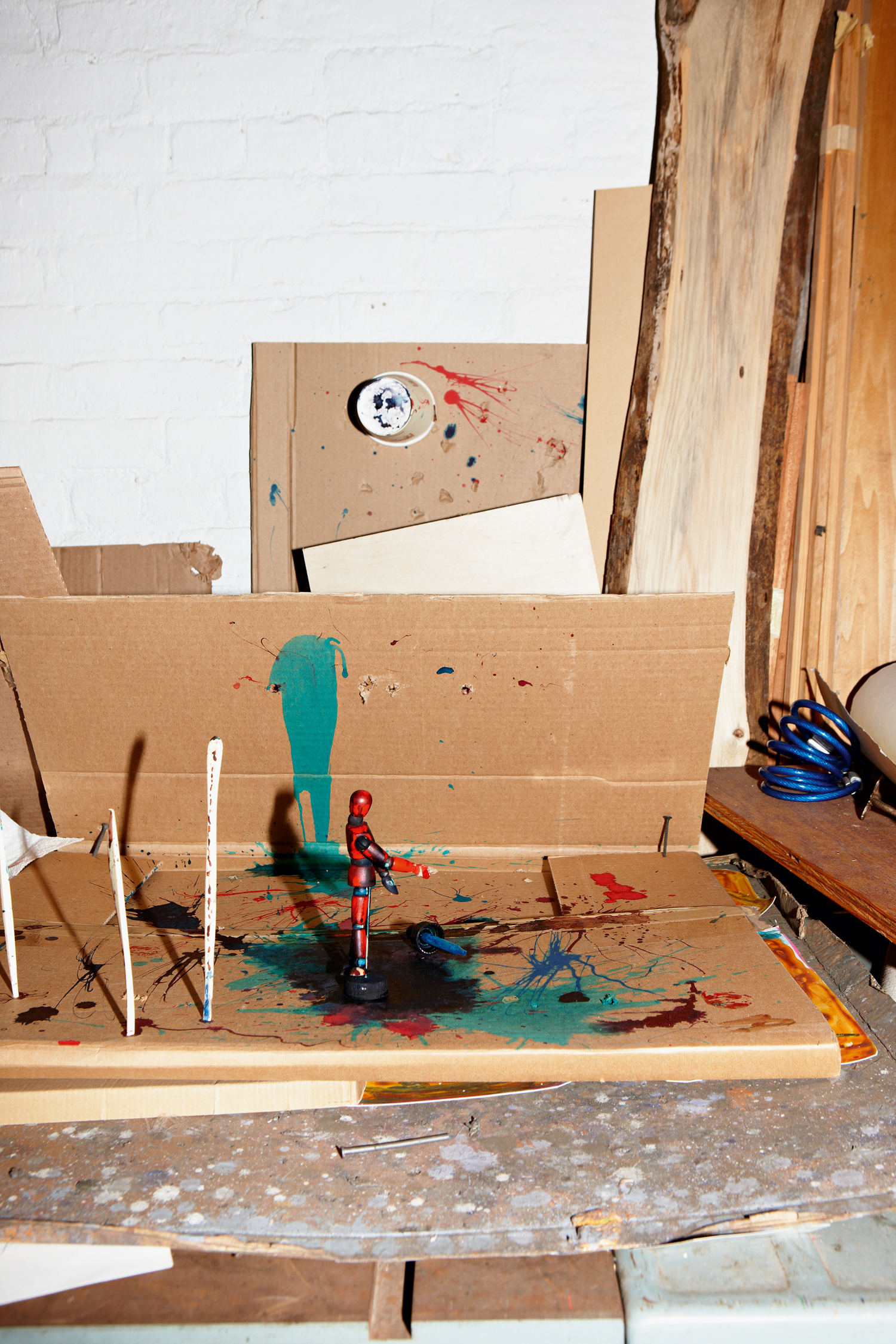 BILL POWERS — What is the relationship between the octopus and the helicopter in your work? Are they adversaries?
STEVE DIBENEDETTO — Not really. I have no specific agenda in terms of how they’re meant to interact. The one commonality they share is a hub-and-spoke format where both entities spring from a central axis. You can see that with other motifs in my work, Ferris wheels and UFOs, for instance.

BILL POWERS — It’s almost like a blending of morphology and technology.
STEVE DIBENEDETTO — Yeah, that’s good. The octopus came into the picture via a specific line from Terence McKenna, the psychedelic thinker, who referred to it as a possible model for future communication. He was alluding to the fact that the octopus changes more radically in shape and color than any other creature. It can externalize its emotions and thoughts, which he relates to a linguistic model. He views the octopus as an avatar of some advanced psychedelic state where you speak in visual terms. He compares us imagining this state of evolved communication to what it would be like for a pre-linguistic human to hear someone uttering words. 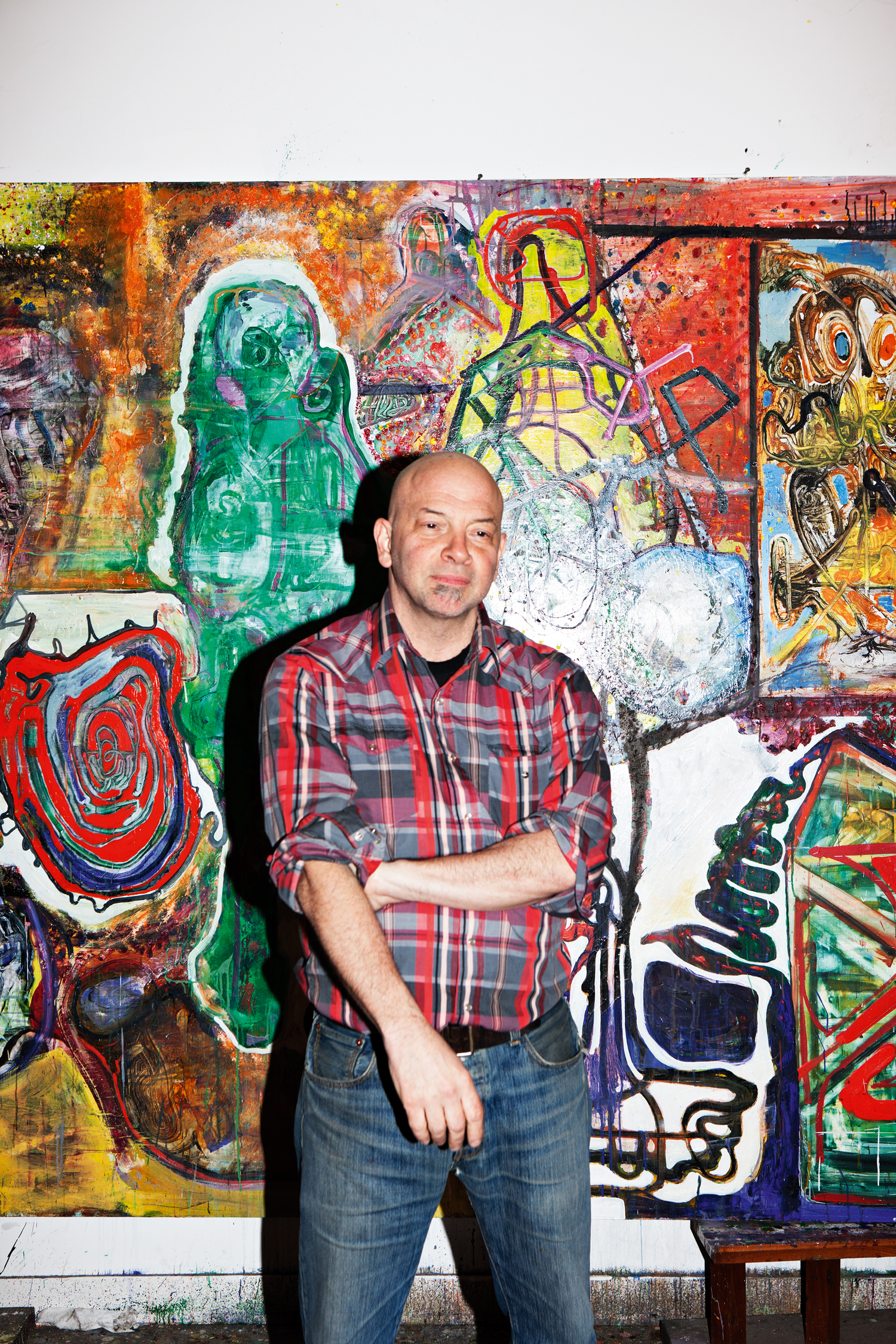 BILL POWERS — And your interest in helicopters?
STEVE DIBENEDETTO — That came about through Arthur M. Young, who invented the Bell-47, the first commercially licensed helicopter. You can find one hanging in the atrium at MoMA. Arthur Young came out of Princeton with an interest in Einstein. Essentially he was a physicist/philosopher preoccupied with multi-dimensional states of consciousness. He developed a whole so-called theory of process, outlined the mechanics of the universe while taking into account the “enigma of time” as well as a lot of weirdo stuff: the paranormal, spirituality, etc.

BILL POWERS — Almost like pre-string theory?
STEVE DIBENEDETTO — Way before that. This is in the 1930s. Arthur Young represented a nexus of concerns that were at times visionary and simultaneously quite nuts and bolts. The physical mechanics to him were almost a hobby. In his book The Bell Notes, he admits that while making the helicopter, he became obsessed with something he called the “Psychopter,” a device for transporting consciousness and the self. He also admitted it can’t work.

BILL POWERS — So are your paintings an attempt to reconcile psyche and vehicles?
STEVE DIBENEDETTO — Oh gee, I don’t know. To my mind, encoding paintings with these images hopefully triggers greater awareness of these concerns. I’m not saying I think all this stuff is necessarily real. UFOs are real because we have a word for them. It doesn’t matter if little green people ever landed here. The UFO also operates as the über-other, a kind of secular religious icon. It’s basically an object on which we can hang all the phenomena we don’t completely understand. 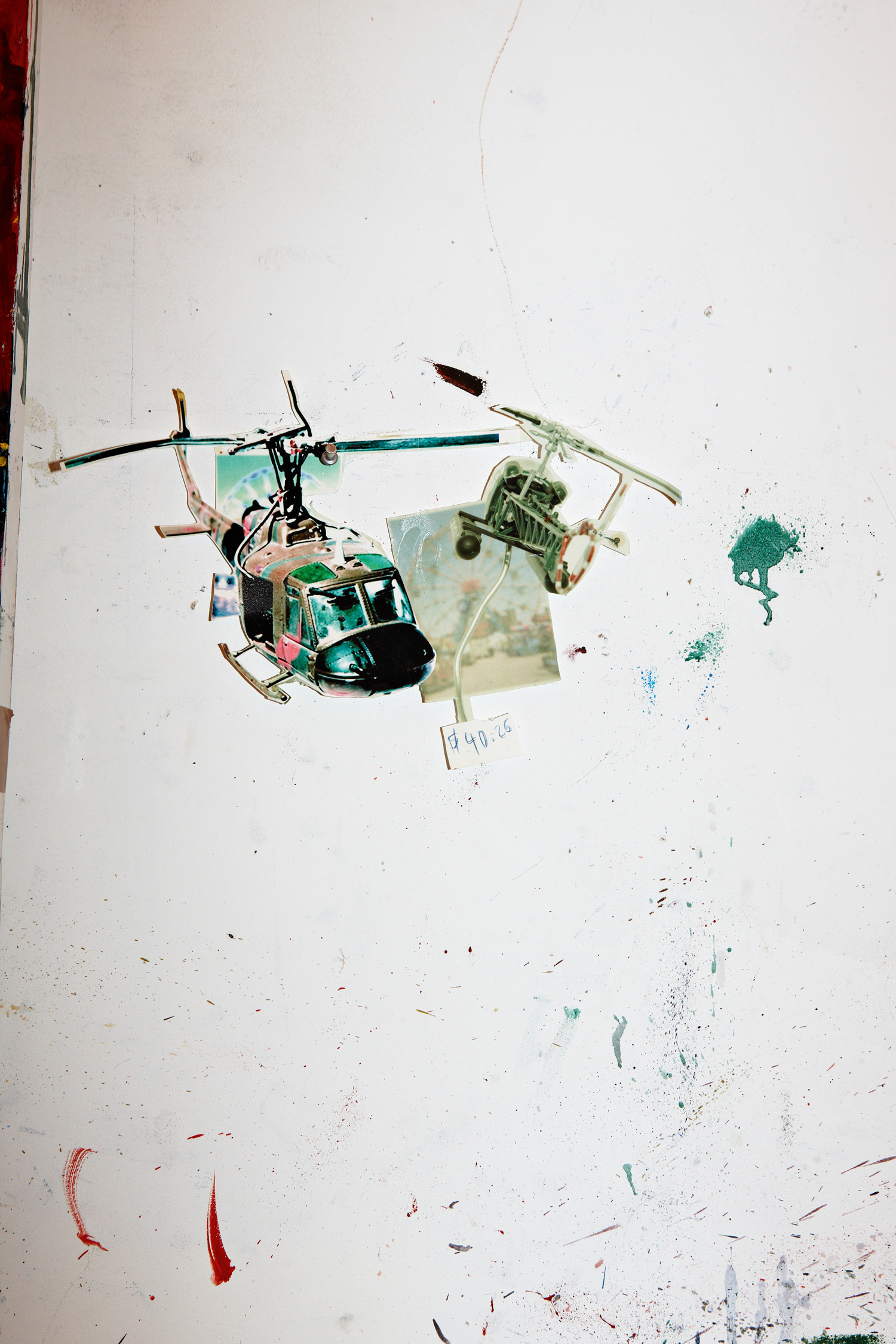 BILL POWERS — I always thought that’s why we have art: to answer with our imagination all the mysteries we can never explain in concrete terms.
STEVE DIBENEDETTO — Definitely. Sometimes my output fluctuates between the literal and the absurd.

BILL POWERS — And I’ve noticed some Easy Rider images around the studio. How does that tie in?
STEVE DIBENEDETTO — Perhaps as an antidote to my more exploratory ideas, a kind of pop-culture way of interacting with the “real” world. Easy Rider popped up after I realized there exists this persistent ’60s-ness in my work. As I was exploring why this might be so, I remembered how much impact images of Peter Fonda and Dennis Hopper had on me as a kid. I figured I should document this. Plus they do function as aliens of their time in a way.

BILL POWERS — For people who aren’t familiar with your background, who were some of the other New York artists you came up with?
STEVE DIBENEDETTO — I had a tangential connection to Neo Geo types, but I never had that type of mentality to group myself. I’ve known Ellen Berkenblit since before high school, and I knew Steven Parrino pretty well. He always thought that, you know, we’re a gang, but for some reason I always resisted that impulse. I got to know Bob Nickas through him. And Cady Noland. She’s a curious one.

BILL POWERS — Didn’t you tell me a story about how your family owned a famous bowling alley in Riverdale?
STEVE DIBENEDETTO — I was born in the Bronx and, yes, my grandparents ran Fieldston Lanes. Their claim to fame was that in 1974 John Lennon and Yoko Ono came in to bowl. I wasn’t there, unfortunately.