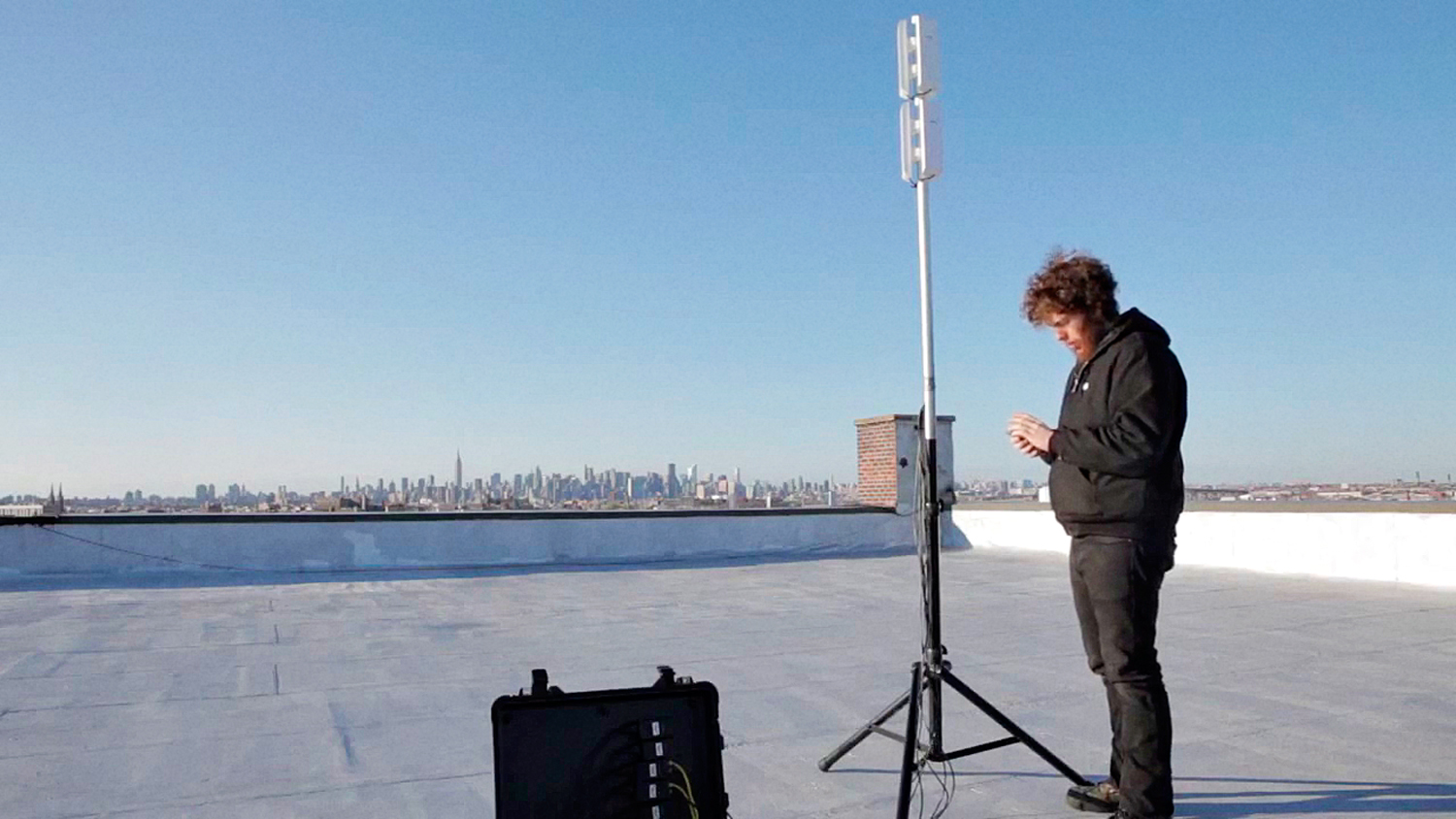 Film still from Free The Network by Motherboard.tv

The Free Network Foundation is an advocate for Internet freedom based on the belief that access to the Internet is a human right. To protect that right, it has envisioned a radical new Internet — one that is owned and operated by its users. Isaac Wilder, executive director of the FNF, calls on Web users to defend their digital transmissions as personal intellectual property and explains his vision for the emergence of a public Internet with protected privacy.

ELISE GALLANT — How do you visualize the Internet?
ISAAC WILDER — Imagine the Internet as a bunch of people in a room. They’re trying to pass messages back and forth, but they can only do it if they know the name and number of the person they’re sending it to. The people who invited everyone to the party are the ones who know the most names and numbers. So everyone goes to them, gives them their messages and asks them to pass it on. Right now, no one is sealing their letters, so the hosts can read everything that’s being said. More than that, most folks don’t even hold on to their own correspondence — they trust it to a middleman.

ELISE GALLANT — Today access to the Internet is a privilege. It is something that we must request access to through providers. How do you imagine free access?
ISAAC WILDER — I would compare it to a party. Rather than a private party, we imagine this interaction occurring in a public square. We are still playing the letter-writing game, but instead of relying on the few A-listers to write out and pass along our messages, we learn to play for ourselves. We write and seal our own letters, asking any and all to pass them along. There is no host, and there is no cover charge. It’s a much better party!

ELISE GALLANT — How do you propose to transfer the power from these Internet Service Provider behemoths into the hands of the people?
ISAAC WILDER — The word “Internet” has two senses. The colloquial sense is that of a collection of networks that have been built and interconnected. The other sense, the term-of-art, is the set of protocols that enable those networks to interconnect. These protocols are not owned by anyone; they are intellectual property held in common by all humanity, which is what makes them so profoundly powerful. The shift to a cooperative network merges these two ideas so that not only our protocols for interconnection are held in common but also the actual networks themselves are owned and operated by the people using them — funded, built, maintained, and governed as a public good.

ELISE GALLANT — What is this new Internet structure you are fighting for?
ISAAC WILDER — Allow me to return to the idea of the host who knows everyone’s address. There is an analogy between the protocol of Internet communication and the protocol of letter writing. What we’re suggesting is that the senders seal their letters and plan a better party. When the host handles the parcel, she will say, “Well, I can’t read this, but I’m bound by the protocols of our letter-passing party to give this to the recipient.” When it’s received it reads: “Hey! This is Leroy. In the future when you want to reach me, here is my address. Give it to me directly.” Basically using the infrastructure that already exists to facilitate and coordinate the emergence of a communications network that doesn’t rely on centralization. In real terms, what that looks like is using wireless microwave technologies and building small, neighborhood-scale networks that act as co-ops. These link together and make regional-scale networks. Initially the networks are connected via existing Internet service providers, but as they get bigger they grow into each other and no longer need the intermediaries. So we’ll use existing protocols to coordinate and facilitate the emergence of a new Internet. The end goal is a confederated global-scale network that is owned by its users. The magical thing about the Internet is that the protocols are egalitarian. The Internet is by definition a set of practices that are replicated all around the world on a small scale. The protocols of the Internet are free, but the Internet itself has always been within someone’s custody. For a long time it was the sole property of the federal government of the United States, then they passed the Telecommunications Act of 1996 and private operators started being involved. There was a shift in power from the public sector to the private sector. What we are suggesting is another transfer of power, from the private sector to the people. Not government, not private industry, but the voluntary association of free individuals.

ELISE GALLANT — Can you explain why you say that “the global revolution is when people take control of the means of reproduction.” How does that relate to what you’re talking about here in terms of people taking control of the means of direct communication?
ISAAC WILDER — Those things are the same to me. Where the means of production basically means the factories, the means of reproduction means the networked computers. The basis of our economy is currently information — it’s no longer goods, it’s no longer commodities, really. The engine of our economy is information. As long as the knowledge infrastructure remains controlled by states and corporate actors in whose interest it is to maintain the status quo, we’re going to keep destroying the planet, oppressing basically everyone in the southern hemisphere, or anyone with dark skin in the northern hemisphere. We’re going to keep forcing billions into prison, keep living in a slavery-based system where a few thousand people have almost everything and then billions have almost nothing. But if we can say no, we’ll build our own network, and then we won’t have to pay rent to them anymore. Our big, no-cover-charge, everyone-is-invited party might become a revolutionary force, a potential harbinger of a profound shift in the power structures of our civilization. The ability to organize is the ability to resist. There is incredible potential in digital communication, but it is currently undercut in a way that makes it completely impotent. Occupy illustrated this in a sad, sincere way. If you’re trying to organize a revolution on Facebook, you are sadly deluded and dangerously misled by the corporate establishment. To rely on corporations for that capacity is to lose the struggle before it has begun.

ELISE GALLANT — What are the dangers in the current technicical configuration of the Internet?
ISAAC WILDER — We should be responsible for where we store our data and less comfortable with sending our information to external servers or “clouds.” It represents a threat to personal freedom in the very gravest sense. It is myopia alone that allows folks to accept a great long-term ill in exchange for a modest short-term benefit.

ELISE GALLANT — Do you mean that what we call the cloud is part of the problem today?
ISAAC WILDER — There is a meteoric rise in the usage of the word “cloud” because it’s not as anxiety-inducing as the knowledge that what you’re doing is putting all of your precious data, your digital lifeblood, your very essence in the digital realm, on somebody else’s infrastructure and into somebody else’s care. If we want to shed some of our illusions, then when people hear the word “cloud,” I suggest that they replace it in their minds with the phrase “someone else’s computer.” When somebody says “I’m uploading onto the cloud,” what they mean is “I’m uploading onto someone else’s computer.” If they say, “We need cloud infrastructure,” they mean, “We need infrastructure that is built on other people’s computers.”

ELISE GALLANT — Why do you see the Internet as the priority for activism?
ISAAC WILDER — Well, that’s one focal point. There are a number of causes that you could choose: ecological equilibrium, the prison-industrial complex, poverty, etc. To me it makes sense to focus on communications first, because it serves as a most powerful foundation for any other campaign.