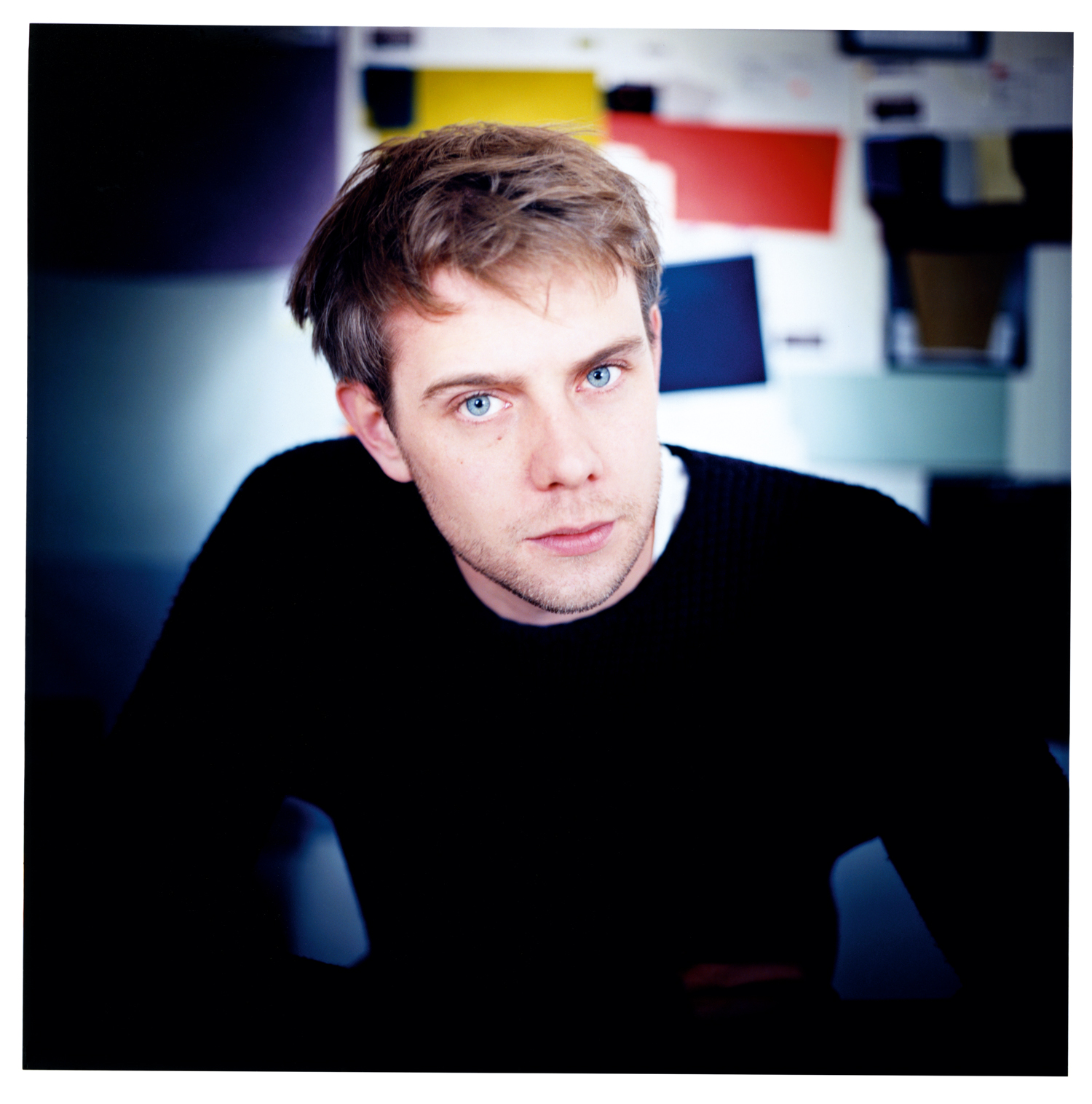 Jonathan William Anderson, the boyishly good-looking 28-year-old from Northern Ireland at the helm of one of fashion’s hottest new brands, has risen swiftly through the industry ranks. He was offered a job as a window dresser for Prada one month after enrolling at the London College of Fashion. By 2008, his eponymous menswear label J.W. Anderson was launched; a women’s line followed two years later. Both lines traffic in futuristic, androgynous designs that have garnered widespread critical acclaim. This fall Jonathan was chosen as the top-ranking designer in the British Fashion Council’s NEWGEN showcase.

PAULA GOLDSTEIN — Is there a reason the brand is called J.W. Anderson? Not many people actually know you as Jonathan. Are you hiding yourself?
JONATHAN ANDERSON — Kind of. I wanted to build a brand straight away. The thing I always harp on is that I never set out to be a young designer. I went out to build a brand. And a brand needs a logo and a name. A brand needs to stand on its own legs. Other people can design for it in the future, which would be my dream one day. I think J.W. Anderson’s kind of like Cecil B. DeMille, it’s an abbreviation. It’s like D.H. Lawrence. It’s the idea of the writer, but not the writer. I wanted it to be as if the name had always been there. It’s like you were just taking up working for that brand. You’re just working for that name.

PAULA GOLDSTEIN — What was it like growing up in Northern Ireland?
JONATHAN ANDERSON — It was very colloquial. But in a good way. My dad was a rugby player, and my mother was an English teacher, so I had quite a weird family dynamic. My dad was never there. My mother was always there. My father was from a farm and my mother was from a semi-wealthy family. In the summer we were sent to work on the farm. I was quiet as a child until I left Ireland and got a bit crazier.

PAULA GOLDSTEIN — Did you always know you wanted to work in fashion?
JONATHAN ANDERSON — I initially wanted to be an actor. I was in musical theater and in the national theater. I was in every youth group you could physically get me into, and then I got offered a place at the Actors Studio in Washington, D.C. I went there and kind of found myself, as one would say. It was the first time I’d lived away for such a long period of time and it was nice. I was doing A Midsummer Night’s Dream and was really into the costume department. I was going up to get costumes done for it, and I got into this idea, and I dropped out. I took the summer off there, and my parents witch-hunted me back home to actually do something. I went back to Dublin because my father was coaching the local rugby team there, and I started working at the Irish department store Brown Thomas.

PAULA GOLDSTEIN — How did you really start working in fashion?
JONATHAN ANDERSON — When I was working at Brown Thomas, this woman, a visual merchandiser for Prada, came in and was impressed with what I did for the store. She said, “This is amazing! We should give you a job. Why don’t you move to London?” I was hesitant, but from that moment on, I decided I would move to London. I rustled up some shitty portfolio, made some clothing sketches, and applied to all the schools. Obviously everyone said no, except the London College of Fashion, menswear. I was there for about a month, and then I went to Prada in London. They said, “You can have a job. You’re starting today.” So I started working there and didn’t really turn up to school anymore. I got drunk a lot at night and had a lot of fun. I actually had more fun then than I’m having now — it’s a lot more serious now.

PAULA GOLDSTEIN — You are considered the new design talent. Do you feel like you know your place in the business?
JONATHAN ANDERSON — I think I’m starting to. I think in this industry you have to find your little crag and then fit into it. There’s only so much space. And in London, we fell into a category a long time ago where we were mixing menswear and womenswear. No one had been doing that at that point besides Raf Simons. I’ve always gone through menswear to get to womenswear. It’s the only way I can relate. I try to find the right ratio of sexual ambiguity and I work toward a newer form of architecture built on a woman’s body through a man’s perspective — even though I still find that the idea of a man designing for a woman is confusing.

PAULA GOLDSTEIN — People have been commenting that your menswear is very feminine and your womenswear is very masculine. Is that a deliberate decision?
JONATHAN ANDERSON — I just think that’s what was getting me. For me, menswear is an exercise to get to women’s. I will admit, menswear as fashion is not attractive on a man. You want a guy who’s wearing a T-shirt and a pair of jeans and a pair of trainers. That’s the way it is. But I think men’s has to be exercised and pushed. Because ultimately, 400 brands are doing the same thing. 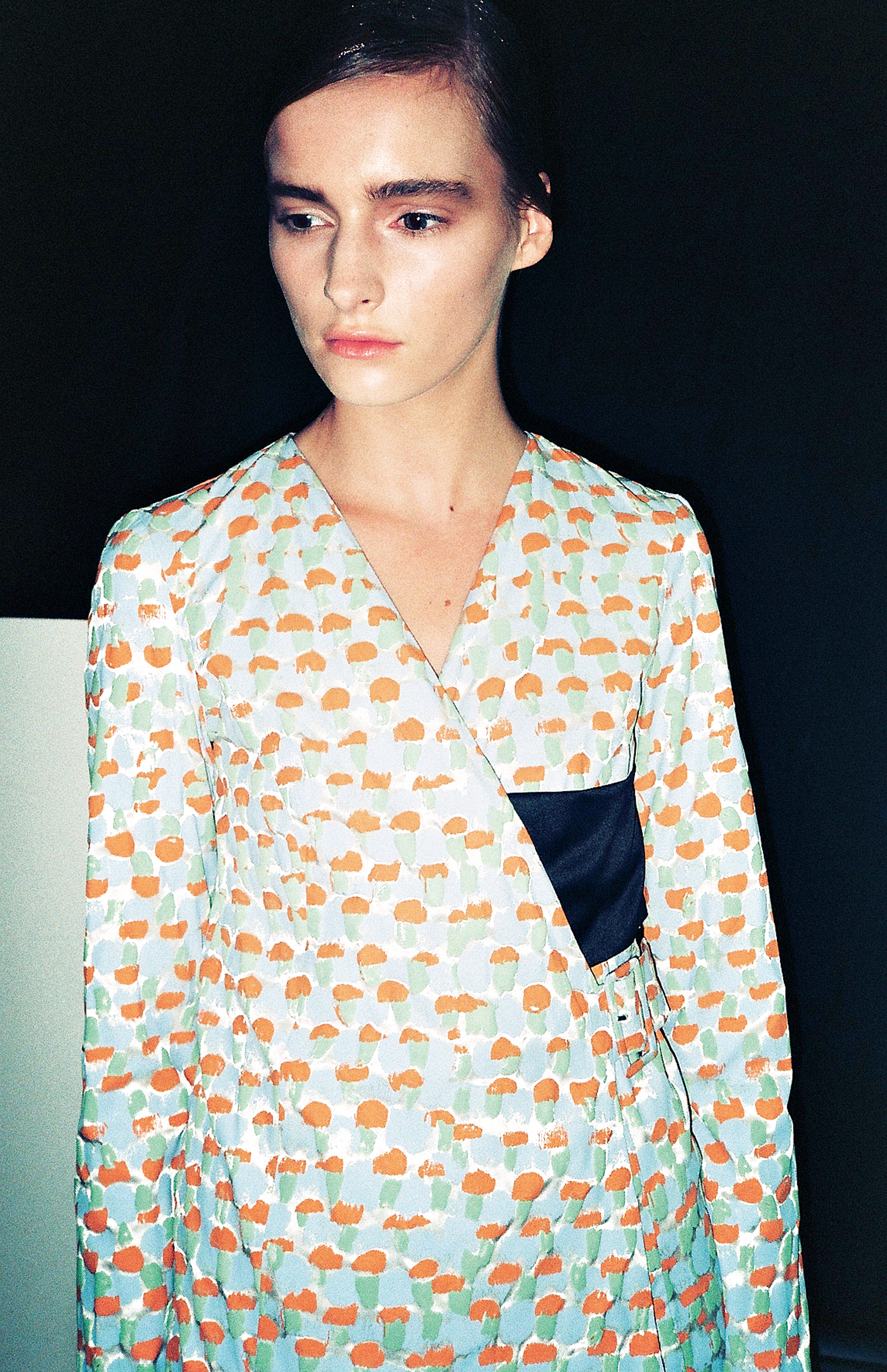 Backstage photography of the S/S 2013 collection by Harry Carr

PAULA GOLDSTEIN — Do you feel like being in East London as a young designer is a bit too small sometimes, and that you’re boxed in?
JONATHAN ANDERSON — The media does that. I’m here because my studio’s super and it’s convenient. But I don’t design for London. I design for the world. And I’m traveling a lot. I never feel trapped. I don’t see myself locked creatively to a certain part of the world. In London, we like things to be fun. But a creative art form like this has to have a commercial side. That means it has to be new, modern clothing that can be seen and contextualized in daily life.

PAULA GOLDSTEIN — Do you think you will have to leave London and show in Paris or Milan to become a properly established brand?
JONATHAN ANDERSON — No, I don’t think so. I recently met with Christopher Bailey, and we were talking about this. You can show in London, but you have to take control of it. You’re only showing it in London, but you’re actually doing it for the whole world. I think the Internet helps, too.

PAULA GOLDSTEIN — How would you describe your approach to fashion?
JONATHAN ANDERSON — I would like to think it is a hybrid of creativity and business. I do something that is very cutting-edge from a design perspective; it’s very focused and I know what I need to do. Ultimately we need resources to do it, but that’s what we’re working on. Our sales are growing very fast; about 70 distributors stock us worldwide.

PAULA GOLDSTEIN — How do you put together a new collection?
JONATHAN ANDERSON — For a while the process was to start from a blank page, but now I’m into this idea of bleeding collections together. So bleeding pre-fall and men’s together and the previous seasons together. You take snippets from previous collections and reaffirm them. It gets annoying when you do something and then someone does it the season after and then you don’t own it anymore.

PAULA GOLDSTEIN — Are you inspired by traditional iconography?
JONATHAN ANDERSON — Imagery and fabric are two things that really stimulate me. I usually build a really big, aggressive mood board, and I work on it with Benjamin Bruno, and we just look at loads of images, not necessarily as reference but more as mood stimulant. And then, from that, it’s straight to the fabric. You’re conscious of the images, but not knowing what they’re going to provoke in you. If you’re going to use mohair, use all mohair, or cut it in a way that feels dynamic, not flat. There’s always an element of craft in what I do.

PAULA GOLDSTEIN — Do you try to design clothes to have more meaning and relevance than say, simply being a jumper?
JONATHAN ANDERSON — For me, it’s like a diary. I think clothing is an emotional reaction to the people around you and to what you’re thinking in your head. I don’t think you really know why you dress a certain way until you look back on it. For me, it’s like the collection is a timeline of my own mind and my relationships.

PAULA GOLDSTEIN — And that creates the meaning?
JONATHAN ANDERSON — References come out of it. I’ve never gone out to design a collection based on Russia or a Fabergé egg or you know, like, the circus or a film. I feel like if you do that then you’ve trapped yourself in costume. Yes, it looks like something you can wear but ultimately the background of it becomes a costume.

PAULA GOLDSTEIN — I know that sometimes it’s been a struggle for you financially. How do you keep going every season?
JONATHAN ANDERSON — It’s extremely difficult. There are some seasons where you actually want to take all the clothing and cut it up. Or you have no idea what you’re doing 15 days before a show. It sometimes gets overwhelming when you’re doing all of it. I hope one day that some of that is relieved from me, you know, doing the books, the accounts, traveling around trying to promote the collection and also trying to have a personal life. But I’m not scared of hard work. And I know that whenever that moment’s to happen, it’ll happen. I think I’ve got another 10 years of extremely hard work and I want to dedicate myself to it.

PAULA GOLDSTEIN — Do you think print magazines are still important?
JONATHAN ANDERSON — They hold more relevance now. When I was starting out, all I cared for was seeing my work in print. Because it’s the object. You can pick it up. You can touch it. You can keep it. You can tear a page out, stick it on your wall. You can dream over it. I think magazines are about dreaming. Right down to the typography.

PAULA GOLDSTEIN — Do you have a muse?
JONATHAN ANDERSON — No. Honestly — this is probably the worst thing to say as a designer — but I hate the idea of designing for a specific individual. Clothing has to be relatable to everybody. I mean obviously there are men and women out there that I find attractive and inspiring. But for me, it doesn’t have to be a celebrity. People don’t need to know the names of the people that inspire you. But what’s the point of this whole industry anyway? It’s about doing things the way you want to. I think brands have to have secrets.