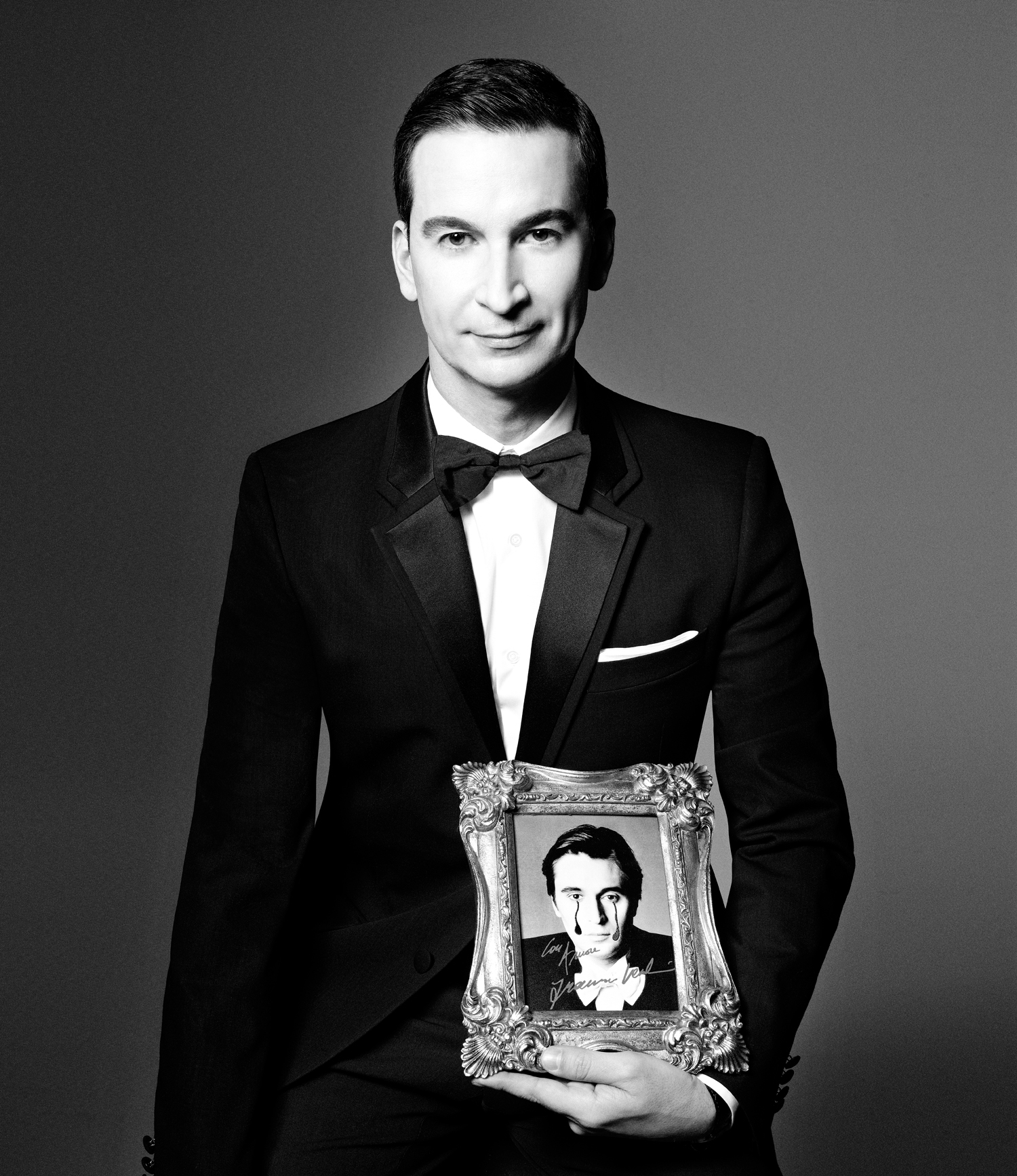 Federico Marchetti holds Con amore, Francesco Vezzoli (Francesco by Francesco), 2012, the proceeds of which will go toward helping the areas affected by the earthquake in Italy’s Emilia-Romagna region in May, 2012.

FRANCESCO VEZZOLI — The proposal you made me was a great and proper opportunity for me. It comes from our mutual and genuine love for Emilia-Romagna, which was hit by this massive earthquake. For you it’s a personal connection — you were born there. For me, that part of Italy played an important role in my childhood.

FEDERICO MARCHETTI — Where did you go?
FRANCESCO VEZZOLI — I used to go to Riccione, with my grandparents. For foreign readers, I should probably explain that Riccione was a bit like Ibiza — when I used to go it was the center of Italian summer nightlife.

FEDERICO MARCHETTI — Like a sort of Ibiza in Emilia-Romagna — Fellini’s Ibiza. On my side, I am from Emilia-Romagna. I left Ravenna at age 19 and have spent the last 24 years traveling the world, but I still have a little bit of the local accent, and frankly I don’t ever want to lose it. I still go back to my hometown every two or three months — it’s where my parents live and where my oldest friends are. I often think about what I could do to give something back to Ravenna. Sometimes I even feel bad for not having set up my e-retail company YOOX there, but logistically speaking it would have been impossible. Ravenna is far away from the rest of the world — the train takes an hour and a half from Bologna. Orders on YOOX arrive the next day; if we were in Ravenna it would take three days, which wouldn’t work. This project is like a small gift to Ravenna. When the earthquake happened, the first question I asked myself was what I could do to help out, something concrete. I sat down and wrote you. And I managed to convince you.
FRANCESCO VEZZOLI — I really couldn’t turn you down. I am bit nostalgic, and with all of these childhood memories tied up with that part of Italy. I remembered these postcards that I used to see when I was a child on holiday on the Adriatic Coast. I don’t even know if they exist anymore. They were super-camp, embroidered. When you asked me to create a work in a limited edition, as opposed to a one-off piece, I had no idea what object to create, because I had never worked in multiple copies before. I had to think of an object that was both precious but at the same time accessible. The embroidered postcard seemed the perfect thing. It made sense. So we produced a postcard with an embossed signature and embroidered details on a photo — a portrait taken of me by Francesco Scavullo, one of the most famous glamour photographers. Furthermore, the object may be mass-produced, but I wanted it to be framed in the most glorious and elaborate way, all the while maintaining a price that made sense for a work created for charity.

FEDERICO MARCHETTI — How do you feel about your face having been seen a million times on the internet? No, seven million times. Francesco by Francesco multiplied by seven million.
FRANCESCO VEZZOLI — I love the idea. As you know, I had never created a work in multiple editions. For me, the commercial and media aspects of an artistic project are a big experiment. We live in a moment when the extension and reach of art is an intrinsic part of the art itself. I am not at all nervous; in fact I’m really enjoying it. I thought it was funny that you asked me to “put my face” on the project, so I thought, why not put my face directly on the artwork itself? It is like taking responsibility for what you do.

FEDERICO MARCHETTI — One of the things that made me happy when we met was when you said to me: “At the end of the day, in Italy, if someone asks me to do something special, if I won’t do it for a young entrepreneur, who would I do it for?”
FRANCESCO VEZZOLI — Well, Italy is living in a difficult time. Italy is divided into two types of entrepreneurs. The old way is linked to the worlds of finance, industry, banks, and politics, linked to Rome, driven by people who once upon a time were the “powers that be.” The new type of entrepreneurship is more elastic and more international. It’s pretty obvious that the old guard is so out of date that it can’t renew itself. Fashion is the new aristocracy. The link between Art and Fashion that everyone is so concerned about is not a problem for me. The big fashion brands want to support art, and so be it.

FEDERICO MARCHETTI — My company is a website that was born with fashion, but now it has branched out into art. Unlike other fashion websites, we also sell artworks, with next-day deliveries in 101 markets.
FRANCESCO VEZZOLI — If you ask me, I would say that you should also use your website as a vehicle for interesting content. For example, I would call on important critics to write exclusively for your site, articles that people can only read there. If the website presents valid works by artists and maybe even helps them produce more ambitious projects, then your website would take a leading role and become a cultural vehicle, a bit like the Olivetti brand in the ’60s.

FEDERICO MARCHETTI — The example you cite is one that I often think about. Olivetti’s cultural strategy was definitely a great example. I think it is important to clarify that all the money will be donated directly to the Italian National Trust, Fondo Ambiente Italiano (FAI). I stress this, because you often hear people speak about net proceeds — which would mean €399, minus the cost of the frames, the cost of production, the cost of shipping and so on, and in the end you’re left with €50. In this case, we donate everything. It is an important investment for YOOX.
FRANCESCO VEZZOLI — Yes! One of the risks you run into when you do something for charity is that often it isn’t really clear how the funds are used. FAI is one of the most authoritative institutions in Italy figuring out how we can preserve Italy’s cultural heritage.

FEDERICO MARCHETTI — For both of us, the collaboration with FAI was quite simply the easiest and most effective way of ensuring that we reached our end goal.
FEDERICO MARCHETTI — It is part of the project’s authenticity… You decided that I would play the role of the retailer; you told me to decide the price and the quantity of the edition. You said: “I’ll create the art, you do the rest.” I wanted a “pop” price, something accessible for a larger audience. I liked the idea of an artwork by Francesco Vezzoli for €399.
FRANCESCO VEZZOLI — The price of a handbag!

FEDERICO MARCHETTI — A typical mass-market price, which is exactly the opposite of art as the ultimate luxury. Then I had the idea of an edition of 399. At the end of the day, 399 x €399 means giving €159,201 to FAI for Emilia-Romagna.
FRANCESCO VEZZOLI — We hope so.