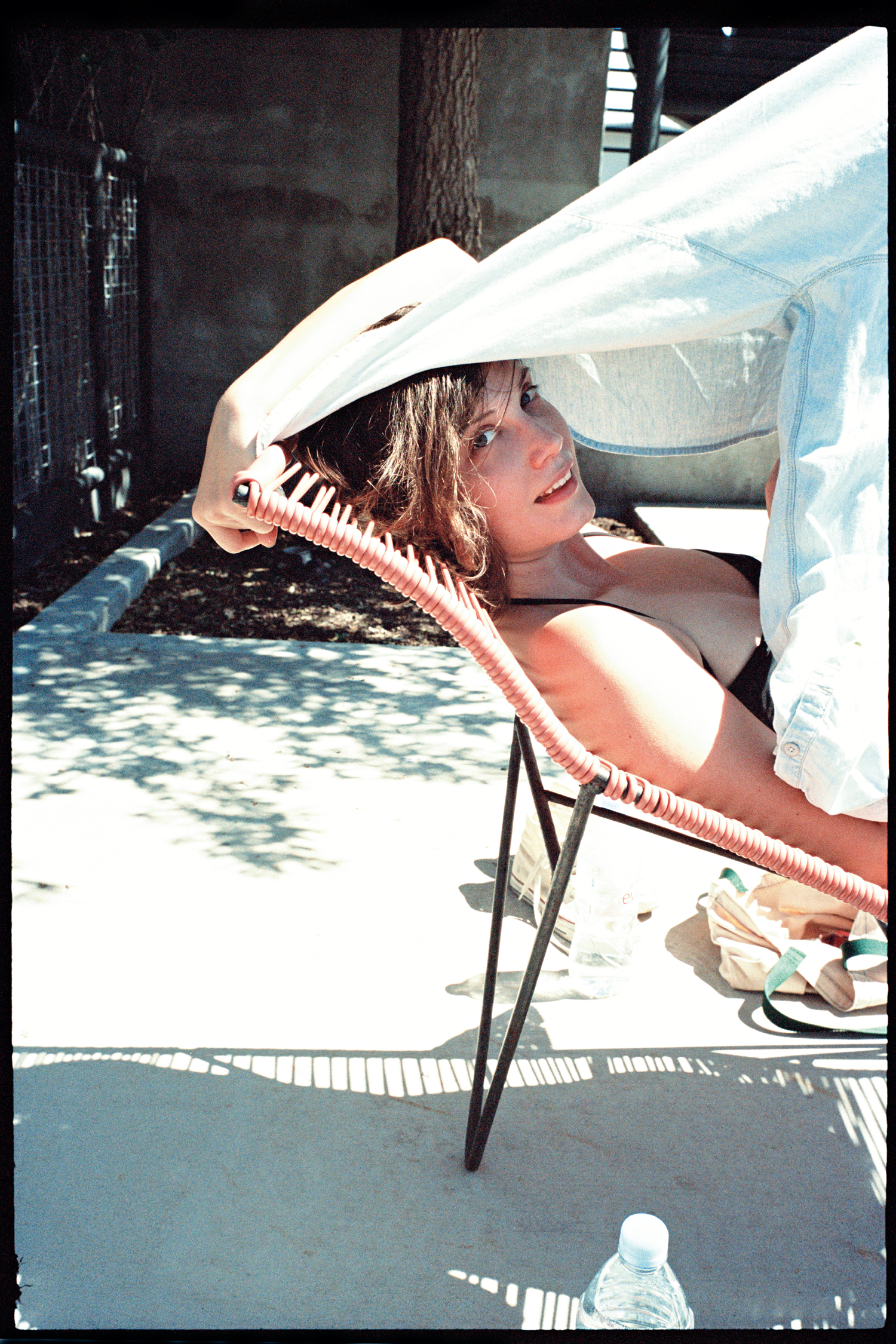 interview and portrait by ALEXIS DAHAN

Drake Brunette is the beguiling, long-legged lead of Larry Clark’s new film Marfa Girl. With a background in art history — not in acting — the 26-year-old Austin native planned on applying to graduate school until a spate of good fortune forced her to reconsider. After wrapping Marfa Girl, Drake moved to Brooklyn, signed with DNA Models and is following her star where it takes her.

ALEXIS DAHAN — So how did you end up working on Larry Clark’s film in Marfa?

DRAKE BURNETTE — Larry and I have a mutual friend named Jim Lewis who co-wrote the story for Kids with Larry. Jim and I were just e-mailing back and forth about books and then he was like, “Oh, by the way, this casting happened. I thought of you and you weren’t here, are you interested?” And I said yes. I guess they had cast somebody else, but for whatever reason they were not happy with her. It all happened in like 48 hours.

ALEXIS DAHAN — Did you know a lot about Larry Clark beforehand?
DRAKE BURNETTE — Yes. I’m not an expert on him, but I had seen all of his films, except for Another Day in Paradise. And I was familiar with his photography. I had a copy of Tulsa. I never studied photography, but I understood how he really changed what could be considered fine art photography. I was familiar with his themes of youth and innocence, and experience and tragedy, that sort of thing. I think he’s unabashedly interested in youth and revealing what are maybe ugly truths about youth — and also beautiful things about those ugly truths.

ALEXIS DAHAN — What are the beautiful things?
DRAKE BURNETTE — He just has an amazing eye. I find his work interesting because it looks good, but there’s more to it than just a beautiful boy or a couple embracing or something like that. I think he’s interested in relationships and that span of time when, as a youth, you don’t know everything but you’re excited and exploring, and sometimes there are consequences to that exploration.

ALEXIS DAHAN — What was it like working with Larry Clark?
DRAKE BURNETTE — I really enjoyed it. It was a really exciting and collaborative process, fleshing out the script that he had written and bringing it to life. I was able to bring in my own personal experiences to feed this authenticity that he was interested in. And I think that was one of the reasons that he cast me; I was familiar with Marfa. I knew people here and I’ve had experiences here, so I was able to bring that to the film.

ALEXIS DAHAN — What is your experience with Marfa?
DRAKE BURNETTE — I’m not from Marfa, but I feel very drawn to this place and very connected to it, so I’ve come here many times for music, for shows, for art, or just to get away. And so, through those experiences, I’ve gotten to know other people who like to come here, who come to visit. I’ve also gotten to know people who are actually from here. And so I know how sensitive it is to have this small community constantly have this influx of outsiders who come and leave. I understand the complications that arise when there are visitors that are often more well-to-do, who come here and are like “Oh, it’s so lovely.” But then there are the people who live and work here. Maybe they work in restaurants, maybe they come from a ranching family, maybe they just get by, and all these people are interacting with each other on a more intimate level just because the town is so small.

ALEXIS DAHAN — Why do you think Larry Clark chose Marfa?
DRAKE BURNETTE — I think it’s a two-part answer. A lot of people find the landscape stunning and very peaceful, and there is something magical about it. And then just the geographical location, being so close to the border, being in West Texas. Having this whole history of Texas culture, ranching and then the Judd Foundation. There’s a whole category of West Texas films that are all pretty radical and have been filmed in and around this area. I think it’s a combination of these things.

ALEXIS DAHAN — You are the Marfa Girl of the title?
DRAKE BURNETTE — That’s my character. She is an outsider who comes from a privileged place. She makes art and is very curious about the world, but she is also naive. Larry was really interested in her back-story. She comes from a hippie family, where she was encouraged as a child to participate in free love, but I think those ideas are, for her character and for her family, half-formed. She hasn’t thought it all the way through. So she’s sort of a naive feminist. Though she feels very strongly about actively pursuing a lifestyle that expresses her ideals of free love and art and all of that, she’s almost silly. But she’s also genuine and kind of lost.

ALEXIS DAHAN — Was there tension or drama on the set?
DRAKE BURNETTE — Considering maybe half of the cast were non-professional actors, myself included, there wasn’t very much drama. There were moments of awkwardness or misunderstanding between myself and a couple of other people, but those were quickly resolved. There was some drama because the town is so small, and once word got out that Larry Clark was shooting a film and people got on Google and figured out who he was, we lost some location possibilities. They didn’t want him shooting in their school and that sort of thing. But Larry was very focused. He’s really healthy. He had this compulsion to make this film and try to capture his impression of this town, because something captivated him there. It’s not like we were all raging back at Larry’s place at the end of the day. Everybody was pretty focused.

ALEXIS DAHAN — What was your favorite interaction with Larry?
DRAKE BURNETTE — On the third or fourth day, we shot my first love scene. And obviously I’ve never shot a love scene before. Everybody was like, “Phew, here we go.” Shooting started at like seven or eight in the morning, and so I had to get on set by like six. I’m not a morning person. It was cold and everybody was in a really bad mood. This was the vibe gearing up to shoot this scene that was supposed to be hot, you know, at like the ass-crack of dawn. I started my period that morning as well, and so I was just like, fuck, this sucks. Why am I doing this? I’m in hair and make-up getting ready and Larry comes up to me and says, “Hi, how’s it going?” I’m like, “It’s fine.” He could sense I wasn’t happy, so he asked, “How are you feeling about this?” I was like, “I’m feeling fine, I just want to get it done.” He was like, “OK, well, are you on your period?” And I was like, “How did you know?” And he was like, “You’re fucking kidding me.” And I was like, “No! It started this morning. I’m pissed about it.” He started laughing and launched into this story about how on almost every film he’d ever shot, the actress always started her period on the day they had to shoot the love scene. He went through several stories of different actresses starting their period and being bloated and having to deal with all of that, and so it was this lovely moment where he made me laugh and he was being really fatherly. It just made me relax.

ALEXIS DAHAN — What are the things that you would want to keep doing?
DRAKE BURNETTE — I’m figuring that out right now. Originally I thought I would go to graduate school, but now this has kind of made me reconsider it. I know the work I’ve done that has been the most enjoyable to me has always been a collaborative process with other people. It was either with friends or people who became friends. That to me is the most interesting and most enjoyable way to live and work.