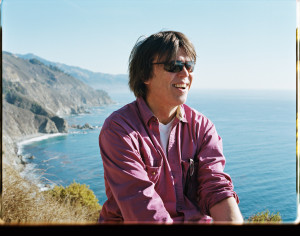 DIRECTOR OF THE HENRY MILLER MEMORIAL LIBRARY IN THE BIG SUR, CALIFORNIA
text by AJA PECKNOLD
portrait by ANNABEL MEHRAN

“A car turned out in front of me, I slammed into it. My body flew over the car only to land on the asphalt somewhere ahead. I have no memory of anything after that until I woke up, sprawled on the hood of the car I had just hit, my hand being held by a beautiful girl.”

A few of us are seated in the shadow of magnificent redwoods, nestled backstage in Big Sur, at California’s Henry Miller Memorial Library, passing the time before the evening’s acoustic performance by Ben Gibbard. Wine is being poured, fog filters in, and Magnus Toren, the library’s director, is holding court with yet another of his captivating adventure stories.

There’s a seemingly bottomless well of tales for him to choose from — but only one explains why this towering, shaggy-haired Swede has found himself implanted here, so far from home, where the San Lucia mountains rise high and jagged out of the blue Pacific. It has, naturally, everything to do with a girl. As he’s recounting, decades ago, Toren was cruising down this rugged stretch of Northern California coastline on a motorcycle without a care in the world. The next thing he knew, he was bloodied and battered, splayed out with a beautiful angel above him, holding his hand. He continues:

Toren ended up marrying his savior, Mary Lou, and has called Big Sur his home ever since. For those who haven’t been here, the ravaging beauty of this wild western stretch of the continental US is nearly ineffable. It’s a place that emanates the energy of healing, the promise of isolation, breathtaking beauty contrasted with deep undercurrents of difficulty and darkness.

The siren’s song of Big Sur has seduced many artists and writers to its forested cliffs, and the Henry Miller Memorial Library is filled with the works of those who have attempted to milk the muse of this Western coast. In the 1920s, Robinson Jeffers’ poems were one of the public’s initial introductions to this wild place, inspiring countless more. Jack Kerouac penned his novel Big Sur while bunking at Lawrence Ferlinghetti’s cabin. Orson Welles and Rita Hayworth impulsively bought their own cabin here while on a road trip. The coastline has been a respite for Hunter S. Thompson, Richard Brautigan, Henry Miller (who arrived in Big Sur following a prolific time in Paris, where he wrote Tropic of Cancer) and continues to attract many more, including this evening’s performer, Gibbard, who recorded One Fast Move or I’m Gone: Kerouac’s Big Sur, a collaboration with Jay Farrar, in 2009.

The library, which Toren spends his days (and many evenings) running, continues to encapsulate this very spirit. Since the library’s first outdoor show in 1994, it has played host to an endless stream of performances by musicians, artists and writers, from Patti Smith and Steve Earle to Flaming Lips, Animal Collective, Fleet Foxes, Joanna Newsom, Philip Glass, Arcade Fire and countless more. The space allows for a safe haven away from the traditional grind of touring, a place for artists to present their work under the night sky, on nature’s stage inside an amphitheater of redwood trees. On this night and every other night, the spirit of what drew Henry Miller and so many before and after him to this place is palpable. And what Toren says of Miller’s initial impression of these enchanting wilds rings true: “He thought he’d found paradise.”

1. SCRIABIN The Poem of Ecstasy

2. THE BEATLES All You Need Is Love