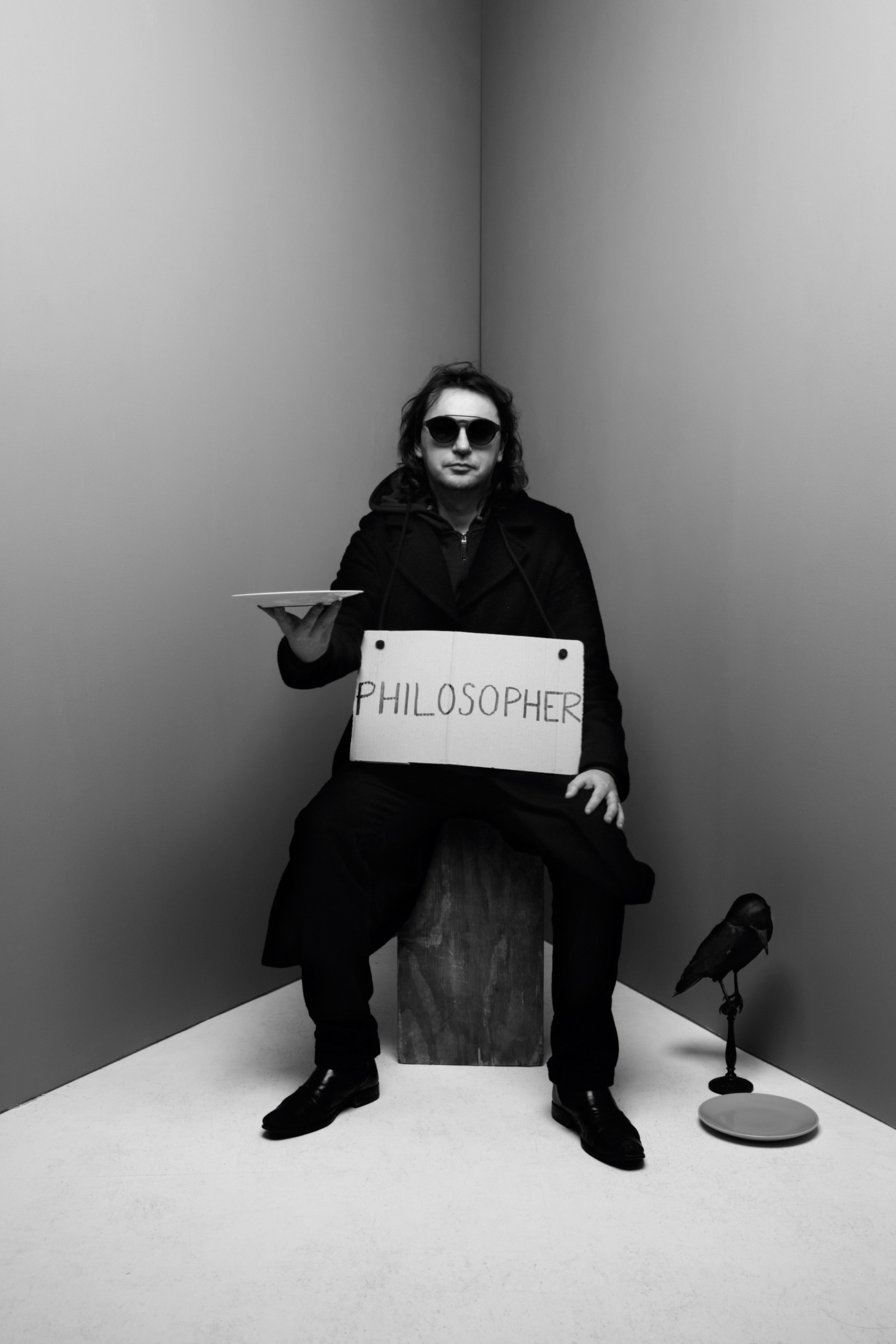 being JCM / being MBK

João César Monteiro, one of the most important Portuguese filmmakers and poets of the past 20 years, was photographed as a homeless man with his dog. He was 40 years old when the photo was taken. The dog’s sign says “cao” (Portuguese for “dog”). The filmmaker’s sign says “cineasta” (filmmaker).

Monteiro was homeless for long periods. The message of his life — that people must be allowed to create art in total freedom —  could be applied to filmmakers ranging from Erich von Stroheim to Philippe Garrel (who also spent time on the street, notably in Rome), and from Jean Vigo to Jean Eustache and Abel Ferrara. The French philosopher Gilles Deleuze described the history of film as being a martyrologue in which nine-tenths of the masterpieces had not been filmed, and that we (“we” in the Benjaminian philosophical aesthetic sense) must be satisfied with the existing traces of failures — that is, with the few films that have actually been made. Therefore, the more freedom we have, the more it must cost us.

In Les noces de Dieu (God’s Wedding), Monteiro claims, “You can make the corpse of a free man stink, but you’ll never turn him into a slave.” One could conclude that the fate of the great non-university thinkers is something very much like that of the legendary “accursed poets,” especially Hölderlin and Artaud, who are also considered real philosophers, as I am. Rousseau wandered the earth, devastated by the persecution he suffered because of his books. He was reduced to a state of mental homelessness. The stigma of non-university thinkers is like the “stink” of the bum. The university-affiliated philosophers — Kant, Hegel, Schelling, Husserl, Heidegger, and even the great post-WWII French academics — were all recognized during their lifetimes. Blanchot may not have been claimed by a university until he was 60, but his relationship to both life and death was so unique that he, too, must be included in this group. But the philosopher-bums have been ignored. Some academics made a big deal about Guy Debord, but they didn’t do anything philosophically: there is always a delay before even those like Kierkegaard, Marx, Nietzsche, Bataille, Benjamin, etc., are ushered into the sacred halls of the university.

The sacrifice of non-academics can be calculated: the more they are excluded by the university, the more the university feels called upon to claim them as its own, post-mortem. In theory, the continuing exclusion of the philosopher-bum should be assimilated into academic discourse, so mistakes aren’t repeated. But it isn’t because the exclusion is set up differently. Moreover, the unification of the planet allowed by technology has raised exclusion to a higher power. If we look at the philosophical currents that are à la mode (without attaching a negative connotation to this term), we see that the names Rousseau, Kierkegaard, Nietzsche, Benjamin, Bataille, and Blanchot are absent; this comes after the glorious era of academics like Foucault, Deleuze, Derrida, and Artaud, who were star attractions. Go read the nasty remarks about Rousseau, Nietzsche, and Bataille, and then read the little jokes and clichés used to describe Kierkegaard, Benjamin, and Blanchot. From my point of view, it’s compelling.

Consider filmmakers. Many, such as Hitchcock, Bergman, and Kubrick, were not bums, but it’s not the same situation. They were a bit academic because they related to philosophy; they learned to adapt; they were in on it, like Clint Eastwood is. When Godard said of Hitchcock that he was the only “accursed poet” who was successful, he was also speaking about himself. He declared that he was thrilled to have been successful and to have made “accursed” films. Out of the entire tradition of bum-dog filmmakers, Godard is the only one who made it out alive. Aside from the great “installed” filmmakers and the bum-filmmakers, the industry is all for entertainment. But speaking of philosophy, there’s nothing going on between the academics and the bums. Why is that? Unlike Art, which creates an object, or Science, which produces immediately usable results, philosophy aims too high to do anything socially. It’s a useless activity. Someone once said that philosophy is a “gratuitous luxury,” but then that someone was an academic, paid by the State. The same academic can ramble on and on about one’s distance from the State, one’s hatred of the State, and the decline of the State. As so often is the case with narcissistic academics, he doesn’t care to tell us how he gets his blood money.

Godard, like Sartre, was in favor of non-university philosophy, starting with Rousseau. Sartre himself was first an academic, but his novel Nausea was a bestseller, allowing him to escape the misery of the academic life. In fact, at the age of 30, the idea of being condemned to live the academic life actually made him nauseous. Godard was from an upper-class family, which may have helped him, even unconsciously. The two of them allowed themselves to be bad boys, bon vivant bums in their respective practices. All the others were either on salary — or forced to panhandle, as this photograph attests.

Rousseau’s success was his curse. His books were scandalous; they sometimes were burned. He said that as he became more successful, he became “accursed,” and that he would have rather had a simple life and never been famous. The first 20 years of his career consisted of constant persecution. The tradition he created, that of the great non-university philosopher, was destroyed by this persecution. He was rarely crowned with success. It’s the same thing with the philosopher-bums.

Kierkegaard created a scandal in his home country of Denmark by never going out. He would write all night — standing up, drinking cognac and coffee. He lived off his father’s inheritance until it ran out, and then he died. Marx was a special case, but throughout his life he was pretty much eating mad cow, while several of his children died of malnutrition. Nietzsche is the prototype of the “cao,” the homeless “dog” philosopher, the great yet “accursed” philosopher — except that in philosophy, as in film, “accursed” is just a romantic synonym for “non-university.”

Walter Benjamin, who killed himself at the age of 48, lived much of his life in seedy hotels; his sex life was mostly with prostitutes. Only Baudelaire, with whom he identified greatly, wrote as well about this kind of experience.

Guy Debord was more or less born to be a bum. Being a bum was his limitation, but also part of his genius, as he spent much more time trying to figure out how to live without working than he did writing. It’s too bad, since he would have been one of the few credible sources of non-Stalinian Marxism. But we must accept him for who he was. I can’t hold it against him that he thought more about living than about saving the world, for he still gave us a great deal.

In any case, there comes a time when the bum-thinker must make a decision. And here, like those before him, he comes to an impasse. To cut to the heart of this miserabilism: can one choose between a bum’s misery and that of an academic? Thinking makes you happy. Making a terrible sacrifice during one’s short time on earth can mean the reward of a singular adventure. All in all, we must admit that academic misery is more comfortable than the martyrdom of the dog-philosophers. But to live a life of complete freedom and poverty can also be rewarding.

I realized I’d hit my limit the day I found myself on a television show with an audience of a million viewers. I had ten euros in my pocket, which had to last me for a week — in Paris. The kind of anecdote you find in certain book-jacket bios — I could list a hundred of them — shows how organized exclusion persists and is repeated. But nowadays the ordeal of the free philosopher won’t be like that of Rousseau, Kierkegaard, Benjamin, and Blanchot, and it could continue for much longer.

He who loves life must decide to live two lives — to break the poetic contract and convert to the prose of the world, to work for the university, or in journalism, or even in some kind of administrative department. In fact, there has never been a direct conflict between academics and non-academics. The government functionary recognizes the poet, and vice-versa. As Blanchot once famously declared, “The philosopher can no longer avoid being a teacher of philosophy. Kierkegaard will engender a line of great academics.”