in 2023, the stargazing eccentric japanese billionaire and art collector will complete a six-day loop around the moon on the inaugural tourist flight of the spacex starship. he’s also buying the tickets for a handpicked group of creatives particating in his art project #dearmoon

EMILIEN CRESPO — How did you start your e-commerce company?
YUSAKU MAEZAWA — In May 1998, I was a musician, a drummer [in the punk band Switch Style]. I also was a collector, buying a lot of hardcore and punk rock music through mail order, rare records from all over the world that you couldn’t find in Japan. My friends started asking for them, so I started procuring records for them — and for fans attending my concerts — which turned into a business. Then it spread nationwide. That led to the foundation of the company 20 years ago, when I was 23 years old. Today, it’s transformed into the biggest online fashion store in Japan.

EMILIEN CRESPO — Where did your passion for space come from?
YUSAKU MAEZAWA — Since elementary school, I’ve always loved looking up at the sky and the cosmos, stargazing. During that time, there was Halley’s Comet [in 1986] — it only comes once every 75 years. I watched it through my telescope.

EMILIEN CRESPO — In Japan, there’s a moon-viewing festival, Tsukimi. What does the moon symbolize for Japanese people?
YUSAKU MAEZAWA — It depends on the individual. One of the traditions that has existed for hundreds of years is enjoying drinks under a full moon. Many pray to the moon — for a bountiful harvest, for instance. Do I? Absolutely not! [Laughs]

EMILIEN CRESPO — So, what made you wake up one day and decide: “I want to go to outer space”?
YUSAKU MAEZAWA — I’m an adventurous person by nature. So, when I go on a trip, I want it to be an adventure. I was one of those little boys who would watch The Goonies or Indiana Jones movies and have strong aspirations for that kind of adventure — that hasn’t changed, even as a grown-up. I don’t want to go to places people have been to before.

EMILIEN CRESPO — How did you first meet Elon Musk?
YUSAKU MAEZAWA — A travel agency in America that receives requests for space travel introduced him to me. The first thing they recommended was a trip to the International Space Station. Seven or eight ordinary people have gone into space already, so they asked if I wanted to be the eighth or ninth. I said, “No,” because I wanted to be the first one. Then they came back with another proposal: how about a trip to the moon? I would be the first moon tourist if I went. So, I said, “All right, sign me up.” And that’s how it all started. I was talking to this Russian competitor, Soyuz, for a while, but the talks did not advance fast enough. I asked the agency if there was another way. SpaceX came to us with a proposition to go the moon faster than the Russian contact, so I decided to go with them.

EMILIEN CRESPO — What do you like about Elon Musk?
YUSAKU MAEZAWA — First of all, as a businessman, he’s very passionate about what he does, but he’s also very well versed in the technology as an engineer himself. And that’s why I trust his knowledge regarding safety. It gives me assurance. I also feel we have things in com­mon. I have great empathy for him because he’s not your cookie-cutter CEO straight off an MBA. He has a very smart brain. He’s the type who knows everything about the technology, on a level with the team on the ground, every single detail about the engineering. I think I’m the same. You might have seen the picture where I’m riding on his shoulders? That’s proof of trust! [Laughs]

EMILIEN CRESPO — Do you know what training for the trip will involve?
YUSAKU MAEZAWA — I heard that the training program lasts only about one month. That’s all it needs, but I’ve not received any of the details yet.

EMILIEN CRESPO — As a musician, what music would you play in the spaceship?
YUSAKU MAEZAWA — I love Radiohead. I like space-y/tech-y kinds of music. I’m still thinking about it… It’s a lot of pressure to be the one selecting the music for everybody in the spaceship.

EMILIEN CRESPO — You’re bringing artists and musicians. Are you going to bring your drums, too?
YUSAKU MAEZAWA — I don’t know if we can all play music, but we want to do something together. I’m still working it out — maybe singing, dancing, or something else.

EMILIEN CRESPO — We’re at your home surrounded by your collection, so let’s talk about art. How did you get into collecting?
YUSAKU MAEZAWA — My passion for art started over 10 years ago, when I was moving to a new house and started wondering what to put on the walls. My mindset is such that I always want things to be completely unique, so I ended up choosing paintings that were unique. The first expensive piece of art that I bought was by Roy Lichtenstein — I think it was from 1972.

EMILIEN CRESPO — Since you like unique things, do you also commission art?
YUSAKU MAEZAWA — Rarely. I go through primary and secondary markets, like auctions. I usually just buy what the artist or the gallery has.

EMILIEN CRESPO — It seems from all the art here that this passion is an addiction. Is the plan to share the art you own with the world?
YUSAKU MAEZAWA — It’s almost an addiction! I actually already do that — the Basquiat piece, which is very expensive, I’ve loaned out to museums all around the world, which have exhibited it on my behalf. And I have this contemporary art foundation where we do exhibitions several times a year, not just with the expensive pieces, but also with student artists.

EMILIEN CRESPO — Do you have an update on which artists you intend to take to the moon?
YUSAKU MAEZAWA — There’s nothing to share so far. But when you talk about which artists to take with me, it makes me think even more that every person on earth is an artist. I’m going to keep thinking about it. It might be interesting to maybe do a public vote, at least partially.

EMILIEN CRESPO — You’ve already invited Damien Chazelle, director of First Man and La La Land, no?
YUSAKU MAEZAWA — It was kind of a joke. He said he’d have to ask his wife!

EMILIEN CRESPO — Once you return, the plan with #dearMoon is to create artworks. What will that involve?
YUSAKU MAEZAWA — It depends on the artists. Omakase! [It’s up to them!] It would be interesting if we could create a piece of art together.

EMILIEN CRESPO — What is the biggest problem the world is facing right now?
YUSAKU MAEZAWA — I feel very strongly that peace and changing people’s mindsets are the very first challenges we should tackle. Environmental issues are something we can think about once there’s peace. Peace and harmony are something that we need urgently to fix first and foremost.

EMILIEN CRESPO — Is it important for you to have a message, and not just go to space for the sake of it?
YUSAKU MAEZAWA — I am thinking about the kind of message that I would like to disseminate to the world about the meaning of why I am going to the moon. It would be about peace because that is what I am most concerned about. But if I were to leak it to you now, it wouldn’t be interesting.

EMILIEN CRESPO — How many trips will you do?
YUSAKU MAEZAWA — There will be a second trip. And there might be a third trip, too, because I’d like to do the moon landing next. And then I would like to go to Mars. So, that’s three. Keep on challenging, more and more. I’m pretty sure that if I go once, I’ll be thinking about doing it again. Because we can reuse the spaceship over and over again.

EMILIEN CRESPO — How expensive is the trip?
YUSAKU MAEZAWA — That remains undisclosed.

EMILIEN CRESPO — But you will spend quite a lot of money to go to space, at a time when the planet is really suffering, so what is your ultimate goal?
YUSAKU MAEZAWA — I would like to change people’s mindsets. That’s my goal. Because people somehow know that peace is important, but I really want people to reaffirm the notion that peace is necessary. What I am thinking is that if people’s mindsets really change, the way they communicate will also change.

EMILIEN CRESPO — Are you familiar with the Whole Earth Catalog?
YUSAKU MAEZAWA — Yes, I’ve seen it before. I want one.

EMILIEN CRESPO — We can find a copy for you. Its founder, Stewart Brand, wanted people to see the first photo taken of Earth from space — it had not yet been released by NASA — so that they would change their minds about how they see space. They would see their problems not as being individual problems, but as bigger issues. Is that similar to what you are looking to achieve?
YUSAKU MAEZAWA — Yes, it is.

EMILIEN CRESPO — How is Japan reacting to having one of its citizens doing this?
YUSAKU MAEZAWA — The grown-ups are still skeptical about whether I will actually do it. I don’t think they understand that it could also happen to them. But the kids are different. Even my kids think that it’s obvious that you can go to the moon. “Why not?” they think.

EMILIEN CRESPO — You were a musician, then an entrepreneur, and now a space explorer. You seem to have a very different, dreamer mindset. Have you always been like that?
YUSAKU MAEZAWA — Whatever I do, I think about dreams, freedom, adventure, challenges… I am really worried that when I come back to Earth, I will lose all my motivation to live here on this planet. Think of all the things we are doing — it’s all so trivial. I may lose my drive.

EMILIEN CRESPO — Maybe you could build a house on Mars?
YUSAKU MAEZAWA — That would be great. Next time! 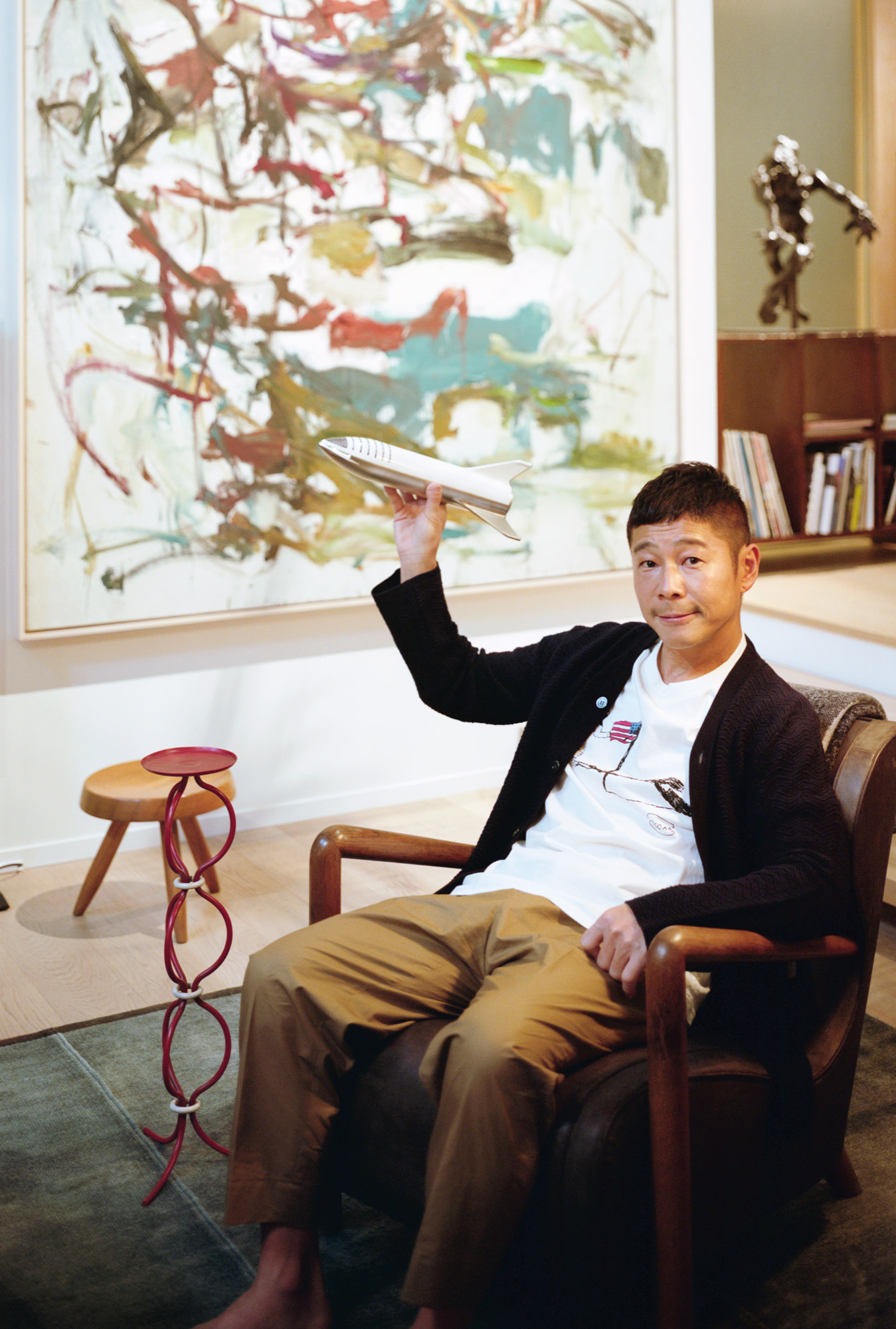 YUSAKU MAEZAWA HOLDING A MODEL OF THE SPACEX STARSHIP 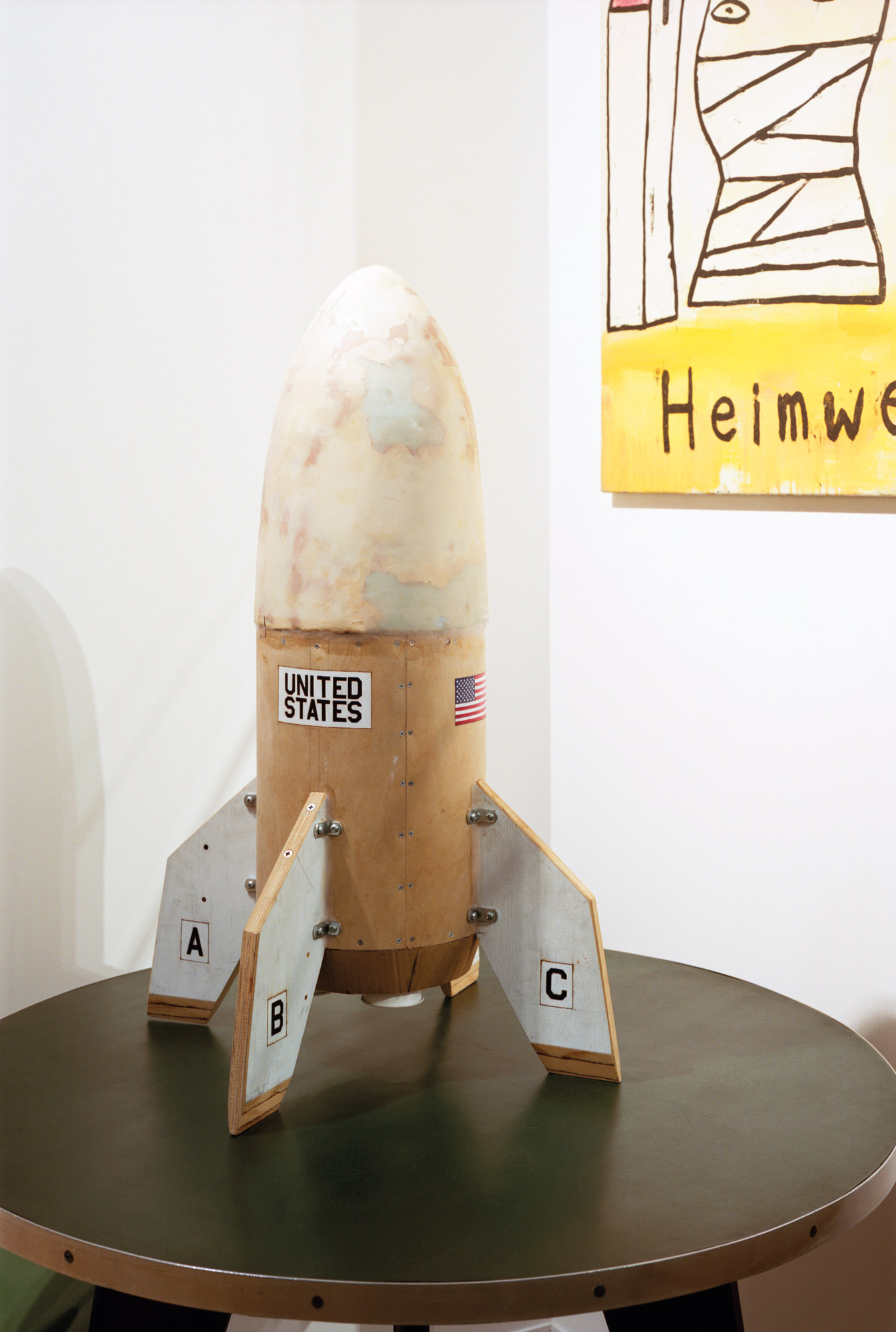