an interview with jordan kahn

in a high-tech building in los angeles, the brilliant young chef and mastermind behind vespertine offers a radical and esoteric dining ritual, transforming cuisine into an unprecedented immersive artwork

OLIVIER ZAHM — What you do is a very unique form of cooking. Generally, we see cuisine connected with tradition.
JORDAN KAHN — It’s all rooted somewhere…

OLIVIER ZAHM — Exactly! We like new associations, but coming from a base… But you don’t start from any tradition.
JORDAN KAHN — No. It’s hard to talk about the cooking without talking about the project as a whole and the process of how it came to be. It grew and was alive and manifested itself in various ways, which is why we integrated different people, and then it shifted. It’s very much a living organism.

OLIVIER ZAHM — Is pure innovation in cooking something that people accept?
JORDAN KAHN — With the pioneers, like Ferran Adrià [of El Bulli], people have to have some sort of reference to be able to understand it. How we went through putting this together was very insular. I worked with Eric Owen Moss and his architects, and different artists, and I removed myself from the kitchen. I was the only one from a restaurant working on the whole project, and getting their perspective changed my way of thinking. Very early on we realized that we weren’t building a restaurant — we were building a world. And in this world we needed a language, citizens, music, culture, and arts. And we needed food.

OLIVIER ZAHM — It’s a holistic project. Also, the plates are incredible, the silverware… everything.
JORDAN KAHN — Everything is bespoke. The movements, the way that we speak, how we serve something, the garments, the scent: everything is the result of an artistic decision.

OLIVIER ZAHM — You wanted to connect everything? And also change the experience of a restaurant. Because it doesn’t really exist, or does it?
JORDAN KAHN — Not really.

OLIVIER ZAHM — So, you’re unique — you’re a solitary planet.
JORDAN KAHN — [Laughs] The goal was to create something unique, but for the majority of us working on this, we didn’t know what the final product was going to be. In a lot of ways, we were reacting to what the project was telling us it needed. Everything in this place exists only because it must — there’s nothing superfluous. In the true spirit of minimalism, everything that exists here weighs 10 times more. When we put a water glass down, that’s a moment.

OLIVIER ZAHM — There’s definitely something minimal, but also ritualistic, maybe?
JORDAN KAHN — One hundred percent. The meta-concept was “dining as ritual,” creating a ritualistic environment: different cultures and what their references, practices, and methods are, and how that interacts with humans, and how certain different elements make you feel a certain way. It’s very amorphous. For every guest who comes in, things affect everyone differently.

OLIVIER ZAHM — You forget your references. The restaurant is called Vespertine, so you enter a black zone.
JORDAN KAHN — [Laughs] It’s something that comes alive in the evening.

OLIVIER ZAHM — It’s beyond cooking.
JORDAN KAHN — One hundred percent. Most people go to restaurants for the food — but the food isn’t what sticks in their memory. When you have a truly memorable experience, it’s an aggregate of the entire journey. It’s like a great film — one scene is not more important than another. What you remember the most is the emotionality of the experience. Food is but one
of many aspects. Otherwise, I might’ve just opened a tasting counter.

OLIVIER ZAHM — At the same time, your dishes are exceptional. And they’re elaborated in relation to the shape of the plates, right?
JORDAN KAHN — We start with a primitive shape because it roots us in the earth, in terms of our fundamental understanding of objects. All of the black vessels are made by a local sculptor and potter. We designed these things together for those specific ideas. And it can contrast nicely with the food component — which can be a lot more expressive. Often, changing the context or creating a juxtaposition will give the impression that something is very odd or highly unusual, even if it is something as basic as a radish.

OLIVIER ZAHM — There’s the one where you have the radish, and then you go deep inside and find some eggs. That’s a food experience in volume.
JORDAN KAHN — [Laughs] The trout caviar.

OLIVIER ZAHM — How do you work with texture? There’s a lot of contrast, or tension, when we experience your food.
JORDAN KAHN — Right. That comes from my background as a pastry chef. Pastry chefs tend to play with their food, and they like texture: nougatine tuile, ice cream, crème montée… A classic French mille-feuille is a perfect dessert. And there are only three components, but it tastes like there are 10. You have the pâte feuilletée, which is caramelized, the crème patissière, which is mounted, and then some fruits. But when you eat it, your brain is telling you that there’s a lot more going on. I think that my food attempts to go in that direction.

OLIVIER ZAHM — How do you create a new dish? Do you start with an idea? Or with a sensation?
JORDAN KAHN — Sometimes they’re inspired by a concept — the radish dish is conceptual, and then we apply the shape, and the ingredients come last. Other times we start with the ingredients first and work our way backward. Some were inspired by a shape — and then we make a vessel. There are a couple of new things that we’re working on. I can show you a photo of something that we used to do. We’re modifying a version of it. [shows photo] This is a monolith. It’s only the size of my phone — this small, like a toy. It’s made of concrete and weighs almost three pounds. It has a small notch in the center taken out. And we replace that notch with a piece of food, which is required to complete the shape of the monolith. There’s another one that’s similar [shows photo]. The piece is also made of concrete, it’s faceted. And then we created a shape that’s 3-D, so it comes out — like a diamond, it’s elongated. And this is cream of hazelnut that’s dipped in carob, and then we dust it with anise hyssop powder.

OLIVIER ZAHM — Is it a dessert?
JORDAN KAHN — It’s a transition.

OLIVIER ZAHM — The really interesting surprise is the disruption of perception or sensation. But it’s also visually beautiful. The dish is to be contemplated. Everyone’s taking pictures.
JORDAN KAHN — I’ve had the conversation regarding food and art many, many times. I don’t really consider my food to be art. I do, however, think that Vespertine, as a whole, is an art piece.

OLIVIER ZAHM — Like an installation?
JORDAN KAHN — Precisely. And, as with art, everybody’s affected differently. There are going to be people here who don’t experience the things that we want them to, in terms of the degree of emotional connection. But for others who’re able to get more out of it — that meta-concept we talked about — there’s a lot here that people will take away with them. Chefs tend to be really impacted because they’re inherently quite sensitive.

OLIVIER ZAHM — Have you ever been approached to do an exhibition?
JORDAN KAHN — It’s funny you should say that. About four weeks ago, I was in Montpellier [France] doing an exhibition called “Cookbook,” which involved 25 chefs and 20 artists from all over the world. The idea was that every chef would go there and make an installation — whatever they wanted. No cooking, just make art. I made a meditation sound-and-bath video installation. We filled the room with dried leaves and branches from the redwood forest floor and had misters that diffused a redwood distillate fog. On the ceiling was a video projection. We had music going, as well. The whole room was blacked out, and we had yoga mats on the floor, so you could lie down on the dry, textured earth. It was quite meditative.

OLIVIER ZAHM — You create edible sculptures because what you do is a combination of everything: form, image, sensation, and a moment in time. There’s no difference between what you do and what a contemporary artist does. Except that it disappears! [Laughs]
JORDAN KAHN — That’s the cool part: you get to destroy and eat it.

OLIVIER ZAHM — As opposed to it ending up in a bank or in storage. [Laughs]
JORDAN KAHN — Exactly. Eating is extremely intimate, literally consuming the energy of other living things.

OLIVIER ZAHM — Like meditation?
JORDAN KAHN — Absolutely. We rarely take the time to reflect on the actual process of eating.

OLIVIER ZAHM — Are there any other chefs whom you like?
JORDAN KAHN — Oh, yeah! The older I get, the more appreciation I have for other chefs and for diversity. When I was in Montpellier, I met Chef Riccardo Camanini from Lido 84, and he is one of the kindest souls I’ve ever met. He made this beautiful installation at the Montpellier event, a giant ball of mozzarella… I’m also super-inspired by people like René Redzepi [of Noma] and Albert Adrià, but my mentors are Grant Achatz, from Alinea in Chicago, and Thomas Keller, from the French Laundry in California and Per Se in New York.

OLIVIER ZAHM — Just to go back to the beginning of the conversation because I like esotericism a lot, and alchemy: are you not influenced a bit by such things?
JORDAN KAHN — Not really…  Esotericism and the occult are super-interesting to me, but I don’t know that they’re part of my process. But when you have everything combined together, as in this ritualistic dining that happens at night, and all of the materials are made of this black lava-type material, and the shapes are very defined, it seems that there’s some associated symbology…

OLIVIER ZAHM — In the universe of esotericism, there are always two forces: there’s a good force and a bad force, there’s a passive element and an active element. In esotericism as well, there’s always a conflict between at least two elements.
JORDAN KAHN — We do approach things with a sense of contrast, the sound and things being very gentle and passive, but the seats are made out of steel and have sharp edges.

OLIVIER ZAHM — How did you choose this building?
JORDAN KAHN — When I first discovered the building, it was a construction site. And I’d break in at night, at three o’clock in the morning, I would just go over the fence. This glass wasn’t here — it was plywood, so I’d take it off. I’d wander around this place for an hour or two every night. I did
that almost every day for six months.

OLIVIER ZAHM — To feel the energy of the place?
JORDAN KAHN — Yeah. Without sounding cheesy, there was a gravity that was pulling me here. There was a moment I was on the roof, with my headphones, just sitting and feeling the space and the energy, and there was a full moon. The song that I was listening to had this particular quality, and I was like [snaps fingers]. I felt electricity in my fingers. It was fucking magical.

OLIVIER ZAHM — Wow! On that note, did you also work on the music for Vespertine? In most restaurants, it’s really annoying. Yours is really peaceful, and you can forget about it because it’s not aggressive… but you can go back to it.
JORDAN KAHN — I describe it as being close to the ocean. You hear the waves immediately, and then the sound seems to retreat, and you forget about the waves. When your attention shifts, suddenly you hear the waves again. 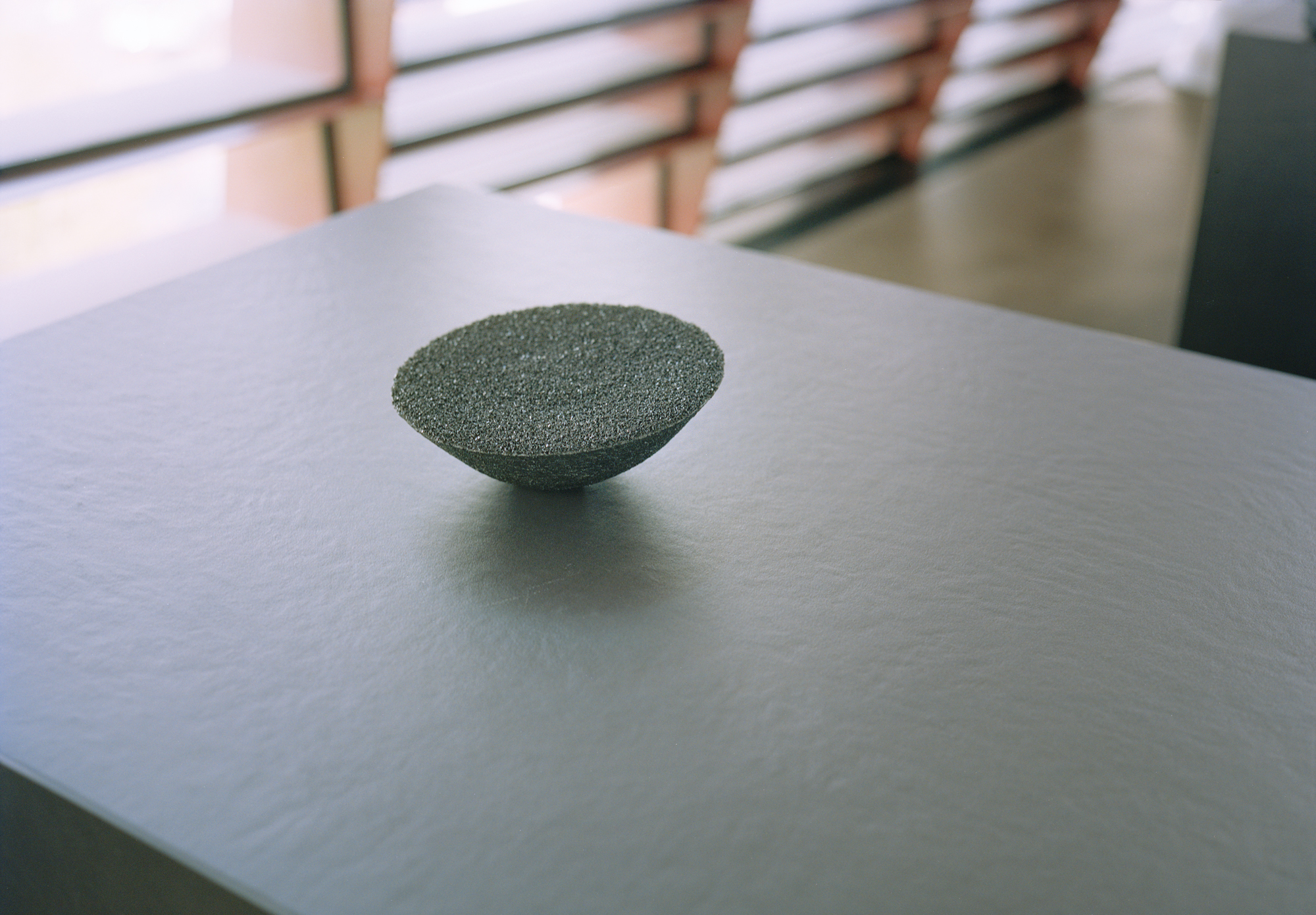 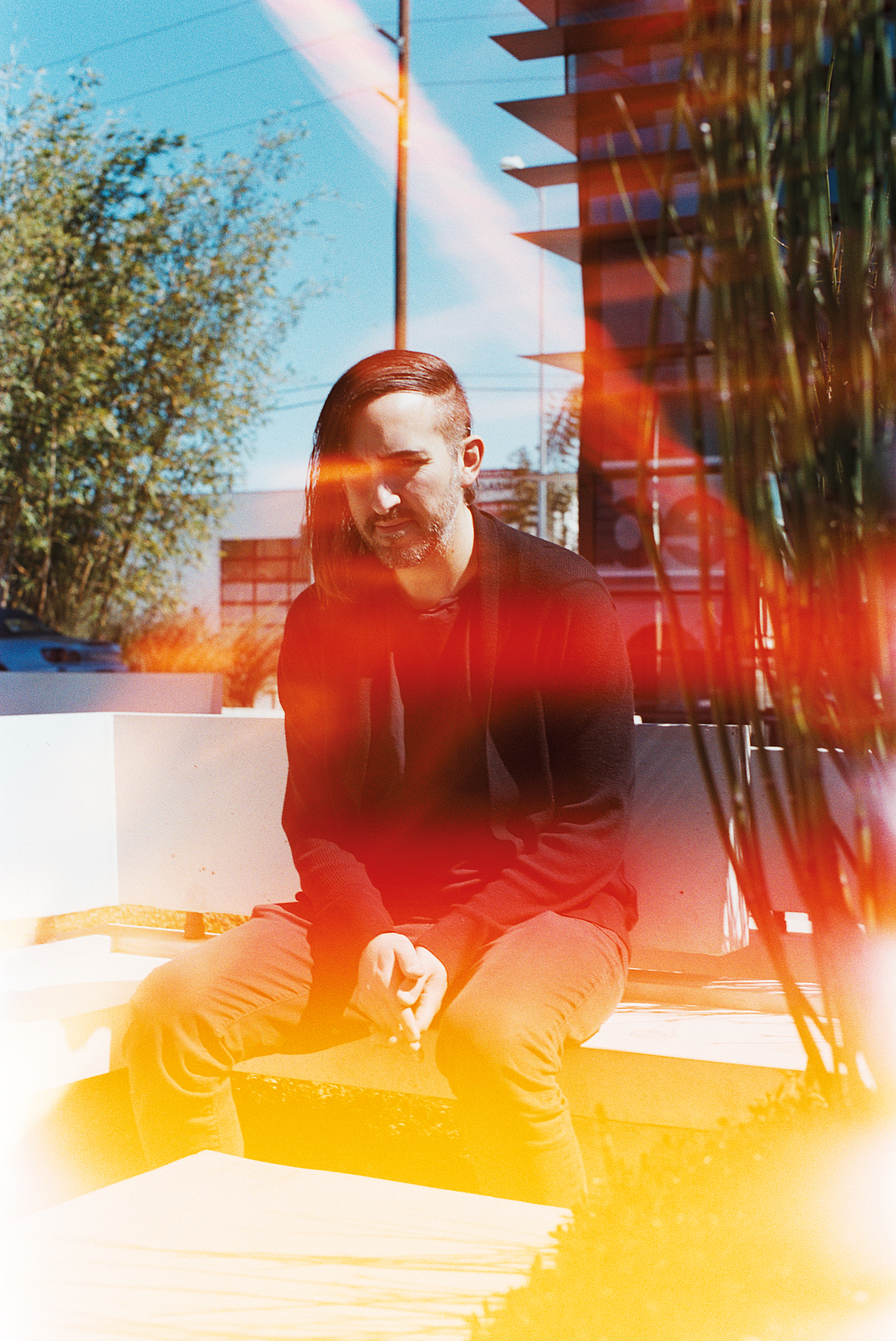 JORDAN KAHN IN FRONT OF THE VESPERTINE BUILDING IN CULVER CITY, LOS ANGELES 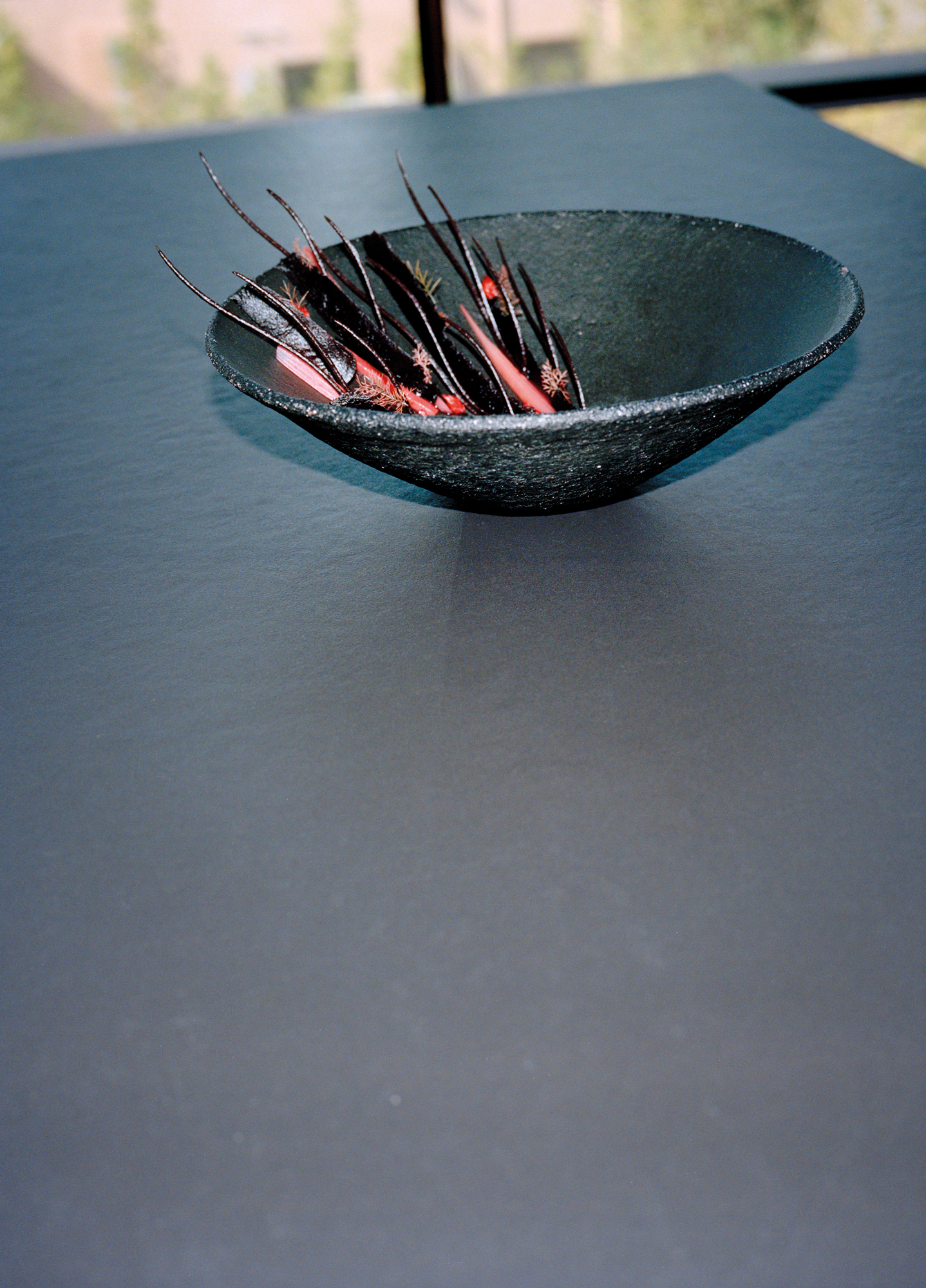 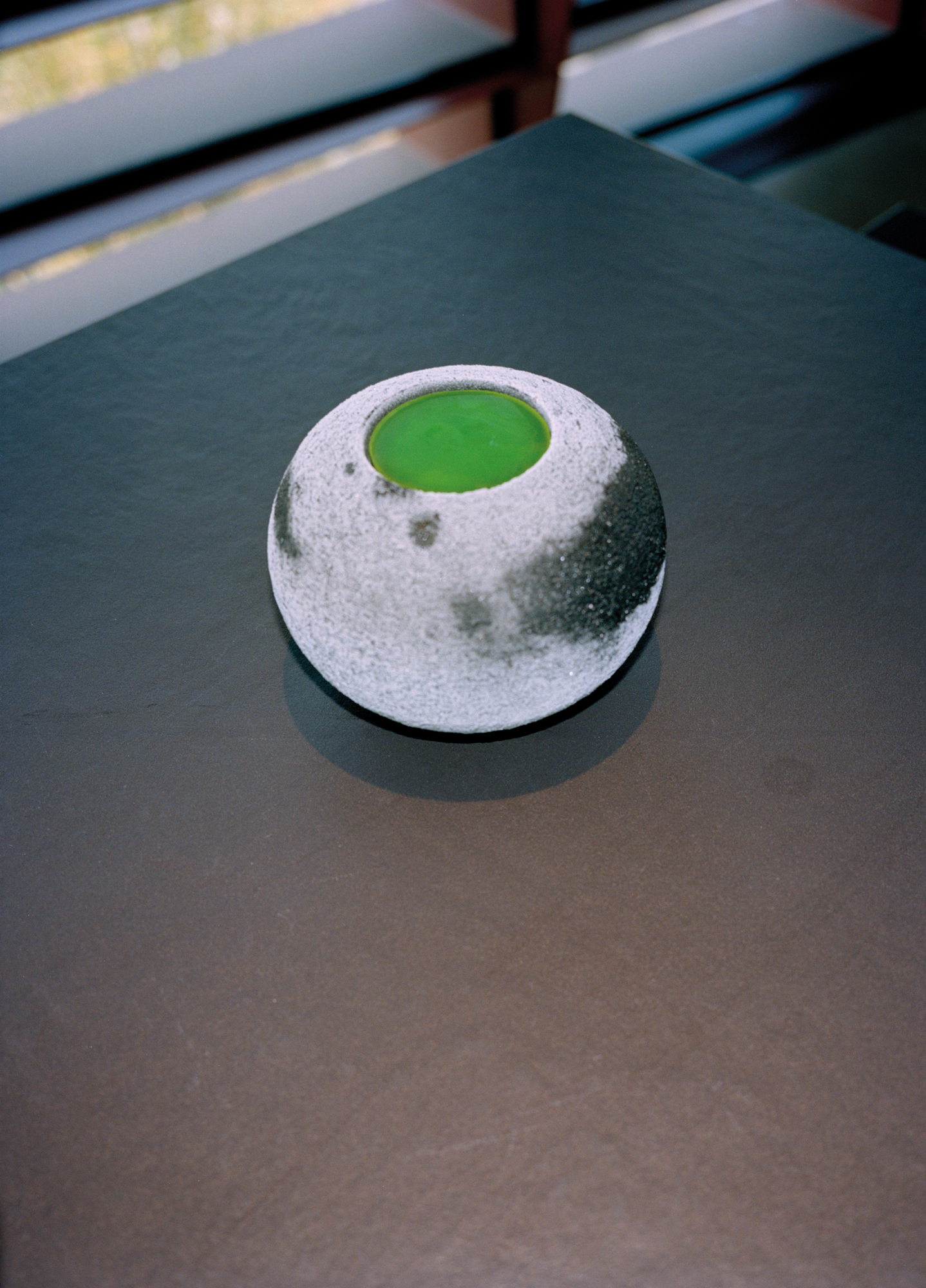