harnassing fire and earth, the la-based artist moves away from the naturalist world of ceramics into elementary geometric systems

OLIVIER ZAHM — So, your first job in ceramics when you arrived in LA was with Heath Ceramics?

ALEX REED — Yeah. I’d admired Heath since I was 18, and I loved working at the company.

OLIVIER ZAHM — Is it a typical California story?
ALEX REED — Yeah, it was started in the ’40s by Edith Heath, in Sausali- to, across the Golden Gate Bridge from San Francisco. The demand became too much for her to meet by herself, so she slowly started this company, and it came to be the prototypical modern aesthetic for ceramics in California.

OLIVIER ZAHM — In the ’60s?
ALEX REED — It started in the late ’40s, but became a real business in the ’50s and ’60s. She was the designer, the CEO, everything — all until her early 90s, and then she sold it at the end of her life to a couple of industrial designers, and they revived the company.

OLIVIER ZAHM — With a subtle sense of color?
ALEX REED — Yeah. Very sophisticated glaze work. Outside of Russel Wright, it was one of the few real American dinner ware companies.

OLIVIER ZAHM — How would you define modern ceramics?
ALEX REED — Strictly functional, comes from the Bauhaus, all about functionality, aesthetics, durability, no ornament — about utility and service.

OLIVIER ZAHM — So, how did you get involved in ceramics? You studied art, right?
ALEX REED — Yeah. I went to art school and did photography and ceramics. And the energy in the school was really centered around the ceramics program.

OLIVIER ZAHM — Was that in New York?
ALEX REED — Yeah, at Alfred University. It has a historic ceramics program. I took a class called “Art as Industry,” and it was amazing! It was the first look that I really had at industrial design, and I saw that creativity can exist outside of the stereotypical artist’s studio — in the commercial world, and in production and design. So, I had this idea after college that I didn’t really want to just work by myself. I wanted to work for a company to pay the bills and learn technical knowledge.

OLIVIER ZAHM — This nondivision between art and functionality is a modernist tradition — it comes from the Bauhaus, where artists got involved in everyday life.
ALEX REED — Yeah. And to me, the intersection of design, business and culture is much more interesting than a white-box gallery.

OLIVIER ZAHM — So, you were working at Heath Ceramics near San Francisco?
ALEX REED — Well, they have a design office and a store in LA, so I was based in LA, doing some experimental projects and collaborations. It was hard because it was my dream job. When I was 22, I was, like, “Oh, that’s where I’d love to end up. Maybe one day.”

OLIVIER ZAHM — And you started from there! [Laughs]
ALEX REED — Yeah! And so it was kind of a mindfuck.

OLIVIER ZAHM — So, the next step was…
ALEXREED—I had two choices: either stay at Heath and get a salary and a 401(k) [retirement plan] and have a comfortable middle-class life — or continue to grow and be challenged and work it out on my own. And I decided to do that.

OLIVIER ZAHM — The first element we notice in your work is all the industrial tubes or pipes. Where does this obsession come from?
ALEX REED — When you’re on a potter’s wheel, the first thing you train to make is a cylinder, so everything you make starts off as that, and then you add volume to it, to make a vase or a pitcher. The cylinder is very impor- tant in ceramics, tradition- ally.

OLIVIER ZAHM — But it’s never really regular. You do it more like an industrial type of…
ALEX REED — Right, exactly. My challenge to myself is: “How do I make ceramics in a way that isn’t immediately tied to the history of craft and throwing on the wheel?”

OLIVIER ZAHM — And the hand quality, no?
ALEX REED — Yeah, exactly! There’s a concrete lineage of people working off of the wheel, making beautiful work, but I want my work to be different from that lineage… I developed this technique through working in industry. I cut out a half-circle of acrylic, then I cut out the footprint of the piece and pour plaster on it. Then I run that half-circle of acrylic around it, and it creates a beautiful plaster extrusion that I make two of and put together. I then have this perfect plaster model. I take a mold of that model — so, it allows me to cast these perfect pieces of geometry that would otherwise be impossible to make.

OLIVIER ZAHM — It looks perfect but also has the human quality of ceramics, or the randomness. Because you can’t totally control ceramics. It comes more from an industrial context, right?
ALEX REED — Yeah, definitely. Maybe it’s part of a car or part of a building.

OLIVIER ZAHM — So, you developed different, more mathematical geometric forms?
ALEX REED — Yeah. There are these things in math called minimal surfaces. [Gestures to objects] These three are minimal surfaces. And it’s the surface that’s described when you move a piece of wire through a soap solution. The resulting surface is the absolute minimum to span all of this distance.

OLIVIER ZAHM — And it comes from bubble structures?
ALEX REED — Yeah. There are maybe 12 different minimal surfaces that tile in three dimensions. Each one has its own mathematical equation.

OLIVIER ZAHM — So, that’s a serious challenge. You have to deconstruct the surface and reassemble it?
ALEX REED — Yeah, I use a computer program to describe this mathematical surface, and then I 3-D print each one. It’s the beginnings of a sculpture. I’m going to take a mold of this and cast these in big sheets, and then stick them back together and apply the materiality of ceramics to these sculptures.

OLIVIER ZAHM — So, you work on sculpture, you work on vases. But they’re also sculptures in their own right. And also chairs. You can go from every side of the spectrum: from functional to purely artistic.
ALEX REED — That’s the goal!

OLIVIER ZAHM — How do you choose your colors?
ALEX REED — Years of material research. These are all glazes and surfaces that I developed over many months, using different glaze formulas that I mix from raw materials. And then different pigments go into each glaze formula. Sometimes I fire things many times. This is three glazes fired very hot and then another glaze that’s fired at a lower temperature on top of that. The two glazes react differently and shrink at different rates, so one’s cracking a lot, and one’s staying put, so there’s a friction that happens, and it creates this breaking pattern.

OLIVIER ZAHM — In a way, ceramics is very cosmic because it’s fire and earth, right? It’s not a process that we totally control.
ALEX REED — Oh, absolutely. I do my best to make it a technical pursuit, but there’s a lot of unknowns and chance. And there are obviously transformations that happen in the kiln.

OLIVIER ZAHM — But you’re not inspired by a specific tradition.
ALEX REED — I’m inspired by tradition, but not necessarily aesthetically. It’s not a path that I want to follow, but I’m classically trained…

OLIVIER ZAHM — There’s a big history of ceramics in different cultures — Morocco, America, Mexico…
ALEX REED — And each region speaks a different language, but it’s part of the same way of communicating. I’m having a show in September, in LA, called “International Ceramics Friendship Park.”

OLIVIER ZAHM — Great title!
ALEX REED — Thankyou. For part of the show, I’m going to make an architectural model of this utopian city for all of the craftspeople around the world, like this transnational craft association. The model will be four by four feet, and it’s going to show massive housing blocks for retired crafts people. And a big pension administration building for the retirement fund. And a tomb for the unknown craftsperson.

OLIVIER ZAHM — Nice! And artists from all over the world can live there?
ALEX REED — If you work with your hands, you’re part of this very well-funded union.

OLIVIER ZAHM — But only ceramic artists?
ALEX REED — I called it “International Ceramics Friendship Park,” but it can be open to anyone who works with their hands.

OLIVIER ZAHM — That’s great! We have something a bit like that in France — in the ’50s or ’60s, in the south of France, Picasso rediscovered ceramics and created an old…
ALEX REED — Oh, in Vallauris?

OLIVIER ZAHM — Yes. It’s the big thing in France for ceramics. But I guess every part of the world has its own history.
ALEX REED — Absolutely. I mean, California has Heath. Beatrice Wood is very fascinating, too. She’s dead now, but she lived to be 105. She was Marcel Duchamp’s girlfriend at some point, in New York. And she lived in Ojai, which is two hours away, and made these amazing lusterware pieces. And this is Maria Martinez…

OLIVIERZAHM — Ah, yes!
ALEX REED — Who was a very influential Native American potter. And Beatrice Wood is kind of this iconic figure. There are very famous photos of her surrounded by really hot guys with their shirts off. And they’re all giving her chocolate. And people would ask, “What’s your secret to living?” And she was, like, “Hot guys and chocolate.” 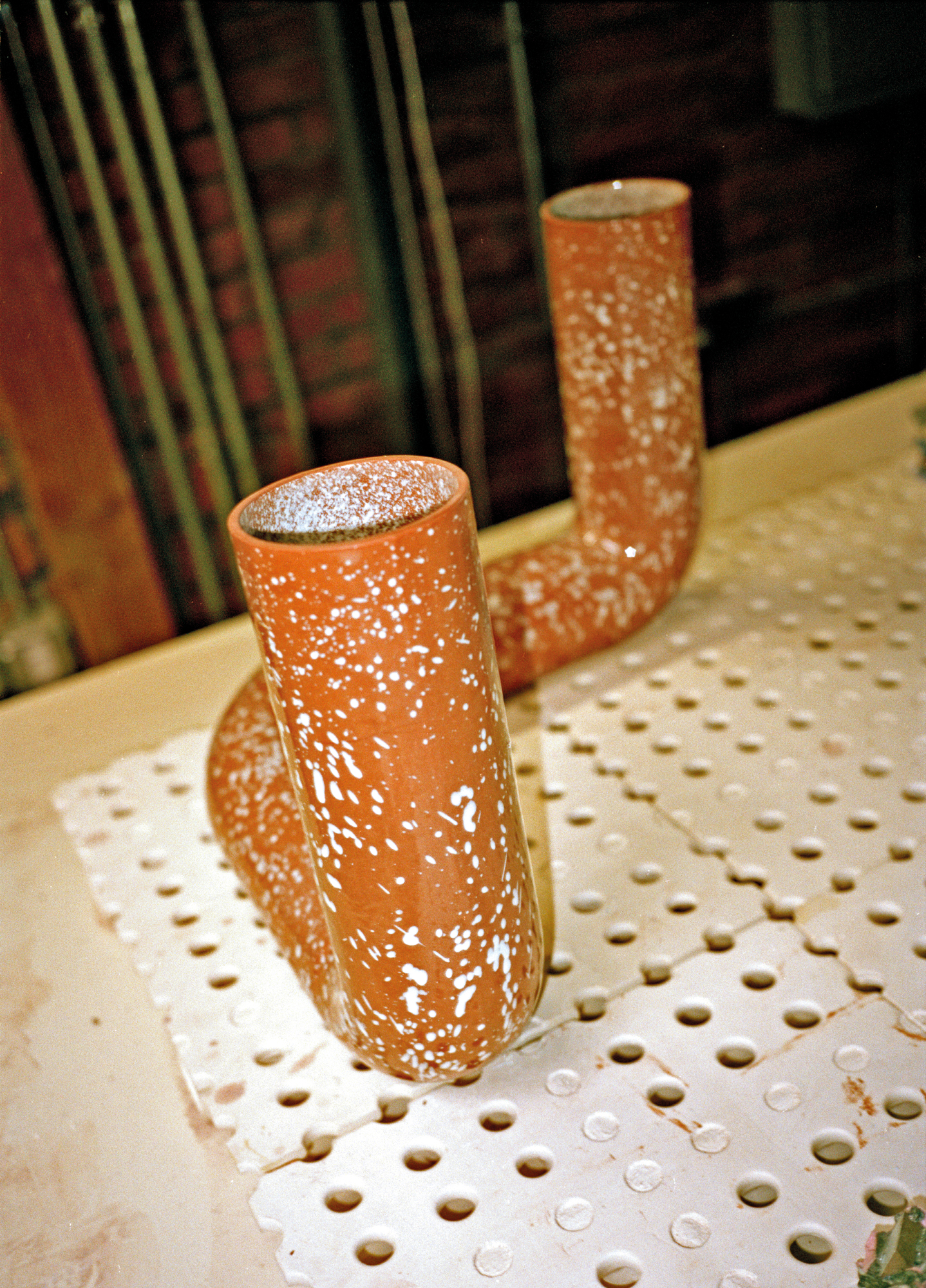 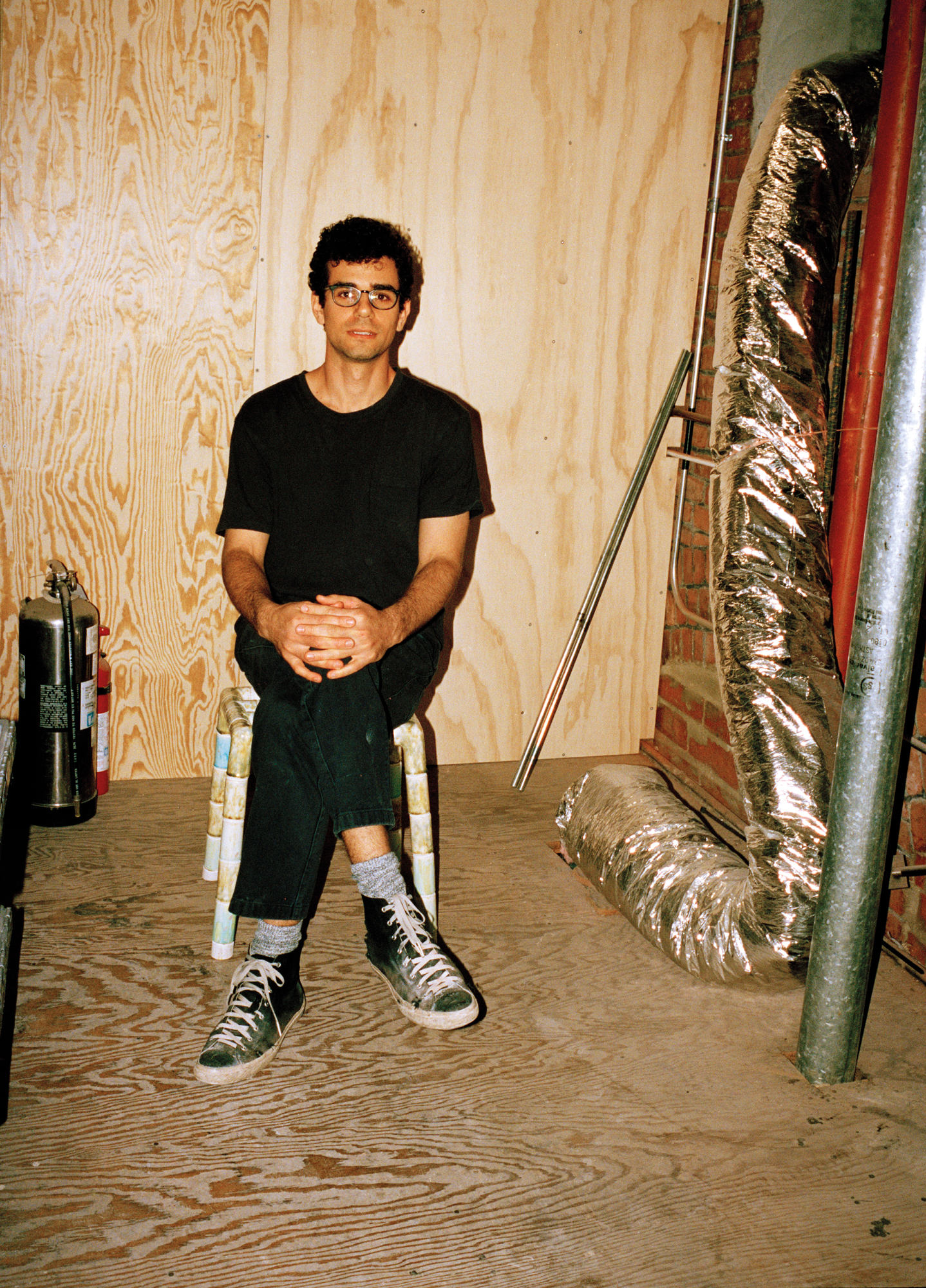 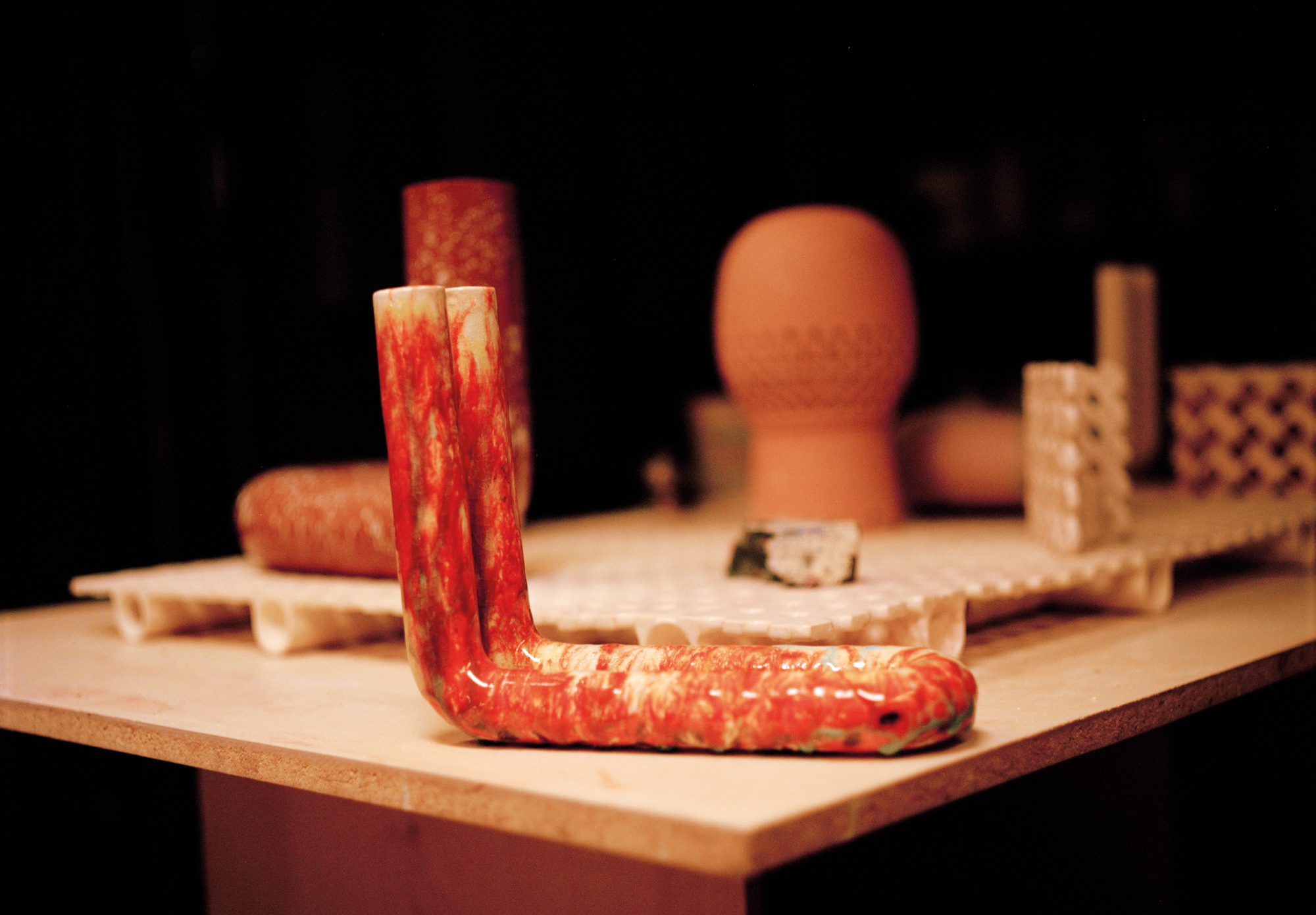 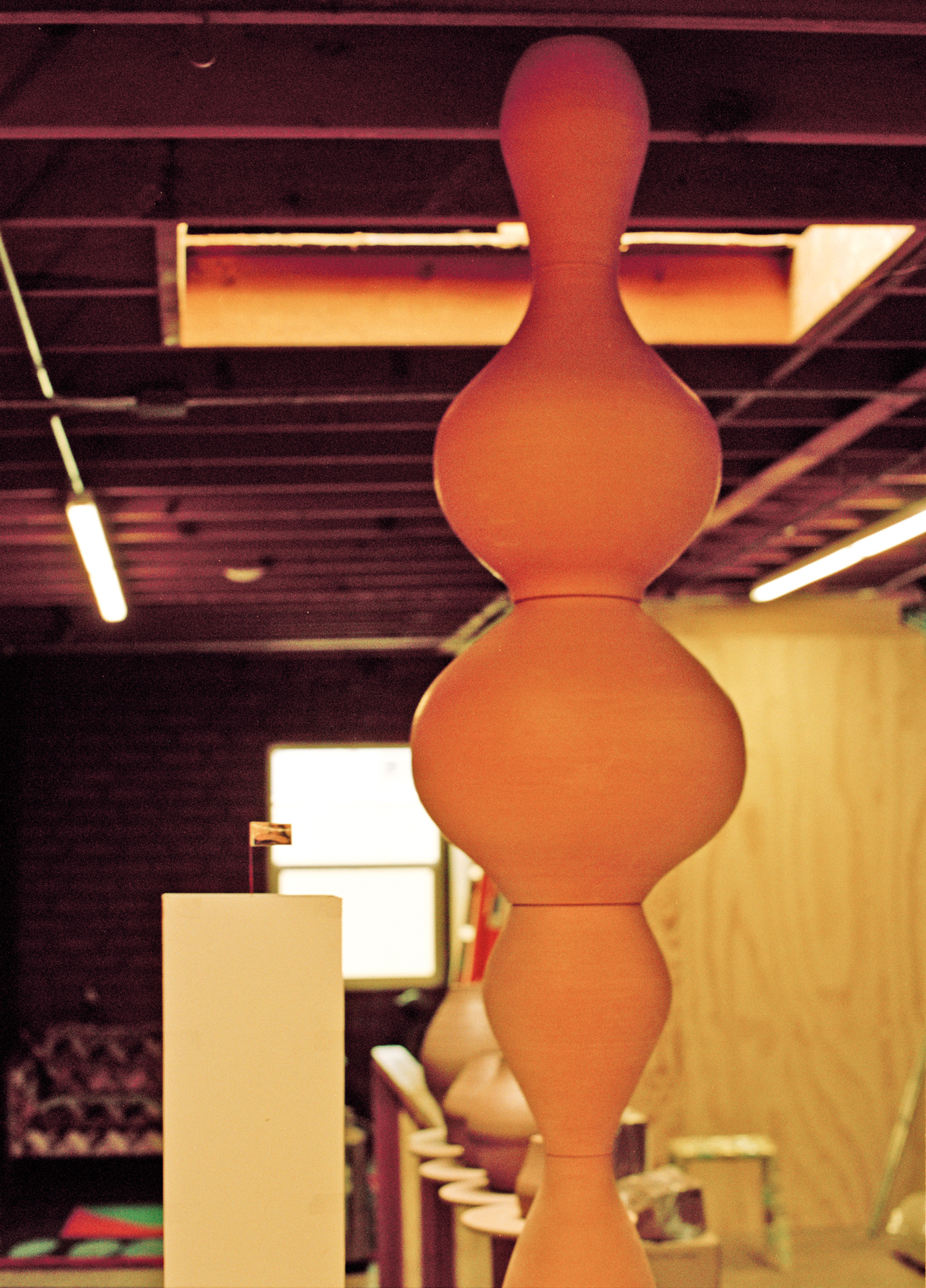 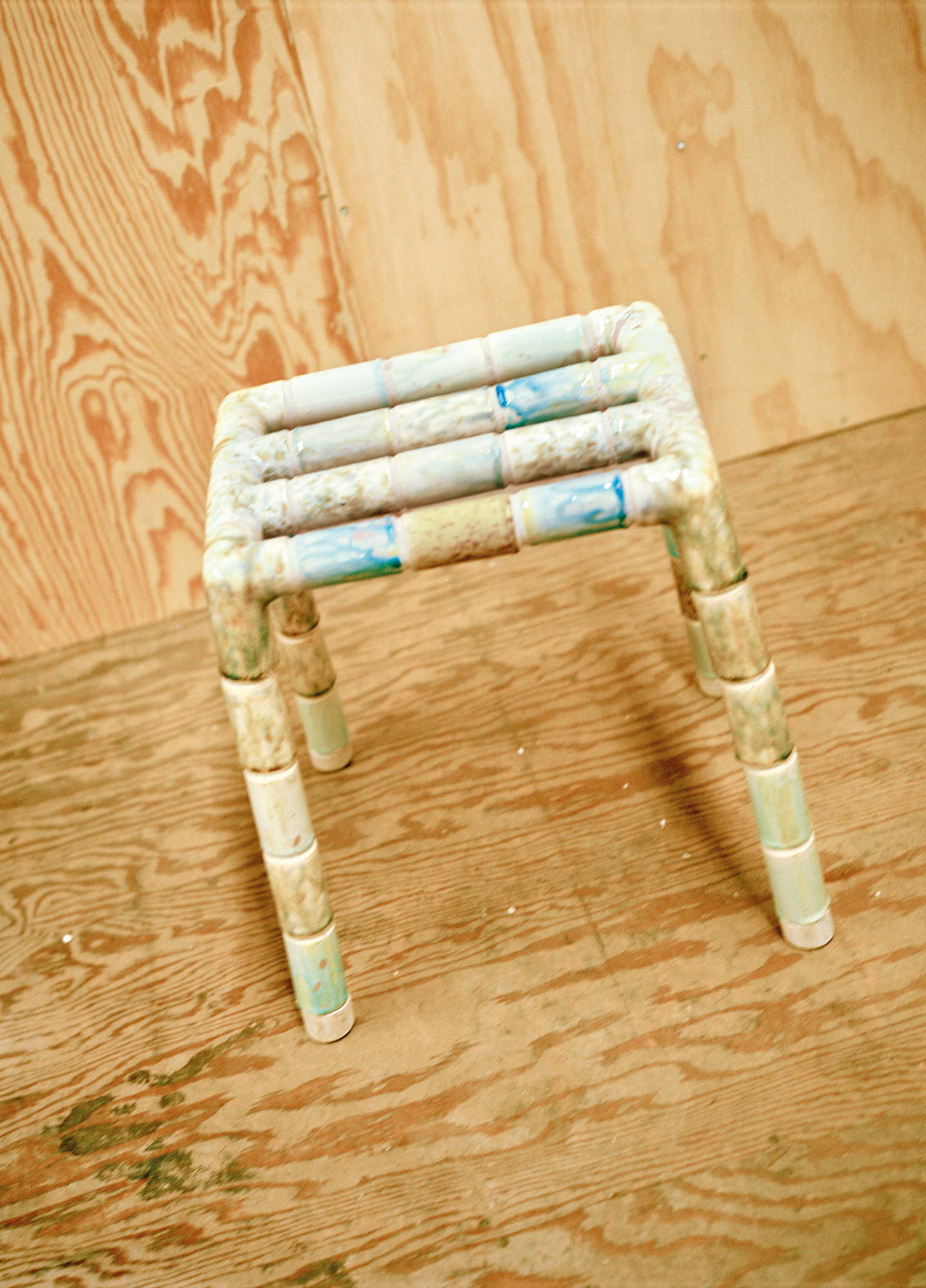