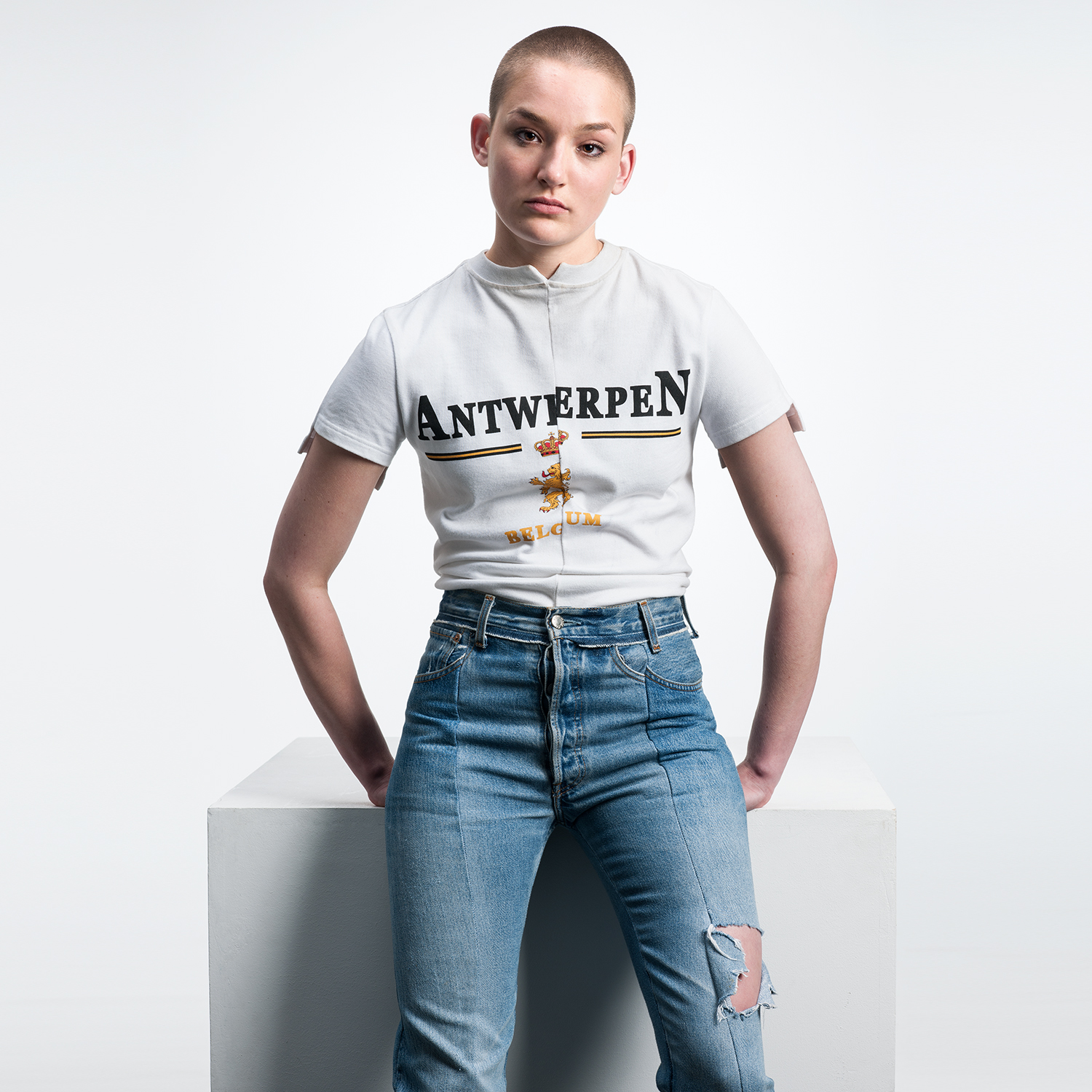 CAROLINE GAIMARI — How is Vetements organized?
DEMNA GVASALIA — It’s really group work; it’s a very democratic creative process. Whether it concerns the choice of stores we sell in, design concepts, the choice of fabrics or colors, everyone has input. But then I filter and edit it. Someone needs to make a decision. If not, it’s chaos! We have a studio, but it’s a nightmare. We don’t have enough space. We are 15 people, and my table was taken over last week because new interns arrived. Now I have to work from home!

CAROLINE GAIMARI — How did you get started?
DEMNA GVASALIA — I started it with two friends, colleagues from a previous job with whom I kept in contact, and with whom there was a constant dialogue about what we did and didn’t like in fashion. At first, it was just the three of us. I financed it at the beginning, and it was from my living room. Then some others joined us along the way — people we knew from before and also people just coming out of school.

CAROLINE GAIMARI — Was there a specific catalyst that encouraged you to start the brand?
DEMNA GVASALIA — There is pressure in the industry to do a collection every three months and to come up with ideas more and more quickly, with no time to analyze or really even think about them. Aesthetically, there was something we wanted to do that we didn’t really see. The girls that we think are cool, the ones we consider to be “our women,” often either buy vintage stuff or wear old pieces that they’ve owned for years. We wanted to dress these women. It didn’t start out as a desire to create our own brand, but more to not lose the kind of passion we had and the result of our design process. We were all working for different houses, which can be fun and great, but at the end of the day it wasn’t really “our” work.

CAROLINE GAIMARI — Where were you working at the time?
DEMNA GVASALIA — I worked for four years at Margiela and almost two years at Vuitton. Two very different experiences, but both educational. The idea for Vetements started while we were all at different houses. It really started to take on its own life when we decided to fully dedicate ourselves to it.

CAROLINE GAIMARI — In a certain sense, you are now part of the industry.
DEMNA GVASALIA — We never wanted to make a statement about the industry — we show during fashion week, after all, and use the instruments of the industry. The most important thing has always been the woman that we target and making a product that’s meant to be worn. The wearability and the fact that girls want to try it on and buy it are crucial. The clothing speaks to a certain group of people, a niche, of course, but a big enough niche for us. We started at the right time as well because not so many young brands were emerging in Paris until a couple of years ago. It’s not easy, but the challenge is motivating. We speak in the voice not of our generation, but of a small public — the people we are friends with, hang out with, and share our interests with. 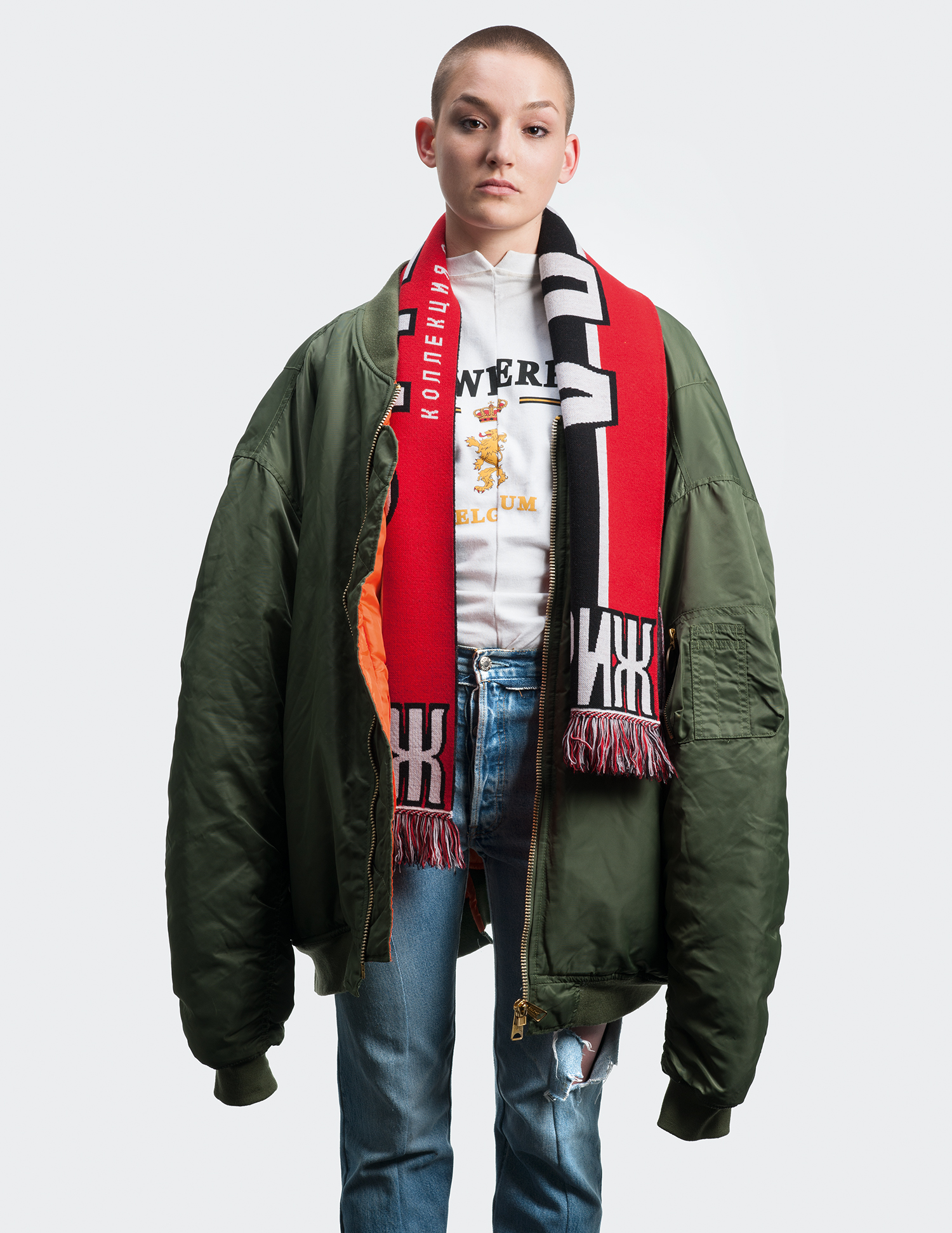 CAROLINE GAIMARI — There is a constant association between Vetements and youth culture.
DEMNA GVASALIA — You show in Paris off-schedule and in a gay cruise bar, and immediately you are considered “youth culture” — that shows you how conservative everything in Paris is! And we use girls and guys who are our friends, who aren’t models, who don’t really care about fashion. This association with youth culture is problematic because I don’t feel like there is very much of it happening; there is no obvious direction, music- or art-wise. Especially in Paris, there is no definitive youth culture; people might hang out at Aubervilliers or in ghettos. That’s an urban culture that inspires us, and it’s the Paris that we know. Perhaps the association with youth culture comes from the fact that we mix street and everyday elements in our collections; we have hoodies and bomber jackets, the things that people can relate to from the street and that are seen on younger people. I think there is a real absence of youth culture. We feel part of a certain network of people, but it’s not a youth culture. We enjoy the youth aspect, though, because we do really project on younger people when we show clothing for them.

CAROLINE GAIMARI — People see Vetements as being the “new Margiela.” What do you think about that?
DEMNA GVASALIA — Personally, I just can’t deal with that association anymore. But I understand why it’s made: when we started, we didn’t want anyone’s face on the brand. But that put us in this anonymous “Margiela” box. Martin had an amazing PR strategy in doing that. We just really didn’t want to put our faces out there, either, and preferred to let the clothes stand for themselves. I hate pictures of myself in any case. Now, we’ve said we will do one selfie a year. We will give that much, and we like it. But getting my portrait taken is the equivalent level of anxiety as going to the dentist. I don’t feel like I want the clothes to go along with our personal image. When you are a designer, and you have to come out at the end of the show, sometimes you just don’t want to do it. You don’t feel in shape; you obviously look tired. It’s a form of pressure — designers aren’t necessarily celebrities who want to put themselves at the forefront. Consumers are oversaturated with people to idolize, and there is a lack of individuality, unfortunately, in terms of allowing for personal interpretation and just wearing clothes the way you want and not the way the designer incarnates them.

CAROLINE GAIMARI — You are considered avant-garde.
DEMNA GVASALIA — That carries a strange connotation today. We just make clothes. Maybe the approach that we’ve chosen is not the classic approach of “This season we are going to do butterflies,” or “This season is ’70s.” We start more from “We like a three-quarter-length skirt,” and we do it regardless of the silhouette, which we don’t even define until we start to make the looks. It’s very instinctive, which also makes it fun. At other houses, it was always six months of one concept, meaning we would have a collar like so, and the skirt had to integrate the collar, forcing things into a frame that creates a product that people don’t necessarily want to wear. That’s something that we liberated ourselves from since the beginning. Saying that if we want a white oversized t-shirt inside a more fitted collection, we should just do it because that girl, she wants to wear that t-shirt with those jeans. It’s a wardrobe in the end. When we dress, we don’t wear a total look; we wear pieces.

CAROLINE GAIMARI — Fashion victims wear total looks.
DEMNA GVASALIA — Or people that follow fashion campaigns. They either don’t really have an opinion, or they want to convey a certain social status. The people we make clothing for have no need for the social message; they have their own style. It permits them to create for themselves with the ingredients that we try to give them.

CAROLINE GAIMARI — Why was it important for you to do a show?
DEMNA GVASALIA — It’s an easy tool for us to express what we are trying to convey aesthetically. The clothes should be seen on girls or guys wearing them, in relation to the body. It’s the easiest way to convey the full message, the atmosphere, the look, the walk. And we are about the attitude, how you wear the clothes. When the sleeves are too long, you walk a different way, and that gives a certain attitude to the wearer. 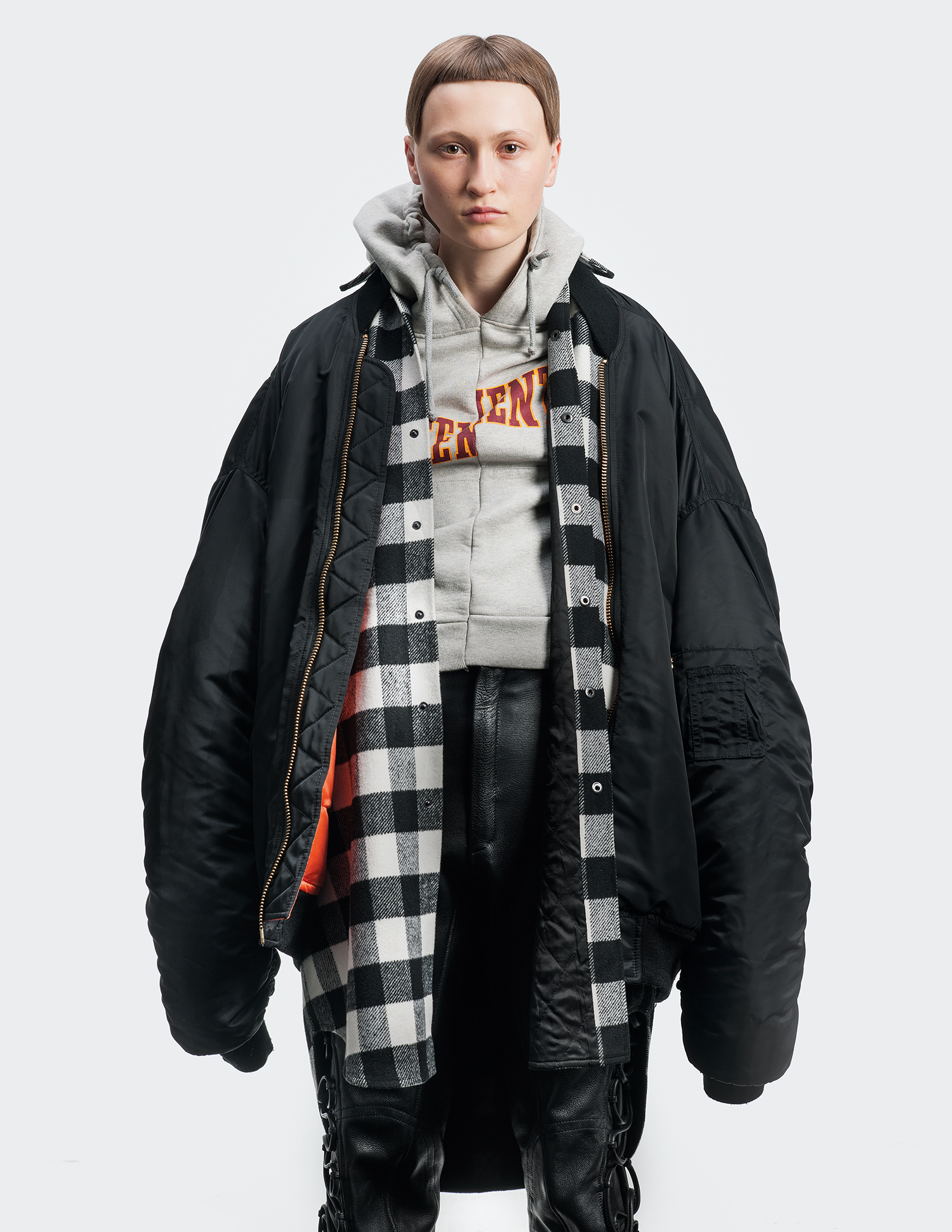 CAROLINE GAIMARI — How did you pick Le Dépôt, which is one of the oldest gay clubs in Paris?
DEMNA GVASALIA — We knew we wanted a nightclub, but clubs in Paris can be so chic and sophisticated. We wanted something a bit seedy and not so clean. We even went to the Queen on the Champs-Élysées, but we couldn’t figure out if it was just bad or good-bad. It was too complicated in any case. I went to Le Dépôt a few times for parties with my friends, and I feel like it has something so authentic. It doesn’t try to be anything — it’s just a cruise bar. The owners were really easy, too. They said that no one had ever done a show there, what a weird idea, and that they don’t know anything about fashion. But it was quite refreshing. I also liked bringing women into that place.

CAROLINE GAIMARI — Is androgyny a subject of your work?
DEMNA GVASALIA — It’s interesting, and I think it evolves all the time. But even if we are creating a masculine jacket, we still project it on a girl. We fit it on a woman. We don’t fit things on guys. We have to consider body shapes when we are designing. Of course, a skinny guy can wear one of our oversized jackets, but it doesn’t always work. There are physiological restrictions, not ethical or sociological reasons. If a guy wants to wear a dress, sure. But we don’t make the dresses for guys.

CAROLINE GAIMARI — So, the clothes in the show worn on men are not menswear?
DEMNA GVASALIA — No, and we actually had a little problem finding the right 35 girls for the show, so we needed to fill it up with guys. It’s true that some pieces come from a masculine wardrobe, because it’s more complex and very skinny guys can wear them. But I can’t wear them, so one day I would love it if we could manage to make clothes for men, outside of the androgynous aspect.

CAROLINE GAIMARI — Is Vetements sexy?
DEMNA GVASALIA — I think it’s very sexy! But from a “normal” perspective, I guess it’s not. I know that when we try the clothes on our models — girls who don’t dress to seduce anyone — it’s not that kind of sexuality. These are girls who flatten out their boobs. It’s different, a way of dressing to feel strong, and that can feel sexy. There are elements when there is a leg that is out, or half the back is out. It’s a very selective sexiness.

CAROLINE GAIMARI — I never see you out in Paris. I feel like you exist in a parallel universe with your anonymous, hidden team.
DEMNA GVASALIA — I go to Cicciolina, like everyone else. But besides that, we are too busy to go out during fashion week, or we don’t have the connections to get in, so we don’t even bother and just open some cheap white wine in our office and that turns into craziness. Or we go to a club called Metropolis near Orly Airport, which is a totally crazy place; I think that should be the next Studio 54 of Paris. It’s crazy — the music is actually so bad that it’s better than anything you can hear in normal places in Paris. The public is very inspiring. It’s a bit dangerous, but it’s fun. We were thinking of doing our next show there, but it’s really too far.