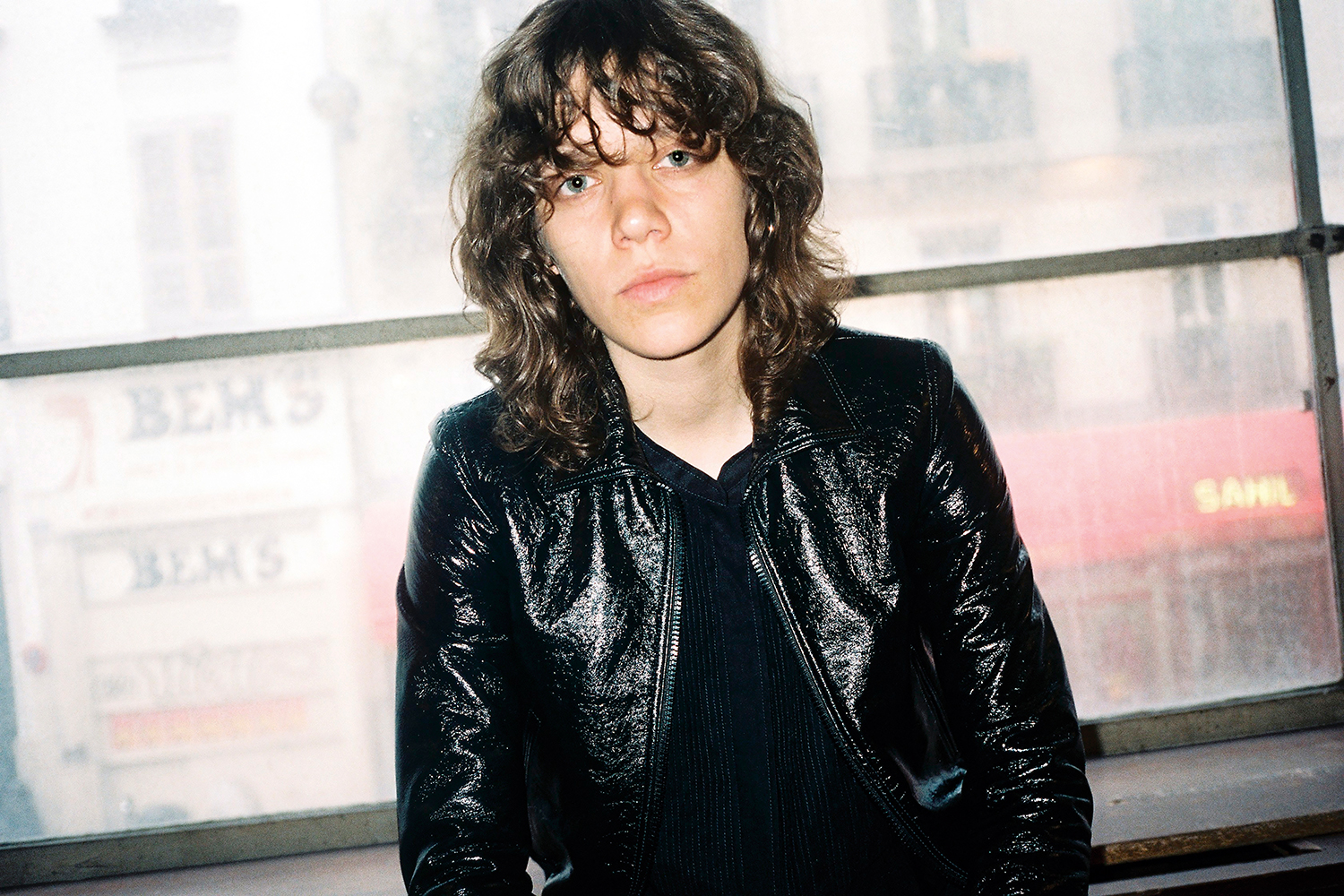 ANNABEL FERNANDES — Let’s start with how you got into music.
CLARA DESHAYES — When I was 13, I discovered a secondhand record shop by my school and started going there every week. It was two euros per vinyl, so I could just buy something that I was attracted to without knowing what it was. That was how I started digging a little bit deeper. For me, it was a hobby. It was too easy to make it into a job.

ANNABEL FERNANDES — You immersed yourself in music.
CLARA DESHAYES — Exactly. I was bored at school, and there were student strikes, so they shut the school for a month. I didn’t want to go back, so I quit. I saw on MySpace that a music magazine was looking for an intern, so I sent them a message.

ANNABEL FERNANDES — Which magazine was it?
CLARA DESHAYES — Trax. It was the biggest electronic music mag in France at the time. It was cool because I could tell my parents I was a journalist, but I was just paid to go to clubs and report on the parties or review records. After a while, they let me do interviews, and I interviewed Pedro Winter (Busy P) from Ed Banger. We got on well, and he mentioned that if I was bored at Trax I could call him to intern. After nine months at the magazine, I started assisting at the label. The office was just three desks: one for Pedro, another one for his assistant, and the last one for me. We were all doing a lot of different tasks. I really saw everything — the artists coming to show their latest work, the development of the forthcoming record, pressing, and promo.

ANNABEL FERNANDES — How did you start DJing?
CLARA DESHAYES — When I started going out a lot for Trax, I was 17 but looked like I was 14. I would go out by myself. I wasn’t drinking or anything, so I just put myself in a corner and observed. I didn’t realize I was actually learning. I was always looking at the hands of the DJ and trying to figure out what he was doing when he pushed a particular button.

ANNABEL FERNANDES — So you taught yourself before you got your own turntables.
CLARA DESHAYES — I never had a CD turntable. I’ve only ever had vinyl. I learned everything by watching, but I wanted to be more than a witness. As a teenager, I was into rock. I didn’t have any electronic music on vinyl, but some friends of mine lent me some so I could start mixing in my bedroom. Pedro heard about it and said, “We’re throwing a party, do you want to do the warm-up?” Before I could say anything, he said, “Okay, you’re on the flyer, and your name is Clara 3000.” They put the name as a joke. They would call me either “junior” or “intern” or “Clara 3000.”

ANNABEL FERNANDES — You are still the future. How old are you now?
CLARA DESHAYES — Twenty-five. It’s not a name I chose, you know, in a hip-hop way. I like it because it’s kind of shitty, actually, especially with the pressure of performing. Like, “Don’t take me so seriously.”

ANNABEL FERNANDES — How have you changed over the years, personally and musically?
CLARA DESHAYES — When I started, it was mostly about entertainment. I was surrounded by Pedro and Ed Banger’s philosophy. I was very influenced by them. I didn’t take it seriously at all. I was just putting on music. I never said, “I’m DJing.” Then I started working more and figured out that everywhere I went was for the music first and foremost. I discovered that I loved the night and developed my own personality and ideas of what it means to DJ.

ANNABEL FERNANDES — What does it mean for you now, especially being young and female? The clubs are dominated by male DJs.
CLARA DESHAYES — It was so instinctive. I didn’t say, “I’m a girl, I do this.” I was just there. I didn’t think about it at the beginning. If you think about these things as problems, they’re just going to stop you.

ANNABEL FERNANDES — You’ve said that you wished you could have experienced The Haçienda in Manchester, Wigan Casino, and Mudd Club in their prime.
CLARA DESHAYES — Those scenes make me dream. But I don’t look to the past like it’s better. I want to make now better. Right now in Paris I think there is an energy that is coming back. It’s super-exciting to have a party like La Cicciolina, for example, that people may look back at one day as iconic.

ANNABEL FERNANDES — What’s been your biggest career milestone so far?
CLARA DESHAYES — DJing at the Renate in Berlin. I had such a perfect image of the city in my mind that I didn’t want to go there until I had to DJ there. So, that’s what I did. In my first year as a DJ, I played at Pacha in Ibiza, in front of 6,000 people, which is like the complete opposite to Renate, but it’s also something important career-wise. But Berlin is a totally different level.

ANNABEL FERNANDES — After Ed Banger, how did you come to sign with the label Kill the DJ?
CLARA DESHAYES — I didn’t have a booker back then. I replied to requests myself, which I hated. When Silencio opened in Paris, they contacted me because they were looking for residents. I was sure to make enough money to pay my rent, so I did that. One night I had to DJ after a Battant concert, which was a band on Kill the DJ. They were backstage listening to me and booked me later to do a warm-up. It was a mutual attraction. Even if it’s a really small label in Paris, it’s one of the ones I admire the most.

ANNABEL FERNANDES — You’re also doing Rinse FM France.
CLARA DESHAYES — I do a monthly show. What I like the most about this is that it allows me to make music that is not club-oriented. It’s a cool field of expression. I’m just vomitting out all the music that I’ve been listening to the past month.

ANNABEL FERNANDES — You have a new EP coming out soon on Kill the DJ. How did you get to this point in your career?
CLARA DESHAYES — I’m working on it. I was making loops on my laptop, but nothing too serious. They knew I was willing to make my own music, but I didn’t have a studio. So they gave me the basement at their office. I’ve been there for six months now. It took some time because I didn’t know anything about the machines, and most importantly I needed to find my voice.

ANNABEL FERNANDES — What can we expect from the EP?
CLARA DESHAYES — At the beginning, I thought it had to be a portrait of me. But now I look at it in a completely different way. I just had fun and recorded stuff. Now I’m editing. It goes from downtempo industrial rock to stuff that I could play.

ANNABEL FERNANDES — Are there collaborations?
CLARA DESHAYES — No. I’m trying to make everything myself. I realized that I don’t care about making mistakes. I just want to learn. Even if what comes out is sometimes fragile, I realized that the music I love is often like this. I don’t care about showing weakness. It’s really orientated toward myself. I feel like I’ve been seeing a shrink. You deal with coming back the next day and listening to what you’ve done. Sometimes it’s shit, and you’re like, “Fuck!” But it always brings you somewhere.

ANNABEL FERNANDES — When is this coming out?
CLARA DESHAYES — September or October. I really want it to be out before my 26th birthday. For me, 25 means something.

ANNABEL FERNANDES — What producers do you find exciting at the moment?
CLARA DESHAYES — I really like Barnt and Dollkraut.

ANNABEL FERNANDES — “Fire” by Dollkraut! You put me onto that.
CLARA DESHAYES — The whole album is super-good. It was my winter tunes.

ANNABEL FERNANDES — You did the soundtrack for the last Vetements fashion show and have done music for Jacquemus in the past. Where do you start when working with a designer on a show?
CLARA DESHAYES — We’re a small group of friends wanting to make stuff, so I already knew the designers personally. Even without seeing the collections, I would have organically come up with something like what I did for them.

ANNABEL FERNANDES — A designer like Rick Owens is so involved with the music of his shows.
CLARA DESHAYES — I went to a Rick Owens show, my first, and thought there was something happening with the music. You really felt like it was for a movie. It’s like sound design. I do quite a lot of that for Hermès. Their parties are always really theatrical. Last time, in Düsseldorf, it was about Surrealism. I had to make a soundtrack for that theme. I really dig doing that. I have such weird taste; it’s like snake charming. It’s like when you put medicine in cheese to give to the dog! You bring your music and make it digestible.

ANNABEL FERNANDES — What are you looking forward to?
CLARA DESHAYES — I really believe it’s better not to plan too much. Right now in Paris, we’re a bunch of young people all pointed in the same direction within our fields. It’s so cool to support your friends and feel that you are being supported. It gives me so much confidence in the now. Being 25 in a Europe that is dying, you could be pessimistic, but we aren’t like that.