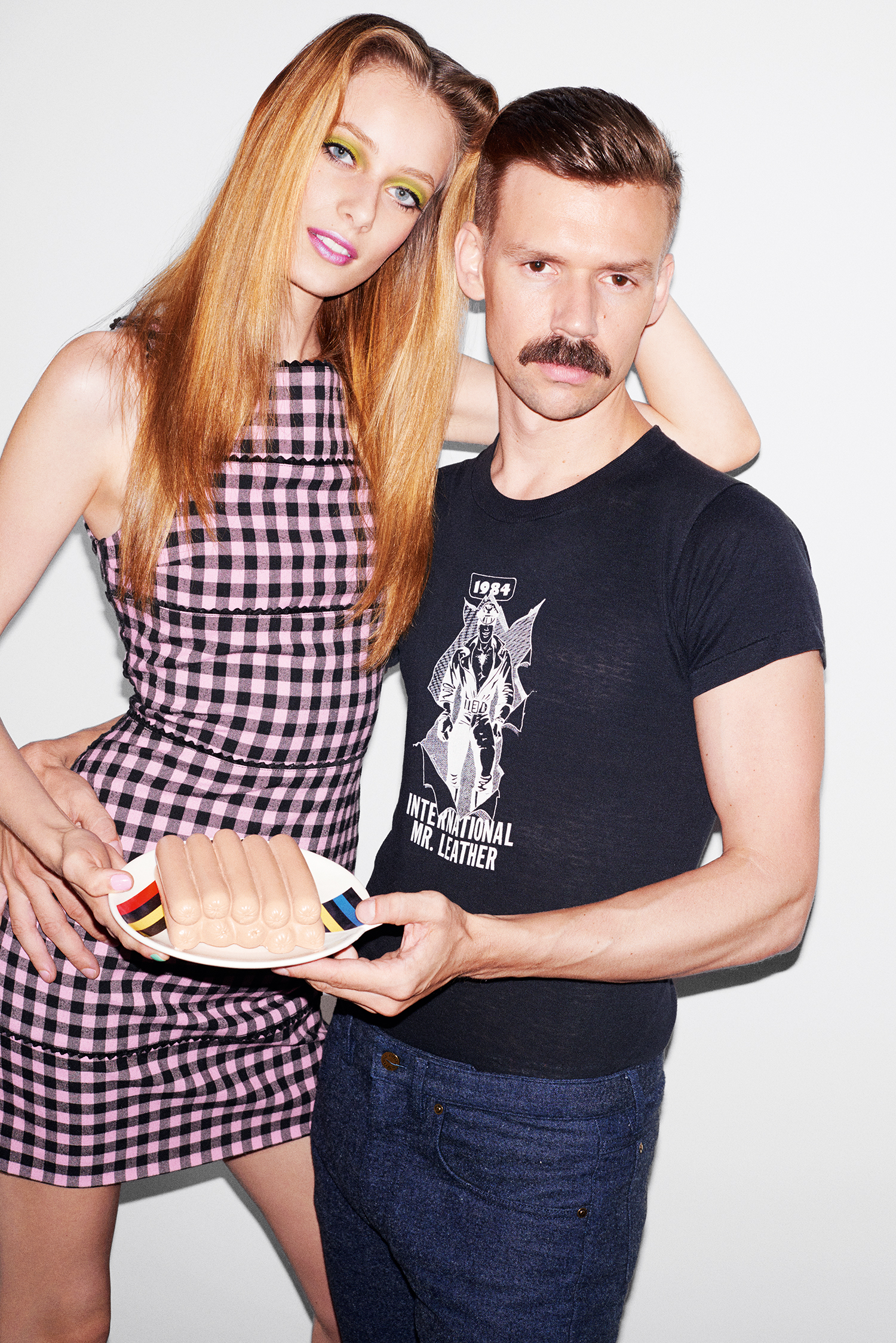 Raised in a religious family in Texas, Adam Selman had a lot of catching up to do when he moved to New York with a fashion dream. Well-known for his stage costumes for Rihanna, his eponymous collection is the perfect fit for the downtown New York scene — his clothes are colorful, crafts-y, and playfully ironic.

CAROLINE GAIMARI — Where did you grow up?
ADAM SELMAN — We moved around a lot when I was a kid. Illinois, North Carolina, Virginia. We eventually landed in a place called Belton, outside of Waco, Texas. In high school, I was a cheerleader. I did theater, and I was super nerdy. A real go-getter! Anything I could get involved in and feel accepted, I did. I wasn’t just a rah-rah cheerleader — I was a competitive cheerleader. I would drive for over an hour, four times a week, to Austin to practice with a squad. It was intense, and we all took it very seriously. I have a Junior Olympic medal somewhere in storage. It seems like such a distant life now.

CAROLINE GAIMARI — Was it your dream to move to New York?
ADAM SELMAN — It was. There was no other plan in my mind. I was 18, and I was like, “Get me the fuck out of Texas.” I moved to New York to go to Pratt, in 2000. I wanted to study sculpture, but that was out of the question for my parents. They said I needed some sort of business sense, so I decided to go into fashion. I was naive about it, really; we were secluded, and I didn’t grow up with inspiration from magazines or TV. Getting to New York was really the start of my fashion education. I had never even heard of Versace! I grew up wearing hand-me-downs, lots of vintage. There was — and I think still is — a place outside of Waco called the Style Station. It’s the best-kept Texas secret; it’s an old gas station off the highway that some denim enthusiast turned into a goldmine. They had every style, shape, and size of any jeans you can imagine, just stacked in piles around the shop. My friend Amber, who I grew up with, bought a vintage denim Wrangler shirt. We left the store; she couldn’t fit into it because her boobs were too big, so I took it and still wear it to this day. It’s my absolute favorite piece, which I will never get rid of.

CAROLINE GAIMARI — Do you like to rework vintage?
ADAM SELMAN — I actually love to leave vintage in its natural state as much as I can. I love pieces that are falling apart, t-shirts with holes that are safety-pinned together and hanging on by a thread. That’s beautiful to me. I have a pair of jeans that I call my “fatty jeans.” They have a 50-inch waist, and let me tell you, whoever wore these jeans before loved them for years, probably decades. They have been patched and stitched, over and over again. Technique like that just can’t be duplicated. I love to wear them; they just feel right. I take a bandana and put it through the belt loops and tie it tight! 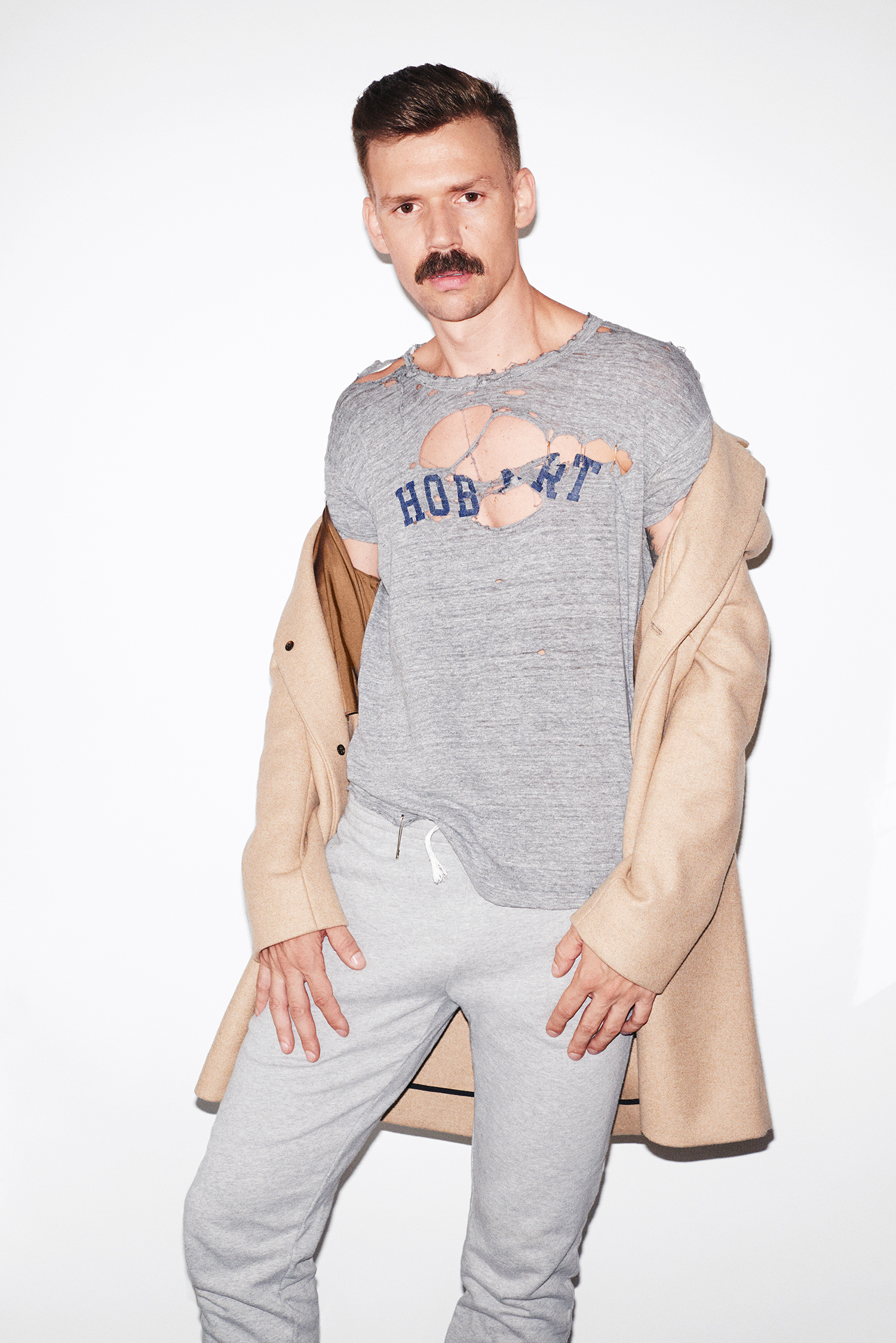 CAROLINE GAIMARI — Would you consider yourself secluded growing up?
ADAM SELMAN — Yes. I grew up in a religious household. Southern Baptists. I went to church five times a week. I can see why; my parents were struggling to make it with three kids; church was basically a free babysitting service, where we were encouraged to play outside, make good decisions, have respectable friends, and it usually came with a hot meal. I missed out on a lot of TV shows and movies; I didn’t watch anything R-rated until I was 16, so I had to discover it all later in life. Things were really overwhelming at 18. I was in NYC, and it was such a playground for me — discovering disco, for example! Donna Summer! Giorgio Moroder! I was constantly recreating a nostalgic moment, making up for what I had missed. I remember watching Female Trouble at 19 and hating it at first, and then not being able to get it out of my head. I had to watch all of John Waters’ films after that. It was embarrassing that I didn’t know who Divine was! I knew then that I had missed a lot growing up, so I just tried to soak it up. That was the real beginning of my fashion education.

CAROLINE GAIMARI — Did you go out a lot once you got to New York?
ADAM SELMAN — I was a pretty good boy. I always had a full-time retail job in school to pay the bills. I did go out a bit, and that’s where I met The Misshapes and the costume designer Zaldy.

CAROLINE GAIMARI — Zaldy was your first fashion job, right?
ADAM SELMAN — I started interning with him when I was 19. He had just shown his first collection, and I came on board right after that and stayed for 10 years. It was a real family environment. The fashion education I had seemed to imply that only corporate positions would be available to me after I graduated. He exposed me to a side of fashion that I had never really known about. Working with Zaldy, I realized that there was so much more to fashion: a creative environment, working together around a table, perfecting one dress at a time, honing the skill of beading, for example, over the course of one dress. 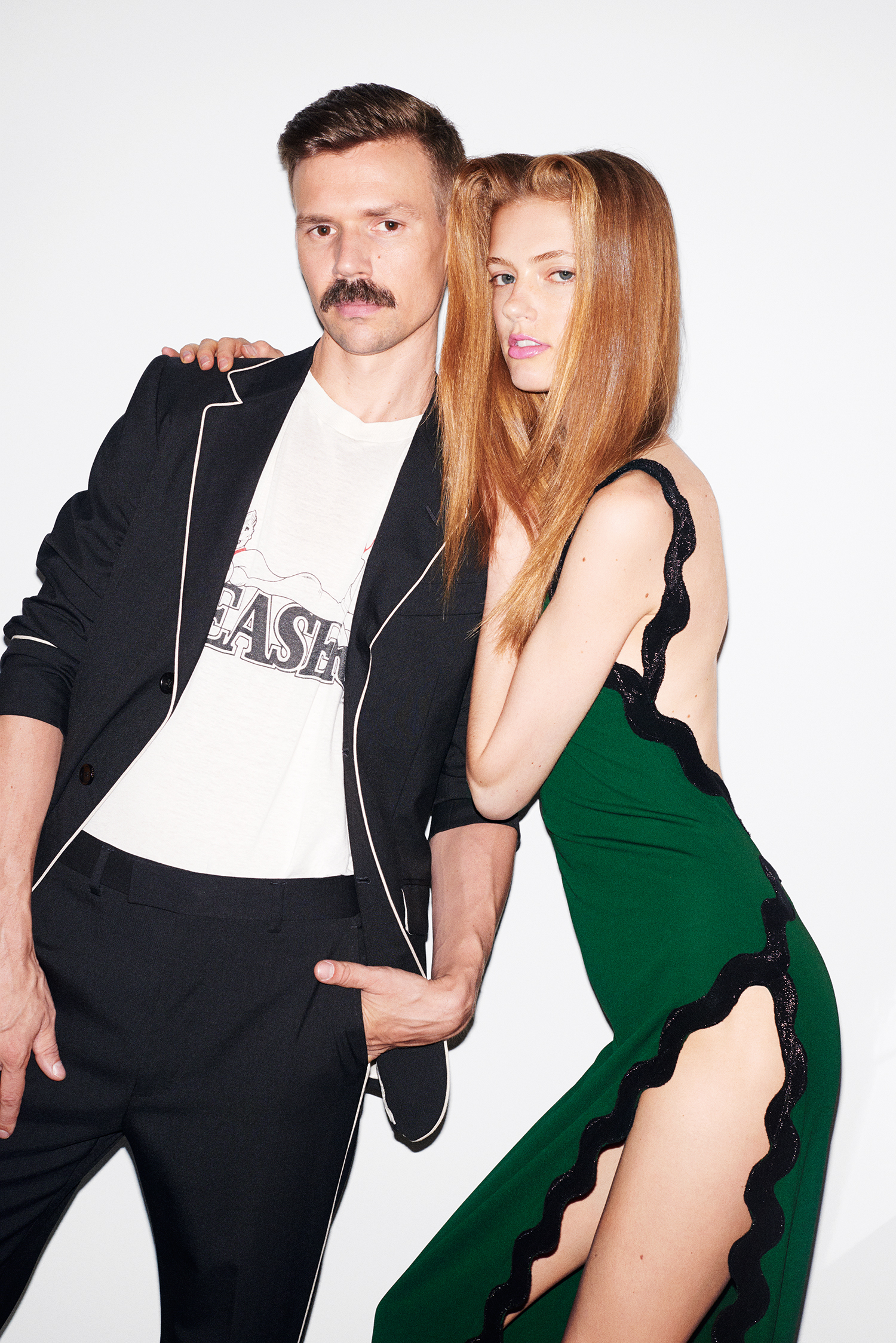 CAROLINE GAIMARI — Do you think technical skills are important for a designer?
ADAM SELMAN — I personally like the technical part, but I don’t think you necessarily need that to be a good designer. I love being able to still create and cut a dress the way I like; I can get influenced and actually execute my vision with it. I like crafts; I like to work the fabric myself, to understand it. I had, like, a Ritalin-infused two years of my life working with my friend [the comedian] Amy Sedaris on an all-crafts book called Simple Times: Crafts for Poor People. Crafts can be anything made with your hands, from embroidery and patch- work to decoupage. It’s an all-encompassing term for a lot of techniques, and it’s a very American concept. Amy and I would invite people over to make shit for the book, taping things to the wall, stringing things from the ceiling. I was a bit crafted-out after that, but a lot of that influences my fashion work. The last collection referenced arts and crafts — ribbons, bows, rickrack edges, and embellishments.

CAROLINE GAIMARI — How did you decide to start your own line?
ADAM SELMAN — If a designer tells you that they don’t want their own line, they are lying. Everyone who goes to fashion school dreams of having their own line. After doing all the work with Zaldy and designing for Rihanna’s tours, it just sort of presented itself and the time felt right, as I didn’t feel like looking for a job in-house somewhere. I thought it would be a small endeavor, but it was a huge deal. I didn’t realize how political it can be!

CAROLINE GAIMARI — Your name seems to always be linked to Rihanna.
ADAM SELMAN — That’s been a struggle. People associated me with her and had preconceived expectations of what I was going to do, assuming that she would always be at my events and that I would deliver Rihanna through my clothes. She is Rihanna; I am Adam Selman. I am very conscious that I need to make sure that the collection stands on its own, beyond what I do with her. I need to recalibrate interviews to not be about her and more about my collections. I love her, I love working with her, and she’s been a big supporter, but this isn’t all about her. I want to prove to her and to my supporters that I am not riding on her coattails. It’s about me, making clothes for cool, fashionable girls who aren’t international pop stars. 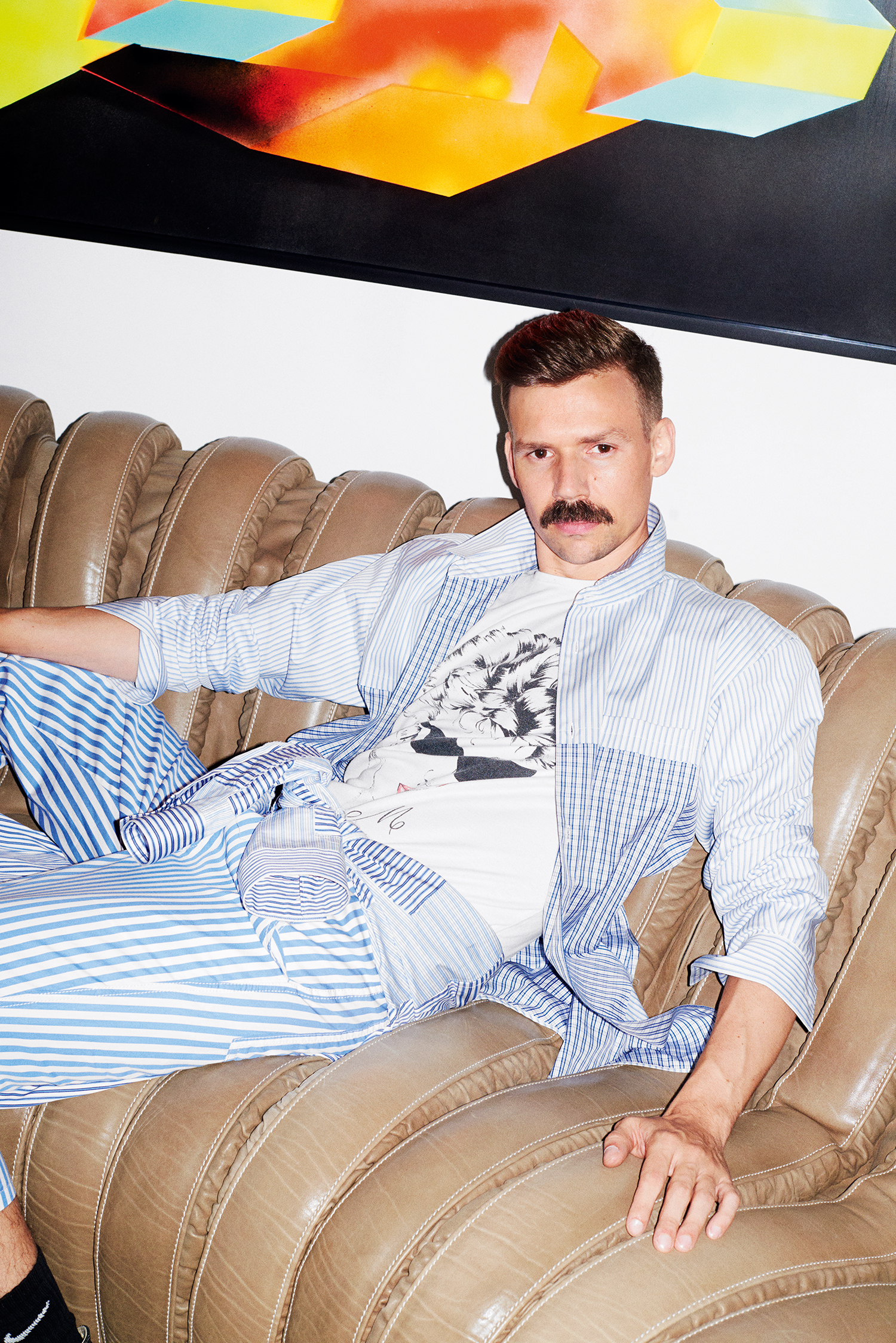 CAROLINE GAIMARI — Fashionable girls who want to dress like they’re in a John Waters movie?
ADAM SELMAN — Maybe I went a bit far in that direction on the last collection! Ha! I’ve always loved the energy and spirit of fashion, a look! The Todd Oldhams and the McQueens of the world. I wanted to make an accessible price point that still conveyed the excitement of fashion.

CAROLINE GAIMARI — Do you like showing in New York?
ADAM SELMAN — I am an American designer, and I really love being that. For example, talking about crafts. I looked to John Waters’ spoofs of American culture, taste, and ideals, and did something similar with crafts — turning them on their head and reinterpret- ing the idea for fashion. So you could look at those crafty inspirations — the bows, ribbons, rickrack, and gingham — without being able to readily label them as crafts or crafty.

CAROLINE GAIMARI — You also have a strong support system.
ADAM SELMAN — I love to ask favors! My main collaborator is my boyfriend and styl- ist, Mel Ottenberg. He helps me with the design process from start to finish, and I feel like we’ve learned a lot together. He styles the show and the lookbooks. Jen Brill has helped me with creative from the start, thinking out the show and bringing in a woman’s perspective, whereas Mel and I can get super into the guy-zone interpretation of women’s fashion. Jen always knows the next tip, and it’s always spot-on. Rafael de Cárdenas has done the sets for most of my shows and collaborated on a print for the last Spring/Summer collection. I envy his distinct point of view, and I hope that a little bit of that rubs off on me. When I said to the hairstylist Jimmy Paul that the inspiration was Cookie Mueller, he said he had been waiting for someone to bring that to him for years! Just to hear that is exciting, to think there are people who share the same spirit with me.