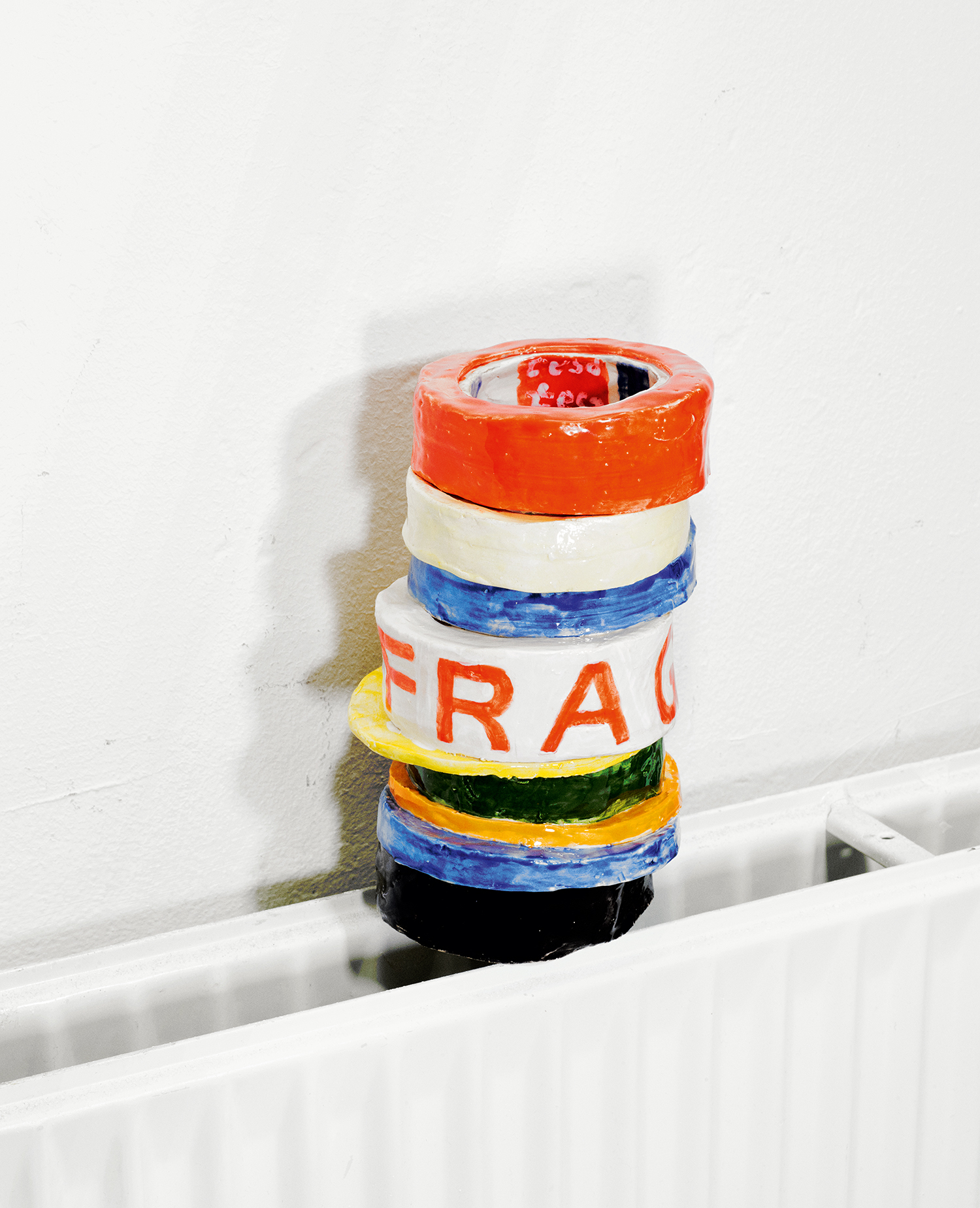 All works courtesy of the artist and V1 Gallery

Copenhagen-based artist Rose Eken works with the familiar objects and tableaux of modern life. Her work — lately in ceramic — is often inspired by music and theater. Using accessible and recognizable forms to stir her audience’s collective memory, Eken’s artwork appears frozen in time, creating a narrative of mystery and suspense.

JULIANA BALESTIN — How do you choose the objects that you reproduce?
ROSE EKEN — Well, it’s usually very common objects, things that surround us every day, or things we strongly relate to through association and memory. How I choose them depends on the story I want to tell.

JULIANA BALESTIN — What specifically prompted you to work in ceramics?
ROSE EKEN — I work in a lot of different media, but of late have focused my attention on that. Clay fascinates me because it’s such a versatile material. It’s very tactile, but it’s also very dense and clumsy. But clay is also a very poetic and fragile material that can be molded and shaped into the thinnest and finest porcelain. I like working with this range and always attempt to challenge the material and stretch it to its furthest.

JULIANA BALESTIN — Your work in your 2014 show at The Hole and elsewhere appears on a platform, laid out in ordered rows almost like evidence. Can you tell me about your approach to installation?
ROSE EKEN — Actually, it was the first time I ever showed my work in this way. Usually I display it much more as if it was a stage, or I make up a small scene or setting, which seems abandoned or perhaps the protagonist has just left the room — a cigarette still burning in the ashtray. My idea for the show was to create a large-scale butterfly collection or a form of anthropological study made up of paraphernalia and detritus from the punk rock world — all the gadgets and leftovers that can be found in a venue, behind the stage, in the band room or bar, meticulously displayed like different species on a large plinth. In its entirety, the installation consisted of over 500 ceramic objects, ranging from cigarette butts, ashtrays, duct tape, guitar pedals, and beer and booze bottles to larger objects, such as beer crates, monitors, and Marshall amps. The layout made up a monumental sculptural carpet that mapped out the different characters in a band as well as the audience through the different objects they use or are associated with. You could say the installation as a whole paid homage to the legendary NYC club CBGBs. 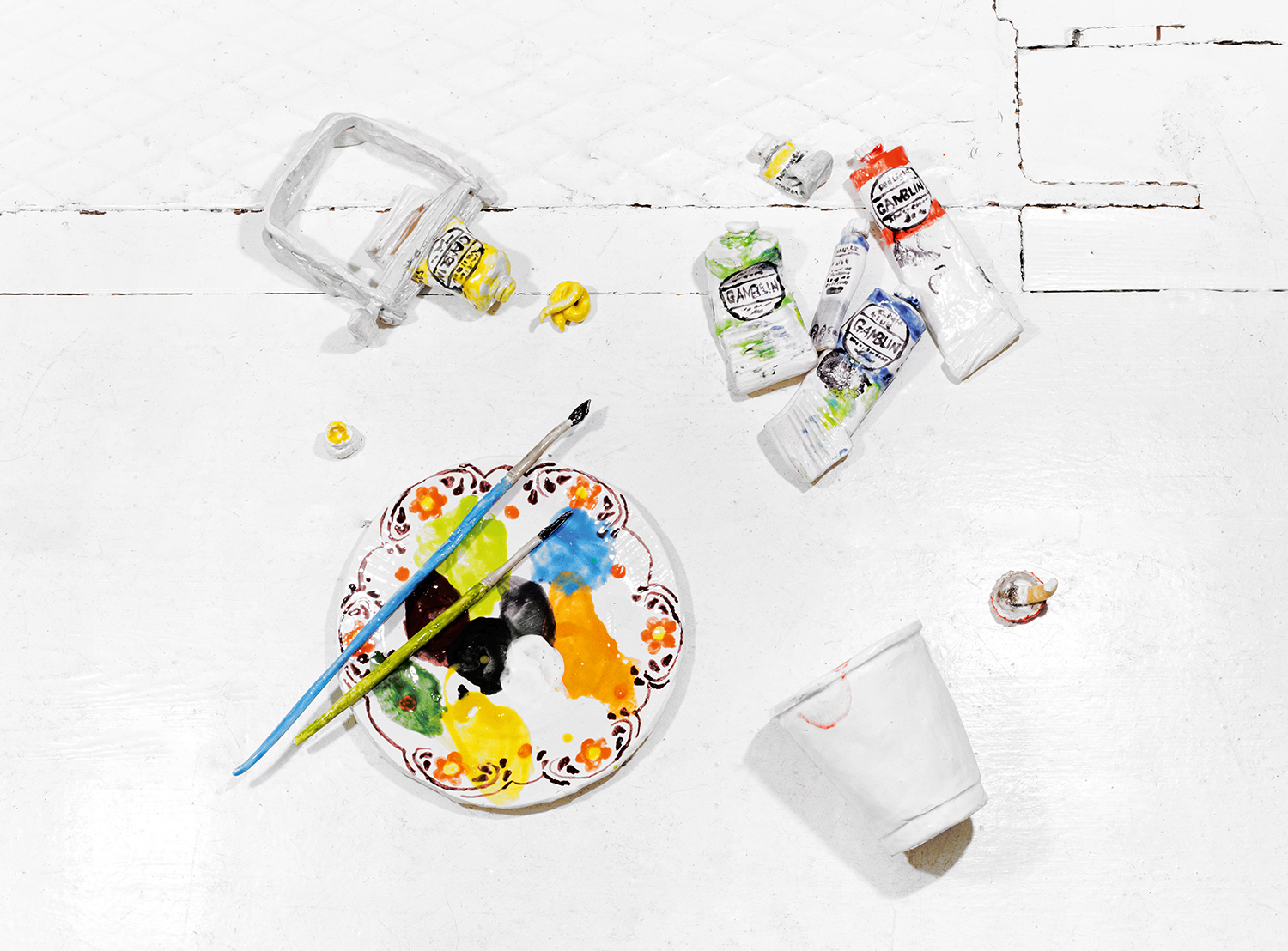 JULIANA BALESTIN — There seems to be a strong connection with music throughout your work. Can you tell me more about that?
ROSE EKEN — Yes, there is! I grew up with music. My mom teaches opera singers, so there was always some soprano screaming in our living room when I was a child.
But even more important is probably the fact that I left school quite early — at 16 — and started working in a theater as a stage technician. At the same time, I began doing the light design for different bands in the Copenhagen punk scene. This period has, in many ways, informed my work ever since, as it instilled a fascination with the notion of space — with venues and theaters and the stories they tell when empty. Basically, these large dark spaces are made for an audience — when you work there off-hours, it’s just a big black space which kind of awaits whatever is about to happen — the successes and failures that will occur on a specific night. Music is an inexhaustible source of myths, clichés, tales. Nothing beats the feeling of jumping up and down in front of a stage, screaming your heart out with 30,000 other people!

JULIANA BALESTIN — Have you always lived and worked in Copenhagen? I notice a strong element of Americana in your work, including references to Easy Rider and Bruce Springsteen.
ROSE EKEN — Actually, I lived in Boston for a year, when I was three years old — not that I remember much! I moved to Scotland in the late ’90s to study, and after finishing my BA there I moved to London and did an MA at the Royal College of Art. After that, I kind of stuck around, spending about 13 years in the UK. Then I spent a year in Copenhagen before moving to Berlin, and after that to New York, where I lived three years ago and where I’m planning to move again at least for a period of time within the next year or so.

JULIANA BALESTIN — I enjoy that in your work, whether ceramics or photographs, the objects present themselves as used. Crumpled cigarette packs, a single bottle cap discarded from its bottle.
ROSE EKEN — It interests me how the most banal objects are laden with meaning, memories, and thus with narrative. Since I was a child, I have created tableaux or scenarios. I never had a dollhouse; my entire room was a giant installation of miniature scenes. As an artist, I started out making works in miniature, creating small scenes on a large scale in cardboard and masking tape, which I then either photographed or filmed. It’s only later that I began working with ceramics. In many ways, I use my own biography as a starting point, but I’m actually not interested in telling anything about myself, per se. Rather, I aim to spark people’s ideas and memories. I set the scene, but it is the individual spectator who acts out the “play” or concludes the narration through his or her own associations and memory.

JULIANA BALESTIN — What are you currently working on?
ROSE EKEN — I’m super-busy making new work for my coming solo show at V1 Gallery, in Copenhagen, opening in August. For this show, I’ve shifted my focus away from the music world and am instead scrutinizing the art world. Really, there are just as many gadgets, myths, and clichés to be found here. I will stage the entire gallery space as an artist’s studio with paint tubes, brushes, canvas, work tools, ladders, etc., all made in ceramic. I asked a selection of contemporary artists from Europe and the US to photograph something specific in their studio — an object that inspires them or a particular work tool — and I will render it. The final installation will become a fictive studio — a meta-place, where each object refers back to a specific artist, and thereby talks about his or her personal style and way of working.