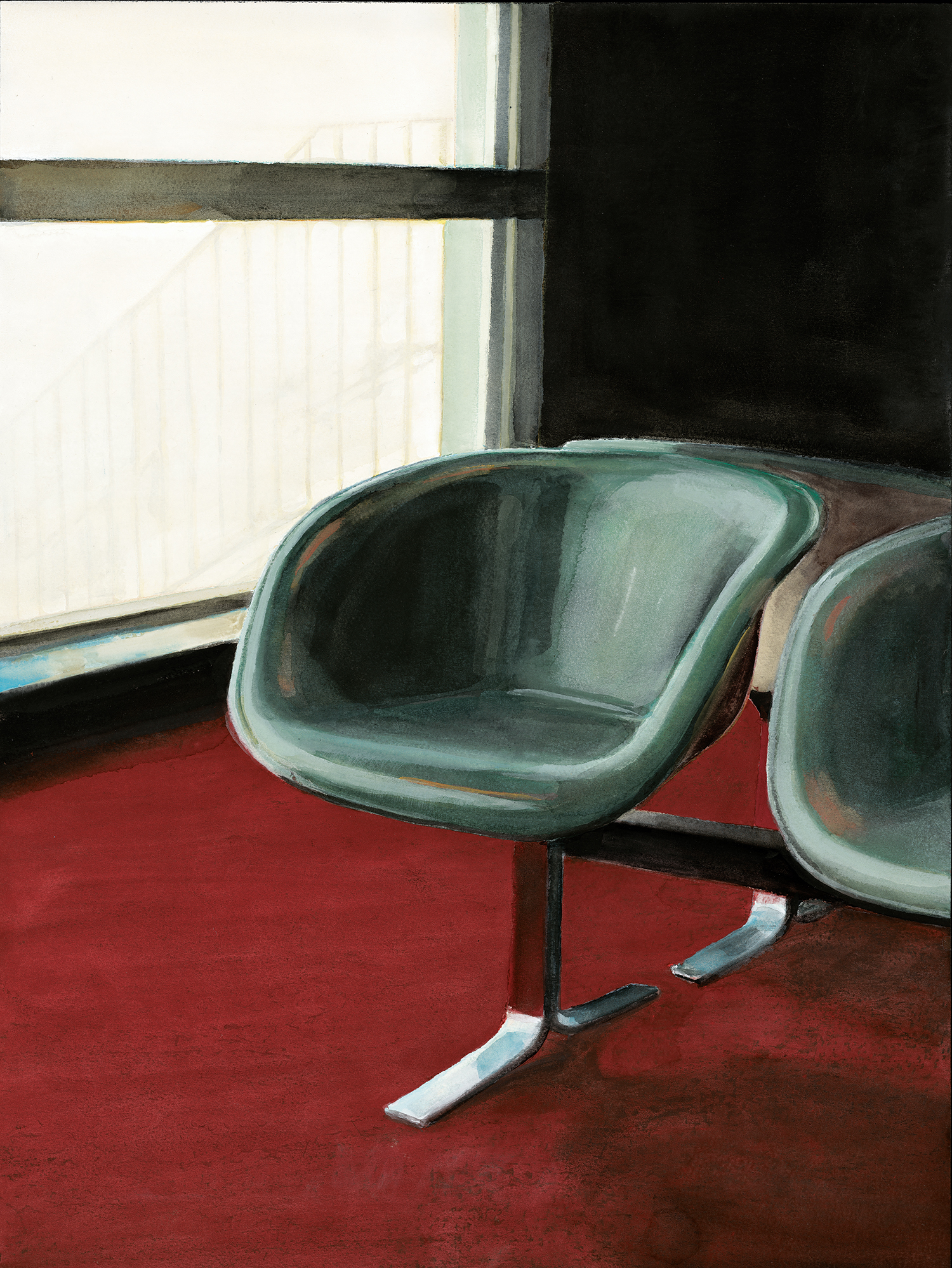 JEFF RIAN — Did you ever think the gouaches would be so much a part of your work?
DIKE BLAIR — I’d only been showing for a few years when I had the notion to paint landscapes on paper, but as a kind of “Sunday painter” thing. This was on holiday in the early ’80s. You were there. Maybe you remember. I didn’t imagine showing them with my more “sophisticated” work. But I showed about 35 of them in an East Village gallery, Christminster, in 1986, concurrently with a show of complicated, ambitious work I did at Baskerville and Watson Gallery.

JEFF RIAN — I do remember. But then they evolved.
DIKE BLAIR — Initially, I painted from observation or memory. Then I started taking snapshots to work from, which made the endeavor more serious. At that time, I was making photo, resin, and paint concoctions on glass. I think I first hung gouaches with my other work in Chicago in 1989. It felt right despite the fact that I couldn’t articulate why. The fact that other artists responded to the gouaches increased my confidence in them.

JEFF RIAN — How did the subject matter evolve?
DIKE BLAIR — Subject matter, especially early on, came naturally. They were landscape-oriented, painted from snapshots I’d taken traveling or on vacation. Then I got interested in still life, which, invariably, was of things I consumed or were within arm’s reach — paperbacks, comic books, drinks, cigarettes, ashtrays, beverages, etc. These were staged setups I’d photograph in my studio and then paint. By the late ’80s, the same images would appear in both my glass works and gouaches. Sometimes the image might have been specifically made for a glass piece, and a gouache would follow, but more often a gouache subject would become part of a glass piece. Then, in 2000 or so, I more deliberately developed the formal aspect of the pictures I shot to paint. I would work in pairs so, for example, I’d paint windows, which I thought of as “open,” and flowers that I thought of as “closed.” I also revisit subjects or genres.

JEFF RIAN — There was a period when you made still lifes on a spotlit background, including nudes, which made the girl look almost toylike.
DIKE BLAIR — Those spotlit things were staged, photographed, then painted. One approach I used was to use frisket to mask off areas of the image and spray the spotlight effect with Krylon paint. Since I’d already painted in the landscape and still life genres, I wanted to do something with the figure. I was in a strip club one night watching dancers under spotlights, and in the dark club, I thought, here is the solution — they were like objets vivants. I shot two different strippers on black seamless paper under spots, so they had the same feel and look of the still-life work. 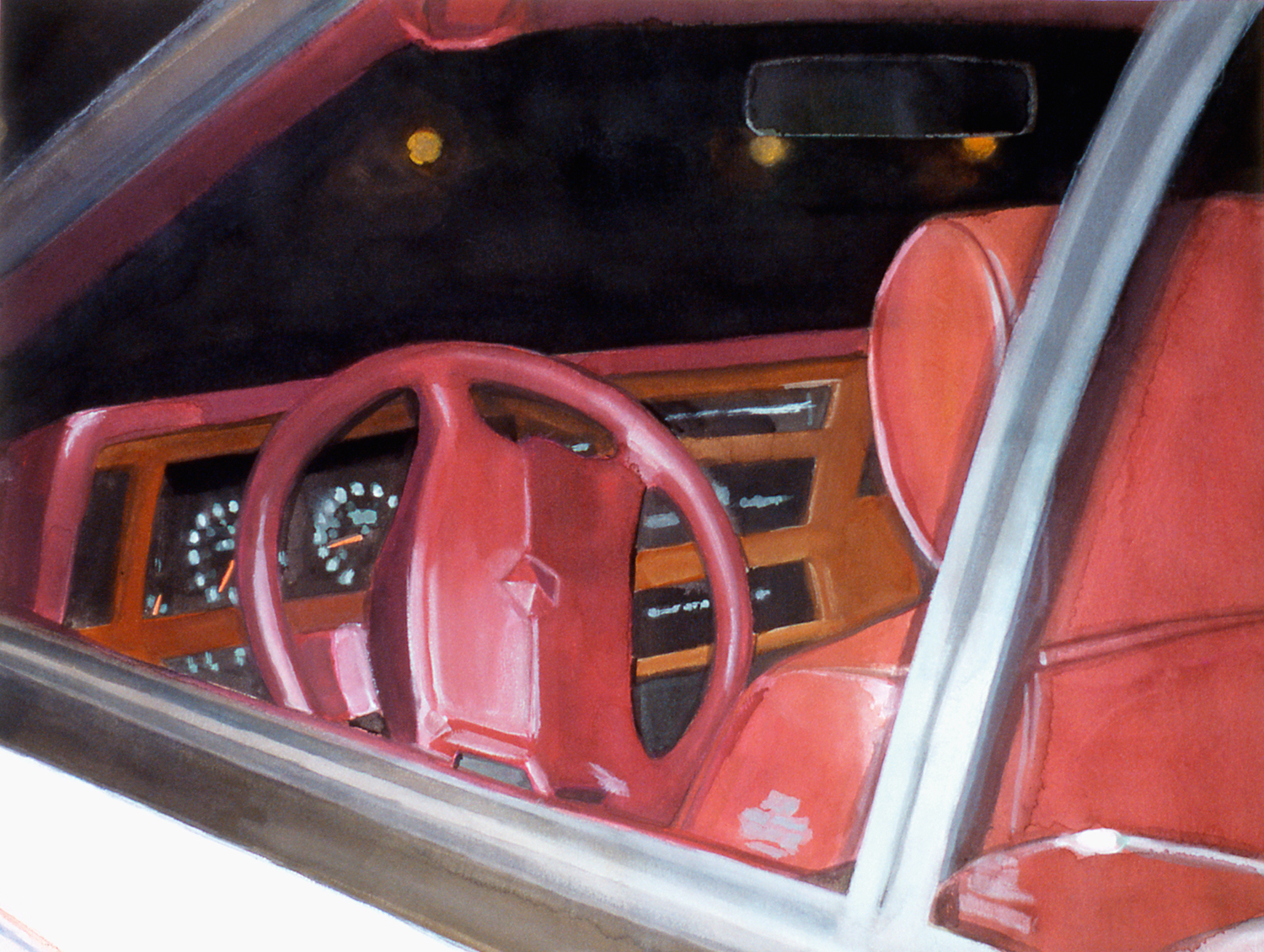 JEFF RIAN — Did that evolution relate specifically to your other works?
DIKE BLAIR — The gouaches functioned like drawings for the other work, which these days are sculptures, but there’s always a relationship. The gouaches are a kind of B-side to the rest, coming from a different direction. But when I hang the two bodies of work together, I prefer when both were made at roughly the same time.

JEFF RIAN — Separate but similar?
DIKE BLAIR — Until about 10 years ago, I kept media separate. The sculptures incorporated photographic images, never representational painting. Then suddenly I started to include gouaches in the sculptures, but on a different scale from the individual gouaches.

JEFF RIAN — Recently gouaches look like museum shots.
DIKE BLAIR — I spent almost a year at the American Academy in Rome, mostly painting images I’d shot on my first trip to Japan the year before. But there was something of an imperative, partially self-imposed, to make art that responded to Rome or Italy. I was stumped. I loved Italy, loved looking at everything, but it didn’t inspire me to paint. In part this was because I felt it was visually exhausted by centuries of artists. One day, my wife and I were in the Museo di Capodimonte in Naples, and I was taking a snapshot of Barbari’s portrait of Luca Pacioli. I thought to myself, “That’s what I should paint.” Like many tourists, one of my pleasures is to scan historical paintings. Also, after painting many windows, the idea of painting paintings made sense, though I haven’t done a lot of that, partly because I’m not so good at painting the carved wood, gold-leaf frames that surround many masterpieces. 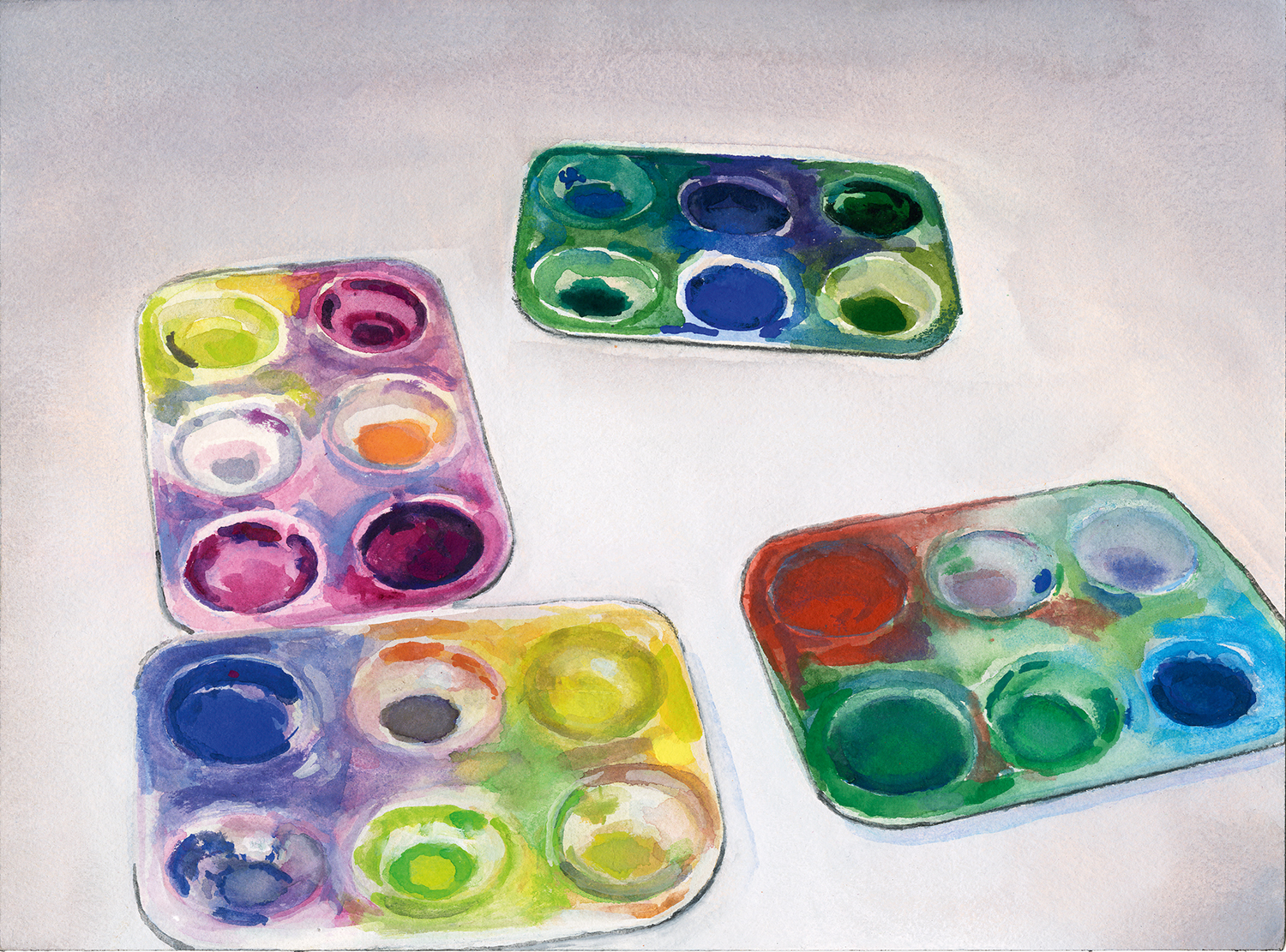 JEFF RIAN — To me, the gouaches recall travel experiences more than studio creations. Is that one of their differences from the sculptures?
DIKE BLAIR — Yes, although fairly recently I started a series of paintings of my studio floor. There’s a nice reflexivity in painting images of paint splattered on the floor. But when I look at the evolution of the gouaches, the subject matter tends to evolve in feeling, if not subject, from exterior things to more interior things. Gradually, I moved away from symbols, vanitas themes, and signifiers toward purer sensation. Looking at that evolution is like watching a stop-motion film of my brain’s aging process.

JEFF RIAN — How did the show at Karma, in New York City, come about?
DIKE BLAIR — Karma shows art and makes books but doesn’t represent artists. My friend Dan Colen brought Brendan Dugan, the owner of Karma, to my studio. Brendan is an intense and serious looker and a quick decision-maker. He liked the gouaches, pulled out his iPhone, and scheduled a show in April, about six weeks later. He also said he’d publish a book, which I was very pleased about but assumed would take longer. My 400-page book was done in time for the show!

JEFF RIAN — The Karma show spanned 30 years, with a lot of very impressive works. How was it for you?
DIKE BLAIR — Satisfying. I showed about 60 paintings, and the book shows most of them along with your essay. One interesting thing was to show the earliest paintings, which had been sitting on a shelf for 30 years. The frames fell apart when I picked them up. I’d constructed them with hot glue. Karma wanted to show them, so I got over my nervousness — I really didn’t know how to paint back then — stuck them back together, and included them in the show, and they were well received. It’s funny to think, to presume, that I actually know what my work is about and how I want it to be received. This was something of a lesson in how meaning gets formed in not entirely intentional ways. 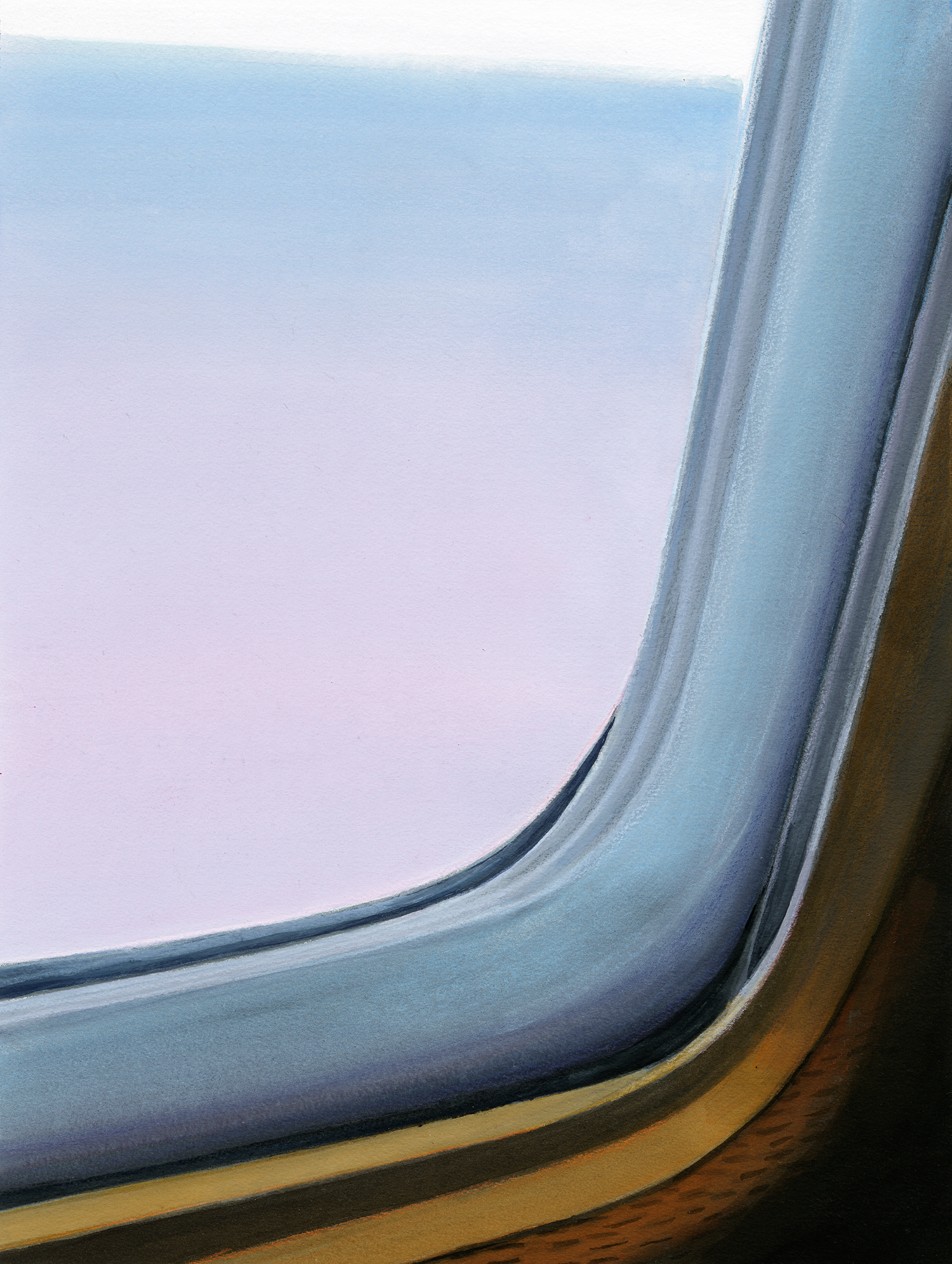 Untitled, 2005, gouache and pencil on paper