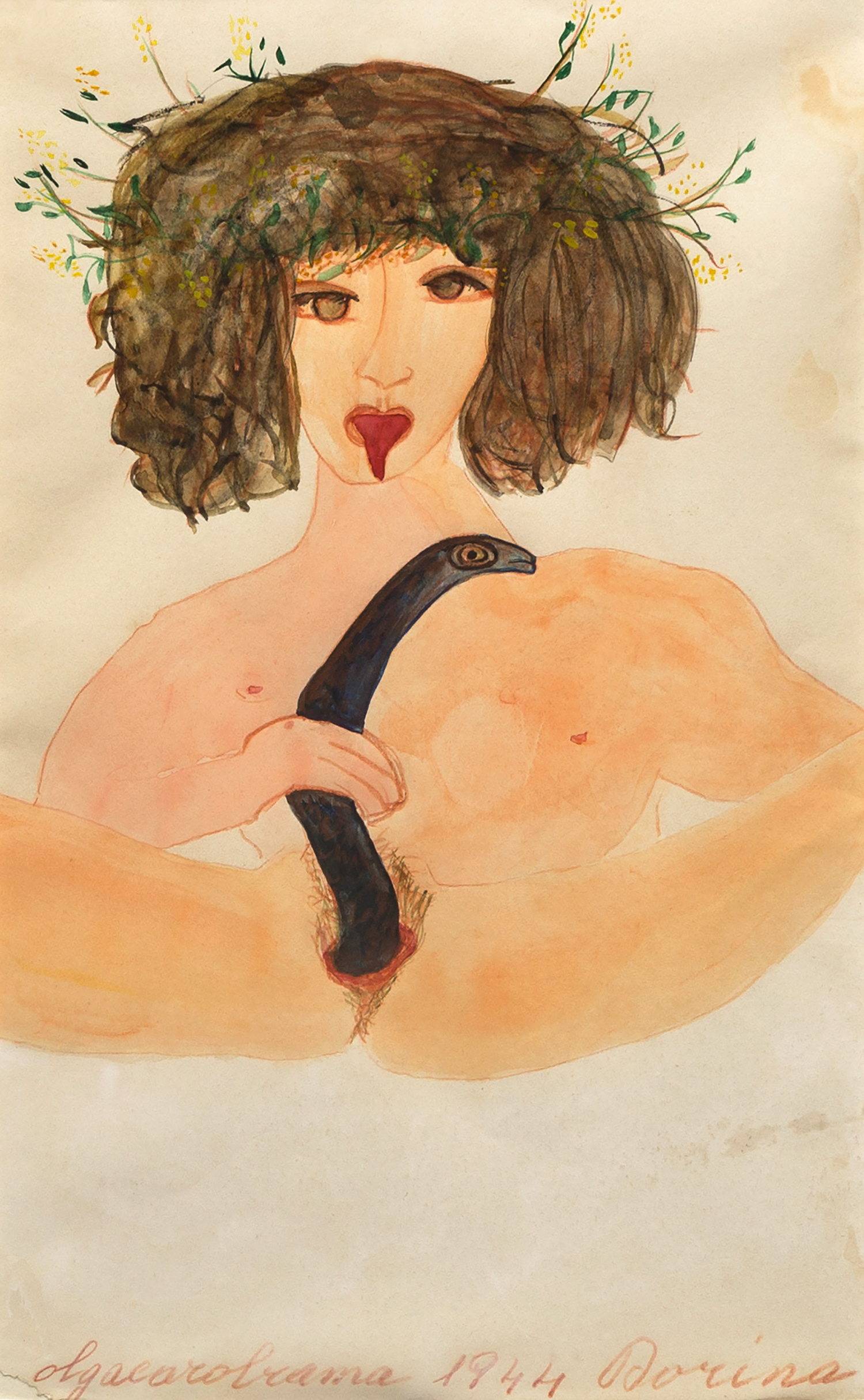 the passion according to Carol Rama

If we take Man Ray’s word for it — and he knew her well — Carol Rama, that major but long-ignored Italian artist, had at least seven different faces: a diversity of facets that her recent retrospective at Paris’s Musée d’Art Moderne sought to reveal. 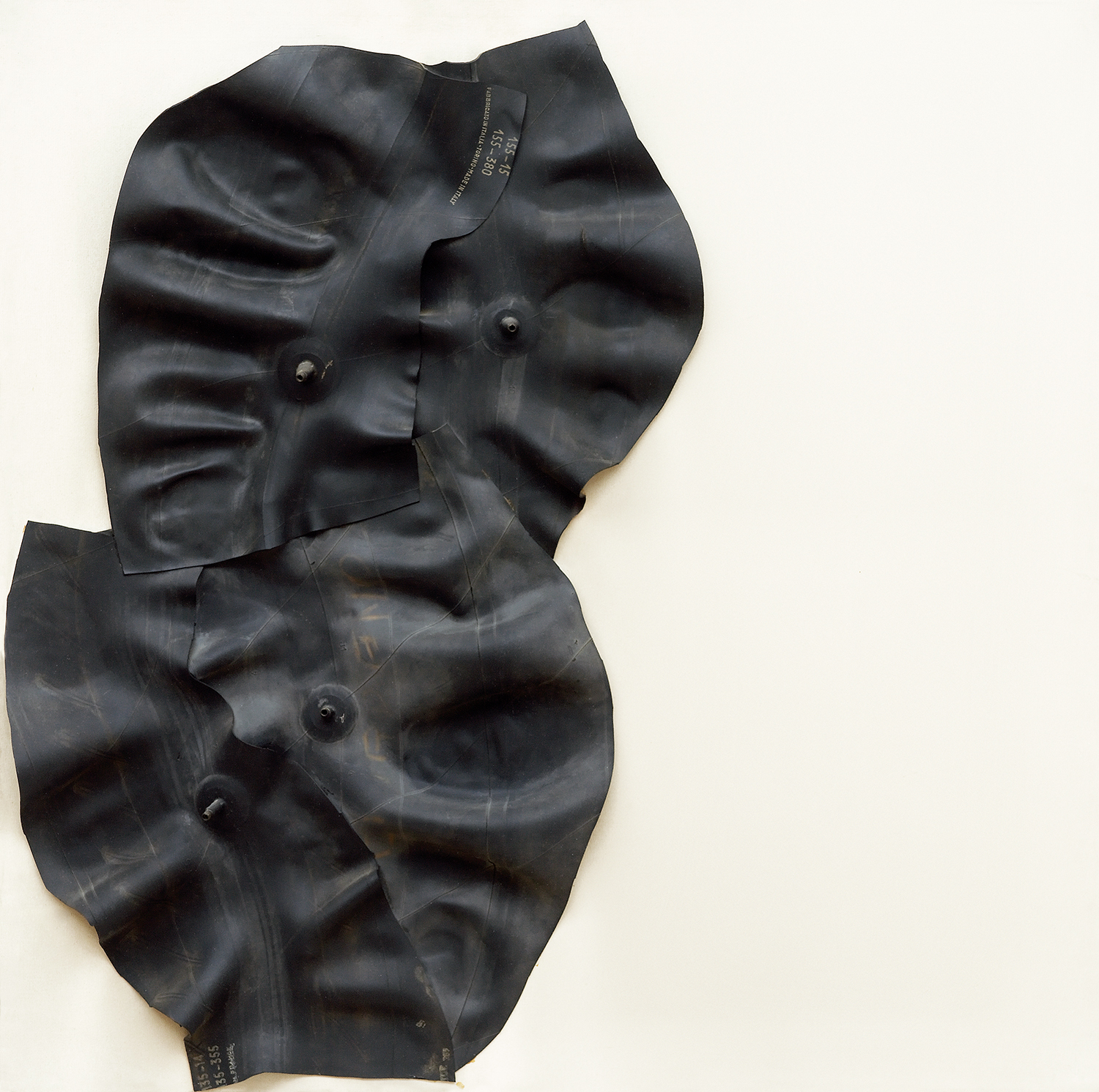 Born in 1918 in Turin, where at the age of 97 she still lives, Rama remains what is known as an “artist’s artist.” Lauded by the best of her peers, she is unknown to the general public, despite an oeuvre of unparalleled richness and power. It is still palpably subversive, a sort of anomaly that haunts us today, coming back like a repression.

Too often her works are interpreted as the avowed symptoms of a traumatic childhood. She began painting at the age of 15, with a mother who was institutionalized, a grandmother who was infirm, and a father who underwent financial ruin and committed suicide. For a long time, Rama seemed a double victim — of the art world and of her own family. But she defines herself as a “premeditated madwoman.” And, indeed, her practice is neither therapy art nor outsider art.

Though it makes her seem hysterical or obsessed, Carol Rama depicts amputated, fragmented, hyper-eroticized anatomies: “I choose these things — prostheses, false teeth, shaving brushes, razors because … they are victims of what they are. They have no chance of changing.” She did this in the 1930s, the era of fascism, within an ultra-macho, Catholic Italian society, and she has refused all her life to marry, have children, or step into line. 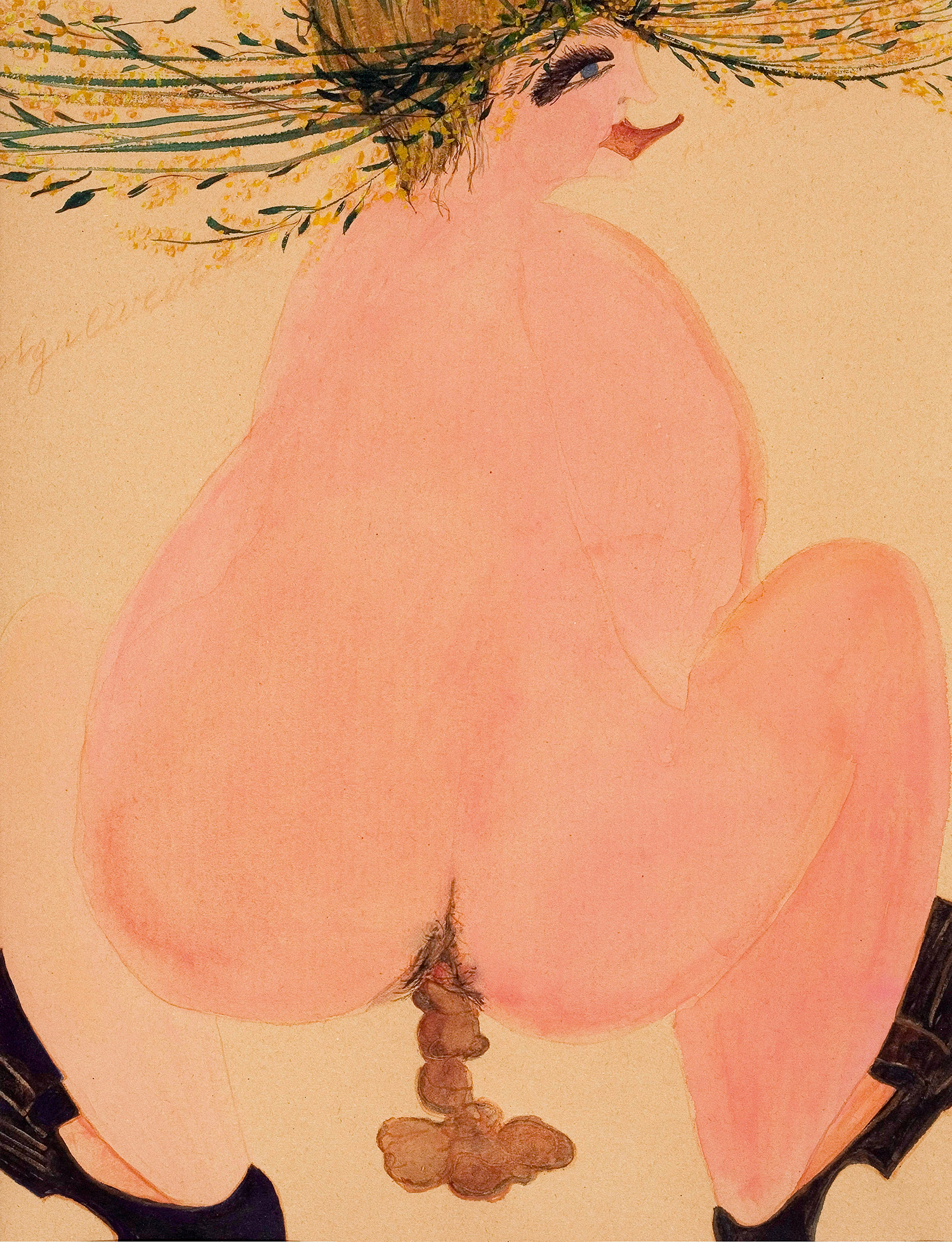 Like a chameleon, she has adopted a series of styles, but never belonged to any established current. By turns, her work evokes Expressionism, Surrealism, Art Concret, Art Informel, Nouveau Réalisme, Arte Povera, Soft Sculpture, and so on. Thus, she has invented nothing, steered clear of triumphalism and novelty, but by the same token has complicated any facile identification. Evader of categories, eternal resistance fighter, Rama continues to rankle. This almost animal camouflage strategy, equal parts defense and offense, is in fact what has guaranteed her an uncompromising liberty. The characters in her watercolors stick their tongues out. This gesture of defiance par excellence is also the sign of a body under the squeeze of hypocrisy’s proprieties. 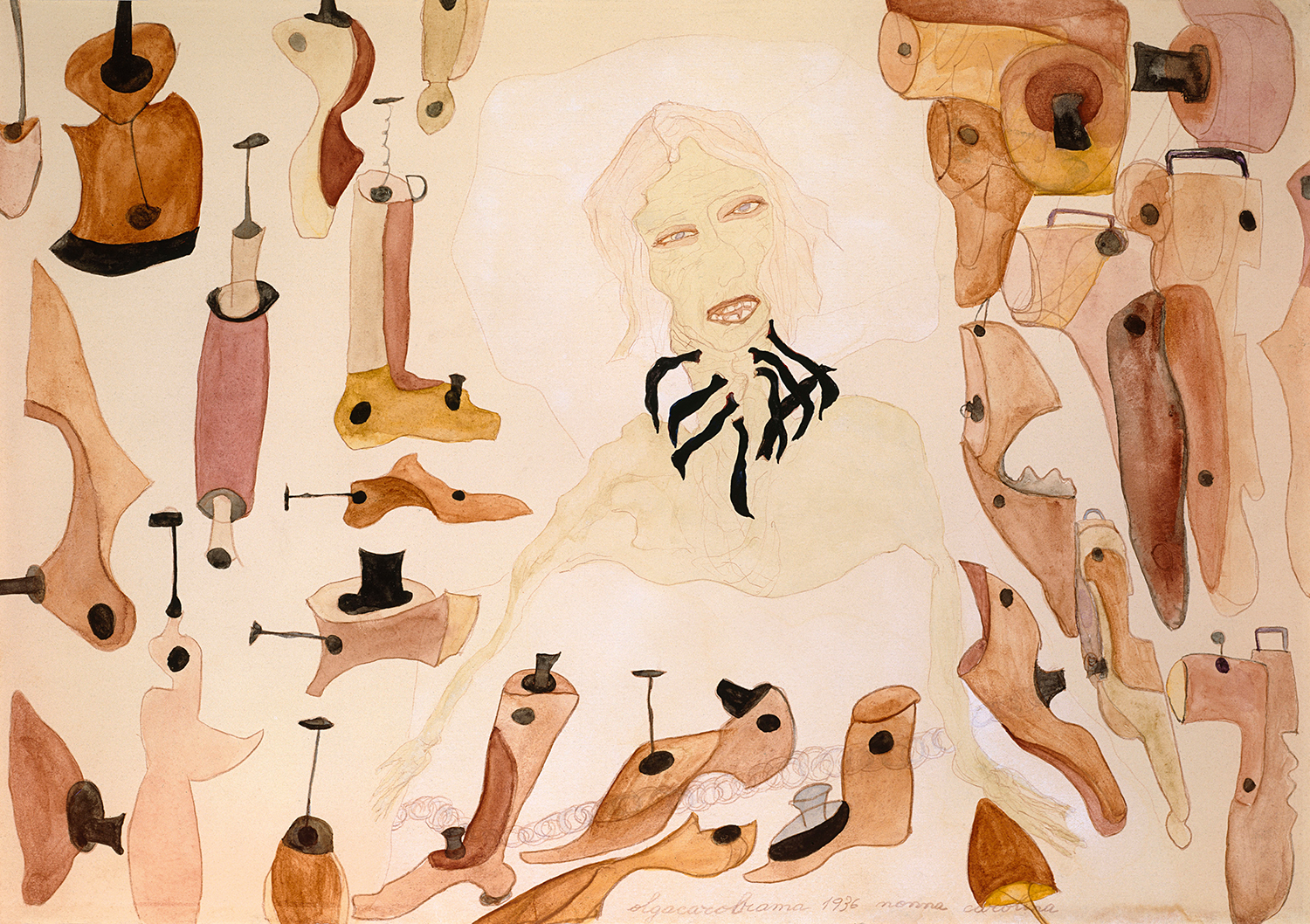 Nonna Carolina [Granny Carolina], 1936, watercolor on paper, 24 x 25 cm, owned by the Fondazione per l’Arte Moderna e Contemporanea-CRT, copyright photo Roberto Goffi, Turin Her women, more desirous than desirable, sit nude but high-heeled in proto-Cronenbergian wheelchairs. They part their legs, fully exposing their orifices. Fixing the observer with their eyes. Sometimes they defecate. When not sodomizing animals, her men (made-up like women) brandish (futuristic?) multi-penises, at once menacing and tempting. In retrospect, it is no surprise that she was severely censored in 1945, just after she painted her superb, blood-red canvas Masturbazione. A painting that remains forever wet.

Carol Rama then moved on to abstraction — a brief parenthesis “to withdraw from the excessive liberty for which [she] had been criticized.” But the body quickly reemerged, as if she could not keep it from sweating. In particular, with lines resembling cardiac pulsations or the staves of musical, sensorial scores.

In the ’60s, she began pasting select ready-made objects into what she calls Bricolages [Do-It-Yourself Jobs]. Taxidermy eyes and doll eyes (as well as claws, furs, etc.) pasted into the materiality of a painting, making blemishes or impacts, evoking blood, urine, sperm, napalm. At times bearing coded inscriptions, some of which reveal the mathematical formulas behind the atomic bomb. Attempting to depict the undepictable. The absurdity of science serving men against men. Revealing the indelible stains of the conflicts that she has witnessed.

But do not be misled: those eyes belong to the clairvoyant as well as to the voyeur, for the assemblages attest just as much to a political conscience as to a delight in pain. A pleasure that is contradictory, acknowledged, incorrect. As in Bataille. As in Luis Buñuel, whom she nonetheless claims to have discovered only in the ’80s.

Rama then left behind painting per se and began using inner tube tires from her father’s factory. Rubber and leather, the prized second skins of S&M before preferences shifted to latex. Sensual textures and patches/scars, often left visible, serve to pervert her otherwise abstract and geometric compositions.

In fact, if we compare one of her watercolors from the ’40s, depicting a woman with a snake emerging from her vagina, with her work of the ’70s, with their dangling inner tubes, a frontal proximity of form and meaning becomes evident. For Rama operates by self-reference, by reiteration, with an almost masturbatory back and forth motion. Sterile and non-straight, and undeniably coherent despite all the formal differences.

In sum, it is through gender theory that her oeuvre is today undergoing a radical illumination. Having from the very start developed its ideal in the androgynous body, her art can be considered povera-queer, twisted, strange, camp, insofar as it slips the shackles of “canons” in general — of stylistic genres and of gender identities and sexual roles determined in advance. At the same time, she invalidates the sham dualities that set the figurative against the abstract, madness against sanity, the animal against the human. Her most recent great series, La mucca pazza [The Mad Cow], is her latest provocation against moralizing convention. “I am the mad cow,” she said in the 2000s, celebrating the disinhibited animal more than the victim. Definitely more perturbing than perturbed, Carol Rama continues to sow trouble, rejecting even the conformism of rebellion.