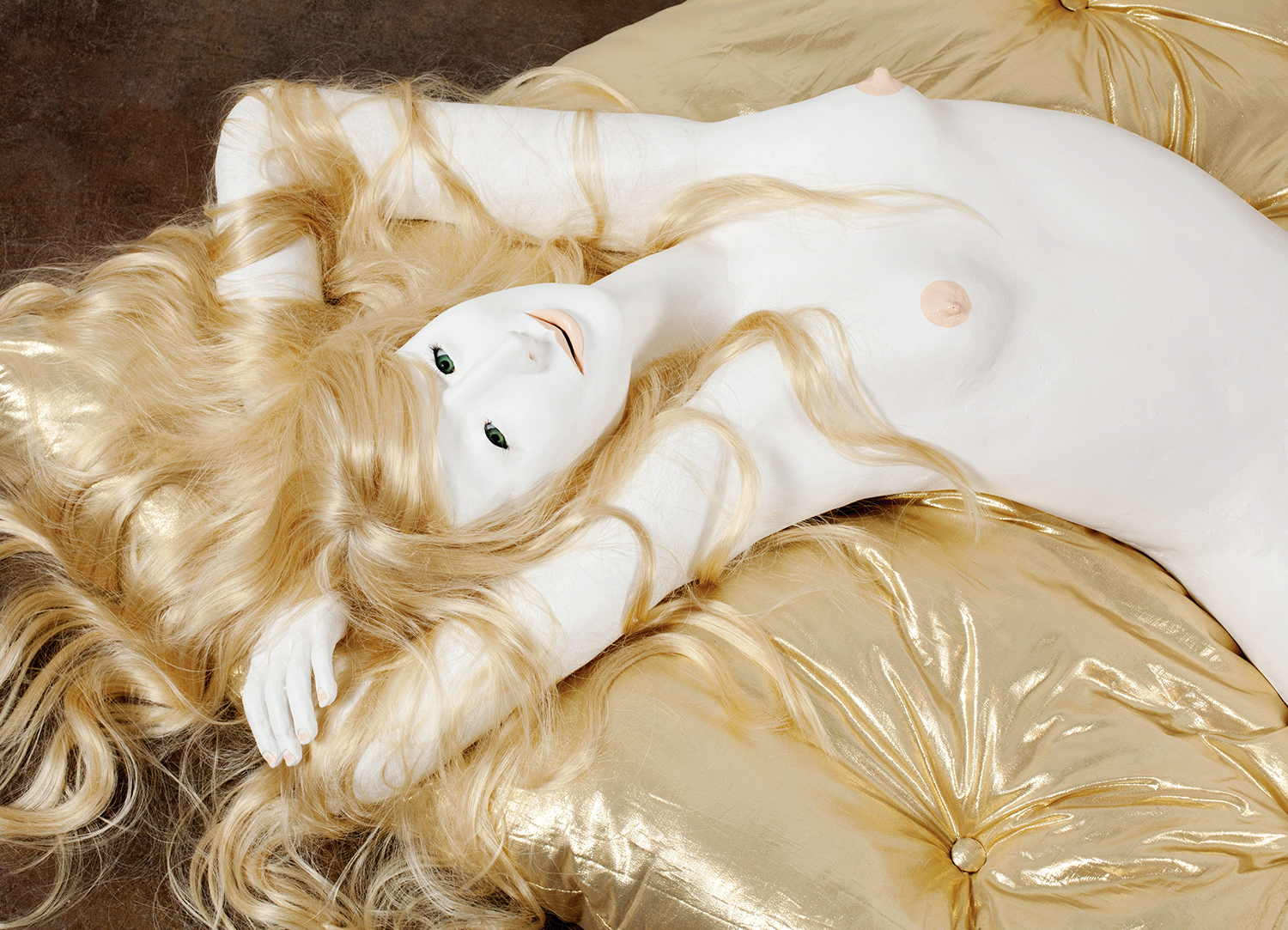 All images courtesy of the artist and Jack Hanley Gallery

MYRIAM BEN SALAH — You’ve had a wide range of day jobs. When did you realize you wanted to make art and be an artist?
ELIZABETH JAEGER — It was a process. I have a specific memory from elementary school of my classmate Alexandra drawing a picture of a tree. Her lines felt precise and poetic in a way that I craved. That was my first inkling, and I still have the drawing. From there, I started to draw classmates’ faces. Drawing felt direct in a way that language didn’t, and I latched onto it. Then there was Marion Jannot, an amazing artist and totally overqualified high school teacher. She really pushed us to take what we were making seriously, told us that your whole practice you only make one work, over and over, but you spend your whole life figuring out what it is.

MYRIAM BEN SALAH — You still keep up with a lot of parallel activities, like Peradam, your publishing company, and the classes you teach at the Bruce High Quality Foundation University free experimental art school. How does that blend with your art making, and what kind of balance comes from it?
ELIZABETH JAEGER — I consider publishing and teaching as separate activities that help me equilibrate my art practice. Helping others helps me feel like I’m keeping the resources flowing. Publishing allows Sam [Cate-Gumpert] and me to share our design, hustle, and print skills with artists whose work we admire. Teaching is a way to share the connections I’ve made and the things I’ve learned, having done this whole art thing for a while. The Bruce class, for instance, is heavily made up of visiting artists, people I know from working in and around the art world that I think have something valuable to share. 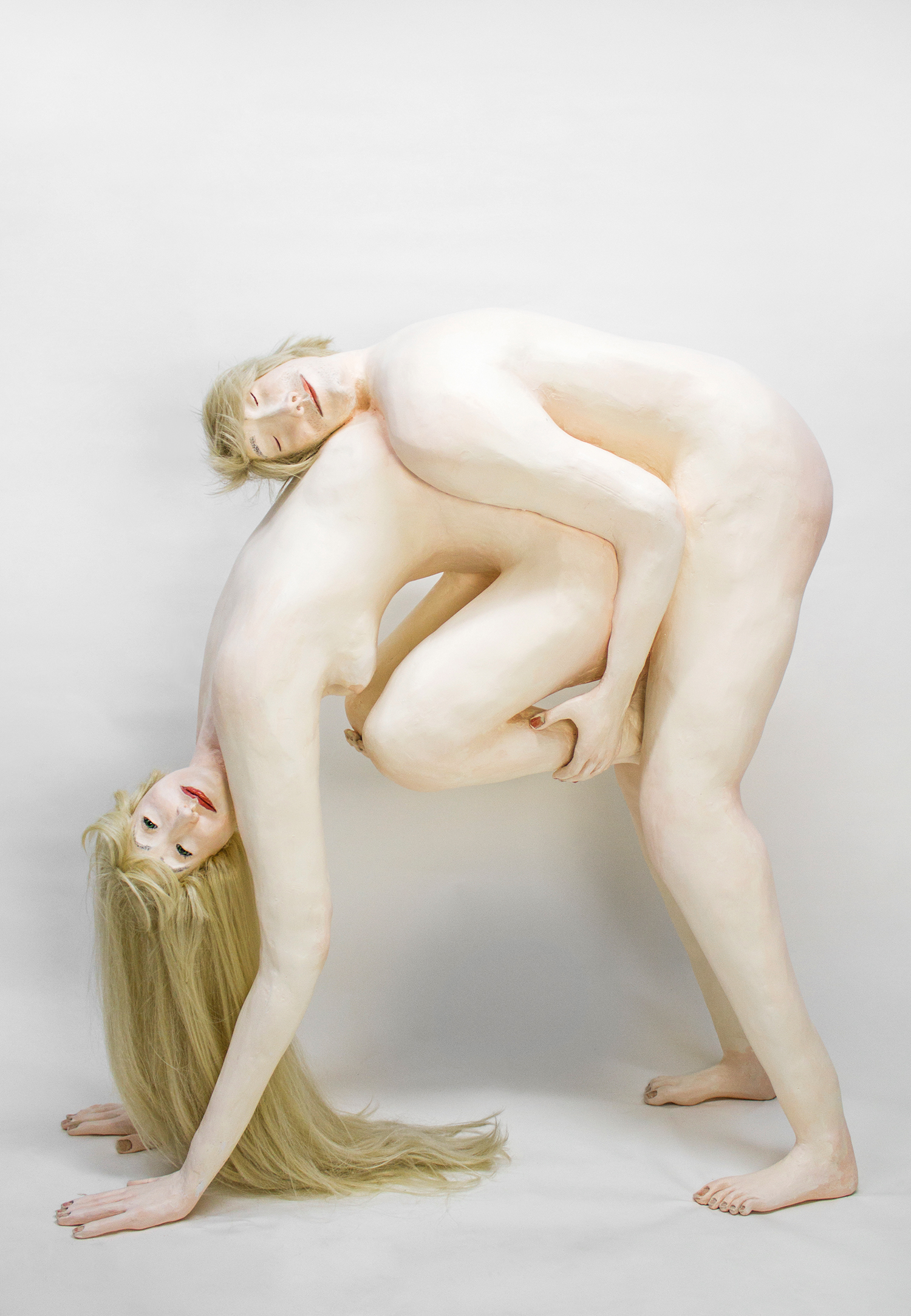 Maybe We Die So The Love Doesn’t Have To, 2015, Hydrocal, latex paint, and hair

MYRIAM BEN SALAH — Your activities and the big communal Bushwick house that you share with other creatives reminds me of the somewhat outdated idea of “artistic communities,” where artists grew and worked together. I feel like art making is getting more and more individualistic. Are you nostalgic for that era, which you didn’t experience?
ELIZABETH JAEGER — Not really. I think all of us would prefer to have our own places. The house is a way to live inexpensively in New York City with the most amount of space. Most of us have studios in the basement included in our rent. The lackluster nature of our home allows us the luxury of time to work on what we care about.

MYRIAM BEN SALAH — What brought you to New York, and what’s your relationship with the city?
ELIZABETH JAEGER — My friends and wanting to get the fuck out of Portland. I love New York, but it’s also hard to live here. So much energy, but also so many zonk emotions you catch in public. People are stressed here, sometimes because they’re overworked, sometimes just unnecessarily, and you breathe it; you feel it get inside of you. I try to escape a lot, and then it’s always nice to come back.

MYRIAM BEN SALAH — I think the first time we met was in Paris. You have a special relation to France, don’t you?
ELIZABETH JAEGER — I grew up learning French at school but not at home, so it’s always been kind of a relished secret language for me. French also has a particular way of expressing time, ideas, and emotions that I relate to more than how we generally express ourselves in English. But I’ve never felt part of France or the United States, just kind of a stranger awkwardly drifting between the two.

MYRIAM BEN SALAH — Your early sculptures are marked by elongated female figures and an uncanny depiction of the human body: often naked but in a non-sexual way, swinging between a dark sensuality and a goofy attitude, appearing in an unsettling, life-size scale that enforces confrontation. What was it all about?
ELIZABETH JAEGER — The idea started when I was stuck in Nancy, France, with no studio and no way to bring anything I made back with me. To compensate, I did thousands of drawings and tried to do some “performances” from them, which failed miserably. I couldn’t watch myself. The idea for the sculptures came from wanting to find someone to do something for me, but
I was too shy to get into choreography. The sculptures are like stand-ins for very long, probably boring performances. They’re directly lifted from my doodles and drawings — drawings of things I see that are complicated and convoluted, things that are and are not simultaneously.

MYRIAM BEN SALAH — Your sculptures can also be seen as catalyzers for gender power dynamics. In that context, do you consider yourself a feminist or, should I say, “postfeminist”?
ELIZABETH JAEGER — I consider myself a woman who is incapable of putting up with bullshit and takes pleasure in pointing it out. 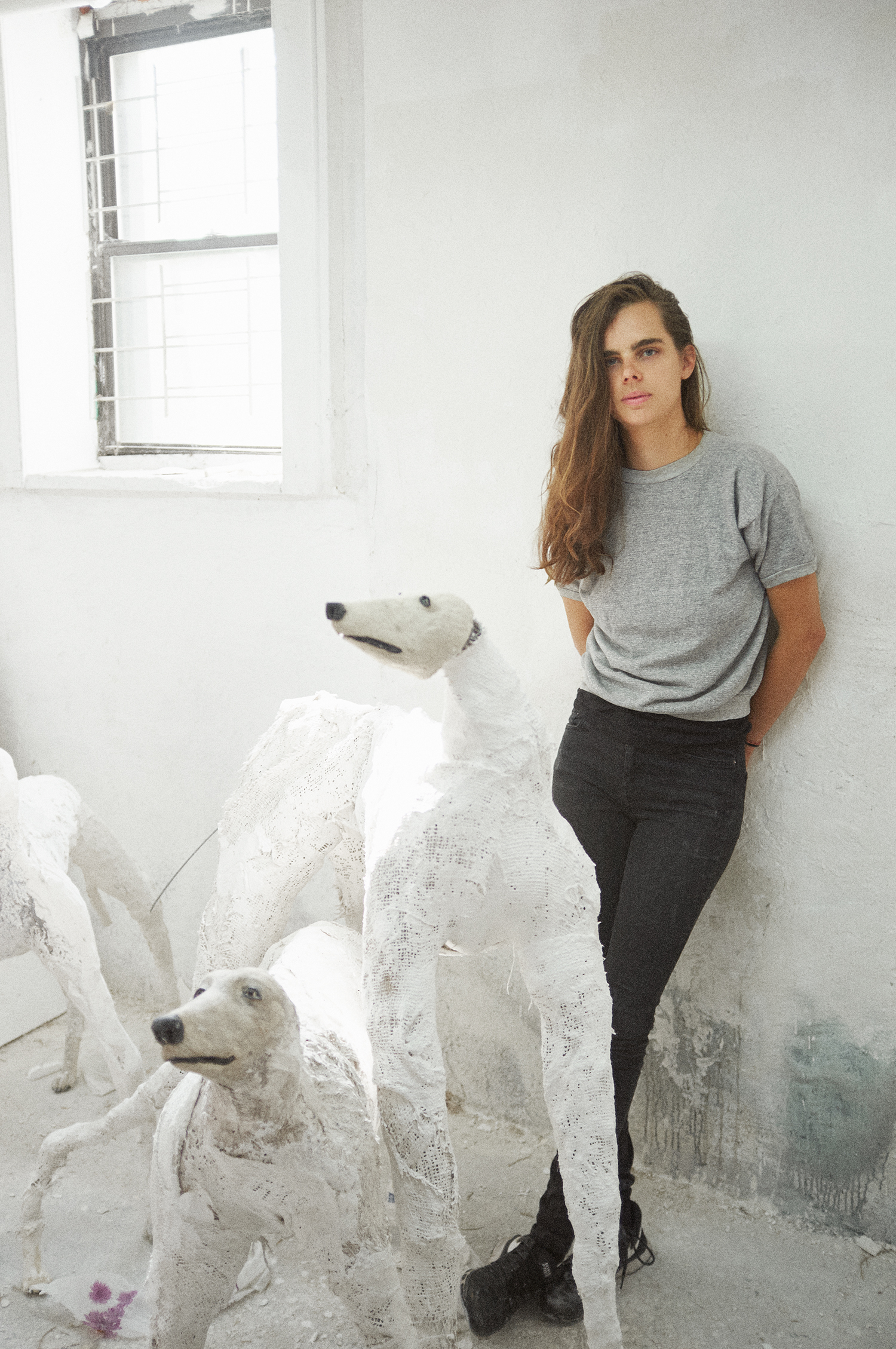 MYRIAM BEN SALAH — You switched recently to non-figurative sculptures. How and why did you make this transition?
ELIZABETH JAEGER — I think of the furniture and medical structures as figurative as well. My friend died, and I had no way to talk about accepting absence. Furniture becomes a cast of the time we’ve spent with it. I had to remove the figure to think about what it meant to lose someone but still feel them around.

MYRIAM BEN SALAH — Once you told me that you’d rather destroy your work than have it lie in storage. Do you have a difficult relationship with your pieces? Is there some sort of love/hate thing going on?
ELIZABETH JAEGER — It’s not so much my relationship with the work as my relationship with expectation and vanity. It scares me that artists hoard their own work in hopes of their big break. I’m more on the side of making it for a reason and either keeping it around to think about or getting it the hell out of my life.

MYRIAM BEN SALAH — When someone asks me about your work, I often describe you as the brainchild of a fictitious and unlikely union between Robert Gober, Louise Bourgeois, and Andra Ursuta, probably because of that subtle sense of disquiet that you bring to domestic and familiar environments and because of the way you deal with women. Who would be your actual references?
ELIZABETH JAEGER — Formatively, Louise Bourgeois, Richard Tuttle, Ann Hamilton, Christian Boltanski, Eva Hesse, Franz West, Kiki Smith and Anselm Kiefer, all of whom I was obsessed with as a teenager. Now, Andra is definitely my favorite artist working downtown. And I cried, unexpectedly, at Robert Gober’s MoMA show.

MYRIAM BEN SALAH — What about Surrealism?
ELIZABETH JAEGER — Surrealist paintings I’ve always thought of as a little too didactic to relate to, and as being implicitly related to the binaries of language. Magritte, however, holds a special place for me with Le Viol (Rape), from 1945. It totally ruined my perception of my own changing body as a teenager. I couldn’t look in the mirror naked without seeing a similar creepy pube face. That said, Surrealism as a psychological dream state fascinates me. The idea that your reality is spliced with your own knowledge and imagination, and that your senses are replete with your own subjective psychological baggage — basically that perception is always surreal. This I think about constantly.

MYRIAM BEN SALAH — Do you feel left out from the so-called “post-Internet” generation?
ELIZABETH JAEGER — Left out? LOL #no. 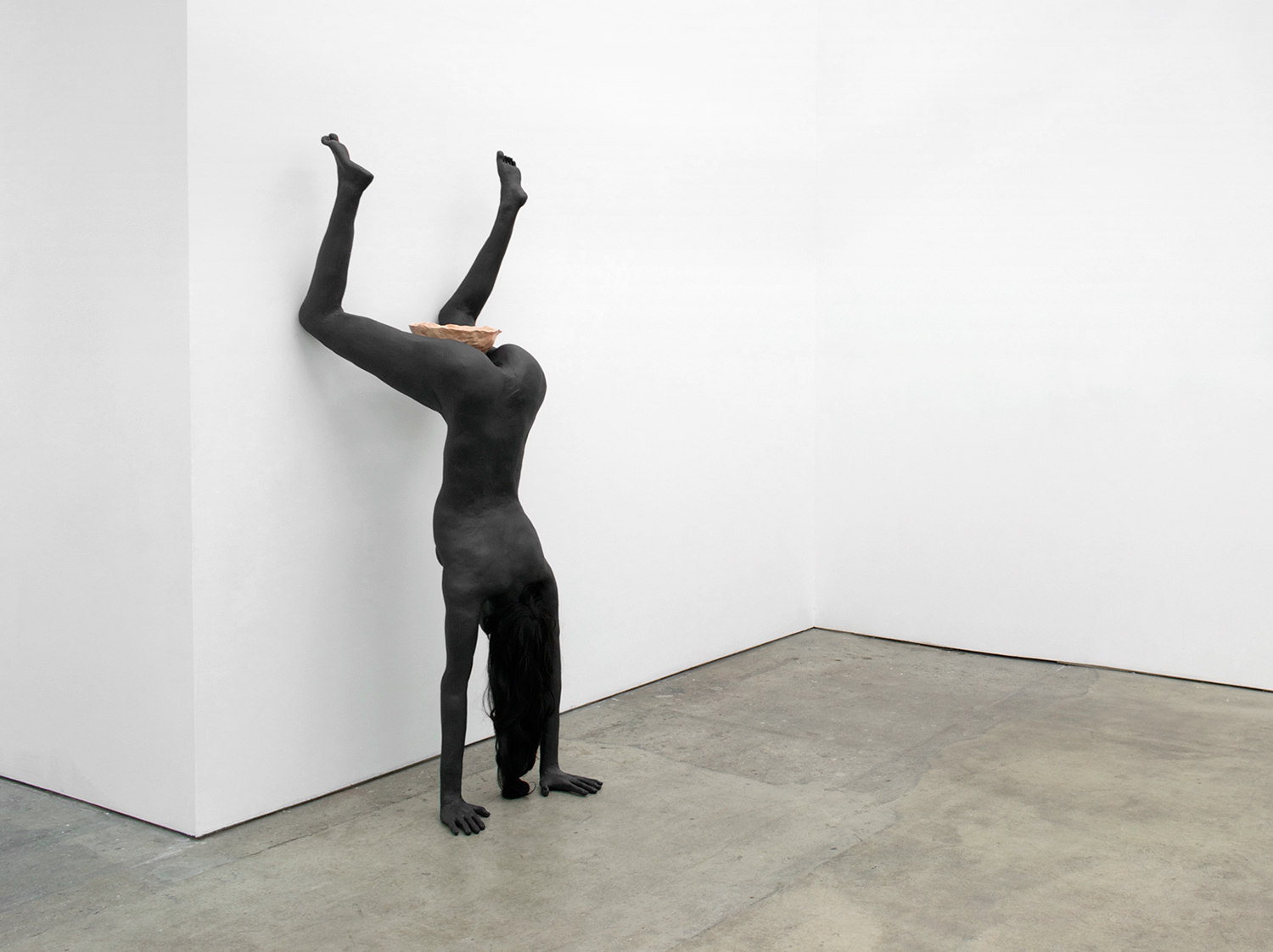