what will we eat?

What does the future of food entail in an era of dwindling resources? And what are the prospects for an exhausted terrain that has to meet the caloric needs of 10 billion people by the year 2050? To sketch out speculative agricultural futures, we must examine the paradoxical role of technology in current food systems: technology is a means to increase efficiency while simultaneously provoking ecological devastation. Sections of the world’s land most suited to cultivation are expected to experience drastic climate change, affecting production and jeopardizing currently stable food sources. With the rise of biotechnology and genetic engineering, the line between the natural and the fabricated becomes increasingly blurred. Industrial agriculture perpetuates desecration despite its idealized intent to satisfy an ever-expanding population. The challenge of a hyper-populated globe with limited resources is a quandary at the heart of our survival.

Contemporary agriculture’s ecological impact threatens global food systems from a multitude of angles, including emissions, waste, and soil devastation. In addition, the predominant use of single-crop cultivation provokes soil erosion and often relies heavily on agrochemicals. The dystopia of monoculture prevails, in a world that emphasizes speed and convenience, as the means to satisfy an exponentially growing population. Almost 90% of arable land is dedicated to cultivation, and over half of the world’s freshwater is reserved for food production. Yet one-third of the world’s food goes to waste, a statistic further exacerbated by the Covid-19 pandemic. Why is such an astronomical portion of grown food not consumed?

The food industry employs innovative strategies to fabricate alternatives to the C02-dense cattle industry; these include lab-grown meat, also known as in-vitro meat, which is gaining popularity globally. Lab-grown meat is a form of cellular agriculture, in which animal cells are used to produce tissue in bioreactors. The manufacturing process uses expensive scaffolding apparatuses, upon which the cells are grown, often using collagen or gelatin. The first consumer-ready products have already entered the market, with Singapore in 2020 approving the sale of lab-grown chicken sourced from a San Francisco-based start-up. A few months ago, Singapore made the product available for home delivery, making it the first country in the world to publicly consume lab-grown meat.

The world’s largest meat-processing company, JBS, headquartered in Brazil, recently established a research facility in biotechnology to cultivate protein, investing over $100 million and purchasing smaller companies to form a potent conglomerate. The lab-grown meat industry is expected to constitute 30% of the global meat market in the next 20 years, making the race to find affordable modes of production all the more enticing. But how feasible is it in terms of sustainability, and how accessible will the products be? Lab-grown meat demands far fewer natural resources compared with conventional production, eliminating interaction with land, water, and feed. Yet if the current manufacturing methodologies continue, lab-grown meat will cater solely to the global elite, who can afford this costly and supposedly ethical alternative.

Another alternative form of agriculture that is gaining widespread attention is controlled-environment and vertical farming. Faced with increasingly cramped cities, scientists have started to explore the possibilities of vertical growth. The decline of arable land and an increase in soil degradation have sparked a global movement in controlled-environment agriculture, gaining popularity in megacities such as Tokyo and Shanghai. Hydroponics and aeroponics offer means of cultivation that omit soil through the use of mineral nutrient solutions administered into the roots of plants. But if soil is an increasingly rare resource, is sans-soil agriculture the most fruitful option? Vertical farming enthusiasts say that these systems will permit stretches of land to return to natural landscapes and nurture a period of restoration. Urban indoor farming is also believed to be a sustainable food source, producing higher yields and reducing transport emissions.

Theoretically, hydroponics and aeroponics are an efficient alternative to soil-based farming; however, their accessibility and sustainability still need to be explored. There is also a problem with the energy emissions of these systems, which include the use of high-pressure sodium lamps, and the possibly exorbitant costs of setup and maintenance. Controlled environments also inhibit the resiliency of normal plants and their ability to develop a buffer capacity against variables in the environment. Controlled-environment agriculture should not be rejected, however, if it allows a stable food supply. Solar photovoltaic systems should also be implemented to generate renewable sources of power. Certain companies have started exploring dimmable LED lights that reduce emissions. These ameliorations, along with government subsidies aimed at shifting from monocultures to new technologies, could offer a form of farming that could sufficiently address future needs.

These modes of production are not limited to terrestrial production. Seven years ago, NASA inaugurated its Veg-01 program, which grows edible crops such as lettuces in orbit, often employing vertical structures. These controlled-environment crops offer insight into how to cultivate edible matter in extreme conditions. Such conditions, though not currently a reality, could mirror some of the speculative systems and apparatuses conjured in early science fiction. The 1952 book The Space Merchants alluded to both controlled-environment agriculture and vertical farming, depicting a scintillating tower-like structure that propagated chlorella and was uncanny in its similarity to contemporary vertical gardens.

In the wake of these developments, will the future involve an ecological restoration of Earth? Practices such as controlled-environment agriculture and lab-grown meat intend to maximize efficiency and sustainability, yet both need to become accessible to all echelons of society. And does the future of food biotechnology include a way to salvage natural systems? A glimmer on the horizon beckons a return to organic systems and small-scale farming; however, as resources become increasingly limited, the feasibility of such practices on a global scale is challenged. Perhaps the answer lies in technology, but the inherent mistrust of technological monopolization must be resolved. These burgeoning systems require further research and broad accessibility to ensure a stable food source for the future. Paramount is reestablishing technology’s role as a tool for humanity rather than a dystopian and omnipresent regime dominating agriculture. 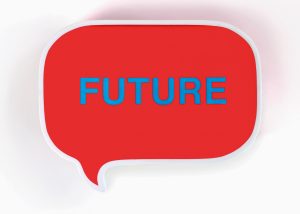